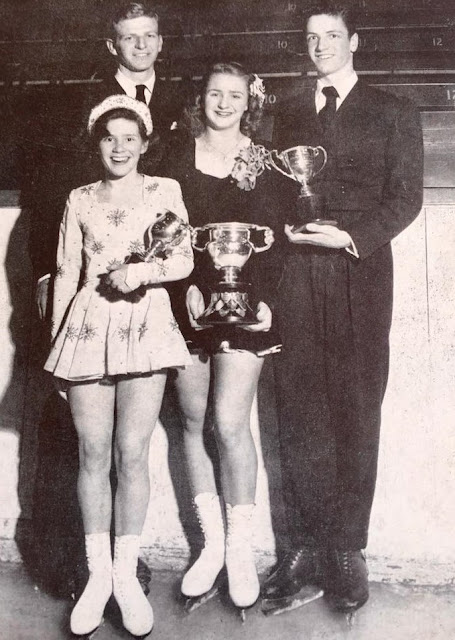 The disappearance of a U.S. Air Force C-54 transport plane and its thirty-six passengers somewhere over the Yukon was front page news. Eileen Barton had just recorded her hit song "If I Knew You Were Comin' I'd've Baked A Cake" and after years of being creative on the ration, Canadians could finally afford the ingredients to bake their favourite cakes thanks to the post-World War II economic boom in Canada.


The first Polaroid camera had just been manufactured but every young skater in Canada just wanted a Barbara Ann Scott doll under their Christmas tree. The year was 1950, and from February 2 to 4, Canada's best figure skaters gathered at The Winter Club of St. Catharines to compete in the Canadian Figure Skating Championships. 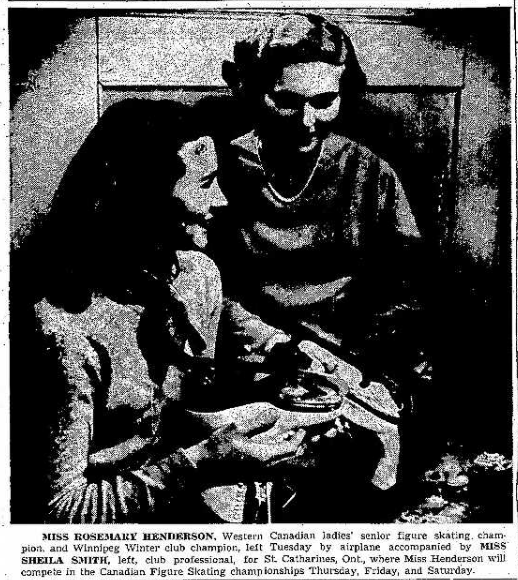 The event marked the first and only time The Garden City in the Niagara region played host to the Canadian Championships. It was also the first time a new scoring system for school figures was used, which had been tested at the North American Championships the year prior. Previously scores were announced after each compulsory figure, but under this system no scores were released until after all skaters finished. The reason for this, explained referee Donald B. Cruikshank, was to eliminate "any possible disadvantage to the first skaters... and give judges a chance to get an over-all picture in their marking." Some skaters and coaches undoubtedly had their own opinions about the move to embrace Closed Marking, potentially viewing it as a step backward. Now that we have some background, let's take a look back at how things played out on the ice! 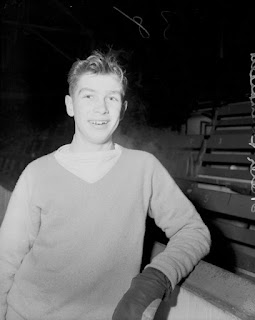 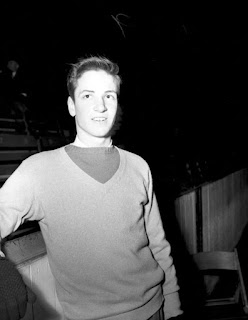 In the junior men's event, Toronto's Peter Firstbrook claimed the gold medal which had eluded him the year prior at the Canadians in Ottawa. Peter Dunfield finished second - winning his first of several medals at the Championships. 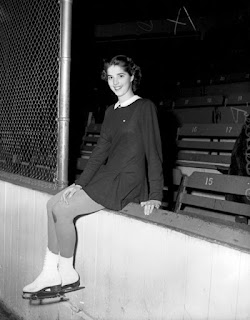 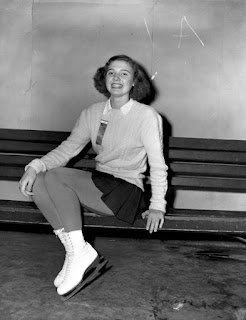 Thirteen year old Barbara Gratton built upon an early lead in the school figures to win the junior women's event. Her older sister Elizabeth moved up from fourth to take the silver, while Dawn Steckley of Ottawa dropped off the podium entirely. Erica Batchelor, then skating out of Calgary, finished off the podium as well. Just three years later she would become the European Silver Medallist, representing the UK. 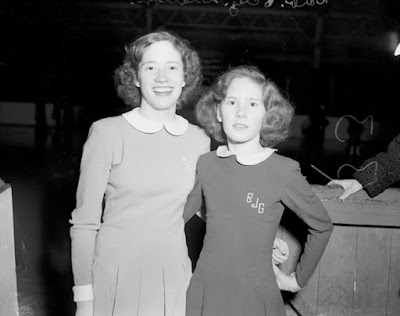 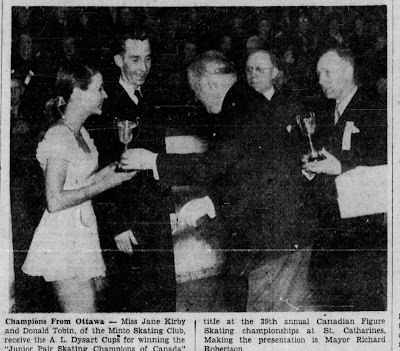 Jane Kirby and Donald Tobin of Ottawa won the junior pairs. Kirby was third in junior women's, while Tobin medalled in the senior men's event and all three dance events. In those days, it wasn't a rarity for competitors to skate in multiple events at the national level. It was the norm.

When Toronto's Marlene Smith and Donald Gilchrist had won the senior pairs event the year prior in Ottawa, they had faced stiff opposition from two other teams. In St. Catharines, they were the only team entered. According to the CFSA's rules, they still had to skate 'to a standard' and earn three quarters of the possible total points in order to win the title. All five judges gave them a score of more than eighty percent. Smith and Gilchrist were engaged at the time of their win.

There were three separate dance events in 1950 - the Tenstep, Waltz and Silver Dance competition. The same five couples competed in the trio of contests, with Joy Forsyth and William de Nance Jr. of taking the Tenstep and Frances Dafoe and Norris Bowden the Waltz. After all five couples skated the Waltz, Rocker Foxtrot, Paso Doble and Tenstep in Silver Dance, the judges thought several of the teams so close in ability that they required them to come back for a reskate. After the marks were tallied, Ottawa's Pierrette Paquin and Donald Tobin were declared the victors. Of mention were the two teams that finished fourth and fifth in both events. Oshawa's Geraldine Fenton would go on to become a three time World Medallist, while her partner Dick McLaughlin would later become the CFSA's President. June Hockley skated with Roger Wickson, the defending Canadian Champion in men's singles. Two months after the Canadians, the first CFSA Gold Dance tests were held in Toronto. Paquin and de Nance took turns judging and being judged. 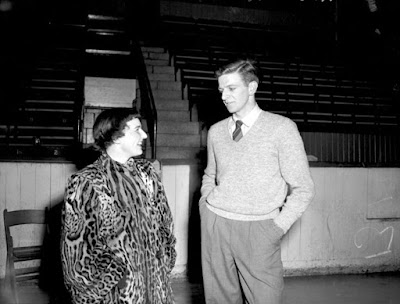 In the men's school figures, twenty-one year old Bill Lewis, a commerce student at the University Of Washington who hailed from New Westminster, British Columbia managed to defeat the defending Canadian Champion, twenty-two year old Roger Wickson, a student at the University Of British Columbia from Vancouver. Spectators were on the edge of their seat considering the possibility of an upset in the free skate. It wasn't to be. Wickson rebounded with a fine performance, and Lewis dropped to third behind Donald Tobin of Ottawa. It was the first time ever that two skaters from Western Canada had placed in the top three in the senior men's event at the Canadian Championships. Though Wickson and Lewis repeated their top three result in 1951, it would be almost three decades before two Western Canadian men would be on the senior podium together again. 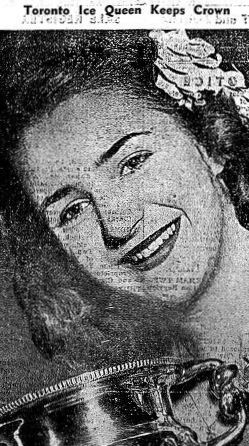 Though she was only nineteen, Toronto's Suzanne Morrow had already won medals at the Winter Olympic Games, World, North American and Canadian Championships in pairs skating. After her partner Wally Distelmeyer's retirement in 1948, she had focused her attention solely on singles skating and won the 1949 Canadian women's title in Ottawa. Much like her predecessor Barbara Ann Scott, Morrow amassed a fifteen point lead in the school figures, making it next to impossible for her rivals to catch up - competent free skaters or not. Clad in a black sequined dress and tiara, she was the toast of St. Kitts with her performance set to the strains of Hungarian composer Emmerich Kálmán.

Marlene Smith, a tall blonde from Niagara Falls, wore a fuchsia dress and skated to a medley of music by Viennese composer Fritz Kreisler to take the silver. Her success was remarkable in that she was treated throughout the event for a particularly nasty case of influenza. The bronze went to seventeen year old Vevi Smith of Toronto, junior champion of Canada in 1947. 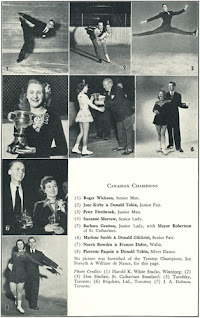 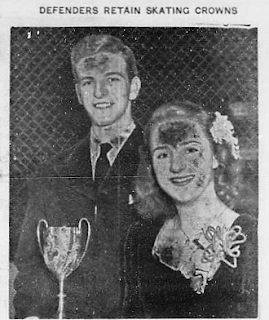 Behind the scenes in St. Catharines, progress was being made. In her book "Figure Skating History: The Evolution Of Dance On Ice", Lynn Copley-Graves recalled, "The CFSA announced a competition to design new medals... [and] the professionals met with members of the American Skaters Guild and chose a representative to attend the Pro Skaters Guild meetings in Washington during the U.S. Championships." Following the competition, CFSA President Alfred H. Williams of Calgary announced that Canada would sponsor Morrow, Wickson, Smith and Gilchrist to compete at Worlds in London. He told a reporter, "This year's champions have proved they are of better quality than in previous championships. Some of them, especially Suzanne, are of word class, and I expect they will give some stiff opposition to strong opponents in the World Championships." 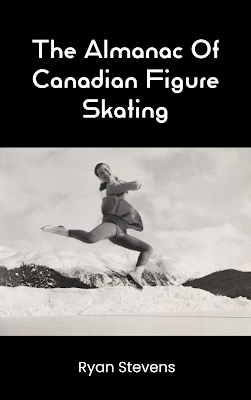 If you enjoyed today's blog and would like to learn a little more about Canadian figure skating in the 1950's and the skaters that were mentioned, now is a fabulous time to get yourself a copy of "The Almanac of Canadian Figure Skating". This fascinating reference book is available in hard cover, paperback and Kindle E-Book editions on Amazon. Click here to order the book today!

Skate Guard is a blog dedicated to preserving the rich, colourful and fascinating history of figure skating. Over ten years, the blog has featured over a thousand free articles covering all aspects of the sport's history, as well as four compelling in-depth features. To read the latest articles, follow the blog on Facebook, Twitter, Pinterest and YouTube. If you enjoy Skate Guard, please show your support for this archive by ordering a copy of figure skating reference books "The Almanac of Canadian Figure Skating", "Technical Merit: A History of Figure Skating Jumps" and "A Bibliography of Figure Skating": https://skateguard1.blogspot.com/p/buy-book.html.
Posted by Skate Guard Blog at January 09, 2023
Email ThisBlogThis!Share to TwitterShare to FacebookShare to Pinterest
Newer Post Older Post Home