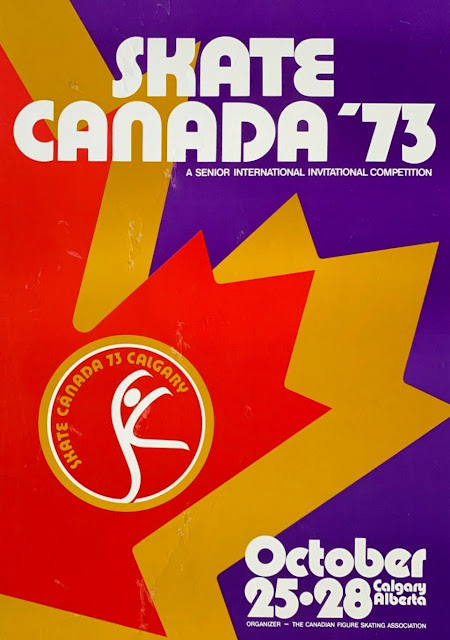 The first Skate Canada was held from October 25 to 28, 1973 at the Stampede Corral in Calgary. It featured competitions in only three disciplines - men's and women's singles and ice dancing. Pairs skating, which Blundun once called "kick boxing on skates", wasn't included. The CFSA invited nine countries (Austria, Czechoslovakia, East Germany, France, Great Britain, Japan, the Soviet Union, the United States and West Germany) to send one competitor in each discipline. As hosts, the CFSA decided, Canada would have three entries in each discipline. With a budget of less than five thousand, nine hundred dollars, the CFSA absorbed the travel and lodging costs of all competitors, team managers, referees and judges the first year Skate Canada was held. 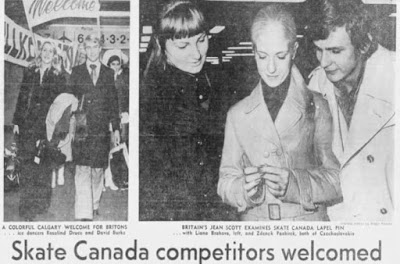 George J. Blundun, who'd vowed to make a profit with the 1972 World Championships in Calgary and more than delivered, realized that the only way that Skate Canada would make money was if it was televised. A year prior to the event, he and Hugh Glynn met with Johnny Esaw of the CTV to discuss the possibility of broadcasting the competition. Esaw offered to buy the rights, so long as rinkboard advertising - common in Europe but unheard of in Canada at the time - was included. In order to gain approval, Esaw had to get Murray Chercover, the President of CTV, to contact to the Canadian Radio and Television Committee for permission to display the advertisements. In her book "Ice Time", Debbi Wilkes recalled, "The ISU had signed a deal with a Swiss marketing company, Gloria Transparente, to sell board ads at events beginning with the 1973 Worlds... Chercover wrote the [CRTC] to explain the problem of selling ads in Canada that might compete with the board ads coming from Europe... The [CRTC] agreed to change its policy, as long as the boards were sold to the same companies sponsoring the telecast. Blundun and Glynn had no choice but to put the boards into the package, where they have stayed ever since." 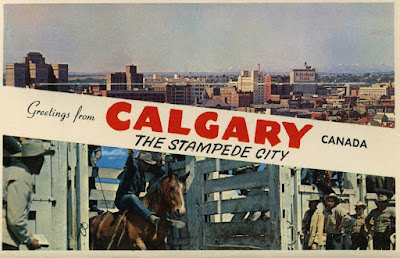 With CTV buying the rights, the first Skate Canada garnered a net profit of over twelve thousand dollars. Largely due to the television revenue, the first Skate Canada competition was a financial success. Local interest and attendance were also strong. A report in "The Canadian Skater" magazine noted, "The enthusiasm and warmth generated by the general public was praiseworthy. Attendance at all performances was good, culminating in a capacity crowd for the Saturday evening's finale and presentation ceremonies. Even morning and afternoon practice sessions were well-attended with such non-professional, but obviously interested spectators, as housewives and school children attending." 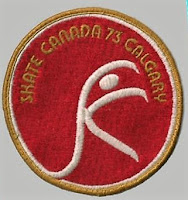 Now that we've set the stage, let's take a look at the most important part of this historic event... the skating! 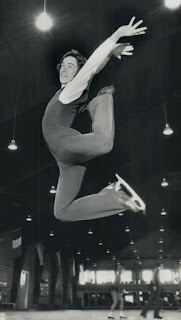 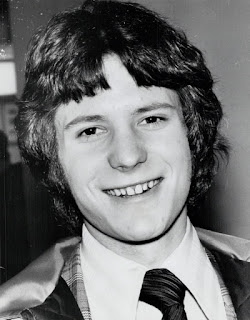 Chock full of skaters who'd achieve great things on the international stage in the mid to late seventies like Robin Cousins, Ron Shaver, Minoru Sano and Terry Kubicka, the men's competition in Calgary was certainly full of impressive talent. However, the clear favourite was Canada's own Toller Cranston. 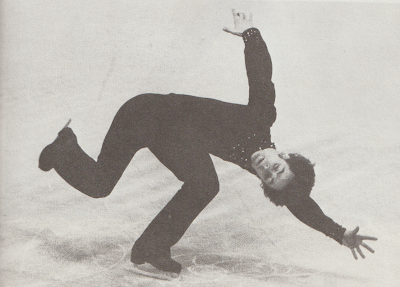 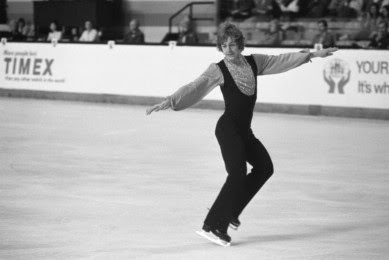 Robin Cousins, who had just passed his Inter-Gold Test that summer, placed tenth out of twelve skaters. In the book "Skating For Gold", he recalled, "It was a very good competition and a great experience which I enjoyed immensely... I had gone there as a nobody and came away as a nobody, but gained plenty from watching everyone else - learning how others compete and how they withstand the pressures - and I knew that next time I went abroad to compete, I should be able to put to good use my experience in Calgary." 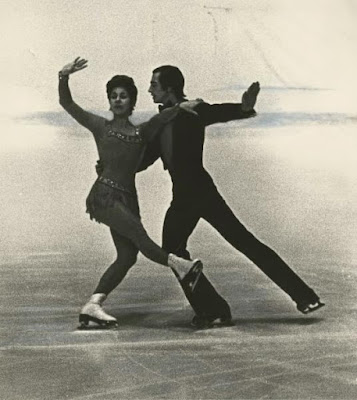 With Japan opting not to send an ice dance team, there were eleven entries in the first Skate Canada ice dance competition... but there were actually twelve ice dance teams in Calgary. World Champions Lyudmila Pakhomova and Aleksandr Gorshkov attended the event as special guests, performing an exhibition to Aram Khatchaturian's "Masquerade Waltz" which drew accolades from many. Frank Nowosad called Pakhomova "the essence of dance on ice." 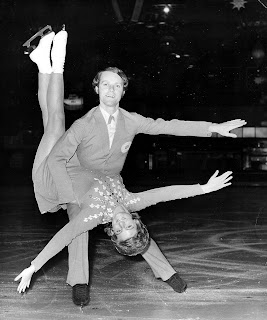 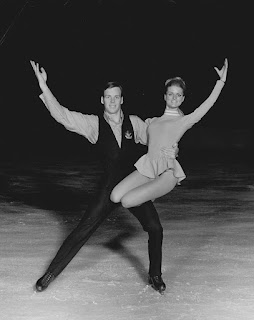 Left: Hilary Green and Glyn Watts. Photo courtesy "Ice & Roller Skate" magazine. Right: Louise and Barry Soper. Photo courtesy "The Canadian Skater" magazine.
In her book "Figure Skating History: The Evolution Of Dance On Ice", Lynn Copley-Graves recalled the ice dance event thusly: "Hilary Green and Glyn Watts came out with British strength in the compulsories for an early lead. The Sopers had improved in the compulsories and would unveil a new free dance. The tango OSP would make 'Hernando's Hideaway' seem like a compulsory tune. Rosalind Druce and David Barker had precise timing and difficult steps in their outstanding OSP. Irina Moiseeva and Andrei Minenkov's OSP contrasted in its simplicity and elegance." Though 'Min and Mo' captured the eye of many as "a team to watch", they placed third behind Green and Watts and Canadians Louise and Barry Soper. The other two Canadian teams competing, Barbara Berezowski and David Porter and Deborah and John Dowding, finished seventh and eighth.

With Karen Magnussen having left the amateur ranks, there wasn't a great sense that any of the three Canadians competing in Calgary would challenge the invited skaters for the women's title.
Great Britain's Jean Scott took a strong lead in the school figures, ahead of America's Juli McKinstry. 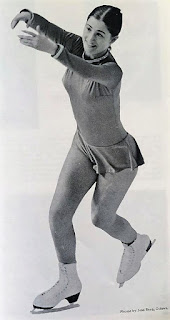 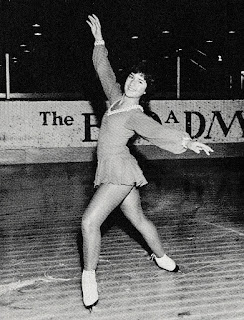 Lynn Nightingale, only seventh in the figures, surprised everyone by rebounding with outstanding performances in both the compulsory short program and free skate and moved all the way up to first. Her teammate, Barbara Terpenning, moved up from third in figures to take the silver ahead of Scott. McKinstry finished fourth, just ahead of Czechoslovakia's Liana Drahová and Liudmila Bakonina of the Soviet Union. The unexpectedly strong finish for the Canadian contingent gave great hope at the time to the CFSA, who believed its next great women's champion may not be long in the making. Later, Lynn Nightingale admitted she'd climbed to the very top row of the Stampede Corral while the final group was warming up and hexed the final group, wishing they'd all fall at least once. They did, she felt horrible about it and never did it again. On the trip home to England, Jean Scott celebrated her twenty-first birthday in the skies. Howard Bass recalled, "The Air Canada flight captain turned up trumps by providing a special cake and champagne to complete [the British team's] happiness."

Skate Guard is a blog dedicated to preserving the rich, colourful and fascinating history of figure skating and archives hundreds of compelling features and interviews in a searchable format for readers worldwide. Though there never has been nor will there be a charge for access to these resources, you taking the time to 'like' on the blog's Facebook page at http://www.facebook.com/SkateGuard would be so very much appreciated. Already 'liking'? Consider sharing this feature for others via social media. It would make all the difference in the blog reaching a wider audience. Have a question or comment regarding anything you have read here or have a suggestion for a topic related to figure skating history you would like to see covered? I'd love to hear from you! Learn the many ways you can reach out at http://skateguard1.blogspot.ca/p/contact.html.
Posted by Skate Guard Blog at October 26, 2021
Email ThisBlogThis!Share to TwitterShare to FacebookShare to Pinterest
Newer Post Older Post Home