When you dig through skating history, you never know what you will unearth. In the spirit of cataloguing fascinating tales from skating history, #Unearthed is a once a month 'special occasion' on Skate Guard where fascinating writings by others that are of interest to skating history buffs are excavated, dusted off and shared for your reading pleasure.

From forgotten fiction to long lost interviews to tales that have never been shared publicly, each #Unearthed is a fascinating journey through time. This month's #Unearthed is an article called "Skatana", which appeared in "The National Ice Skating Guide" in 1948. Its author, Roland C. Geist, was a major collector of skating memorabilia. He also served as the Secretary of the College Skating Club Of New York and the Faculty Advisor of the Newtown High School Skating Club.

Broadsheet of skaters on the 'ladies end' of the skating pond in Central Park, New York City, 1862


Skatana is the collecting of skates and all items pertaining to skating. This fascinating collecting hobby is second only to enjoying skating itself. There are hundreds of skaters who get a pleasure from picking up an old pair of skates, a book on skating or an old print. These collectors are bankers, professional people, secretaries and folks from all walks of life who have become intensely interested in these antiques.

"A New Invention Of A Boat That Sails Over Frozen Ice and Flat Land", broadsheet by Christoffel van Sichem, circa 1600. This piece is said to depict the first Dutch iceboat, which would carry people in skating parties like a sledge.

Looking up the origin of an old pair of blades is a study in itself. Judging of old skating prints requires a good knowledge of art. The writer has spent hours in the New York Public Library looking up old skating songs dating back a hundred years or more. Correspondence with other collectors and authors is most interesting. At auction sales these items may bring the collector a good return for his work. Exhibiting the collection at hobby shows is also fun. Skatana items are found in antique shops, old farms, rummage sales, old book stores and print shops. 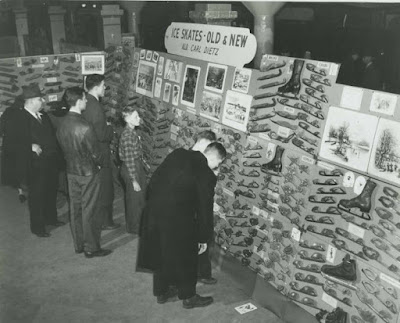 A display of skates from the around the world from Carl Dietz' collection, exhibited at the Wisconsin Hobby Exposition in the late forties. Photo courtesy Minnesota Historical Society.

Probably the largest collection of ice skates was shown at the opening of the Center Theatre in New York several years ago. About a thousand pair of ice skates were exhibited, ranging in size from a half inch to several feet. The late Irving Brokaw had an unusual collection of antique blades which were on show at a New York ice rink. Eddie Shipstad of the Ice Follies also has a grand collection to which he is constantly adding. The writers best exhibits are a figure skate made by C. Stenton, a New York skate make, and a pair of old wood top racing blades such as used at Newburgh nearly a hundred years ago. Historical museums in most cities have the old Dutch type skate blades on display. Some New York antique shops offer these blades from $5.00 to $25 a pair. 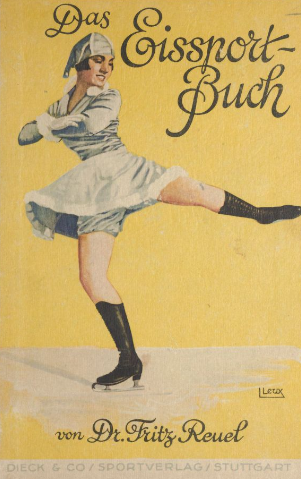 Next to skates themselves books are probably the most important collectors item. According to Van Stockum (Sport Bibliography published in 1914) between 1800 and 1912, 23 skating books were published in English; 24 in German, 9 in Dutch and 4 in French. Within the last ten years 15 books have been published in the United States on ice skating and ice dancing. The writer considers the three classic books of modern times to be: "The Art Of Skating" by Irving Brokaw; "The Beauty Of Skating" by Manfred Curry and "Skating With Bror Meyer". The last mentioned volume was limited to 300 copies and recently a copy was sold for $75.00. Autographed copies of Sonja Henie's "Wings On My Feet" is a nice collectors item. Back in 1916, Charlotte, the predecessor of Sonja, wrote the popular "Hippodrome Skating Book". One of the first books on skating, entitled "Frostiana" published in London on the ice in 1814 is a very rare volume but it may fall into the hands of a Skatana enthusiast. 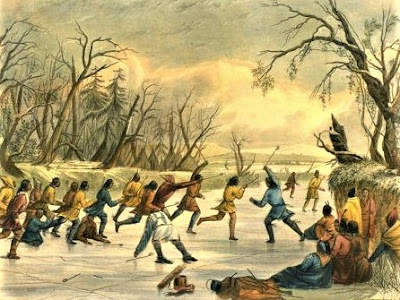 "Ball Play On The Ice", colourized version of a giclee print by Captain Seth Eastman, 1853

Old skating print collecting requires much artistic research. A wonderful special exhibition of old skating prints dating from 1550 to 1900 was displayed in the Free Library of Philadelphia some years ago by William Arthur Esq. This is probably the finest collection in the United States and worth thousands of dollars. The popular and famous Currier and Ives, "Skating - Central Park" recently brought $500 at an auction sale. Many of the skating scenes in Holland and England are the works of the old masters and are extremely rare and valuable. The writers oldest print is by Gilray about 1790 entitled "Elements Of Skating" showing a gentleman of the period executing a spread eagle with badly bent knees. Many fine skating engravings may be found in copies of "Harper's Weekly" dated about 1859. In 1896 George Blair made some fine prints of skating entitled "Winter Enjoyment In Central Park". 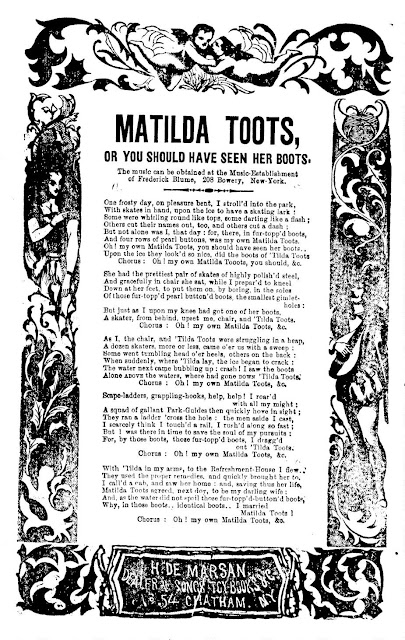 Music sheets about skating forms another item for the collector. They may be picked up at old book stores, music shops, antique stores, etc. "The Skater's Waltz" is the popular favourite of skaters as "Daisy Bell" is the bicyclists standard tune. The writers oldest sheet is dated 1837 and the song is entitled "Merrily Now The Skaters Go" written by Thomas Powers and Charles E. Horn. The classic piece is "Le Prophète Waltz Brilliante" from Meyerbeer's opera featuring our own Jackson Haines. In 1915 Raymond Hubbell composed the "Charlotte Waltz" for the big ice show at the [new] New York Hippodrome.
Diane Taraz's rendition of "Matilda Toots"
The best ice comedy music is no doubt "Matilda Toots" who fell into the ice with her new skating boots and is about to be hauled out by a gentleman skater. Sonja Henie's "One In A Million" and her complete set of songs from her shows will some day form the basis of a Heniana Collection. Skating song sheets cost from $1.00 to $25 depending upon their age, rarity, coloured illustration, popularity, etc. 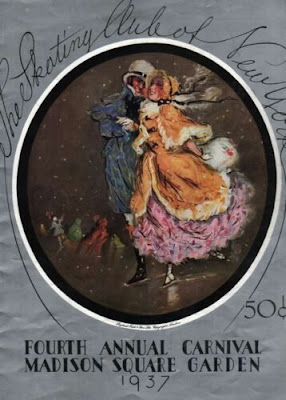 Ice show program collectors will enjoy living over the past glorious skating events with programs from the New York Hippodrome from 1914 to 1922 especially the 1915 colored program from "Flirting In St. Moritz" featuring Charlotte. Amateur ice shows held at Madison Square Garden started printing elaborate programs that sold at 25 and 50 cents. Silver Skate and figure skating championship programs round out a good program collection. 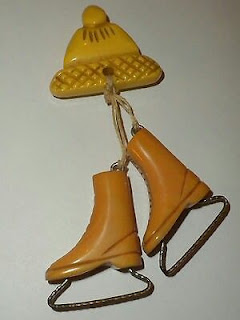 Mid-Century brooch with skates and hat

Old and new skate jewelry and novelties do not require much space and are always worth their weight in silver or gold. The Saint Liedwi medallion (the patron saint of all skaters) recently produced for skaters, is a good luck piece to start a skate jewelry collection. Recently the writer picked up a "Palace Championship" skating belt which was won in 1885 by Howard Starrett. It is believed that the old Brooklyn Ice Palace was the place where this was won. A New York skater had a pair of gold skate earrings made up to order. Buttons, brooches, pins, watches, bracelets, etc. are worn to indicate that the wearer is a skater. Those who have been fortunate enough (and worked hard too) to win skating championships and made tests have the nucleus of a personal collection. 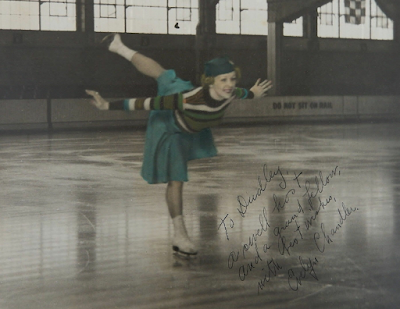 The bobby sox crowd pursue the ice stars of stage and screen for autographs and signed photographs and often do get them. An album of such signatures and pictures is always of interest to everyone. Many of the stars will send you their photographs for the asking. They may be bought at the shops that make a specialty of selling 'movie stills'. A scrapbook of newspaper and magazine clippings on skating will keep one busy without end. With so many skating shows, movies and events on all the time there is plenty of news. A New York newspaper features a "SKATING" column twice a week. Magazines like "Skating", "American Roller Skater" and "National Ice Skating Guide" provide many pictures and articles that are very worthwhile. Posters from ice shows and skate manufacturers are often most artistic and even expensive but round out a complete collection. Films, skating costumes, menus... there seems to be no end to things one may collect. Try collecting - it is fascinating.

Skate Guard is a blog dedicated to preserving the rich, colourful and fascinating history of figure skating and archives hundreds of compelling features and interviews in a searchable format for readers worldwide. Though there never has been nor will there be a charge for access to these resources, you taking the time to 'like' on the blog's Facebook page at http://www.facebook.com/SkateGuard would be so very much appreciated. Already 'liking'? Consider sharing this feature for others via social media. It would make all the difference in the blog reaching a wider audience. Have a question or comment regarding anything you have read here or have a suggestion for a topic related to figure skating history you would like to see covered? I'd love to hear from you! Learn the many ways you can reach out at http://skateguard1.blogspot.ca/p/contact.html.
Posted by Skate Guard Blog at September 28, 2021
Email ThisBlogThis!Share to TwitterShare to FacebookShare to Pinterest
Newer Post Older Post Home