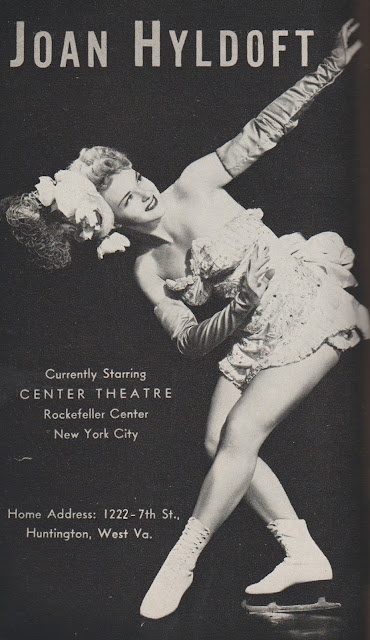 "If I didn't get good grades, my father would make me stop skating. I skate because I love it, and when I see people in the audience enjoying my work, it gives me pleasure." - Joan Hyldoft, "New York Post", August 23, 1946

The daughter of Inga (Johnson) and Ewald Andreas Hyldoft, Johanne Christine 'Joan' Hyldoft was born January 27, 1926 in Lindsborg, Kansas. Like many of the tiny city's residents, the Hyldoft's had Scandinavian ties. Joan's paternal grandparents were from Denmark; her maternal grandparents from Norway. Her grandfather Andreas was a well-respected watchmaker. Her parents were both school teachers. Joan got her first taste of the spotlight when she was only fourteen months old. She was selected as 'the healthiest baby' over five hundred other infants at a contest held at the Texas Cotton Palace exposition.

Joan took up ballet at the age of nine and continued with her dance lessons when her family moved to Huntington, West Virginia, where her father had secured a job teaching biology at a local high school. It was soon discovered that Joan's talents extended far beyond the dance floor. She won a blue ribbon at Huntington's famous horse show, took the state diving trophy and drew praise for her organ playing at the local Lutheran church.

At the age of fourteen, Joan took to the ice for the first time at Huntington's indoor rink after watching one of Sonja Henie's films. An onlooker told her parents she was a natural and the next year, she was sent to train with Gustave Lussi at the Lake Placid summer school. She shared the ice with a very young Dick Button and soon drew praise for the height of her Axel jump and the speed of her camel spin. In an age where surety and elegance were foremost in the minds of many young 'lady skaters', Joan had youth and athleticism on her side.

Soon, skating took over. Joan and her mother moved into an apartment in Philadelphia. While attending the Baldwin School for Girls at Bryn Mawr, Joan practiced daily at the Philadelphia Skating Club and Humane Society. "I'd skate from 6 until 9 o'clock each morning, go to classes during the day, skate from 5 o'clock in the afternoon until 9 at night."

In January of 1942, she took the gold in the novice women's class at the Eastern States Championships at Iceland in New York City. Her victory was quite incredible considering the fact she'd only been skating for two years and there were thirty-three entries - an absolutely unheard of number in those days. Among the young women she defeated were Lois Waring, Eileen Seigh and Irene Maguire - all future U.S. senior medallists. Disappointingly, Joan placed a disastrous ninth in the novice women's event at the U.S. Championships that followed in Chicago. It would be her final competition on skates... technically. 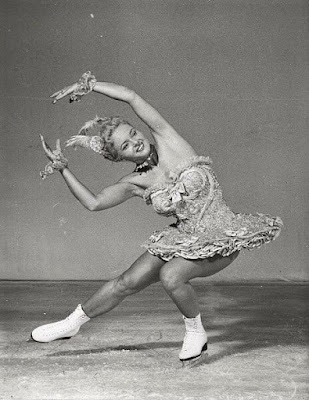 Joan turned professional at the age of fifteen after being offered a job skating at the Netherland Plaza hotel's ice show in Cincinnati. While in the Queen City, she entered WCKY radio's Miss Cincinnati pageant. She took first prize, defeating one hundred and twenty-four other young women with a show-stopping talent number - a skating performance on 'muck' (artificial) ice. It was perhaps the first time in American history that figure skating was performed in a beauty contest or pageant. As the winner, she was sent to Atlantic City to compete in the finals of Miss America. Things didn't go quite as smoothly with Joan's talent act in New Jersey. Depending on the source you read, one of two things happened. Either the sun baked the muck ice turning it into a syrupy consistency you couldn't skate on or "just before Joan was to go on, the 300-pound stage manager stepped on the ice and fell, breaking it into hundreds of pieces". Either way, Joan's skating act was a bust but 'the show must go on' mentality kicked in. She performed her skating number (minus the ice) on the floorboards of the Warner Theater's stage and took a prize in the preliminary round. 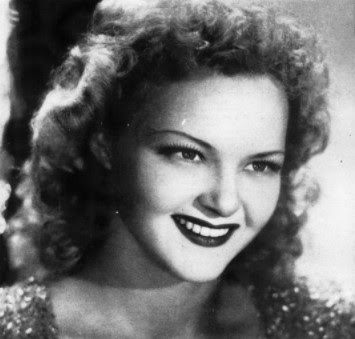 Photo courtesy "McCall's" magazine
Over the next several years, Joan performed for thousands of dinner guests at the hotel 'icers' that were hugely popular during and in the aftermath of World War II. Before she even turned twenty, she was capturing hearts at the Iridium Room at the the Hotel Stevens in Chicago and half a dozen New York venues - the Hotel New Yorker, Biltmore Hotel, Center Theatre and Roxy Theatre. She even appeared in an ad for Pepsident toothpaste. 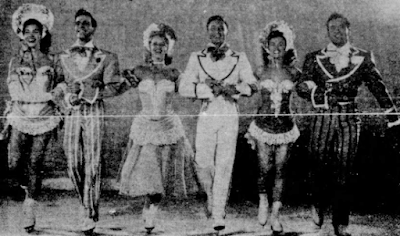 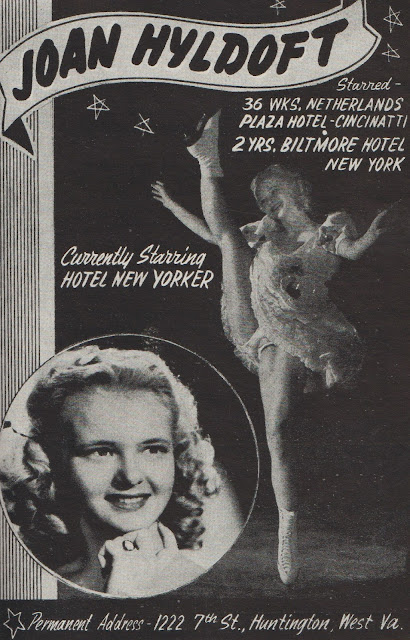 Ultimately, skating won out over school and what was intended to be a short stint as a professional turned out to be a decade-long career. After a brief stint performing in a British ice pantomime, she returned to Holiday On Ice in 1959, joining Dick Button on a historic skating tour behind the Iron Curtain in Soviet Russia. 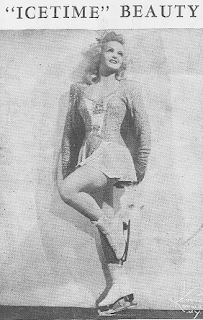 Joan retired from professional skating in the early sixties, sidelined by a recurring back injury. She found a job teaching skating at the Iceland rink in Houston, Texas and married Tommy Harral, a local drama teacher's son, in October of 1961. The marriage didn't last. She settled in Waco, took a job as a part-time secretary and became involved in the First Lutheran Church. For a short time, she taught skating in Waco as well. She passed away on August 25, 1986 at the age of sixty, her skating stardom in the forties and fifties all but forgotten.

Skate Guard is a blog dedicated to preserving the rich, colourful and fascinating history of figure skating and archives hundreds of compelling features and interviews in a searchable format for readers worldwide. Though there never has been nor will there be a charge for access to these resources, you taking the time to 'like' the blog's Facebook page at http://www.facebook.com/SkateGuard would be so very much appreciated. Already 'liking'? Consider sharing this feature for others via social media. It would make all the difference in the blog reaching a wider audience. Have a question or comment regarding anything you have read here? Have a suggestion for a topic related to figure skating history you would like to see covered? I'd love to hear from you! Learn the many ways you can reach out at http://skateguard1.blogspot.ca/p/contact.html.
Posted by Skate Guard Blog at September 14, 2021
Email ThisBlogThis!Share to TwitterShare to FacebookShare to Pinterest
Newer Post Older Post Home
"As a rule an author has one or two popular ways of contrasting the past with the present. He can treat the past as lying in comparative doleful ignorance, or he can explain that the past was infinitely superior to the day we live in. Of course, either method is the popular journalism of the moment, and in reality there is no sharp contrast, but a gradual transition which leads the past into the present." - Joel B. Liberman, Skating Club Of New York