The Tall And The Short Of It 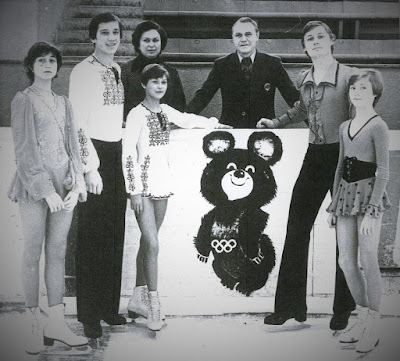 Stanislav Zhuk posing with a group of his students, including Marina Cherkasova and Sergei Shakrai

"The man should be heavier than the lady and for appearance's sake, about half a head taller." - Robert Dench and Rosemarie Stewart, "Pair Skating And Dancing On Ice", 1943

When Anna Hübler and Heinrich Burger won the first official World pairs title in St. Petersburg, Russia in 1908, their height difference was quite irrelevant. Their self-choreographed program consisted of a series of spirals, glides, changes of edge, round ice dance patterns and symmetrical and corresponding figures, but didn't include a single jump, throw, twist or overhead lift. As we all know, pair skating was a completely different beast back in the Edwardian era. It really wasn't until the sixties, the era when double twist lifts and throw jumps were popularized, that the sport became introduced to a new phenomenon: the 'flea and gorilla' pair.

In the late sixties, the athletic performances of American siblings Cynthia and Ron Kauffman earned them three consecutive bronze medals at the World Championships. Their considerable height difference (thirty three centimeters) added to the drama of dome of their signature moves. Inspired by their success, Eastern bloc countries began concocting partnerships with pronounced differences in height. Irina Rodnina, the queen of pairs skating in the seventies, was twenty four centimeters shorter than her first partner Alexei Ulanov and twenty six centimeters shorter than her second partner Aleksandr Zaitsev. Both partnerships used their height difference to their advantage to perform twist lifts with great effect. 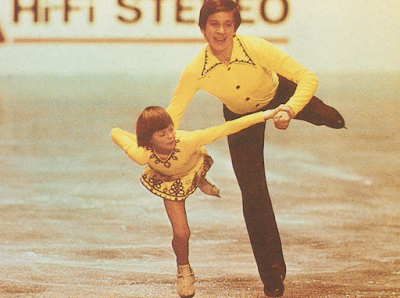 Two notable early examples of these 'flea and gorilla' teams were East Germans Manuela Groß and Uwe Kagelmann and Soviets Marina Cherkasova and Sergei Shakhrai. The height and age differences between both teams were startling to many at the time. "Skating" magazine ran an article about Groß and Kagelmann in 1973 with the headline "The Mutt and Jeff Pair", pointing out how their nine inch height difference helped them accomplish the first triple twist lift and throw double Axel. When they were paired, twelve year old Cherkasova and eighteen year old Shakrai had a thirty-five centimeter height difference. This extreme (at the time) contrast earned both pairs Olympic medals. Cherkasova and Shakrai even made their way to the "Guinness Book Of World Records" as the first pairs team in history to perform a quadruple twist in 1978.

In his review of the 1978 World Championships in "Skating" magazine, Frank Nowosad remarked, "It is inconceivable that ice dancing would ever have the judging problems brought on by a 12-year-old child being thrown about by a 20-year old man. Two people performing together implies a relationship and what can be said choreographically about such a large/small situation that now exists with two of the Soviet pairs? Watching them draws out bizarre associations; one being that of a virtuoso juggler tossing about a doll."


Make no mistake... these partnerships were no accident. In his 1978 book " The Big Red Machine The Rise And Fall Of Soviet Olympic Champions", Yuri Brokhin explained that Soviet coach Stanislav Zhuk (coach to Olympic Gold Medallists Irina Rodnina, Alexei Ulanov, Alexander Zaitsev, Ekaterina Gordeeva and Sergei Grinkov) began "the creation of a future pair by selecting the female partner. Then he begins his search for the male - usually a boy ten to fifteen inches taller and fifty to sixty pounds heavier than the girl, with obvious native ability."

The ISU responded by developing a controversial new ruling set to curb the 'flea and gorilla' trend. Late ISU historian Benjamin T. Wright recalled, "Large differences in age, height and weight between the partners... would lead to rules (in 1980) which would require penalizing pairs when there was a serious imbalance in their physical characteristics, which would lead to an obvious lack of unison. There were, of course, several pairs of this type... [and] the legislation addressed a generic problem in pair skating, which fortunately, has not been as severe since."

In the figure skating world of today, extreme height differences are definitely not uncommon... and whether you like the aesthetic of this trend or not, we have the Russians and East Germans largely to thank for starting it all.

Skate Guard is a blog dedicated to preserving the rich, colourful and fascinating history of figure skating and archives hundreds of compelling features and interviews in a searchable format for readers worldwide. Though there never has been nor will there be a charge for access to these resources, you taking the time to 'like' on the blog's Facebook page at http://www.facebook.com/SkateGuard would be so very much appreciated. Already 'liking'? Consider sharing this feature for others via social media. It would make all the difference in the blog reaching a wider audience. Have a question or comment regarding anything you have read here or have a suggestion for a topic related to figure skating history you would like to see covered? I'd love to hear from you! Learn the many ways you can reach out at http://skateguard1.blogspot.ca/p/contact.html.
Posted by Skate Guard Blog at June 15, 2021
Email ThisBlogThis!Share to TwitterShare to FacebookShare to Pinterest
Newer Post Older Post Home
"As a rule an author has one or two popular ways of contrasting the past with the present. He can treat the past as lying in comparative doleful ignorance, or he can explain that the past was infinitely superior to the day we live in. Of course, either method is the popular journalism of the moment, and in reality there is no sharp contrast, but a gradual transition which leads the past into the present." - Joel B. Liberman, Skating Club Of New York