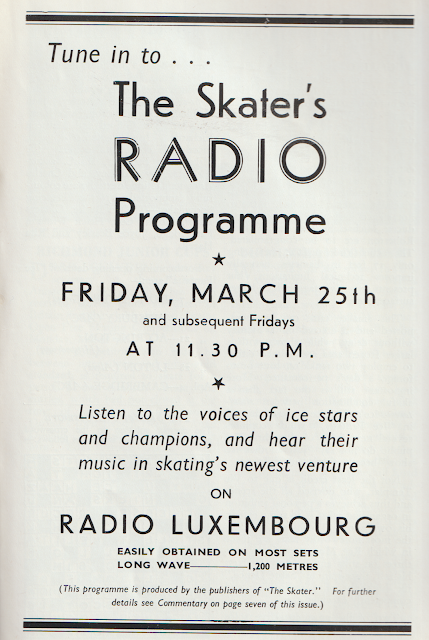 Looking through a modern lens, it's hard to imagine a time when things like television, YouTube, podcasts and blogs didn't exist. Today, with a tap on an touchscreen or a quick click of a button, we can watch a live stream of a competition or a Facebook Live interview with our favourite skater. It's like magic in a way... a concept that would have seemed completely foreign and even frightening to skating fans of decades past.
In the roaring twenties, skating news was mainly disseminated in magazines, newspapers, personal letters and books. Unless you were lucky enough to watch a grainy newsreel clip of a skater gracefully gliding over the ice in your local theatre, you gleaned knowledge about the sport by reading - not by watching or listening. That began to change in the thirties when skating started to be covered on the radio and a new-fangled invention - the television.

One of the first skating-themed radio broadcasts in England occurred in 1937, when commentary of the women's free skating at the British Championships at the Empire Pool, Wembley was presented, supplemented by performances by Reginald Foort on the BBC Theatre Organ. Two years later, an exhibition performance given by Daphne Walker during the intermission of a hockey game between teams from Earl's Court and Streatham was aired on television.
Skating disappeared from television and radio in England during wartime, reappearing in December of 1945 when Michael Barsley and Peter Eton ran a segment on their radio show "People's Pleasures" called "Round The Rinks" which offered some fun facts and 'figures' about the people who ran ice rinks.
From 1946 to 1948, a handful of skating performances were aired on the BBC and in February of 1949, television history was made when the first televised ice show in England was aired in its entirety. It was a skating carnival put together by Miss Gladys Hogg at Queen's Ice Rink featuring Jennifer and John Nicks, Marion Davies and Michael Carrington that was hosted by 1936 Olympian Geoffrey Yates. That autumn, English audiences saw Cecilia Colledge skate during a broadcast of highlights of Tom Arnold's ice revues and in December, the British Championships made their national television debut.

The same year that Miss Gladys Hogg's ice show was broadcast on television, history was also made when what is believed to be the first skating-themed radio show made its debut. "The Skater's Radio Programme" was first broadcast on Radio Luxembourg half an hour before midnight on March 25, 1949.
The weekly radio show was the brainchild of sportswriter Howard Bass, then the editor of the magazine "The Skater". Bass' goal in producing the show was 'to promote ice-mindedness' . In his book "This Skating Age", he recalled, "These programmes, broadly speaking, comprised interviews with famous skaters of the day, interspersed with recordings of music to which they frequently skated, and it was certainly enlightening to realize just how musically entertaining such a programme could be made. I was not ashamed at the unoriginal signature tune. Even if you are a little tired of hearing Waldteufel's 'The Skater's Waltz' do please listen to the instrumentally superb recording of it by the Boston Promenade Orchestra, the finest contrapuntal arrangement I know, and still among the best possible accompaniments for skaters of all grades. Certainly we had variety, too, varying from 'The Sabre Dance' (New Promenade Orchestra), Saint-Saëns' 'The Swan' (Melachrino) and Gounod's 'Ballet Music From Faust' (National Symphony) to the contrasting rhythmic tempos of 'In The Mood' (Glenn Miller) and 'I've Got The Sun In The Morning' (Joe Loss)'."

"The Skater's Radio Programme" was co-hosted by Howard Bass and Ron Priestley, an English born Australian professional skater and barrel jumper who had made a name for himself performing in "Enchanted Night" and "The Brahman's Daughter" with Belita and the Brunet's and Phil and Megan Taylor's "Switzerland" tour in Australia and New Zealand prior to World War II. Guests on the show included Jeannette Altwegg (then the reigning Olympic Bronze Medallist), Maj-Britt Rönningberg, Marion Davies, Carol Lynne, Terry Brent and Phil Romayne, Baddy and Buddy and The Jive Trio. Valerie Moon, the runner-up at the 1948 and 1949 I.P.S.A. Professional Championships, treated audiences to her mezza-soprano rendition of the song "This Is My Lovely Day". The show reached audiences throughout Europe - even behind the Iron Curtain and the B.O.A.R. zone in Germany.

Though "The Skater's Radio Programme" received rave reviews, it was short-lived - only lasting one season. The exact reason why it didn't continue is unknown, but its late hour and the rise of television may have been the culprit. After all, Howard Bass admitted, "Skating... [is] so essentially visual." Sadly, no known recordings of "The Skater's Radio Programme" survive today. At the time, those producing radio content rarely considered the concept of archiving material for long-term use and making recordings was prohibitively expensive... if one even had the means of doing so. "The Skater's Radio Programme" may have relegated itself to the footnotes of skating history, but it was this pioneering effort that paved the way for the skating podcasts of today.

Skate Guard is a blog dedicated to preserving the rich, colourful and fascinating history of figure skating. Over ten years, the blog has featured over a thousand free articles covering all aspects of the sport's history, as well as four compelling in-depth features. To read the latest articles, follow the blog on Facebook, Twitter, Pinterest and YouTube. If you enjoy Skate Guard, please show your support for this archive by ordering a copy of figure skating reference books "The Almanac of Canadian Figure Skating", "Technical Merit: A History of Figure Skating Jumps" and "A Bibliography of Figure Skating": https://skateguard1.blogspot.com/p/buy-book.html.
Posted by Skate Guard Blog at January 04, 2023
Email ThisBlogThis!Share to TwitterShare to FacebookShare to Pinterest
Newer Post Older Post Home