In late March of 1951, Calgary's Glencoe Club had the honour of hosting the North American Figure Skating Championships. Though the club had recently hosted the 1948 Canadian Championships, a skating club west of Ontario had never before had the privilege of hosting North Americans. Spectators came to the Alberta city's brand new Stampede Corral from as far away as Edmonton, Vancouver and Winnipeg, excited to have the opportunity to see world-class skaters in the flesh.

Organizers from the Glencoe Club made sure the skaters and officials were entertained too. A trip to Banff was arranged so that skaters could take in the Olympic Ski Trials. Luncheons and a buffet supper were held at the Club, and CFSA President Alf Williams and his wife held a special dinner at their home. Olympic Gold Medallist Barbara Ann Scott even made an impromptu visit on her way home from an exhibition performance in Edmonton. 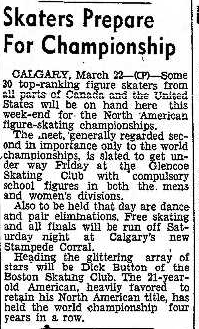 ISU historian Benjamin T. Wright recalled, "It is a historical note that the panels of judges [in Calgary] were all men, with one exception, Mary Louise Premer of St. Paul, who judged all four events. Actually, in the prior two North Americans since the War, there had only been one woman on the panels of judges each year."

For once, visitors to the Prairies weren't treated to an icy blast; temperatures were unusually seasonal. Let's take a look back at how the competition unfolded! 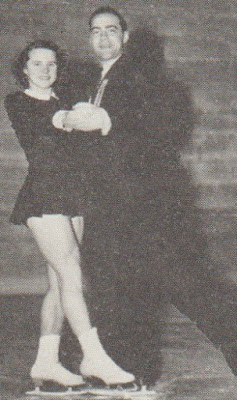 The ice dance event was the only competition in Calgary with an odd number of entries. U.S. Silver Medallists Virginia Hoyns and Donald Jacoby were unable to attend, stacking the odds in favour of the three Canadian couples. The judges had a tough task eliminating one team in the first round of competition, but Canadian Tenstep Champions Mary Diane Trimble and David Ross didn't make the cut. U.S. Champions Carmel and Ed Bodel took the gold with first place ordinals from four judges. The one holdout, Ottawa judge Donald B. Cruikshank, had them dead last. 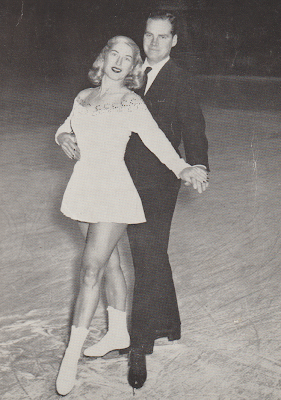 Americans Carol Ann Peters and Danny Ryan and Pierrette Paquin and Canadians Donald Tobin tied in ordinal placings, but the Americans took the silver with a majority of second places. Frances Dafoe and Norris Bowden placed fourth, but were marked second on two judge's scorecards. Prior to the event, the rules had been changed so that Gold Dances would be skated, but as Canada had only instituted their Gold Dance Test the year prior an agreement was reached that Silver Dances only would be skated.

Four pairs vied for the Layman Trophy in the pairs event. World Champions Karol and Peter Kennedy were unsurprisingly heavily favoured to win. Win they did, unanimously in fact, with a difficult performance which Shirley Martin Boyse noted appealed "to both audience and judges." Their American teammates Janet Gerhauser and John Nightingale took the silver, ahead of Jane Kirby and Donald Tobin and Frances Dafoe and Norris Bowden. Just three years later, Dafoe and Bowden would be World Champions. 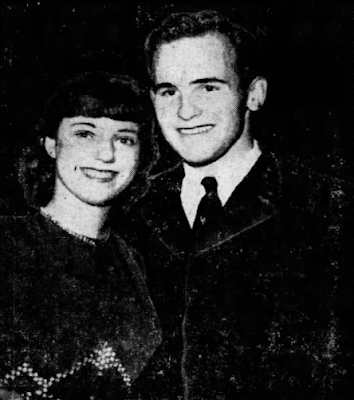 Virginia Baxter was the only medallist from the 1949 North American Championships in Philadelphia to return in 1951. Unfortunately, she wasn't able to move up in Calgary, let alone defend her bronze medal. A new crop of women had entered the game and in the figures, it couldn't have been closer between Sonya Klopfer, Suzanne Morrow and Tenley Albright. The well-matched trio of skaters were neck and neck heading into the free skate, with sixteen year old Klopfer holding the lead by the closest of margins. Sonya was named after Sonja Henie, whom her mother admired, but the name was anglicized. It didn't matter anyway. Associated Press reporters covering the event from Calgary called her 'Sonja Klopper'.

A fast and dynamic free skating performance gave Sonya Klopfer a unanimous win, but only one ordinal placing separated Morrow in second from Albright in third. It was one of best skated women's events at North Americans in recent years... no wonder as all three of the medallists placed in the top six in the recent World Championships in Milan. 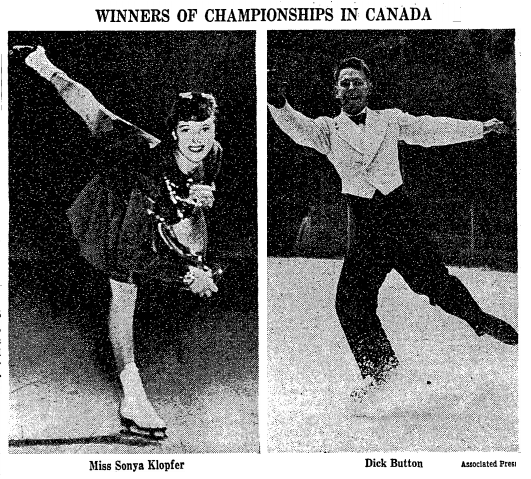 If the women's event was a nail-biter, the men's competition was smooth sailing for Olympic Gold Medallist and World Champion Dick Button. The twenty one year old Harvard junior took a commanding lead over Jimmy Grogan, Hayes Alan Jenkins and Peter Firstbrook in the figures and skated with confidence and control in the free skate to unanimously defend his North American title for the third consecutive time. No other man had won the event thrice since Montgomery 'Bud' Wilson prior to World War II... but Button, Grogan and Jenkins had placed in the exact same order in Philadelphia in 1949. Peter Firstbrook, Don Laws, Donald Tobin, Bill Lewis and Roger Wickson rounded out the eight man field.

The American sweep of the gold medals in all four disciplines might have been disappointing to the Canadian organizers, but it spoke not to the weakness of Canadian skaters but instead the utter domination of American skaters in post-War figure skating. Win or lose, every skater left Calgary with a special souvenir from the City Of Calgary... a white cowboy hat.

Skate Guard is a blog dedicated to preserving the rich, colourful and fascinating history of figure skating and archives hundreds of compelling features and interviews in a searchable format for readers worldwide. Though there never has been nor will there be a charge for access to these resources, you taking the time to 'like' the blog's Facebook page at http://www.facebook.com/SkateGuard would be so very much appreciated. Already 'liking'? Consider sharing this feature for others via social media. It would make all the difference in the blog reaching a wider audience. Have a question or comment regarding anything you have read here? Have a suggestion for a topic related to figure skating history you would like to see covered? I'd love to hear from you! Learn the many ways you can reach out at http://skateguard1.blogspot.ca/p/contact.html.
Posted by Skate Guard Blog at January 25, 2022
Email ThisBlogThis!Share to TwitterShare to FacebookShare to Pinterest
Newer Post Older Post Home