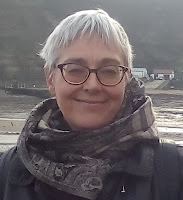 Five-time European Champion and four-time World Champion Courtney Jones was the king of ice dancing in the late fifties and early sixties. He went on to serve as an ISU Official, President of the National Skating Association and National Ice Skating Association and international judge and referee. His contributions to figure skating and ice dancing are immeasurable, and soon his story will be coming to light in a new memoir being edited by Helen Cox. I recently had the chance to connect with Helen for a brief interview which you might find quite interesting!

Q: You've written about the War of the Roses and fifteenth century British history and given talks on the Magna Carta, Marie Antoinette and The Black Death. Can you tell me a little bit about your background and how you ended up editing the autobiography of a World Champion ice dancer?
A: By pure fluke! At eighteen, I set out to be an archaeologist but discovered I didn't like digging, so I trained as an antiquities conservator instead and spent twenty-some years working in the museum sector. Then I met my husband-to-be, retired in 2005 to move in with him in Wakefield, West Yorkshire, and became a 'writing housewife.' I'd always enjoyed the writing and lecturing side of my heritage career, so I set up a new vehicle, Herstory Writing & Interpretation, to carry those threads on, while indulging our mutual passion for medieval history and re-enactment, and also helping out in my husband's garden maintenance business - and that's how I came to meet Ron, a long-standing customer and friend who had a holiday home in Spain, where he'd got to know Courtney, who happened to mention that he'd written a memoir but didn't know how to get it published.
Having read my Battle of Wakefield Revisited, Ron thought I might be able to help and duly put us in touch. When Courtney sent me some extracts, including 'John Curry' and 'Lunch with the Queen,' I realized its potential straight away – also, to put our subsequent lengthy discussions in a nutshell, that it would be much quicker and simpler for me to prepare it for publication than for Courtney, who'd never done anything like it before and even had to teach himself computer skills from scratch before he started writing!
The change of genre was very refreshing, and I learned a huge amount about the history of a sport I'd always loved as an armchair spectator, (my sole teenage attempt at ice skating ended in miserable soaking failure!). It was also a rare treat to work as part of a team, and I must stress that I'm not the only editor. Elaine Hooper, Peter Morrissey, Bobby Thompson, and Courtney's friend Heather Jones all proof-read, fact-checked, corrected, and made valuable contributions to the text, and we reached collective decisions with Courtney on things like the title and cover design. I was amused to discover that this was exactly the process Courtney had always used in his NSA and ISU committee days, and it proved just as effective in this instance. 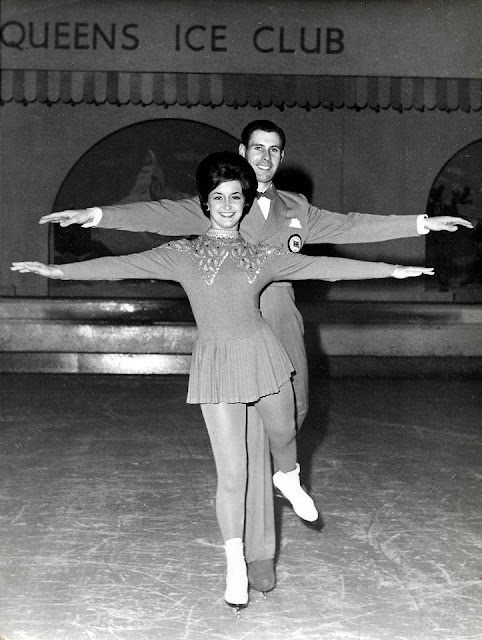 Doreen Denny and Courtney Jones. Photo courtesy "Skating World" magazine.
Q: What have been the biggest challenges of working on this project during a global pandemic?
A: There was only one - getting into print. I'd envisaged a hardback launch initially, with all the bells and whistles a mainstream publisher can supply; and given the importance of the author, the quality of his story, and its potential to sell in large numbers to an international readership, I expected someone to snap my hand off. Certainly, pre-pandemic, I never experienced difficulties in contacting an appropriate person to whom I could pitch ideas or make submissions - whereas nowadays it's hard enough to get a 'read receipt' for an email, let alone a live human to answer the phone. Plus, due to lockdowns and furloughs, Brexit delays on imports and exports, worldwide shortages of materials and so on, many publishers seem to be contending with massive backlogs – and since time was of the essence, it rapidly became clear that our most realistic option for early release was publication through Herstory.
I felt disappointed on Courtney's behalf until Elaine told us that many recent skating books have been privately published, including a very successful work by Dick Button. That got me thinking, which got me excited; and now we're in control of the process and having fun adding the final touches, I'm glad it's worked out this way. I only hope it'll be the success Courtney deserves.
Q: Courtney Jones, to this day, is the only ice dancer to have won the World Championships with two different partners. What do you think made him so dominant in the international ice dancing scene in the late fifties?
A: Everything! Nature and nurture combined to give Courtney a unique blend of talents – musician, artist, skater, dancer, fashionista and designer – and it's hard to imagine a better skill set for an ice dance champion. He was also backed to the hilt by his parents, trained by the best both in the ballroom and on ice, and had the unusual good fortune to skate with two phenomenal partners whose talents and looks complemented his own perfectly. And, of course, he had the tremendous self-discipline, dedication and capacity for hard work it takes to reach and stay at the top – just reading about his 18-hour daily schedule during his competitive career made me feel quite exhausted. 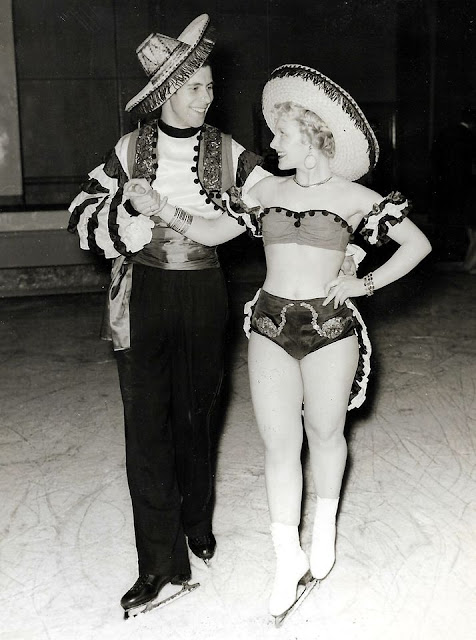 Courtney Jones and June Markham. Photo courtesy "Skating World" magazine.
Q: Many people know Courtney not only as a World Champion ice dancer, but also as an NSA and ISU Official and international judge and referee. Do you think his biggest contributions to ice dancing were on or off the ice?
A: That's a tough question for a non-skater to answer. Courtney's on-ice career was very short compared to his decades of involvement thereafter, so in terms of his lifelong advocacy, the vast sums he raised to benefit the sport, the number of skaters he helped, and the gigantic audiences who enjoyed the results either on TV or live at the many major events he helped organize, I lean towards 'off the ice.' On the other hand, as a skater, his innovations in music, routines, costume, cosmetics and general presentation transformed the look of ice dancing, broke ground for his contemporaries, and laid the foundations of so much that came later – not to mention the enduring inspiration of his awesome medal record. I think I'll sit on the fence and say they're about equal, if different in nature.
Q: Courtney and Bobby Thompson helped conceive the costumes for Jayne Torvill and Christopher Dean's iconic "Bolero" program and Courtney was actually one of the judges who gave them a perfect 6.0 at the 1984 Winter Olympics in Sarajevo. Jayne and Christopher's coach Betty Callaway was taught by Courtney's coach, that grande dame of skating Miss Gladys Hogg... so it was almost like a passing of a torch. Would you agree?
A: Yes – I suppose such situations are inevitable given the small number of top-level coaches, and the relatively large number of students they train. it's rather nice to think of the learning and influence being passed on to future generations of skaters and coaches as they were during Britain's post-War ascendancy in the sport, and in Courtney's competitive heyday. Incidentally, in his shoes I'd have given Jayne and Chris 6.0 too – I still find 'Bolero' so perfect I cry when I watch it.
Q: What will surprise people the most about Courtney's story?
A: Hard to say, it's so full of surprises! I was particularly struck by the number of lucky flukes which brought him to exactly the right people, at the right time, in the right place, and by the extent of his impact on the wider world. For instance, I'd had no idea that Courtney was so instrumental in creating outsize fashion and bringing clothes for larger women out from the back of the store and onto the High Street - although it's something I remember distinctly from the seventies, when Evans opened the first dedicated size 14+ shop in my hometown. His medal tally is also amazing, especially considering it was achieved with two partners he'd only known for a few months, one of whom had never previously competed in the discipline and didn't even know the compulsory dances - an almost superhuman feat by Doreen Denny.
This all came as a long, slow reveal while I was working minutely on the text, pulling the narrative together from the various drafts, notes and anecdotes Courtney had amassed over two years of writing, plus contributions from Robin Cousins, Christopher Dean and Jayne Torvill – and like an Impressionist painting, the full incredible picture didn't reveal itself until I sat back and proof-read the whole thing. Then I thought, 'Wow! Truth really is stranger than fiction.'
When will the book be coming out and how can people get a copy?
A: We hope that "Around the Ice in Eighty Years: An Irreverent Memoir by an Accidental Champion" will be ready by Christmas, or February 2022 at the latest. You can order it directly from YPS, via your local bookshop or Amazon; meanwhile I'll gladly receive expressions of interest or advance orders on her.story@hotmail.co.uk. And as soon as I've knocked together the full blurb with bibliographic and ordering details, I'll send it on – watch this space!
Skate Guard is a blog dedicated to preserving the rich, colourful and fascinating history of figure skating and archives hundreds of compelling features and interviews in a searchable format for readers worldwide. Though there never has been nor will there be a charge for access to these resources, you taking the time to 'like' the blog's Facebook page at http://www.facebook.com/SkateGuard would be so very much appreciated. Already 'liking'? Consider sharing this feature for others via social media. It would make all the difference in the blog reaching a wider audience. Have a question or comment regarding anything you have read here? Have a suggestion for a topic related to figure skating history you would like to see covered? I'd love to hear from you! Learn the many ways you can reach out at http://skateguard1.blogspot.ca/p/contact.html.
Posted by Skate Guard Blog at August 26, 2021
Email ThisBlogThis!Share to TwitterShare to FacebookShare to Pinterest
Newer Post Older Post Home