The Poison And Power Of The Pen 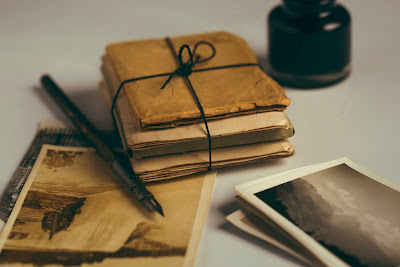 In the roaring twenties, a duo of Austrian twentysomethings named Elisabeth 'Lilly' Scholz and Otto Kaiser were one of the most successful pairs teams in the world. Vienna born Otto and Graz born Lilly were known for their athletic and daring style. Otto's weightlifting background allowed them to perform lifts that were considered quite acrobatic for the time, and their early incarnation of a death spiral was a highlight of all of their performances. They won their first of four national titles in 1924 and the following year won their first medal at the World Championships. They claimed the Olympic silver medal in 1928 and were the runner-up's at the World Championships for three years in a row, narrowly losing twice in three-two split's of the judging panel. Their greatest success came in 1929, when they won the World pairs title in Budapest. 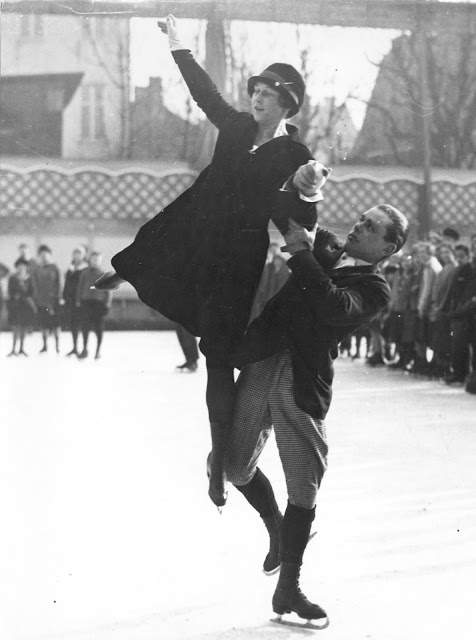 Lilly Scholz and Otto Kaiser. Photo courtesy Wiener Eislaufverein.
In late September of 1929, Lilly married Hans Gaillard and decided to hang up her skates. Otto chose to continue his training and soon paired up with Hansi Kast. After a year off the ice, Lilly missed the thrill of competition and teamed up with a man with the unfortunate name of Willy Petter. Lilly and Willy, as they were sometimes called, drew praise for their "difficult, effective and well executed" program, won two national titles and two medals at the European Championships from 1930 to 1932 and had starring roles in the ice revues "Das Verlobungsfest am Hofe des Eiskönigs", "Eislinde" and "Winterfried". Otto and Hansi struggled, finishing second to last at the 1931 World Championships and off the podium at the 1932 Austrian Championships. 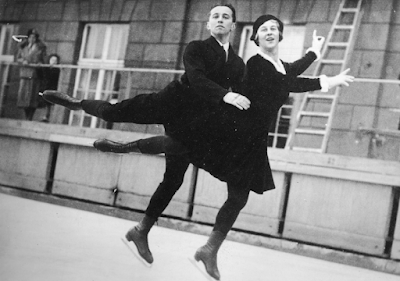 Lilly Gaillard and Willy Petter. Photo courtesy National Archives Of Poland.
In 1933, things started to unravel for Lilly and Willy. Despite giving two of their best performances, they narrowly lost the Austrian and European titles to Idi Papez and Karl Zwack. They were extremely disappointed and opted not to compete in that year's World Championships in Stockholm. Their decision was panned in the press. "Der Tag" criticized them for poor sportsmanship and on February 11, 1933, the "Wiener Sportagblatt" published a highly critical, anonymous letter claiming that the duo had used the excuse that they were "suddenly too tired to skate." 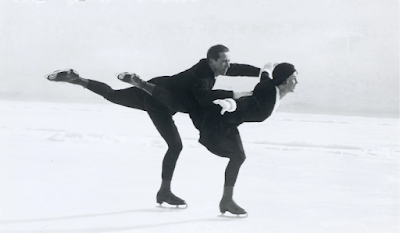 Lilly Scholz and Willy Petter
Five days later, Willy Petter sent a handwritten letter to the "Wiener Sportagblatt" that was published under the headline "Why Gaillard-Petter No Longer Skate". The Petter letter said, "We were, as stated in the article, hurt because we didn't win the last two competitions. Anyone who knows us wouldn't be so reproachful. I honestly don't understand, since we've been sporting over the course of the year. Career losses and wins and alternating orders have been made and we always accepted this without the word. We can, without being immodest, claim that both pairs belong to the same class and that... the decision of victory and defeat comes not only from the skating itself, but almost more in the attitude of the  judges - of their personal sympathy or from their fondness for the style of one or the other couple. It has evolved over the years that the skater is not only skating but also... must learn how these officials and these judges are to be traded. Expressing your own opinion as the most ridiculous little things can have an affect... Generations of skaters change, but the officials almost always remain the same, and then they remain still in office when younger ones have been there for a long time. These are perhaps less experienced officials, but they are more original in their thinking. But those are exceptions to the rule and many become entangled in the old ways... Under these circumstances, not only do we have to suffer, but also a lot of other skaters at the Wiener Eislaufverein. We don't just know each other, the skaters and the officials, but it is certainly no coincidence that in the last few years many transfers from the Wiener Eislaufverein to the artificial ice club took place. The conditions are more favorable there, especially because they are less complicated and the number of officials is significantly lower. The mood in general and various opinions have moved us, but that has nothing to do with sporting successes or failures. It would appear in the circles of the Wiener Eislaufverein that our resignation was by no means particularly painful."
Hans Pfeiffer, the President of the Österreichischer Eiskunstlaufverband, didn't take kindly to Willy Petter's letter, nor did the good folks at the Wiener Eislaufverein. Though Willy contacted the "Wiener Sportagblatt" in early April of 1933 to clarify that his letter was directed at club officials at the Wiener Eislaufverein and not competition judges, this had little effect. The Österreichischer Eiskunstlaufverband gave him a severe reprimand and unanimously voted in favour of a two-year suspension from competition. The unfortunate consequence of this was that it effectively ended the competitive career of World Champion partner Lilly, who had come out of retirement to skate with him in the first place. Willy went on to work behind the scenes with the Karl-Schäfer-Eisrevue and Wiener Eisrevue and Lilly faded into obscurity. 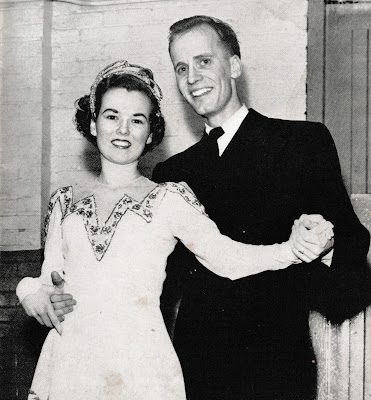 Frances Dafoe and Norris Bowden. Photo courtesy "Skating" magazine.
Willy may have been one of the first pairs skaters to openly criticize the powers-that-be in the skating world, but he wasn't the last. History repeated itself two decades later when World Champion Norris 'Norrie' Bowden had the courage to call out Canadian skating officials publicly in a letter that was mailed to over two hundred CFSA clubs. Though Norris' letter stated that "any opinions expressed are purely those of the writer", both he and his partner Frances 'Frannie' Dafoe were banned from judging for five years. 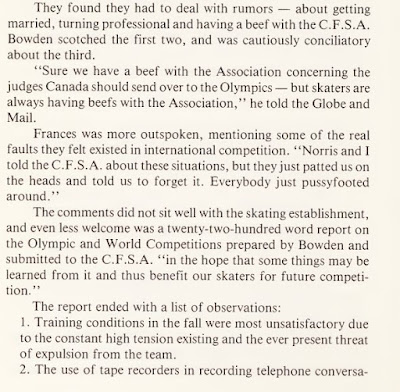 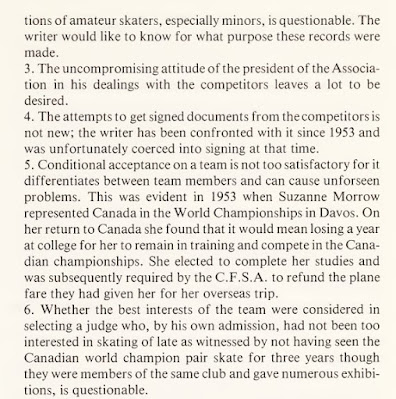 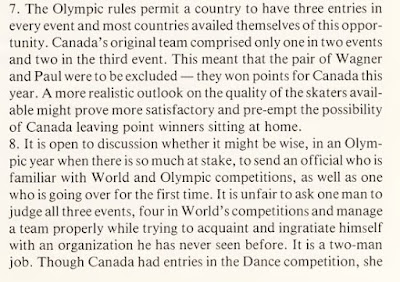 Excerpts from Norris Bowden's letter, republished in David Young's "The Golden Age Of Canadian Figure Skating"
Though Lilly and Willy and Frannie and Norrie faced very real consequences by standing up to their federations, their courageous actions enacted change. In the years leading up to World War II, top Austrian skaters continued to flock away from the Wiener Eislaufverein and in Canada, as David Young aptly wrote in his book "The Golden Age Of Canadian Figure Skating", "many of the improvements in competitions which [Frances Dafoe and Norris Bowden] fought for have been implemented, and are now accepted without question."
Gone are the days of skaters penning their grievances in cursive and heading to the post office. In our modern age of retweets, Instagram stories, press conferences and mixed zones, it is perhaps easier than ever for those in the sport to make their concerns heard. The skaters today who are using their voices to stand out against injustice and enact positive change in the sport deserve our respect and admiration, as do those who have spoken up on a wide range of important issues in years past - often at a great cost.
Skate Guard is a blog dedicated to preserving the rich, colourful and fascinating history of figure skating. Over ten years, the blog has featured over a thousand free articles covering all aspects of the sport's history, as well as four compelling in-depth features. To read the latest articles, follow the blog on Facebook, Twitter, Pinterest and YouTube. If you enjoy Skate Guard, please show your support for this archive by ordering a copy of figure skating reference books "The Almanac of Canadian Figure Skating", "Technical Merit: A History of Figure Skating Jumps" and "A Bibliography of Figure Skating": https://skateguard1.blogspot.com/p/buy-book.html.
Posted by Skate Guard Blog at April 26, 2022
Email ThisBlogThis!Share to TwitterShare to FacebookShare to Pinterest
Newer Post Older Post Home