When you dig through skating history, you never know what you will unearth. In the spirit of cataloguing fascinating tales from skating history, #Unearthed is a once a month 'special occasion' on Skate Guard where fascinating writings by others that are of interest to skating history buffs are excavated, dusted off and shared for your reading pleasure. From forgotten fiction to long lost interviews to tales that have never been shared publicly, each #Unearthed is a fascinating journey through time. This month's 'buried treasure' is an article called "The Mad English", which first appeared in the November 1949 issue of "Skating World" magazine. It was written by Swiss Champion Nigel Brown, the author of the outstanding book "Ice-Skating: A History". The article explores the impact of early British winter sports enthusiasts on Switzerland's skating culture - and the impacts of the Age of Austerity on skating tourism.

It used to be a common-place expression of the Swiss mountain villager to refer to the early English skaters that came to Switzerland in the '80's as the "Mad English." At first it was a term of indulgence, almost of adult tolerance for playful and charming strangers that to the rugged Swiss man of the mountains had not quite "grown up." Later it became a term of endearment, an amusing compliment for the citizens of the British Isles who came every year to the Alps for their pleasure. These holiday makers had found their way into the hearts of the hospitable Swiss and another strong link between the two nations had taken root.
Three-quarters of a century before the skaters came, the English traveller and holiday-maker came to the Alps.
Just after the Battle of Waterloo, when nearly all of Europe was still suffering from the effects of the Napoleonic Wars, the first English visitors came to Switzerland. They were the poets, Byron in a magnificentcarriage, Shelley on a donkey. The society of wealth and fashion followed in their wake and golden guineas flowed plentifully into the hands of Swiss hostelry along the shores of Lake Geneva. A George III guinea in 1816 glittered with regal splendour in the foothills of the Alps, for those English were rich and generous and its buying power was great.
The English poets were the first to sing Switzerland's song as a country of beauty and friendly land for travel. After them came the Alpinists, the pioneers of sport in Switzerland, their pockets heavy with golden sovereigns, and their hearts light with joy for the conquest of the Alps.
Together with the mountain guides of the little Swiss villages they formed ideal teams for the scaling of the alpine giants. The mountaineers pioneered the way to making Switzerland a land for holidays and healthy relaxation. After them came waves of English to the Alps seeking annual relaxation from the high and nervous tempo of a country that was in the full-blooded development of an industrial revolution. 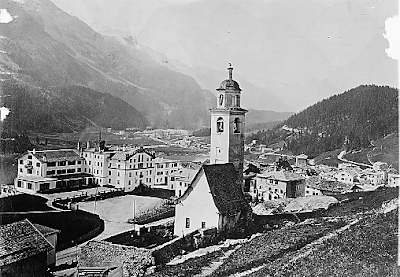 St. Moritz in summer. Photo courtesy Library Of Congress.
But these visitors all came in summer, and when the first snowfall tipped the lower mountain peaks and the autumn mists descended into the valleys, the lights of the hotels dimmed and finally went out as the last of the English visitors left Switzerland for home.
A blanket of deep snow descended all over the Alps, and the many little mountain villages carried on their quiet and primitive life throughout the winter months as they had done for centuries before.
Winter was a sad place in the Alps in the 50's and 60's, for laughter and gaiety that echoed there in the summer months had gone when the hotel closed its doors and winter threatened. Deep snows blocking the Alpine passes were insurmountable obstacles to the travellers. Then about the middle of the 70's a party of English tourists who had spent the summer in the Alps thought how novel and what fun it would be to spend a winter holiday in Switzerland.
They packed the skates they had used in the 'fen country' and also took the sleighs they had often used for sliding down Hampstead Heath and set off for St. Moritz, the spa that was then known all over Europe for its healing waters and was a rendezvous of fashion in the summer months.
At Chur, which is now the rail-head of the famous Rhätische railway and takes the modern traveller via the Albula tunnel in two and a half hours to St. Moritz, the travellers of the 70's were obliged to hire a coach and travel along the route the Romans took over the Julier Pass and descend on the village of St. Moritz from the south instead of the present day northern cut. It took them three weeks, for heavy snows blocked the pass and blizzards howled at 8,000 feet, but all the rage of a winter's fury did not deter these winter sports pioneers.
When the news of their arrival spread round the village, the local inhabitants thought they were mad, for who but the English would wish to come in the depth of a winter to a Swiss mountain village 6,000 feet up to shut themselves in a half-open hotel while the cold inhospitable winter reigned in the mountains.
The epithet 'the Mad English' seemed right and proper in explanation of such behaviour.
Next morning with spades and brooms they were clearing a small corner of the frozen lake with snow and in the afternoon were skating on the natural ice of St. Moritz. This was an extraordinary spectacle for the sharp-eyed men of the mountains to behold, but a greater surprise for their ears to hear the gay laughter of the English in their mountains in winter-time.
Skaters valsing on ice in Switzerland. Photo courtesy National Heritage Institute, Bucharest.
A few days later the village band seated close by the lake edge was accompanying the skaters' graceful gyrations upon the ice with tuneful melodies of mountain music. In the evenings the English tourists would visit the native 'Stueblis' where a mountain orchestra made up of concertina and zyther placed gay music while Swiss and English danced the night away.
The figure-skater was the forerunner of winter sports. He was also the inspiration of the luxury hotel in the mountains in winter. Group of skaters on the ice at Davos, 1912
A new era in the Alps was born, and other summer visitors to Switzerland discovered other spots that would make excellent places for a winter sports holiday. Davos, already renowned for its healthy position, became at a very early period of winter tourist development, a centre for figure skaters from the British Isles. The English Skating Club of Davos was the forerunner of what may be now referred to as the most famous ice skating club in the world, "The International Skating Club of Davos." It was the English figure skater who plabed the first rink at Davos, and today Europe's finest and largest open-air mountain ice arena is in Davos.
The English figure skater did much to make Switzerland a happy playground of health and fun in winter-time. Ever since those pioneer days over the Julier Pass in the 1870's he has been coming out to the Alps to enjoy his winter skating. Two great wars have been the only interruptions over a period of more than eighty years. 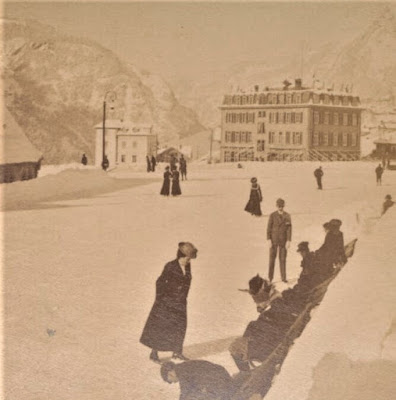 Skaters at Grindelwald, 1901
Now that the pound has been devalued and has sunk to the extremely low rate of about twelve francs, figure skaters who planned to visit Switzerland have been dealt a terrible blow. With money allowance at a restricted minimum, the devaluation means a further 31% loss, which in many cases mames a winter skating holiday fade into the background.
But encouraging news comes from Bern, where hopes are high that both Swiss and British financial circles will come to a successful agreement in the creation of the tourist franc, valued at 15.50 to the pound.
To some even then it may seem a venture of the "Mad English," for a holiday with so little money, but then they have always done unusual things and been all the happier for it.
Skate Guard is a blog dedicated to preserving the rich, colourful and fascinating history of figure skating and archives hundreds of compelling features and interviews in a searchable format for readers worldwide. Though there never has been nor will there be a charge for access to these resources, you taking the time to 'like' the blog's Facebook page at http://www.facebook.com/SkateGuard would be so very much appreciated. Already 'liking'? Consider sharing this feature for others via social media. It would make all the difference in the blog reaching a wider audience. Have a question or comment regarding anything you have read here? Have a suggestion for a topic related to figure skating history you would like to see covered? I'd love to hear from you! Learn the many ways you can reach out at http://skateguard1.blogspot.ca/p/contact.html.
Posted by Skate Guard Blog at May 28, 2022
Email ThisBlogThis!Share to TwitterShare to FacebookShare to Pinterest
Newer Post Older Post Home