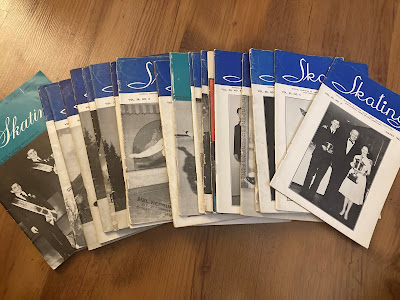 Every Skate Guard blog that is put together draws from a variety of different sources - everything from museum and library holdings and genealogical research to newspaper archives and dusty old printed materials I've amassed over the last ten years or so. This year, I thought it would be fun to give you a bit of a 'behind the scenes' look at the Skate Guard Collections, which include books, magazines, VHS tapes, show and competition programs, photographs and many other items. These Collections date back to the nineteenth century and chronicle figure skating's rich history from the days of quaint waltzes in coats and tails to quadruple toe-loop's. Whether you're doing your own research about a famous 'fancy' skater in your family tree or a long-lost ice rink in your community or just have a general skating history question you can't find the answer to online, I'm always happy to draw on these resources and try to help if I can. 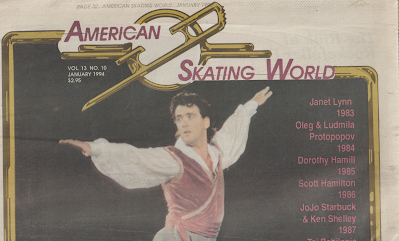 This month, I'd like to talk about one of my favourite part of the Collections, which also happens to be one of the biggest: magazines! Skating-specific periodicals date back to the Victorian era, when a small handful of European publications like "Le Patineur: journal illustré spécial" entertained skaters with essays about the health benefits of the sports, poetry, news and advertisements for the latest on-ice garments from Parisian fashion houses. Over the years, dozens upon dozens of skating magazines have made their mark - "The Canadian Skater", "Skating", "Blades On Ice", "International Figure Skating", "Patinage", "Pirouette" and "Skating World" proving to be some of the most popular.

In the Skate Guard Collections, there is almost a complete set of U.S. Figure Skating's magazine "Skating", dating back to the roaring twenties, a large collection of British skating magazines including issues of "The Skating Times", "Skating World", "Ice Skating", "Winter Sports" and "The Skater" dating back to the forties, issues of "American Skating World" from the 1990's and 2000's and several other titles. These magazines are literally a fountain of information, chronicling competitions and shows and providing crucial details about the careers and lives of skaters that you simply won't find by plopping their names in a search engine. Most importantly, I think, skating magazines act as a sort of a time capsule. The advertisements, articles and photographs in each issue offer a real sense of what was relevant and important in the sport where they were published at that point in history. 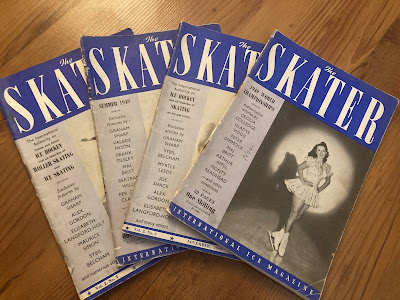 As an example, an issue of "The Skater" published in England in October of 1949 includes an article on winter skating holidays in Switzerland, an advertisement for a gala ice show in Belfast starring Jeannette Altwegg, calendars of upcoming competitions and shows, an editorial on the Stoll Theatre by Howard Bass, skating tips from World Champion Henry Graham Sharp and N.S.A. Gold Medallist and instructor Myrtle Leeds, a 'personality parade' outlining what skaters were up to, an article on ice dancing by N.S.A. Ice Dance Committee member and judge Alex D.C. Gordon, a fashion spotlight, photographs and skate advertisements. In contrast, the November 1949 issue of the American magazine "Skating" offered news about summer schools, coaching changes and skating clubs, a biography of the new USFSA President Harry N. Keighley, an article on being a skating parent by Ginny Baxter's mother Margaret, changes to competition and ice dance rules, a report on the ISU Congress, a list of births, engagements and marriages, obituaries for Paul Armitage, John S. MacLean and Sandy Macdonald and a list of new skating merchandise on the market, including two new models of Strauss skates, Barnard skate guards and Peggy Tomlins' book on her talented brother Freddie, who was killed during World War II. 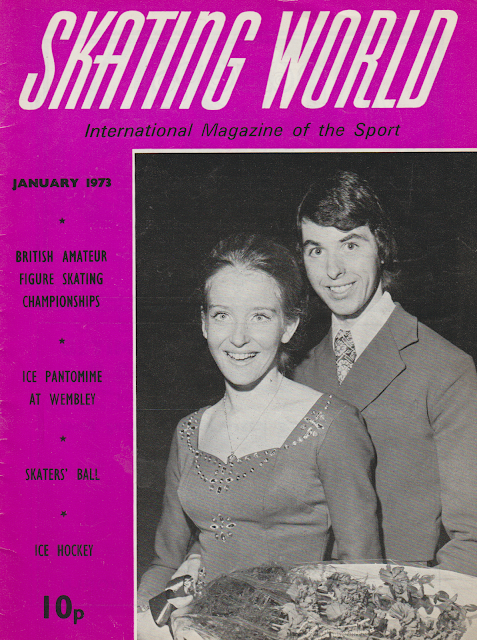 Without question, I wouldn't be able to do what I do without access to these wonderful magazines which - let's face it - were never intended to survive as long as they have! For a list of the magazines already in the Skate Guard Collections, click here. If you've got magazines collecting dust in your attic or basement that you'd like to donate, I'd love to hear from you!
Skate Guard is a blog dedicated to preserving the rich, colourful and fascinating history of figure skating and archives hundreds of compelling features and interviews in a searchable format for readers worldwide. Though there never has been nor will there be a charge for access to these resources, you taking the time to 'like' the blog's Facebook page at http://www.facebook.com/SkateGuard would be so very much appreciated. Already 'liking'? Consider sharing this feature for others via social media. It would make all the difference in the blog reaching a wider audience. Have a question or comment regarding anything you have read here? Have a suggestion for a topic related to figure skating history you would like to see covered? I'd love to hear from you! Learn the many ways you can reach out at http://skateguard1.blogspot.ca/p/contact.html.
Posted by Skate Guard Blog at September 02, 2022
Email ThisBlogThis!Share to TwitterShare to FacebookShare to Pinterest
Newer Post Older Post Home