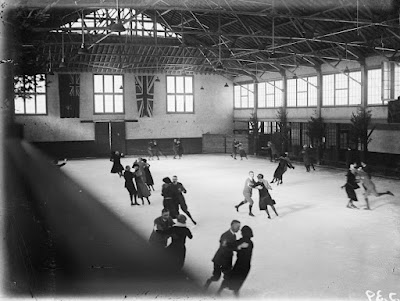 Photo courtesy City Of Toronto Archives
"The compulsory dances are to the ice dancers what the scales of the piano are to the pianist. That's where you learn good technique and that's where you practice the basics." - Tracy Wilson
Though it's been over a decade since a full compulsory dance has been skated in an ISU Championship, compulsory dances play both an important part in ice dancing's history and future. Many of the sport's great champions were first introduced to the discipline by learning the steps of the Dutch Waltz, Canasta and Baby Blues... and until 2010, all of ice dancing's greatest champions showed off their finest footwork in complex compulsory dance patterns.
When ice dancing was first introduced at the World Championships in 1950, couples had to perform no less than four compulsory dances, along with a free dance. In those days, dances were drawn from four groups: waltzes, foxtrots, fast dances like the Paso Doble or Quickstep and slower dances like the Tango or Blues. Interestingly, when ice dancing was first introduced at the Olympic Games as a demonstration event in 1968, couples had to skate a three and a half minute free dance, an Original Set Dance (precursor to the OSP) and no less than five compulsories! Two couples skated each compulsory dance at the same time, starting at opposite ends of the rink. 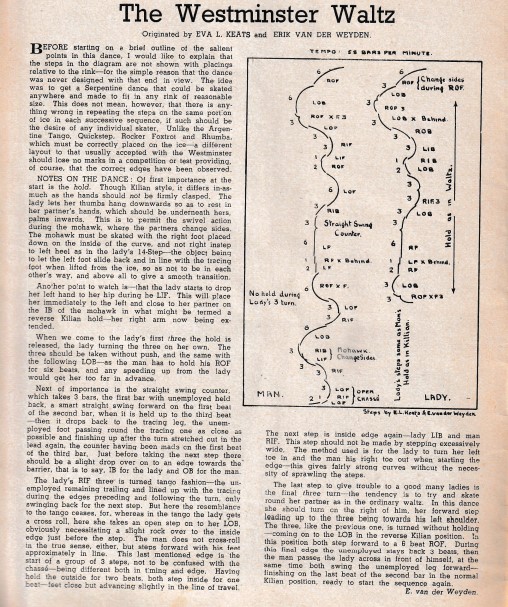 1946 "Ice Skating" magazine article by Erik van der Weyden, inventor of the Westminster Waltz
By the luck of the draw, certain compulsory dances were skated at major events far more than others. The Argentine Tango and Paso Doble were skated at the World Championships more than fifteen times. The following tables highlight each compulsory dance's selection at the Winter Olympic Games and World Championships and the highest scoring compulsory dances skated under the IJS System.
Jayne Torvill and Christopher Dean's Blues at the 1994 Winter Olympic Games in Lillehammer

COMPULSORY DANCES SKATED AT THE OLYMPICS AND WORLD CHAMPIONSHIPS

Three compulsory dances are missing from this listing. Through reports and discussions with former competitors, it was determined that 2/4 of the dances in 1963 were the Quickstep and Argentine Tango and 3/4 dances in 1967 were the Rocker Foxtrot, Tango and Paso Doble.