How The Almanac of Canadian Figure Skating Was Made 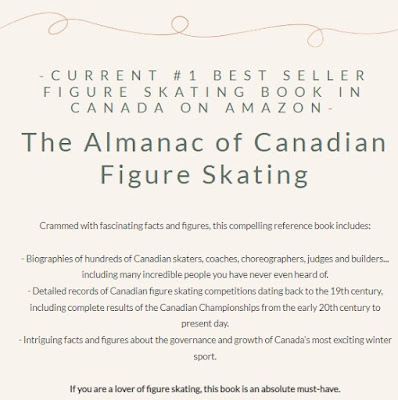 Over the last decade of writing Skate Guard, there have been times that I thought to myself, "How many more stories about figure skating history could there possibly be out there?" Every single time, without fail, an idea - or ideas (plural) - have simply presented themselves. The truth is, there will always be more about this fabulous sport's history for us to learn.
The premise for "The Almanac of Canadian Figure Skating" came about after I consulted a wonderful reference book by late sports journalist and baseball commentator Bob Ferguson. Bob published his first edition of "Who's Who in Canadian Sport" in 1977 and in the years that followed, three updated editions were released. 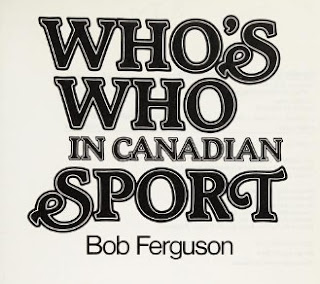 Bob Ferguson's books contained short biographical stubs of hundreds of great Canadian athletes - hockey, rugby and soccer players, gymnasts, swimmers and curlers among them. Obscure sports like roller skiing were even included. And yes, look it up - it is a thing! Less than twenty-five figure skaters were included in the first edition. By the time the final edition was published in 2005, figure skating had considerably more representation. I thought to myself why shouldn't there be a book like this about figure skating?
Putting together the biographies was a massive undertaking. First I had to make a list of all of the skaters, coaches, judges and builders I wanted to include. Then I had to try to find birth (and sadly, in many cases, death) dates and places for each. I combed through dozens of sources to find the information I needed to do a little blurb on each person. I consulted everything from newspaper archives to books, magazines, Sports Hall of Fames from coast to coast, government records of Governor General's awards, war records, videos and even genealogical records. Along the way, some people had to be eliminated because of missing information. Many new names were also added.

A clipping of the master file used as a starting point for the biographies included in the book
I tried my best to include not only the Canadian skating stars everyone knows and loves, but many others whose stories have gone untold. There are firsts from people of colour and people of Asian heritage. The contributions of LGBTQ+ skaters are celebrated. Skaters who excelled in disciplines that have been underrepresented in past coverage of the sport's history like fours and precision (synchro) skaters, Atlantic Canadians and Francophone skaters all made the cut. 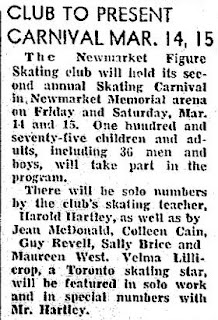 A clipping about Harold Hartley, one of Canada's first coaches of colour, whose story is featured in the book
Initially, that first section of the book - the Who's Who of Canadian Figure Skating - was going to be it. Then I decided to tackle what turned out to be an even more daunting process... reconstructing the results of the Canadian Championships going back to the very beginning. If you Google "Canadian Figure Skating Championships", Wikipedia will of course pop up. The results on there are quite incomplete. The earliest you'll really find more than the top three in any discipline is 1996 and several of the years after that are missing novice results. Prior to 1996, the top three are listed, but there are errors - particularly in the very early years. A table of junior medallists starts in 2006, exactly a century after the first prize for young skaters was awarded at the Canadian Championships.
Tracking down these missing results was no easy feat. I had to sift from over a century of newspaper archives and books to find many of them. The archives of "Skating" magazine were invaluable, but complete results stopped being published around the time "The Canadian Skater" came out. Because no digital archive of the magazine exists, I had to borrow bound editions of the latter magazine from a library to fill in certain missing events. There were still many missing years I had to find elsewhere. To get the results from the 1981 Canadian Championships here in Halifax, for instance, I had to go old school and use a microfiche reader at a library. 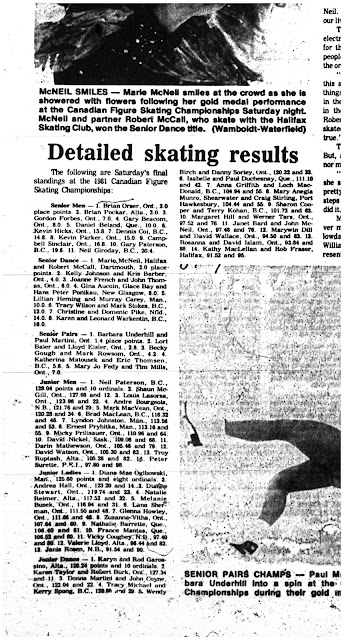 Microfiche file of results from the 1981 Canadian Championships
Other interesting facts and figures were added to the manuscript and I did a lot of editing and cross-referencing to ensure that the information included was as complete and factual as possible. Then began the real fun... prepping my self-published book for publication. Researching and writing I can do, but trying to figure out things like margins, page bleeds and spine dimensions was like reading a stereo catalogue in a foreign language. I had about as much luck at first as I did the first time I tried to put together a rolling stand from IKEA. The finished result is nothing flashy, but the information contained inside is truly fascinating stuff.
Next came my crash course into the wonderful world of book marketing. I could write another blog on that itself, but instead I'll just encourage to pick up a copy of this little book that could. If you love Canadian figure skating, I can absolutely promise you that you will learn things about the sport you didn't know before. 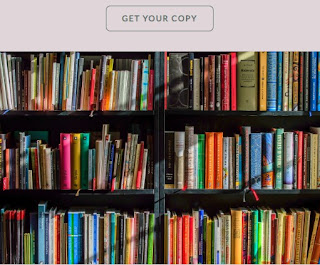 The book is available worldwide on Amazon in hard cover, paperback and Kindle E-Book editions. If you are down in the States, you can also pick up a copy through Barnes & Noble.
A quick note to those of you ordering via Amazon. Paperbacks are printed here in Canada; hard covers in the States. There is a 2-3 week printing delay for hard covers. If you are ordering hard cover books as Christmas gifts, I would highly recommend buying them in November for this reason. Paperbacks ship really quickly and Kindle E-Books, of course, show up in your library instantly. The E-Book is of course free if you have Kindle Unlimited. Get your copy today - they make great Christmas gifts for skaters, fans, coaches, test partners and judges!
If you have already received your copy of the book, it would be a huge, huge help if you could leave a short review on Amazon or Barnes & Noble so that more people are able to find it.
Skate Guard is a blog dedicated to preserving the rich, colourful and fascinating history of figure skating and archives hundreds of compelling features and interviews in a searchable format for readers worldwide. 'Like' the blog's Facebook page at http://www.facebook.com/SkateGuard. Already 'liking'? Consider sharing this feature for others via social media. It would make all the difference in the blog reaching a wider audience. Have a question or comment regarding anything you have read here? Have a suggestion for a topic related to figure skating history you would like to see covered? I'd love to hear from you! Learn the many ways you can reach out at http://skateguard1.blogspot.ca/p/contact.html.
Posted by Skate Guard Blog at November 16, 2022
Email ThisBlogThis!Share to TwitterShare to FacebookShare to Pinterest
Newer Post Older Post Home