The Hallowe'en Holocaust: A Closer Look At The 1963 Holiday On Ice Explosion 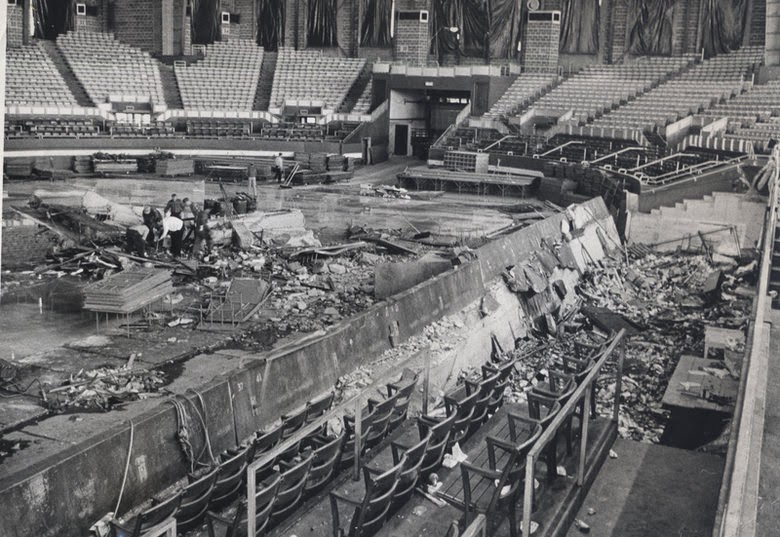 I've long been a fan of the wonderful work done by Allison Manley and PJ Kwong on their respective Manleywoman SkateCast and Open Kwong Dore podcasts. Considering I didn't have a sweet clue about interviewing people when I started the blog last year, I really admire and look up to both Allison and PJ for what they continue to accomplish in doing these important interviews. Sadly though, I hadn't found time to listen to a lot of the less recent ones. That all changed in June. I decided to take a break from my usual routine of listening to music while working my day job and went on a three week bender of playing catch up on many of the interviews I had missed. My jaw dropped and my head shook back and forth in sheer disbelief when I listened to Allison's 2008 interview with iconic coach Ron Ludington. I think I even said "what?" out loud. Ludington shared the story of what he called 'The Hallowe'een Holocaust', an explosion at the Fairgrounds Coliseum during a Holiday On Ice show on October 31, 1963 that injured four hundred and killed between seventy and ninety. How had I never heard of this horrible tragedy?!

After listening to Ludington's gruesome first hand account of the tragedy, I set out to learn more about what happened that day. It was one of Indiana's greatest tragedies. An archival article "1963 Coliseum explosion killed 74" from the Indianapolis Star provides detailed background on just what happened that day: "It was opening night for the Holiday on Ice show, with more than 4,000 spectators on hand. Propane, being used to keep pre-popped popcorn warm, was leaking from a faulty valve. At 11:04 p.m. an explosion sent bodies flying nearly 60 feet. A second blast took place a few minutes later, caused by heat rising and air rushing into the vacuumized area. The victims were either severely burned or crushed by concrete. Indianapolis was not equiped to handle the volume of dead. Coroner Dennis Nicholas elected to use the Coliseum as a makeshift morgue. The bodies were placed on plywood and lined up on the ice according to gender and age. Family members passed through the rows of bodies to identify their loved ones. Sixty five people were killed that evening and eight others would die in the days and weeks that followed. The 74th victim died Feb. 7, 1964. On Dec. 19, 1963, a Marion County grand jury indicted State Fire Marshal Ira J. Anderson and Indianapolis fire chief Arnold W. Phillips on misdemeanor charges of failing to inspect the Coliseum. Edward J. Franger, president of Discount Gas Corp; Fred Helms, Discount's vice president; Richard Ensign, Discount's Indianapolis manager; Coliseum manager Melvin Ross; and Coliseum concession manager Floyd James were charged with manslaughter. There was only one conviction. Franger was found guilty of assault and battery. That verdict was later overturned by the Indiana Supreme Court. In the end victims and survivors received about $4.6 million in settlements." Among the dozens who perished in the tragedy was former Lafayette mayor Dwight Keim.

Thomas Drabek's case study "Disaster In Aisle 13 Revisited" states the explosion actually occurred at 11:06 PM and not 11:04 and provides the exact number of spectators of that fateful show as 4327, also correcting the death toll to eighty two in total, higher than the toll listed in the Indianapolis Star archival article and more in line with the number that Ludington suggests in his interview with Allison. He examines and theorizes in depth as to the social science behind disaster research with relation to the response to this particular tragedy.

As I continued to dig a little deeper, the details became even more macabre. Dale Burgess' article "Coliseum Explosion 62". Burgess explained that at the time of the explosion, the stars of the show were waiting behind the curtains for the show's later finale as an ensemble group performed "a gay Dixieland" number as bodies, many of them wrapped in mink, "erupted onto the ice". Almost reminiscent of Wallace Hartley and the other musicians of the Titanic playing music until the ship was lost beneath the waves of the Atlantic Ocean, Burgess states that after the blasts "the band kept playing in the best tradition of show business, and the skaters hurried off the ice to make way for rescue teams". Walter Spangler, a Shriner who was in attendance that horrific night gave his account of the tragedy: ""About 90 percent of the crowd, like myself, were Shriners and their families. We were sitting almost directly opposite the explosion and the show was virtually over. Suddenly there was a dull thump. It wasn't an explosion as you usually think of one. There was no percussion. Immediately there was a tremendous column of fire - about 15 feet in diameter, and 40 to 50 feet high. Along with it was literally a column of bodies. I saw dozens of people flying through the air. Their arms and legs outspread. Then there was just screaming,"

Here's where things go from horrific to just plain unusual. In Lori Sankowsky's book "Ghost Hunter's Guide To Indianapolis", she recounts a story of her visit to what is now the Pepsi Coliseum. Like something off Most Haunted, Lori and her companion Keri heard audible clicks in the silence of the arena that stopped when they asked "is someone there?" and experienced sensations of overwhelming heat even though their infrared thermometer had not changed from their initial reading of sixty seven degrees. The book includes a photo showing a red orb appearing near aisle thirteen of the rebuilt arena where by accounts the apparition of a woman has been seen previously. Whether you believe in that kind of thing or not, it's certainly not the first time a rink has been considered haunted. I learned all about that when writing Skate Guard's Hallowe'en Spooktacular.

In any event, the tragedy known as 'The Hallowe'en Holocaust' may not be as well known as the horrific plane crash that killed the entire U.S. figure skating team only two years previously but like the victims of that fateful plane crash, the victims of that 1963 explosion at the Holiday On Ice show at the Fairgrounds Coliseum in Indianapolis absolutely deserve to be remembered.

Skate Guard is a blog dedicated to preserving the rich, colourful and fascinating history of figure skating and archives hundreds of compelling features and interviews in a searchable format for readers worldwide. Though there never has been nor will there be a charge for access to these resources, you taking the time to 'like' on the blog's Facebook page at http://www.facebook.com/SkateGuard would be so very much appreciated. Already 'liking'? Consider sharing this feature for others via social media. It would make all the difference in the blog reaching a wider audience. Have a question or comment regarding anything you have read here or have a suggestion for a topic related to figure skating history you would like to see covered? I'd love to hear from you! Learn the many ways you can reach out at http://skateguard1.blogspot.ca/p/contact.html.
Posted by Skate Guard Blog at October 29, 2014
Email ThisBlogThis!Share to TwitterShare to FacebookShare to Pinterest
Newer Post Older Post Home
"As a rule an author has one or two popular ways of contrasting the past with the present. He can treat the past as lying in comparative doleful ignorance, or he can explain that the past was infinitely superior to the day we live in. Of course, either method is the popular journalism of the moment, and in reality there is no sharp contrast, but a gradual transition which leads the past into the present." - Joel B. Liberman, Skating Club Of New York