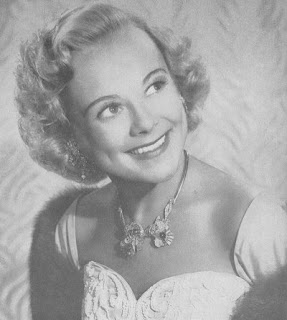 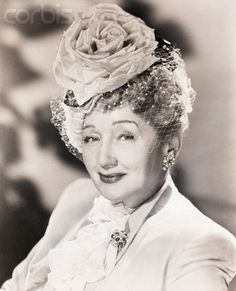 Academy Award winning actor Spencer Tracy kicked her in the derriere at a West Hollywood nightclub. "Citizen Kane" star Joseph Cotten pulled her chair out from under her at a charity benefit.
Femme fatale Joan Bennett sent her a skunk with a note that read, "Won't you be my valentine? Nobody else will. I stink and so do you." At one time, hat loving actress and gossip columnist Hedda Hopper was one of the most despised people in Hollywood.

Keeping tabs on the lives of celebrities was Hopper's full time job and it is no surprise that three time Olympic Gold Medallist, ten time World Champion and Twentieth Century Fox star Sonja Henie often popped up in her columns. Quite interestingly, Hopper, a staunch Republican who played a major role in the whole blacklist debacle took little digs at Henie in the early forties but backed off her considerably as the decade wore on. Compared to much of the venom she spewed about other top Hollywood actors and actresses of her era, her coverage of the Norwegian star was after 1943, mostly either saccharine sweet or trivial. She always included Sonja on her annual lists of the richest and most influential female celebrities in Hollywood though!

Hopper visited Henie on the set of "Sun Valley Serenade" in May of 1941, noting that the skater and John Payne "spent the afternoon clad in heavy ski clothes and huddled before a fire for a scene" on a day where the temperature was above thirty degrees. Then two years later on May 2, 1943, she turned her nose up at the star, printing a story about Henie being turned down by Warner Brothers: "The first time Sonja Henie performed on skates here, and before any one but Sonja thought of her as a movie bet, Holly brought her to Warners' for a screen test. Unfortunately, even the casting director refused to see her, and Holly was stymied. When he went backstage to ask if her she was interested in pictures she replied: 'Yes - but I do vant just to do a bit with skates. I vant to be the vun who is in luff with the leading man!' And when he asked if she could act she said, 'Any one who is a champion must have intelligence enough to be a good actress!' (Well, the jury's still out on that one.)"


Perhaps Henie and Cesar Romero's 1943 film "Wintertime" converted Hopper into a Henie fan, because aside from idle gossip linking her romantically to stars Michael North, Dan Topping and Steve Crane, she really was surprisingly kind to Henie! In one column, Hopper pointed out how polite she was to her dinner companion on set at a film. On another on July 30, 1944, she gleamed, "Sonja Henie, with a new chassis and streamlined hairdress was the center of attraction" at a garden party. That autumn, when discussing how Henie expressed an interest in taking on more serious roles, she said, "If our little skater's set her mind on it - she'll do it!"

Hedda Hopper's Henie compliments continued on June 11, 1948: "When I visited Sonja Henie in her dressing room on the set of 'The Countess Of Monte Cristo,' I found her and her mother planning the entertainment for 300 guests at her annual party. Last year only half of her tennis court was covered; this year the tent will cover it all. Sonja was taking care of an infected finger. She was about to do a scene in a one-piece black lace slip; and I must say that her chassis is as streamlined as some of those figures she cuts on ice."

Just how did the Norwegian manage to escape the clutches of the gleeful gossip columnist that many Hollywood stars of the era viewed as a pariah? Simple! Sonja gave Hedda Hopper access. In her 1981 memoir, Ingrid Bergman noted, "Sonja was in the top bracket so her parties were among the best in Hollywood." The delightful Ann Miller, in Edvard Hambro's 1995 documentary "Sonja Henie: Queen Of The Ice" gushed, "Every star in Hollywood would be there. Producers and directors... people like Marlene Dietrich, Merle Oberon, Ty Power (who was also at one point in her life very enamoured [with] her), Clark Gable... I could go on and on. The stars she had there!" By inviting Hedda Hopper to these lavish parties and welcoming her when she showed up on film sets and skating rinks for interviews, Henie provided Hopper the captive audience she needed to do her job. In turn, she received good press. Carol Channing also noted that when the Istanbul Hilton opened, she was on the same press junket flying from Hollywood to France to Turkey with both Hopper and Henie.

Inviting the tiger into your den is only wiser than keeping them locked outside if you are the one with the upper hand, and Sonja Henie, whatever you might say about her, was a very smart businesswoman.

Skate Guard is a blog dedicated to preserving the rich, colourful and fascinating history of figure skating and archives hundreds of compelling features and interviews in a searchable format for readers worldwide. Though there never has been nor will there be a charge for access to these resources, you taking the time to 'like' on the blog's Facebook page at http://www.facebook.com/SkateGuard would be so very much appreciated. Already 'liking'? Consider sharing this feature for others via social media. It would make all the difference in the blog reaching a wider audience. Have a question or comment regarding anything you have read here or have a suggestion for a topic related to figure skating history you would like to see covered? I'd love to hear from you! Learn the many ways you can reach out at http://skateguard1.blogspot.ca/p/contact.html.
Posted by Skate Guard Blog at March 15, 2016
Email ThisBlogThis!Share to TwitterShare to FacebookShare to Pinterest
Newer Post Older Post Home