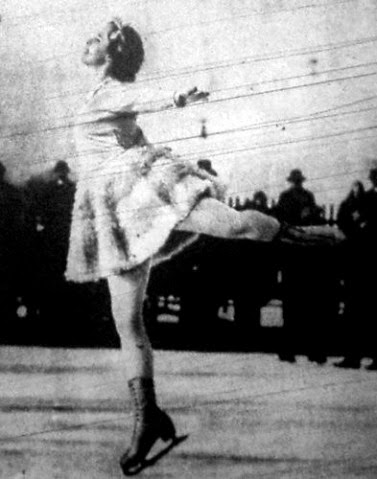 "Vivi-Anne Hultén, a skater who, in my opinion, has never been given her full dues, is the supreme example of art in free skating. Hers is skating unadulterated; she owes nothing to ballet or to anything but skating. She is the true exponent of the art of skating in its purest form." - Captain T.D. Richardson

Vivi-Anne Hultén was born August 25, 1911 in Antwerp, Belgium. She returned with her parents to their native Sweden where she started skating at the Stockholms Allmänna Skridskoklubb at a young age after showing promise in skiing as well. She was coached by Lars Grafström, the brother of none other than three time Olympic Gold Medallist Gillis Grafström. After winning her first in a long slate of Swedish national titles in 1927, Vivi-Anne entered the very first European Championships for women held in Vienna in 1930. She won the bronze medal behind Austrians Fritzi Burger and Ilse Hornung and was hailed by Swedish newspapers as "The Flame Of Sweden".

An obituary written in 2003 by skating historian Dennis Bird gives some insight into a romance the young Swedish skater had around that time of her life: "She attracted the attention of a young Englishman who was himself no mean skater. He later became famous as Sir Peter Scott, artist, ornithologist and yachtsman. In his 1961 book 'The Eye of the Wind', he wrote of a new princess working quietly at Rockers in mid ice-rink: 'It did not take me long to discover that she was the champion skater of her own Scandinavian country. My little champion knew how to move, how to dance, she also knew how to draw. And she was delightfully pretty. So long afterwards, I find it difficult to assess this romance of 30 years ago, but it was something gentle and tender and altogether happy. I discovered real humility for perhaps the first time. I simply was not good enough for her.' Scott did not name her in his autobiography, and in the 1990's another skater was suggested as a claimant. But Hultén telephoned me from her home in America and confirmed that it was indeed she who cherished similar fond memories of that relationship. Scott was sufficiently impressed to follow her to Berlin in 1931, when she was placed fifth in her first world championship. [Sonja] Henie, in her memoirs, "Wings On My Feet" (1941), wrote of Vivi-Anne as 'Sweden's rising national champion who by 1931 was already crowding the line'. 1932 was an Olympic year and in the Winter Games at Lake Placid, the Swede came fifth. Her best year was 1933, when she beat every other skater except Henie, to take the silver medal in the world championship on home ice in Stockholm." 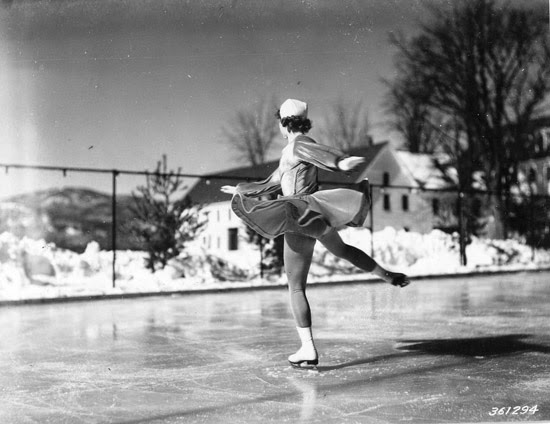 The fact of the matter is that although Vivi-Anne's career was full of impressive achievements including two European medals, four World medals and that Olympic bronze medal in 1936, she was yet another in a long line of casualties unable to beat Sonja Henie during her controversial ten year reign at the top of the skating world... and there was certainly no love lost between the two Scandinavian ice queens. 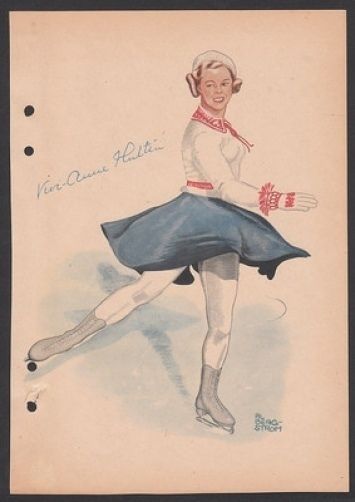 In the nineties, Vivi-Anne told a "Sports Illustrated" magazine reporter, "Look, I have a great admiration for what Henie did... On the ice she was terrific, a wonderful acrobat, just like a circus princess, a big smile, dressed perfectly. But she was Dr. Jekyll and Mr. Hyde, a very nasty person off the ice... I'm just telling it like it is." A 2003 article from the "Los Angeles Times" relayed several tales of the rivalry between the two famous thirties skaters with the last name beginning with 'H': "The rift began at the 1933 world championships, when Hultén finished only two-tenths of a point behind Henie. 'You are not nearly good enough to get second next to me,' Henie screamed afterward, pointing a finger at Hultén's nose. 'I'm so much better than you are. You deserved to be fourth.' At the 1934 world championship, Hultén came in fourth. 'Her father arranged it,' Hultén told the Minneapolis Star Tribune. 'She was afraid of me.' Hultén asserted that Henie's father made deals with judges at world championships to ensure his daughter's victories and to thwart Hulten. 'Papa Henie would go to these places and tell the organizers, 'You can have my daughter (for an exhibition); come up to my hotel room and I'll tell you how we can arrange it,' she told the Sporting News in 1994. 'He played poker with them. If he won, he got an appearance fee for Sonja to skate and he got an agreement that the judges would place me no higher than third. I didn't have a chance. I know this is true because one of my best friends was the president of our club in Stockholm, and he told me about it. Back then the judges were always with the clubs.'" 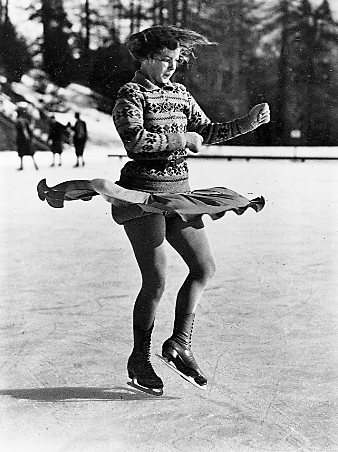 The rivalry didn't stop there. The aforementioned piece goes on to claim, "On a 1935 Olympic training trip to St. Moritz, Hultén told the 'Sporting News' she was detained at the German border for seven hours and searched 'from head to toe,' with no explanation from the guard, whose name was Ulrich Schmidt. Hultén said she later sought out Nazi propaganda minister Joseph Goebbels to complain. Goebbels, a skating fan, had Schmidt brought to him. 'Goebbels made him get down on a knee and apologize to me,' Hultén recalled." (Schmidt) said, 'Well, a young lady came through before her whose name was Sonja Henie. She told me this girl here would be smuggling jewelry, so we stopped her.' At the 1936 Winter Olympics in Germany, medal winners were told to give the Nazi salute to Hitler. Gold medal winner Henie saluted, but bronze winner Hultén refused. 'I told them, 'I'm Swedish; I don't do that,' " she said. "I just stared at him. He was a scary person. He looked at you with kind of a burning look in his eyes.'" 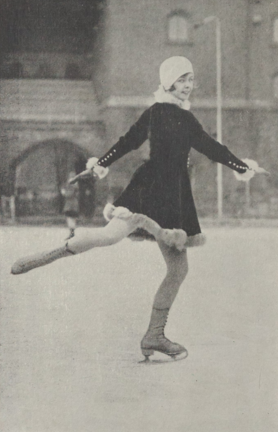 Sticking around to win a final medal at the World Championships in 1937 after Henie's retirement, Vivi-Anne had understandably had enough. She married a Swedish engineer thirteen years her senior named Nils Kristian Tholand and turned professional. She appeared in advertisements for the Chase & Sanborn Coffee Company and found success touring with Ice Capades and Ice Follies, performing in Raymonde du Bief's show "Paris Sur Glace" and skating adagio pairs with two of Henie's former partners, Harrison Thomson and Gene Theslof... who unlike another of Henie's former partners, Jack Dunn, managed to make it out alive. Vivi-Anne almost didn't herself, suffering serious injuries in a 1940 automobile accident in Seattle, Washington. 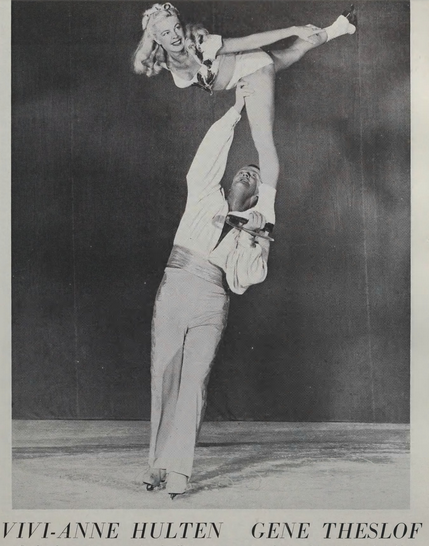 While in recovery, the on-ice pair of Vivi-Anne and Gene Theslof became an off-ice pair. The Swedish ice queen divorced her husband and married Gene in 1942. An attempt at sweet, sweet revenge - in the form of moving in and actually stealing Sonja Henie's show from right under her while she was in Norway - failed miserably (as recalled by Harrison Thomson in the recent Skate Guard feature on him) and any hopes of a comeback were dashed entirely.

Serving a stint as the Ice Capades' tour director in the fifties, the Swedish sensation and her husband settled in America and had a son, also named Gene. The husband and wife pair became a husband and wife coaching team, teaching in North and South Carolina and Tennessee before opening Vivi-Anne Hultén's Fun and Pleasure Skating School at the Aldrich Arena in Minnesota. She even taught skating skills to a hockey team. Barbara Underhill, anyone? 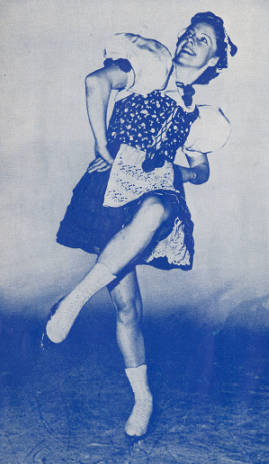 A decade after being widowed  - and in her early eighties, in 1993 - she even rejoined the cast of Ice Capades for special appearances in several cities. The next year, she was slated to commentate skating for Norwegian television during the Lillehammer Olympics. However, her intent to spill the beans on her experiences with Henie - a cultural icon in Norway - led the network to rescind their invitation. She did speak her piece on Henie in numerous newspaper and magazine articles and on that wonderful skating documentary called "Reflections On Ice: A Diary Of Ladies Skating" they put together down in the States in the nineties. After suffering a stroke in 1999, she moved to an assisted living facility in Corona del Mar, California to be closer to her son. She passed away on January 15, 2003 at age ninety one. 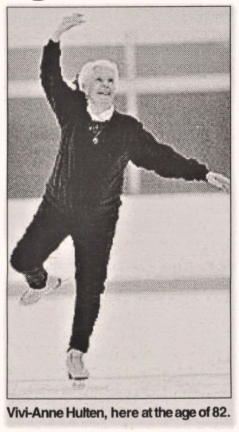 I think the lesson in Vivi-Anne's story is of persistence. Even though she believed that her chances were slim to nil because 'the fix was in', she didn't stop competing. It reminds me a bit of when I performed as a drag queen. For the first five or so years, I competed in a long slew of drag pageants. I finished second - not first, not third, not fifth - in thirteen of them before I finally won my first one. When I skated, I won or medalled in all but one of the competitions I entered so not winning was something new for me. Though definitely frivolous, there was a great life lesson in that whole experience. There were always rumblings about these pageants being fixed and maybe some of them were. I definitely could care less at this point. I do know this though... When I was in those uncomfortable shoes, I was certainly conscious of - or of the belief that - even doing fifteen cartwheels, a backflip and shooting fireworks out of my fake boobs wasn't going to win me those contests. I did it anyway and tried my damndest. Stupid? Hardly. If you are a competitive person and love what you're doing, you do it... and then you do it again. You may in fact never win, but better things will eventually come if you push yourself. They have for me much like they did for Vivi-Anne After all, I'm writing about this marvellously persistent person who dealt with some less than delightful people, tried their hardest to achieve their goals, didn't, moved on and found far more fabulous adventures around the next corner It would seem Vivi-Anne and I may have a great deal in common.

Skate Guard is a blog dedicated to preserving the rich, colourful and fascinating history of figure skating and archives hundreds of compelling features and interviews in a searchable format for readers worldwide. Though there never has been nor will there be a charge for access to these resources, you taking the time to 'like' on the blog's Facebook page at http://www.facebook.com/SkateGuard would be so very much appreciated. Already 'liking'? Consider sharing this feature for others via social media. It would make all the difference in the blog reaching a wider audience. Have a question or comment regarding anything you have read here or have a suggestion for a topic related to figure skating history you would like to see covered? I'd love to hear from you! Learn the many ways you can reach out at http://skateguard1.blogspot.ca/p/contact.html.
Posted by Skate Guard Blog at April 23, 2016
Email ThisBlogThis!Share to TwitterShare to FacebookShare to Pinterest
Newer Post Older Post Home