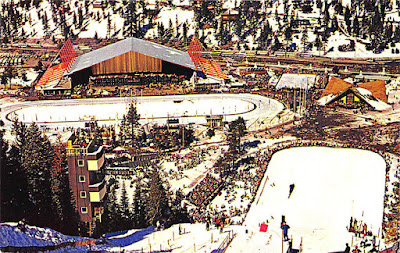 "Pave paradise, put up a parking lot." Joni Mitchell beautifully chirped these lyrics in her much loved hit "Big Yellow Taxi". Ten years prior to that song's release, many of the world's best figure skaters gathered at the newly constructed Blyth Memorial Arena in Squaw Valley, California, hoping their dreams would come true. For a select few they did; for many others they did not. After a roof collapse, the Blyth Memorial Arena was demolished in 1983 and replaced by - you guessed it - a parking lot. Under that concrete and out of the past, the tales of the 1960 Winter Olympics beg to be revisited. This week, we are digging deep and excavating some sensational skating stories from the swinging sixties in Squaw Valley. 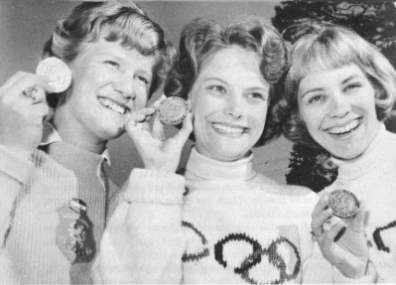 In contrast to the one day of competition for the pairs, the women's event was a four day affair. From February 20 to 22, 1960, twenty six skaters from thirteen countries traced and retraced school figures patiently on the ice under the scrutiny of judges from Austria, Canada, Czechoslovakia, Germany, Great Britain, Italy, Japan, Holland and the United States. Without a break, on February 23 every last one of them returned to compete in the free skating event. It was long before the days of qualification rounds and cuts after the short program: when you started something, you finished it! If anyone knew about sticking it out for the long haul, it was three time Olympic Gold Medallist Sonja Henie who took in the 1960 Games as a spectator. 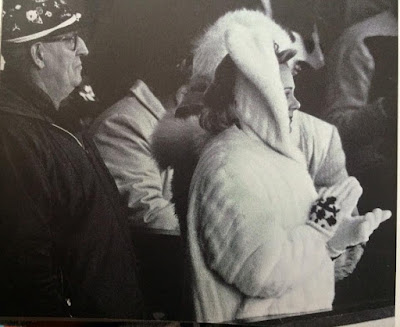 After winning the silver medal at the 1956 Winter Olympics and the previous four World Championships, twenty year old Carol Heiss (much like Barbara Wagner and Bob Paul in the pairs event) was a heavy favourite. When her devoted mother passed away in  October 1956, she had vowed to stick with it for another four years and win a gold medal in her memory. She reflected in her 2012 Manleywoman SkateCast interview, "You're not entitled to anything, you have to earn it and you have to work for it. And the Olympics was no different. You still had to skate for it. And so I was much more nervous than I was in 1954, because each year from then it got harder. First of all, you are older, and you realize that you have an investment in it and you’re giving up so much more for it." Racking up an almost forty six point lead in the school figures on her closest competitor, Holland's Sjoukje Dijkstra, Carol didn't disappoint. In fact, she appeared unstoppable even if she was under tremendous pressure. Further demonstrating her dominance of the field, Carol was 64.9 points ahead of her friend, third place finisher Barbara Roles in the figures. 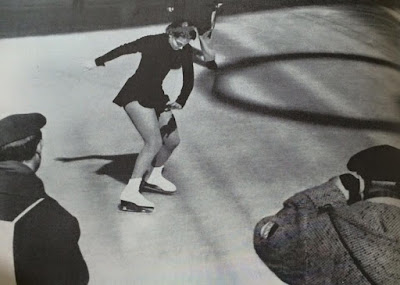 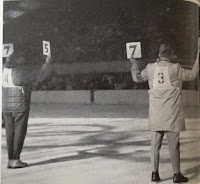 The drama was in full swing on February 23, 1960 when the women took to the ice for their free skating performances. In the earlier groups, seven skaters took tumbles and two collapsed, gasping for air in the high altitudes. One of them was two time British Champion Patricia Pauley, who was recovering from a very bad flu. According to Harald Lechenperg's wonderful book "Olympic Games 1960 Squaw Valley-Rome", Pauley (in her weakened condition) "only just managed to get through the program, struggling against exhaustion. When her four-minute free-skating performance finished, Miss Pauley collapsed on the ice, totally spent. Yet despite her handicap she manages to gain 15th place out of 26 entrants - an achievement worthy of high praise."


Too far back in points to even challenge Dijkstra for silver let alone Heiss for gold, eighteen year old Barbara Roles delivered an exceptional free skate in Squaw Valley. Her only major mistake was a miss on a flying sit spin. Czechoslovakia's Jana Mrázková was considered by more than source to have been undermarked in the free skating. Considering that she was considerably behind  Laurence Owen and even Holland's Joan Haanappel in the school figures, she was actually lucky to claim fourth to Roles' third overall. 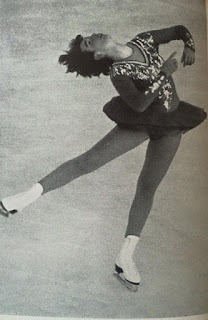 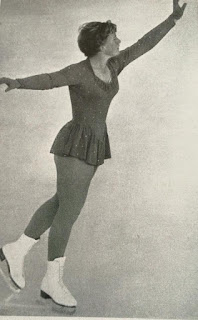 Regine Heitzer of Austria and Sjoukje Dijkstra of Holland

Like Roles, Dijkstra performed exceptionally. Lechenperg's book remarks "when Carol's keenest rival, Miss Dijkstra, whirls over the ice the Americans cannot help but watch her anxiously. The Dutch girl starts her program with an unusually high axel followed by a series of beautiful spins and jumps. The middle section of her free-skating programme is an elegant combination of steps which afford her some respite before her big finale, in which she demonstrates strikingly the strength at her command. She ends with an exhibition of verve that brings the audience to its feet in thunderous ovation. The public is sufficiently unbiased to acknowledge that Miss Dijkstra is a front-rank performer, regardless of whether Miss Heiss is better or not." 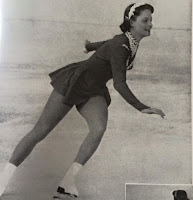 Making good on the Olympic Oath that she delivered only days before, Heiss was the class of the field in Squaw Valley... although she wasn't flawless. Lechenperg's book notes that "there are two tiny uncertainties in her jumps." The "United States 1960 Olympic Book" (the quadrennial report of the U.S. Olympic Committee) edited by Arthur G. Lentz recorded her performance thusly: "Her magnificent exhibition in the free skating stirred the capacity crowd to tears and cheers. Clad in crimson costume, embellished with spangles and a tiara in her blonde hair, she bedazzled the judges and the spectators with her sheer artistry. It was an enthralling four minutes for the crowd as Carol, to the accompaniment of a medley score from Tchaikovsky, Delibes and Rossini, glided over the ice, spinning and leaping with feathery lightness. When she executed the double axel and double salchow, the crowd stood and cheered. When it was all over there were cries of 'bravo', 'six, six, six' - the perfect score. She didn't get six but she came mighty close. Even Japanese judge, Shotaro Kobayashi, who had been scoring very conservatively, awarded her 5.5 points... The other scores all ranged from 5.7 to 5.9." 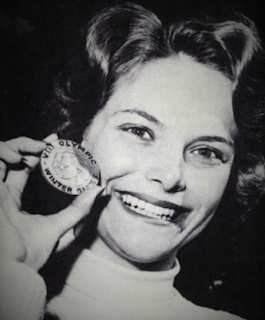 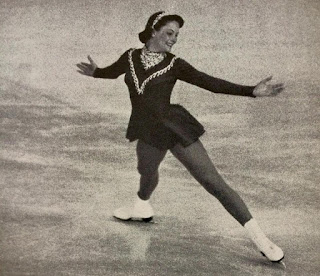 Ultimately, Carol Heiss won Olympic gold in 1960, fulfilling that promise to her mother from four years earlier. Dijkstra was second; Roles third. There's a certain sadness when you look down the list of competitors and see Laurence Owen's name in sixth place. She tumbled on a double toe-loop in Squaw Valley but got up smiling... and then perished on the Sabena Crash the next year enroute to the World Championships. But on February 23, 1960, she wasn't that skater standing outside an airplane in an eerie and prophetic image. That night, Laurence Owen was the roommate of Carol Heiss in the Athlete's Village. Together, they celebrated their success in a sport which is often far too cruel for its own good.

Stay tuned for the next Skate Guard blog... where everything will be coming up David Jenkins as we revisit the men's competition from the 1960 Squaw Valley Olympics in the final installment in this three part series!

Skate Guard is a blog dedicated to preserving the rich, colourful and fascinating history of figure skating and archives hundreds of compelling features and interviews in a searchable format for readers worldwide. Though there never has been nor will there be a charge for access to these resources, you taking the time to 'like' on the blog's Facebook page at http://www.facebook.com/SkateGuard would be so very much appreciated. Already 'liking'? Consider sharing this feature for others via social media. It would make all the difference in the blog reaching a wider audience. Have a question or comment regarding anything you have read here or have a suggestion for a topic related figure skating history you would like to see covered? I'd love to hear from you! Learn the many ways you can reach out at http://skateguard1.blogspot.ca/p/contact.html.
Posted by Skate Guard Blog at May 19, 2016
Email ThisBlogThis!Share to TwitterShare to FacebookShare to Pinterest
Newer Post Older Post Home