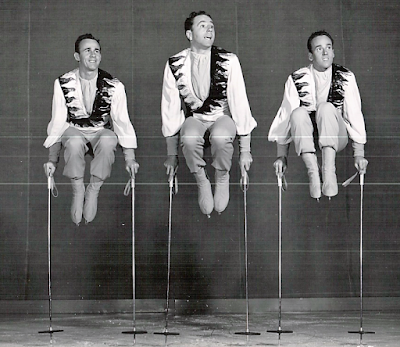 From 1916 to 1918, three young men were born in Manchester, New Hampshire who would go on to greatness. Leonard 'Len' and Kenneth Mullen were born in 1916 and 1918 - just two of the seven mouths that James and Sarah (Keough) Mullen had to worry about feeding on the modest wages of a loom fixer at a cotton mill. Edmond 'Eddie' Raiche, the youngest son of Amedee and Angeline Raiche, was born in 1917. His background was equally modest - selling wood and coal was the family business. 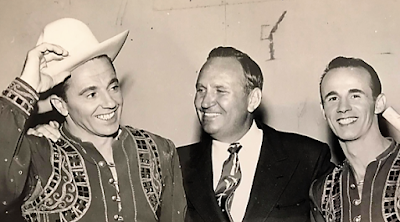 It was Len and Kenneth Mullen's older brother Fred that taught them how to skate. Fred was a wiz at acrobatics, tap dancing and ice skating and would take Len and Kenneth Mullen, along with their younger brother Russell, to Dorr's Pond. In between skates, the Mullen boys learned how to do backflips in the snow next to the pond. They also took lessons with George Nissen, the inventor of the trampoline, in an effort to perfect the stunt. 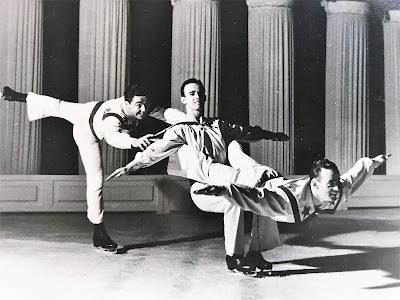 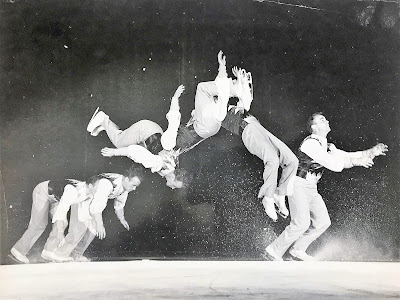 In 1942, Eddie gave up his job at a paint store, Len stopped working as a surveyor and Kenneth quit being a photo engraver. They joined the cast of the brand new Ice Capades tour, going by the name The Hub Trio. Len and Kenneth were billed as 'the Mullen twins', even though they weren't twins at all. They were instant hits with audiences, including the backflip in their acrobatic act to "Anchors Aweigh" and "We Join The Navy", sporting sailor suits. As Adele Inge also performed the backflip on skates in 1942 or 1943, it is extremely difficult to say who was the first, but The Hub Trio were definitely one of the first acts to include the crowd-pleasing trick in their programs. Kenneth Mullen's grandson Jared Hergenrader asserted that her grandmother knew Skippy Baxter, and claimed that Kenneth performed the backflip before him.


In 1944, Len and Kenneth Mullen joined the navy. The Hub Trio returned to the Ice Capades and Ice Cycles after the War, appearing for a time as the Hub Duo minus Eddie. They appeared on The Art Linkletter Show and gave a performance before the Royal Court in England! 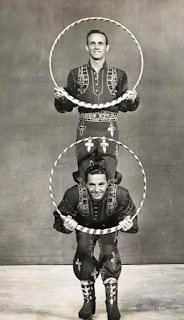 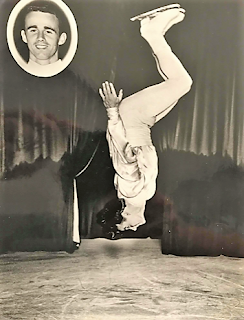 Two of the three members of the Hub Trio married skaters from the Ice Capades cast. Kenneth's wife Carmel and Eddie's wife Voline were both Ice Capets. Len's wife Eleanore was a singer who performed with the Malena Sisters Trio. 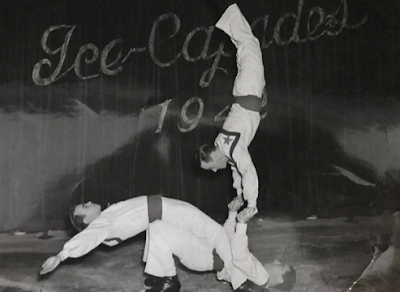 After they hung up their skates, Len worked as a surveyor for U.S. Steel in Pittsburgh, Kenneth acted as the sales and catering manager at the Hacienda Inn in Fresno and Eddie sold ice cream before opening a drive-in restaurant in Fresno. Len passed away on February 8, 1981, Kenneth passed away on September 22, 1985 and Eddie passed away on June 22, 2010.  Though history may not have given them much credit, these back-flipping acrobats from New Hampshire were pioneers of one of figure skating's most popular tricks!

Skate Guard is a blog dedicated to preserving the rich, colourful and fascinating history of figure skating and archives hundreds of compelling features and interviews in a searchable format for readers worldwide. Though there never has been nor will there be a charge for access to these resources, you taking the time to 'like' on the blog's Facebook page at http://www.facebook.com/SkateGuard would be so very much appreciated. Already 'liking'? Consider sharing this feature for others via social media. It would make all the difference in the blog reaching a wider audience. Have a question or comment regarding anything you have read here or have a suggestion for a topic related to figure skating history you would like to see covered? I'd love to hear from you! Learn the many ways you can reach out at http://skateguard1.blogspot.ca/p/contact.html.
Posted by Skate Guard Blog at August 27, 2018
Email ThisBlogThis!Share to TwitterShare to FacebookShare to Pinterest
Newer Post Older Post Home