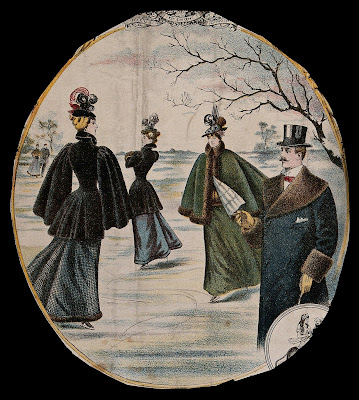 Without a doubt, Great Britain played one of the most important roles in the early development of figure skating. From The Skating Club to the earliest textbooks on the technique of skating, the sport would not have evolved in the way it did had it not been for that stiff British upper lip. Today, we'll meet three unique skating pioneers whose stories really haven't been explored to any degree of depth previously and learn about their roles in figure skating history! 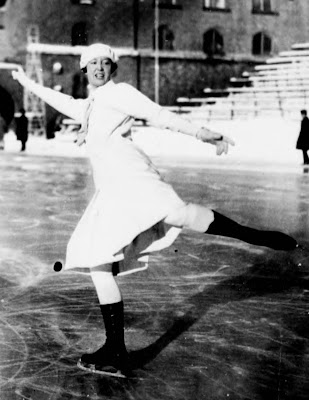 Born January 15, 1903 in Manchester, England, Gertrude Kathleen Shaw was the daughter of hydraulic engineer Percy Shaw and Gertrude Anne Hind. Raised in Barton-Upon-Irwell, Kathleen and her younger Constance grew up comfortably, attending school and being well fed by the family's cook, Florence. A successor of Madge Syers, Kathleen trained at the Manchester Skating Club and in Switzerland and regularly competed against men at the British Championships before becoming Great Britain's first women's champion when a separate women's event was added in 1927. 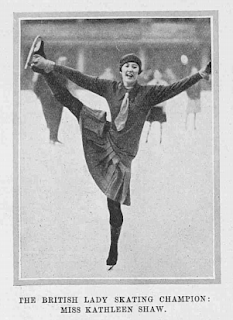 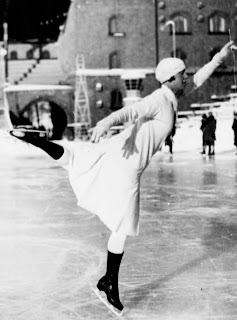 Though an NSA Gold Medallist who represented her country at both the 1924 and 1928 Olympics, Kathleen's biggest claim to fame was a bronze medal at the 1926 World Championships in Stockholm, behind Herma Szabo and Sonja Henie. T.D. Richardson claimed that her spread eagle was the best of the women competing in her era and many accounts note her grace as a skater.
However, Kathleen faced considerable competition from Henie, Szabo, Maribel Vinson, Constance Wilson and Cecil Smith. 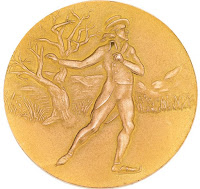 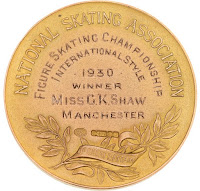 Though she never managed to translate her success in England to a gold medal internationally, Kathleen did enjoy a brief professional career in the late thirties. She passed away on the island of Ynys Môn off the Welsh coast on July 19, 1983 at the age of eighty.

The son of Kathleen (Ellis) and James Bowhill, Ian Home Bowhill was born May 27, 1903 in Edinburgh, Scotland. He was one of the first Scottish figure skaters to achieve success in Great Britain once the Continental Style became de rigueur. A stockbroker by day, Salchow lover by night, Bowhill trained at the Edinburgh Ice Rink and won the Fosterson Waltzing Cup with V. Jeffrey in 1924. He placed a disastrous fourteenth out of sixteen skaters in the men's event at the 1928 Winter Olympic Games in Chamonix, France and dead last in his final international outing, the 1929 World Championships in London.

After marrying Elizabeth Mabel Robertson Durham in 1930, Ian returned to claim the British men's title in 1932. Two years later, he demonstrated a novel creation - the Bowhill (or reverse Schäfer) jump - at the British Championships. Megan Taylor described it thusly: "It is begun from a deep outside back edge, and the skater makes a complete turn in a rocker-wise direction to land on the outside back edge of the opposite foot."

After retiring from competitive figure skating, Ian found more success on the putting green than he ever did in the ice rink. Prior to World War II, he was active as an international figure skating judge. He passed away in the small town of Banchory, Scotland in 1975.

Gwendolyn Lycett had both the fortune and misfortune of training alongside both Madge Syers and Dorothy Greenhough Smith at Prince's Skating Club at Knightsbridge in the early twentieth century. Like her training mates, Gwendolyn wintered in Switzerland, where she learned the finer points of the Continental Style. In Davos in 1907, a women's figure skating competition was held in conjunction with the European Speed Skating Championships. Gwendolyn narrowly lost the title at that event to Dorothy Greenhough Smith... but she defeated her in the free skate. She again lost to Greenhough Smith in the contest for the Duchess Of Bedford's Cup at Prince's that season. She was victorious in Switzerland in 1909, competing in a Continental Style championship for the Woodward Cup. 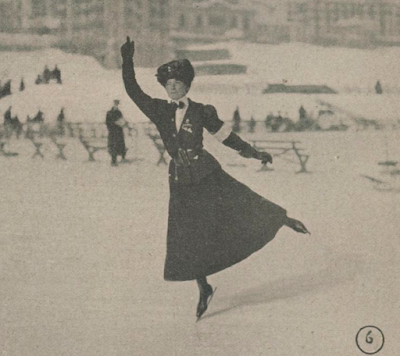 Unfortunately, at both the 1907 World Championships in Vienna and 1908 Summer Olympic Games in London, Gwendolyn placed dead last. At her second trip to the World Championships in 1912, she tied in points with Phyllis (Squire) Johnson but finished just off the podium in fourth. It was certainly a credit to her ability that John Keiller Greig - whom she competed against at the Engadine Challenge Cup in Celerina - had her first in figures. 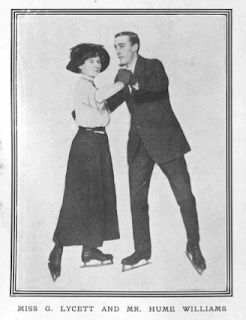 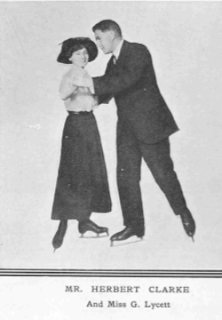 Another credit to Gwendolyn's ability was the fact that she defeated a number of men in head-to-head competition. In those days, the fight for the Swedish Challenge Cup - the British Championship - and other competitions such as the Prince's Skating Club's competition were open to both men and women. Among the men she defeated were Martin Gordan, Herbert J. Clarke and Albert March. However, "Lady's Realm: An Illustrated Monthly Magazine" noted, "Miss Lycett, so well known at Prince's, is very modest of her reputation as a really first-class skater." Although little is known of Gwendolyn's life outside of figure skating, we do know that she didn't just excel on frozen water.  From 1908 to 1910, she amassed an impressive number of victories in sculling and punting at the Cookham, Bourne End, Henley Town and Sunbury Regattas.

Born in January of 1860 in the London borough of Lambeth, Winter Randell Pidgeon was the son of Daniel and Lydia Pidgeon. Following in the footsteps of his father who was a civil engineer, Pidgeon studied engineering and married Mary Constance Heap of South Kensington in January 19, 1888 at the age of twenty eight. Settling in South Paddington, Pidgeon lived in the lap of Victorian luxury, with a cook, parlourmaid, nurse and housemaid catering to his every whim. 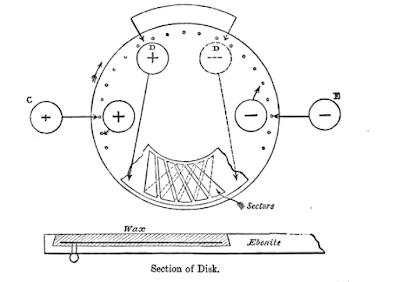 By day, Mr. Pidgeon worked as the chairman of a brush factory and by night, he was an avid amateur scientist who belonged to the Physical Society. In the early 1890's, when he was in his early thirties, he invented the Pidgeon Machine, a unique 'influence machine' or electrostatic generator. Just prior to The Great War, Mr. Pidgeon was the chairman of the British Vacuum Cleaner Company, Ltd. The newfangled appliance he peddled transformed the lives of domestic servants in Great Britain. 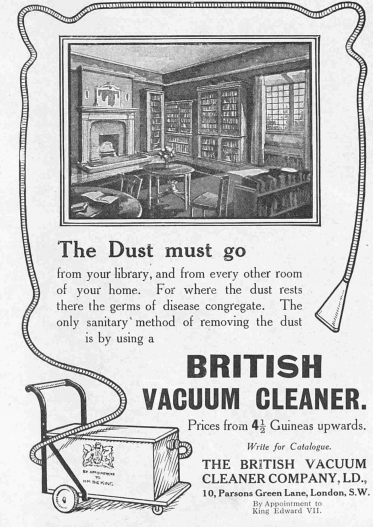 A Freemason, Mr. Pidgeon spent much of the rest of his free time on the ice skating figures in the stiff English Style at the Wimbledon Skating Club. He was one of the most respected skaters at the club and soon became regarded as somewhat of an expert in good form, carriage and figure technique. In 1892, Mr. Pidgeon collaborated with Montagu Sneade Monier-Williams and Arthur Dryden to write an updated edition of "Figure-Skating Simple And Combined", where he extolled his views on what he believed to be the essence of the 'proper' way one would skate. He wrote: "Anyone who hopes to skate with the ease and finish characteristic of the best men, must sedulously avoid all acrobatic feats and tricky figures, and must work patiently through those only which can be properly skated in combination... Quietness of demeanour and grace of carriage should go hand in hand with concentration of energy and certainty of purpose." Although the popularity of the Continental Style of skating ultimately won out over Mr. Pidgeon's vision of what figure skating should be, his timely writings on the sport certainly helped contribute to the evolution of the sport and undoubtedly brought many Victorians to the ice who hadn't skated previously. He passed away on May 24, 1926 in Falmouth, Cornwall, England at the age of sixty six, leaving his widow a small fortune.

Skate Guard is a blog dedicated to preserving the rich, colourful and fascinating history of figure skating and archives hundreds of compelling features and interviews in a searchable format for readers worldwide. Though there never has been nor will there be a charge for access to these resources, you taking the time to 'like' on the blog's Facebook page at http://www.facebook.com/SkateGuard would be so very much appreciated. Already 'liking'? Consider sharing this feature for others via social media. It would make all the difference in the blog reaching a wider audience. Have a question or comment regarding anything you have read here or have a suggestion for a topic related to figure skating history you would like to see covered? I'd love to hear from you! Learn the many ways you can reach out at http://skateguard1.blogspot.ca/p/contact.html.
Posted by Skate Guard Blog at May 14, 2019
Email ThisBlogThis!Share to TwitterShare to FacebookShare to Pinterest
Newer Post Older Post Home