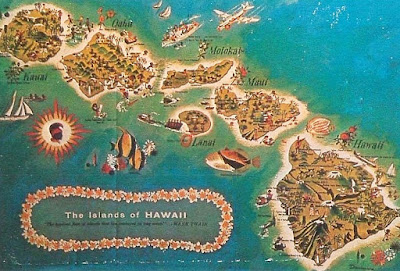 Before commercial flights changed the way people travelled, Hawaii was one of the most remote destinations on earth. It took over nine hours to reach by propeller airplane from the West Coast of the United States or over five days by ship. Cut off from the outside world to some degree, one would think that Hawaiians wouldn't have had much exposure to winter sports in the days before television. As we'll see in today's blog, the skating history of The Aloha State goes back further than one might think.


Lake Waiau, a ten foot deep lake of about an acre in size at thirteen thousand feet on Mauna Kea, was first discovered to have ice in 1906. The "Ka Nupepa Kuokoa" noted that when Eben Low of Waimea visited the lake, he said it was "perfect for having fun ice skating". By the thirties, locals who weren't scared of a little altitude made the trip to do just that. L.W. Bryan, Associate Forester with the Paradise of the Pacific, wrote in 1939, "During the winter months the lake is usually covered with ice and frequently with snow. Even during the summer months a thin film of ice usually forms during the night but disappears when the sun comes up. In the winter the ice is often thick enough to hold the weight of several people and it is possible to enjoy ice skating thereon." Bryan and his compatriots borrowed skates from the Humuula Sheep Station in nearby Kalaieha. Soon magazines began (often inaccurately) boasting of the "tropical ice skating rink" at Lake Waiau. According to legends, the Lake was a bottomless portal to the spirit world and its water was supposed to be healing, as it was associated with the Hawaiian god Kane. 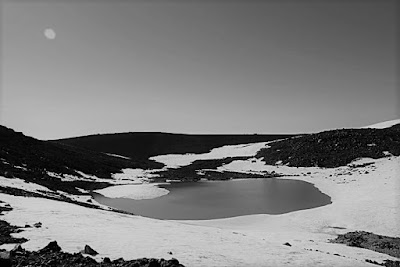 In 1926, Alice Cooper Bailey, a California born writer who grew up in Hawaii and graduated from Oahu College in Honolulu penned "The Skating Gander", a children's book about a feathered friend's skating adventures. 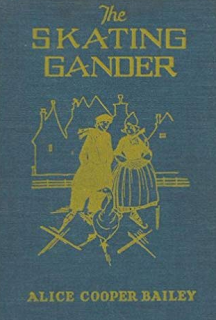 In 1938, E.K. Fernandez - known as The Barnum Of The Pacific - featured the first travelling Hawaiian ice show in his carnival. The 'Ice Frolics' was performed on tank ice under a forty by sixty foot canvas tent at the Maui County Fair. British pairs skaters Rona and Cliff Thaell recalled skating in Honolulu "when the temperature was well over the 100 degree mark and regaled themselves by eating pineapple frozen into their portable artificial rink for decorative purposes."

The October 26, 1938 issue of "The Star Of Hawaii" reported, "E.K. Fernandez, Hawaii's popular showman, has brought the best show to Hilo this year that has ever been seen here and it is attracting big crowds to the Davies lot where the show is being held. It is being sponsored by the Elks lodge of Hilo. The Ice Frolics is the leading attraction and is a marvellous show, something the people of Hawaii have never seen before. Imagine skating on real ice in a tropical country like this. The ice is produced artificially by a unique system of freezing. The rink is large enough for the entire troupe to perform at one time. The ice ballet of pretty girls is well worth the price of admission alone. The troupe contains some of the best fancy skaters in the world, many of them internationally famous. Everybody should see this wonderful show while it is here as it will be a long time before such another treat will be offered the people of the Big Island."

E.K. Fernandez continued his shows until at least 1950, featuring skaters such as Dot McCusker and April and Roy Schramm. He faced competition when Mark Traversino brought a small ice unit to Honolulu in 1949. Traversino's production, "Ice Classics", later played in Guam and Manila but didn't draw huge crowds. 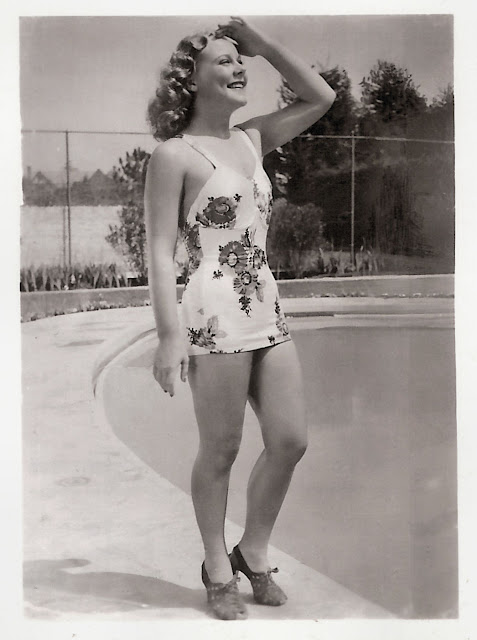 While vacationing at the Royal Hawaiian Tour hotel on Waikiki Beach in Honolulu in 1940, Sonja Henie went to go see Hilo Hattie - the woman who inspired Sonja's own world famous Hula dance. While Henie was Hula-ing it up in America later on during the War, her husband Dan Topping was stationed as a marine Captain in Honolulu.

Sonja Henie and Dan Topping weren't the only ones with Hawaiian connection during the second World War. Six time U.S. Champion (in singles and pairs) Joan Tozzer, whose mother lived in Hawaii, had moved there in 1939. During the War, she survived the Pearl Harbor attack and joined the Army's Woman's Air Raid Defense and the USO, aiding in the war effort by working in a top-secret, underground mapping program. Ramona Allen McIntyre, a long-time World judge and U.S. Junior Champion in 1940, also lived there for many years.

The novelty of having an ice rink in Hawaii wasn't lost on entrepreneurs. Hawaiian newspaper archives reveal that a foundation was laid for ice rink in Waihiawa in December of 1939. American tabloids claimed that the following year Hawaii had two rinks but Sonja Henie refused to skate on either one of them while vacationing there. In 1951, Patricia Piilani Ono Nakama recalled that when her father was twenty years old, he and her grandfather built a skating rink, investing in two hundred pairs of metal skates. Whether this was an ice rink or a roller rink is unknown. In 1955, a reader from Seattle wrote to "Skating" magazine to share, "Land on Kapiolani Boulevard next to a drive-in theater has been leased as the site of Honolulu's first ice skating rink, to be called John P. Betro's Glacerium. Plans for the rink were announced in February by John P. Betro, who for three years owned and operated Betro's Ice Palais in Sydney, Australia. His plans call for a 200 by 300 foot auditorium-style building with a skating rink 90 by 200 feet. There will be a seating capacity of 8,000 to 10,000 spectators." One of the innovations at Betro's Sydney rink was an on-site hairdresser where could walk right off the ice and have their hair cut and styled. Whether Betro was successful in getting his 'Glacerium' in Hawaii off the ground or not is unknown. 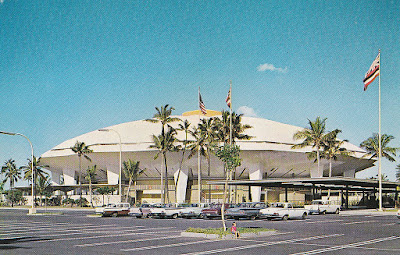 Both the Ice Capades and Ice Follies came to Honolulu in the sixties, performing shows at the newly constructed, saucer shaped Honolulu International Center. As the venue wasn't equipped with its own ice-making equipment, the revues had to bring their own. In 1977, the 'This is Hawaii' Ice Skating Show was performed on 'iceless ice' at the California Midwinter Fair and at the Americana Hotel in San Juan, Puerto Rico. Among the stars was a Hawaiian born skater named Pat Waanoi.


The Ice Palace opened in Honolulu on September 28, 1982. Two years later, the Hawaii Figure Skating Club was formed. Since the rink opened its doors, it has been Hawaii's only permanent ice rink. The Hawaii Figure Skating Club's annual Skate Aloha competition started in 1995 and ten years later in 2005, Honolulu played host to the U.S. Collegiate Figure Skating Championships. It was the first time a national level championship was held in Hawaii. Whether or not a future U.S. Champion come from The Aloha State remains to be seen. One thing is for sure though... Hawaii's skating history is quite unique.

Skate Guard is a blog dedicated to preserving the rich, colourful and fascinating history of figure skating and archives hundreds of compelling features and interviews in a searchable format for readers worldwide. Though there never has been nor will there be a charge for access to these resources, you taking the time to 'like' on the blog's Facebook page at http://www.facebook.com/SkateGuard would be so very much appreciated. Already 'liking'? Consider sharing this feature for others via social media. It would make all the difference in the blog reaching a wider audience. Have a question or comment regarding anything you have read here or have a suggestion for a topic related to figure skating history you would like to see covered? I'd love to hear from you! Learn the many ways you can reach out at http://skateguard1.blogspot.ca/p/contact.html.
Posted by Skate Guard Blog at December 12, 2019
Email ThisBlogThis!Share to TwitterShare to FacebookShare to Pinterest
Newer Post Older Post Home