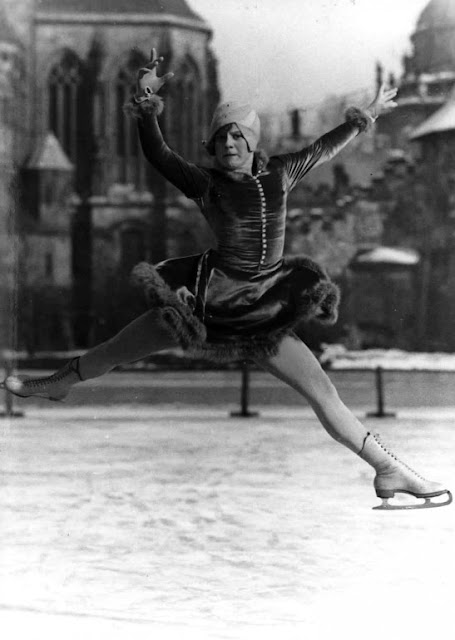 In early 1929, Erich Maria Remarque's book "Im Westen nichts Neues" ("All Quiet On The Western Front") was published in book form, the amiable characters Popeye and Tintin made their first appearances, George Gershwin's "An American In Paris" was first recorded for posterity and the world's best figure skaters convened in two European cities to compete in the 1929 World Figure Skating Championships. 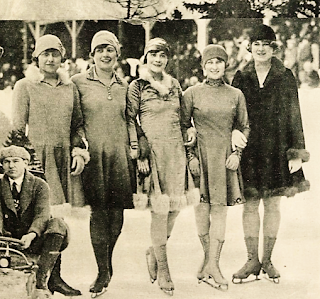 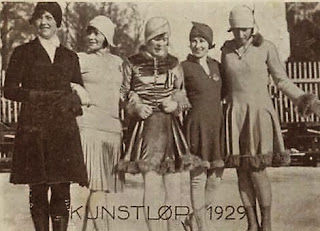 
The women's and pairs events were held on February 2 and 3, 1929 at the Városligeti Műjégpálya in Budapest, Hungary. The men competed on March 4 and 5, 1929 at the Westminster Ice Club in Millbank, London, England. The London event was allotted to London as a precursor to the National Skating Association's Golden Jubilee gala, celebrating the organization's fifty year anniversary. In Budapest, Olympic Gold Medallists Ludovika and Walter Jakobsson made history as the first husband and wife to judge at the same World Championships. She judged the pairs event; he the women. The men's event in London drew an extremely large crowd, including British Prime Minister Stanley Baldwin and His Royal Highness Prince Edward, Duke of Cornwall, who told Ulrich Salchow that he had been unable to imagine "such things could be performed on skates". The women's and pairs events also drew large audiences, on account of the fact they were held in conjunction with the Budapesti Korcsolyázó Egylet's sixtieth anniversary. Let's take a look back at how everything played out in the final World Championships of the roaring twenties! 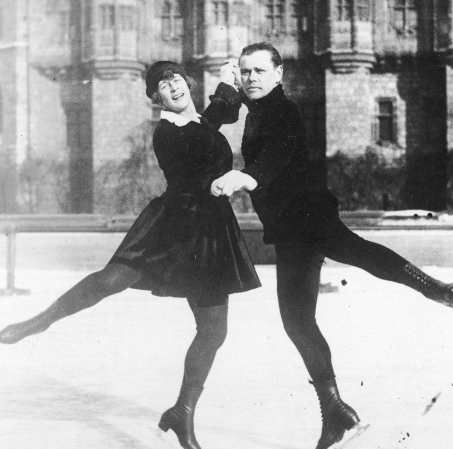 Seven teams representing four nations vied for the 1929 World pairs title in Budapest. After settling for silver or bronze at the last four World Championships, Austrians Lilly Scholz and Otto Kaiser finally managed to snatch the gold in the absence of France's Andrée (Joly) and Pierre Brunet, who were busy raising their infant son Jean-Pierre. They did so with a strong performance that earned first place ordinals from four of the five judges. 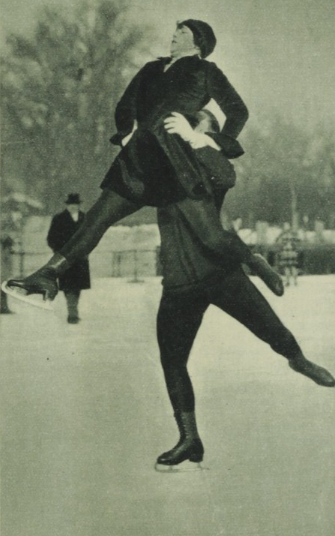 Only the Norwegian judge placed silver medallists Melitta Brunner and Ludwig Wrede ahead of their compatriots. Brunner and Wrede's medal win was particularly impressive as both skaters would go on to win medals in their respective singles disciplines. The bronze went to Hungarians Olga Orgonista and Sándor Szalay, to the delight of the large Hungarian crowd. 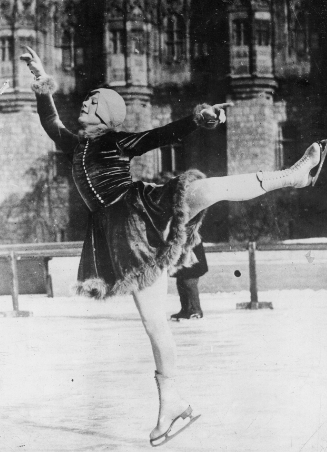 According to Ulrich Salchow, the Viennese contingent had talked up Fritzi Burger's chances of dethroning Sonja Henie ad nauseum. One Austrian reporter even went so far as to suggest the Norwegian ice queen might not show up for fear of losing her title. Not only did twenty one year old Sonja Henie show up in Budapest, she won the school figures with first place ordinals from four of five judges. British judge Herbert J. Clarke daringly placing Fritzi Burger ahead of her in that phase of the event. In reality, a significant lead in the first phase of the competition made the title a lock for the Norwegian before she even stepped on the ice to perform her free skating routine. 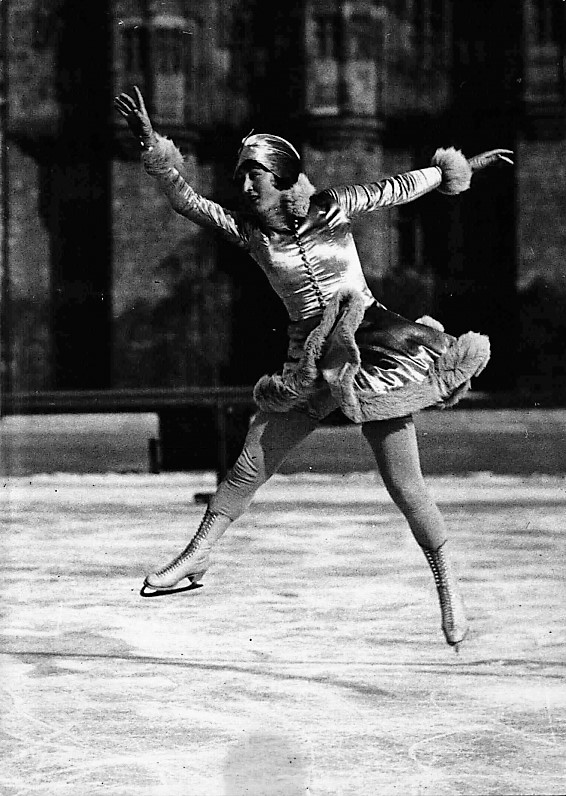 Three judges gave Henie first place ordinals for her free skating effort, with Finnish judge Walter Jakobsson preferring Melitta Brunner's free skating performance and Austrian judge Eduard Engelmann Jr. giving the nod to Burger. When the results were tallied, Sonja won the overall event with overall firsts from every judge and Burger edged Brunner by only one ordinal placing for the silver. 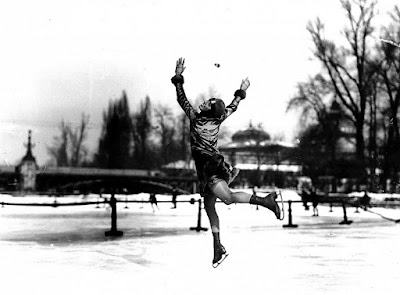 Austrians Ilse Hornung and Grete Kubitschek placed fourth and fifth and merry murderess Yvonne de Ligne placed last in her debut at the World Championships. According to the Hungarian newspaper "Sport Híradó" the weather during the women's competition was "sparklingly sunny" and above zero, meaning the ice would have been soupy at best.


Sticking it to Fritzi Burger and the Austrians was a sentimental victory for Henie, but in her book "Wings On My Feet" she recalled, "Very young, healthy, and finely trained as I was during that season of my third world championship, I came to realize that performances can be tiring because of the pace of living a champion is forced to keep up day and night despite the greatest desire to live sensibly. Everywhere I went, parties were arranged for me, all with such kind intent and flattering purpose that I could hardly refuse to attend. People wanted me to have a good time... So did I. But I wanted even more to feel fit and fresh for my performances. My hosts and hostesses didn't realize, I'm sure, that the sequence of skating engagements went on continuously for me from October to April, and that if I had all the fun possible in each city, by Christmas I wouldn't have the stamina for a figure eight." 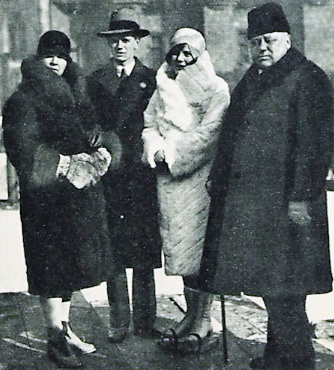 Belgium's Robert van Zeebroeck, the surprise bronze medallist at the 1928 Winter Olympic Games, did not arrive to compete despite being registered. With Willy Böckl also out of the picture, all eyes in London were on Karl Schäfer, the newly crowned European Champion and Gillis Grafström, the three time Olympic Gold Medallist and perennial favourite. Thirty five year old Grafström and nineteen year old Schäfer established a wide lead ahead of the other five men in the school figures, with Austrian judge Eduard Engelmann, Jr. standing alone in placing his student - yes, student - first ahead of the famous Swede.

International open competitions for women and pairs were held in London in conjunction with the World Championships for men. The women's senior open competition was won by Fritzi Burger, with Melitta Brunner second and Kathleen Shaw third. Brunner also won the pairs title with partner Ludwig Wrede. 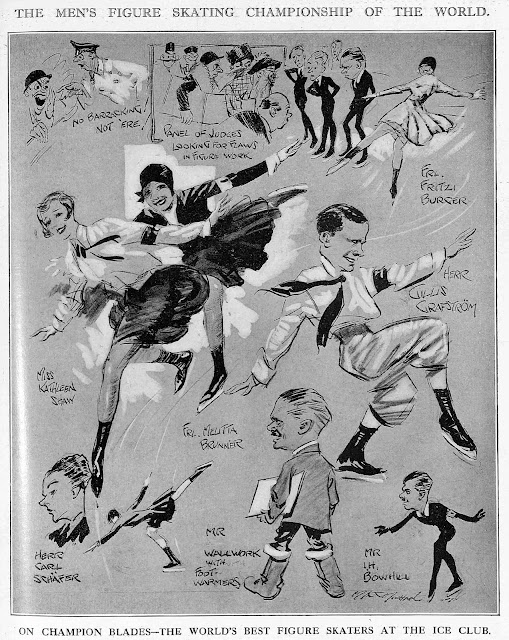 For an account of how the men skated in London, we can turn to the writings of Ulrich Salchow, who was then the ISU President and actually served as the Swedish judge on the panel in London: "[John] Page did not include a single pirouette in his program, but skated well. Karl Schäfer, [Ludwig] Wrede and [Hugo] Distler, all from Vienna, were capable competitors, but they all went quickly, without expression, and [were] sloppy... Ludwig Wrede skated with momentum and performed many difficult jumps and pirouettes, but did not captivate the audience. Despite his skill, his program was dull and dry. The Finn [Marcus] Nikkanen I liked. He possesses softness, glide and good entertainment... Schäfer started as No. 2. He skated well. Admittedly, during the first minute a little nervous, but then absolutely superb, with regard to a lot of jumps and pirouettes. In between, he swept the ice with trivial dance steps, came out and took off for the next 'nonsense' - Paulsen jump, three or four other jumps. He went full speed. He was in a hurry to fit all of his figures in the fore written five minutes. He literally chased his music. [Gillis] Grafström gave flashes of great skill. His [Axel] Paulsen was failed but his double pirouette very good. His combined figures were also very beautiful... His great turnaround in a spiral, for example, snatched the spectators attention with its verve. [He had an] artistic touch."

Based on Ulrich Salchow's commentary we can correctly surmise how he voted, but Karl Schäfer actually won the free skate in London in a three-two split. However, Grafström's strong lead in the figures allowed him to hang on to narrowly defeat the teenage Austrian overall by a mere 6.65 points and four ordinal placings. Though not a single judge had him in the top three in the school figures, Austria's Ludwig Wrede moved up to claim the bronze when other skaters faltered in the free skate. Only one ordinal separated placings fourth through sixth, filled by John Ferguson Page, Dr. Hugo Distler and Markus Nikkanen. Ian Home Bowhill of Scotland, who would go on to be a distinguished international judge in the thirties, placed last. After the event, Ulrich Salchow wrote, "Yes, we shall be pleased with Grafström's victory, for it was well deserved if not so eminently superior. To win a World Cup is no small matter, whether in the old days or now... We Swedes have special reasons to be proud of Grafström's achievement, for we are not having a youthful crowd of skaters [ready to] step in and defend the colours. After Grafström, it will probably not be Swedish for a long time, Therefore let us rejoice as long as he manages to achieve victory at the Swedish name." Though one has to admire Salchow's patriotism, his concurrent roles as ISU President, judge and journalist certainly wreak of conflict of interest in hindsight. The ten time World Champion was right though... after Grafström's win in 1929, no Swedish man has ever reclaimed the World title in men's figure skating.

Skate Guard is a blog dedicated to preserving the rich, colourful and fascinating history of figure skating and archives hundreds of compelling features and interviews in a searchable format for readers worldwide. Though there never has been nor will there be a charge for access to these resources, you taking the time to 'like' on the blog's Facebook page at http://www.facebook.com/SkateGuard would be so very much appreciated. Already 'liking'? Consider sharing this feature for others via social media. It would make all the difference in the blog reaching a wider audience. Have a question or comment regarding anything you have read here or have a suggestion for a topic related to figure skating history you would like to see covered? I'd love to hear from you! Learn the many ways you can reach out at http://skateguard1.blogspot.ca/p/contact.html.
Posted by Skate Guard Blog at April 16, 2020
Email ThisBlogThis!Share to TwitterShare to FacebookShare to Pinterest
Newer Post Older Post Home