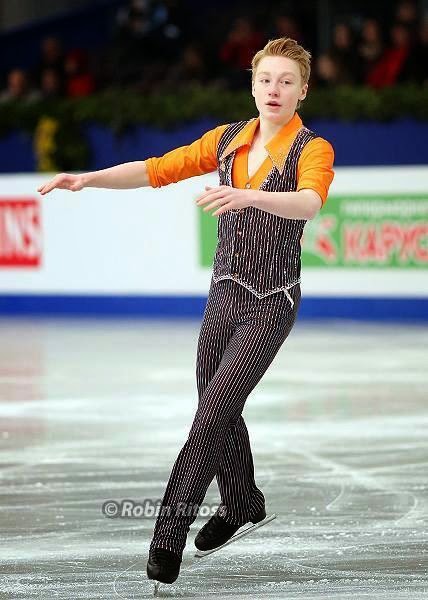 If you enjoyed the recent interview with Camilla Gjersem, you might know that Norway has been very kind to figure skating. It's given us three time Olympic Gold Medallist Sonja Henie, Olympic Silver Medallist Andreas Krogh, Olympic Bronze Medallist Martin Stixrud and has played host to both the 1952 and 1994 Winter Olympics and a total four World Championships if you account for the fact that in the early days of skating, men's and ladies skaters competed for World titles at separate events altogether. Although not the hotbed of skating it once was during the pre-Henie and Henie eras, Norway continues to produce some fantastic talent and among those is their current men's champion Sondre Oddvoll Bøe. Hailing from Vollen (which lies next to the western coast of the Oslo Fjord), sixteen year old Bøe is a young skater with quite a bright future ahead of him. He's already competed at two World Junior Championships and the European Championships and is busy gearing up for what he hopes will be a breakout season for him. Before heading off to the Junior Grand Prix event in Dresden, Sondre took the time to talk about his skating career to date, programs and goals for this season, must visit places to visit in Norway and much more in this first rate interview:

Q: You're the current Norwegian senior men's champion and have won both the novice and junior men's titles at The Nordics. You've also competed internationally on the Junior Grand Prix circuit and at events like the World Junior Championships, Triglav Trophy, NRW Trophy and European Youth Olympics. Looking back on all of the things you have accomplished so far, what are your proudest moments or most special memories as a skater?

A: One of the two proudest moments I have had so far as a skater is the competition I did in Warsaw earlier this year. It was the first time I landed a triple flip in competition, which made my training and the rest of the season better because after this I also did triple lutz. I skated in Warsaw two times before this competition and I placed second both times. This season I won, so it was really exciting. The very best experience I have had as a skater is the short program at Junior Worlds. My main goal was to qualify for the final and I did. I skated a clean short program and that was an amazing experience.


Q: You have been coached by Berit Steigedal and choreographed by fellow Norwegian Champion Kaja Hanevold as well as Michael Huth in Germany. What makes Berit, Michael and Kaja the best team for you personally?

A: Since I was very young Berit has been my coach. Berit and I have amazing chemistry. She has helped me at getting so much better as a skater every year. Kaja was also coached by Berit. She is an amazing choreographer. I think she and I work really well together. She choreographed both of my programs last year and also my new program this year. This year I also made a new free program to the same music I skated to last year. This program was made by Mr. Sinicyn in Oberstdorf. Since I was eight years old I have skated in Oberstdorf, Germany with Michael Huth and other really good coaches. Mr. Huth has helped me improve with my skating and jumping technique. I feel he is a really good coach for me. I have decided that I will live in Oberstdorf and be coached by Mr. Huth. Here I also have a lot of other boys to practice with which I don't have at home in Norway.

A: My free program this year will be to the same music as last year: "Tango" by Astor Piazzolla. My new short program is "A Day In The Life" by The Beatles. I am really excited about this program and I am looking forward to skating it in competitions next season. My main goal for this season is to show myself to the figure skating world and to train hard in practice so my competitions will be good.

A: My strength as a skater would definitely be that I work hard in practice and I love to compete. My weakness has to be that in competitions it is hard for me to get really focused. Since I am the only Norwegian boy skating in juniors or seniors in Norway, the competitions at home are the hardest for me. At Nationals this year I did skate one of the best free programs of this season and I did triple lutz in the short and free programs so I am getting better at this.

Q: If someone were to visit Norway, what are the three places they would ABSOLUTELY have to go?

A: It's hard to choose only three places people should go to in Norway because it is a beautiful country. If I would choose three places it has to be Oslo (the capital of Norway), Galdhøpiggen (Norway's biggest mountains) and Hardangervidda (Norway's most beautiful place).


Q: If you were going on a backpacking trip across Europe and could only pack three things in your suitcase, what would they be?

A: (laughing) If I were going on a backpacking trip trough Europe and I could only bring three things I would bring money, my phone and if there were space in my suitcase, I would bring a friend.

A: My three favourite skaters of all time are Stephane Lambiel, Evan Lysacek and Carolina Kostner. Those three are skaters that have inspired me to get better and better every day. I have watched their performances on YouTube over and over.

A: What most people don't know about me is that I LOVE TV shows. I watch all kinds of TV shows like Criminal Minds, So You Think You Can Dance?, Modern Family, Suits and many more.

A: I cannot find one thing I love most about figure skating because I love that there are so many things you have to work on. You can always improve in something. I love competing and I love that all the hard work pays off when you go to competitions all over the world and meet new people and friends.

In order for this blog to reach a wider audience, I could sure use a little help. All you have to do is "LIKE" the blog's Facebook page at http://www.facebook.com/SkateGuard for instant access to all of the new blog articles, features and interviews as they are made available. I also share daily updates and headlines from the skating world, videos and much more that's not here on the blog, so if you love figure skating as much I do, it would really be rude not to get on that inside edge! You can also follow all of the fun along on Twitter at http://twitter.com/SkateGuardBlog. If you know someone who loves skating, tell them! It's all about getting a dialogue going on! Fabulous skating is too fabulous to keep secret. Am I right or am I right?
Posted by Skate Guard Blog at October 01, 2014
Email ThisBlogThis!Share to TwitterShare to FacebookShare to Pinterest
Newer Post Older Post Home