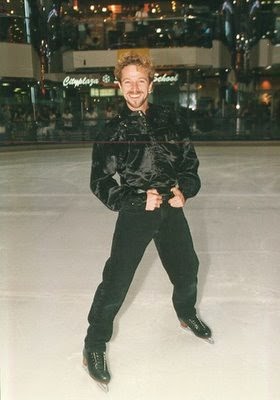 One of the aspects I love most about writing a figure skating blog is having the chance to share the stories of skaters who may not have won an Olympic medal or a World title but who without question left an indelible footprint on the sport and left the ice better than they found it. Robert Wagenhoffer was without question one of those skaters. 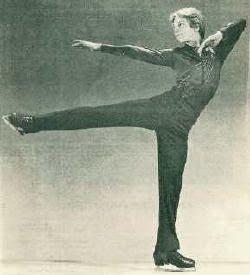 The son of Ada (Gustafson) and Michael Wagenhoffer, Robert Andrew Wagenhoffer was born July 5, 1960 in San Bernardino, California. His first skating efforts were actually on rollers. He once stated that he opted for ice skating because roller skating "wasn't as smooth and lyrical as the ice." His amateur career could not have been any busier. Following in the footsteps of fellow Californian Ken Shelley, he balanced careers in elite level singles and pairs skating and found success in both arenas, pardon the pun.

As a junior, he was both the U.S. men's and pairs champion in the same year. Moving up to the senior ranks, he won the men's competition at both the 1977 Grand Prix St. Gervais competition in France and Nebelhorn Trophy in Germany, which were held back to back at the time with many of the same skaters travelling via train from France to Oberstdorf to compete in both events. During this time, Robert was also practicing quadruple toe-loops in competition... around a decade before the first ratified quad in competition would be landed by Kurt Browning.


At the 1978 U.S. Championships, Robert turned his attention to pairs skating and finished just off the podium with his partner Vicki Heasley. The winners that year were Tai Babilonia and Randy Gardner and the silver medallists were Gail Hamula and Frank Sweiding, who would go on to become a World Professional Champion with Anita Hartshorn. The following season, Robert would again go on to skate singles during the fall season and medal in an invitational event in then Czechoslovakia before winning the silver medal at the 1979 U.S. Championships and going on to finish sixth in his only trip to the World Championships as a pairs skater. Despite devoting his full attention to pairs skating the following season and medalling at both Skate America and the NHK Trophy, Robert and partner Vicki would finish off the podium at the 1980 U.S. Championships and narrowly miss a trip to the Lake Placid Olympics. Their partnership dissolved and Robert focused his undivided attention to singles skating.


Robert won a silver medal at the NHK Trophy in the fall of 1980 right behind Japan's Fumio Igarashi and skated very well at the 1981 U.S. Figure Skating Championships in San Diego, California to finish third right behind Scott Hamilton and David Santee. This result afforded Robert another trip to the World Championships, where he finished in the top ten. The following season would prove to be his final as an amateur and his finest. He started the season off with a silver medal at Skate America, sandwiched right between two future Olympic Gold Medallists - Scott Hamilton and Brian Boitano. From there, he went on to win the silver medal behind Hamilton at that year's U.S. Championships and again earn a spot on the World team. Robert's third trip to the World Championships saw him duplicate the sixth place finish he'd earned in pairs in 1979, proving without question he was every bit as good a singles skater as a pairs skater (if not better). Following those World Championships in Copenhagen, Robert turned professional and joined the Ice Capades. It was only once he turned professional the true measure of his genius on the ice would come to be duly appreciated.

Robert was both a showy and entertaining skater and a sensitive, creative artist. Highlights of his programs included his backflip, side cartwheel and wonderfully centered and cleverly ingenuitive spins. His career as a professional saw him tour with not only Ice Capades but also Tom Collins' Tour Of Champions, Gershwin On Ice (which he also choreographed) and the World Cup Champions On Ice theatre tour. He performed at Sea World and won the World Professional Figure Skating Championships in Jaca, Spain both in 1982 and 1989, the 1989 U.S. Open title and competed professionally at the World Cup Of Skating competitions held in the late eighties and early nineties in Canada as well. He choreographed for the Nutcracker On Ice tour and Brian Boitano's Skate Against Hate show and performed in fundraisers for AIDS research including Rock The Ice and Ice Fantastic. Robert had been touched very personally by HIV/AIDS, having lost his brother in 1992 and his partner Billy Lawe three years later. Tragically, the same disease that claimed the lives of two of the people closest to him would also take Robert from the skating world way too soon. He passed away on December 13, 1999 at thirty nine years of age.

In the 1999 "Chicago Tribune" Phil Hersh article "Skater's Death Raises Questions", Scott Hamilton is quoted in saying of his former competitor, "Robert was one of the most gifted jumpers and classiest competitors I have ever known. He made everything look effortless. He gave all of us competing against him something to think about."

I want to finish this off by sharing the words of American Open Champion Doug Mattis, who graciously and beautifully remembered his mentor and friend: "When I was a kid, I watched Robert compete with wide eyes. I didn't want to blink, lest I miss something that he did. His movement seemed to ooze with ease like hard sauce drizzling over pudding. And the jumps were... jaw-dropping. I remember hearing from the kids in the ultra-cool L.A. crowd that he probably could have trained a bit harder…that he was somewhat resistant of the competitive machine demanding that he be what they wanted, on and off the ice. There were many rumours that he was gay, hissed as asides by skating officials and coaches as both put-down and explanation of why he might not be an odd-on favorite to inherit the national title. Those rumours resonated with me - they made us comrades, even though we’d only met to say hello (I was kid in novice when he was in seniors). We faced the same hate for being who we were born to be. Even though I was closeted as a teenager, I felt like Robert and I were brothers (along with the other gay people in skating that weren't the subject of so much conversation). His ability made him, to me, like Merlin…how did he do triples and quads with such ease? Let alone his fluidity of movement, extension, and musicality? His story, as told to me by people as a tacit threat not to be like him…made him, to me, like someone I knew I'd befriend at some point. We were friendly over the years. We'd see each other at parties or at the club (after he'd turned pro, while I was still competing), and he'd always have an encouraging word to say and tell me some small thing that I’d done, skating-wise, that had impressed him. Robert Wagenhoffer being nice to me was such a very, very cool thing to me. I deeply appreciated it. We saw each other briefly after Rick Scarry (a skater and Robert's close friend) had died of AIDS…and I just remember bursting into tears - even though Rick and I were just casual pals. Robert hugged me and assured me everything would be okay… when it was his friendship with Rick that I was trying to reference in my words to him, 'I'm so sorry'.) I was young, completely afraid and Robert, whom I should have been consoling, gave me a hug and told me everything would be okay. We worked together for the first time in the early nineties. He choreographed some numbers for me in a show in Miami. Every day was a joy. Robert had an easy laugh and we both liked hard work, for hours and hours on the ice sometimes, to feel like play time. And it did. He was there with his partner, Billy Lawe. Seeing the deep connection they had... it was inspiring to me. I introduced he and Billy to the gorgeous guy I was dating over dinner one night and next day during a quiet moment between stints of choreography, he said, 'Don’t hate me. That guy? You can do better.' Later Billy showed up at the rehearsal and said to Robert, 'Did you tell him, yet?' and Robert nodded, laughed, and tucked his straggly blonde hair behind his ears (as he often did). Billy said, 'Doug, we think the world of you. You can do better.' I had new brothers. A new addition to my family. Robert made sure not to choreograph 'down' to me. He challenged me, made sure I could do all of his signature moves (as a means by which to make me see the work and abandon the notion that it was all 'magic'), and he made sure the numbers he did for me were tricky - deathly tricky - so I would go on stage… every night… nervous. 'That’s how you keep your self feeling alive on skates, brother!' he would tell me, laughing. A few years later, we both starred in the Santa Rosa Christmas show - he as the primary star, me as a featured skater. Billy's health wasn't great and Robert and I had talks about how he was handling it and getting through each day. Just a season later, I starred in that same headliner role… and did a number ("Can’t Cry Hard Enough") largely based on those conversations - a kind of tribute to both Robert and all of the men that we have loved in skating and lost to AIDS. The night I heard we lost Robert I cried and cried. Skating was everything to him - his primary demon and salvation. I could say one million times 'I wish' about the things I wish for Robert - that he'd survived though protease inhibitors… that the skating machine had been more kind to him while he competed... but I know Robert would just laugh at me, tuck his hair behind his ears, and tell me to get on with being happy in my life and spreading the love. So I will."

Skate Guard is a blog dedicated to preserving the rich, colourful and fascinating history of figure skating and archives hundreds of compelling features and interviews in a searchable format for readers worldwide. Though there never has been nor will there be a charge for access to these resources, you taking the time to 'like' on the blog's Facebook page at http://www.facebook.com/SkateGuard would be so very much appreciated. Already 'liking'? Consider sharing this feature for others via social media. It would make all the difference in the blog reaching a wider audience. Have a question or comment regarding anything you have read here or have a suggestion for a topic related to figure skating history you would like to see covered? I'd love to hear from you! Learn the many ways you can reach out at http://skateguard1.blogspot.ca/p/contact.html.
Posted by Skate Guard Blog at November 17, 2014
Email ThisBlogThis!Share to TwitterShare to FacebookShare to Pinterest
Newer Post Older Post Home