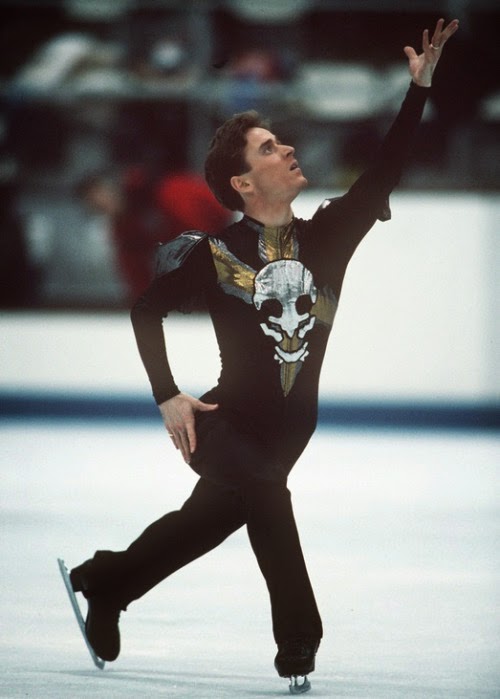 I've long admired Petr Barna's skating. Without question an example of a skater who was able to achieve both technical excellence and develop an artistic craft as a skater throughout his lengthy and successful career as a competitive skater, Barna's crowning achievements on paper were his 1992 Olympic bronze medal and European title. There's so much more to his story though. This seven time Czechoslovakian Champion was the first skater to complete a quadruple jump in Olympic competition, the first man to earn a 6.0 in the technical or short program in World competition and a skater who earned the praise of judges, audiences and peers alike for his masterful interpretation of music. When he was on, Petr Barna had 'the whole package'. Since turning professional in 1992, he's worn many hats: husband, father, professional skater and most recently, coach in Switzerland. It was my absolute privilege to have chance to reflect with Petr on his competitive career, talk about the current state and future of skating and life today in this short but sensational interview I'm thrilled to share:

Q: Your "amateur" career was such an incredible one. In addition to the Olympic bronze medal in 1992, you won four medals at the European Championships (including gold in 1992), were credited as the first person in history to land a quad jump at the Olympics and were also the first men's skater to earn a perfect score of 6.0 at the World Championships in the short program. Add to that eight Czechoslovakian titles, over ten international titles... Wow. Looking back at that time in career now, what moments are you the proudest of and which were the most challenging?

A: I think the most challenging was my bronze medal at Europeans in Birmingham, because I had skated with a sprained ankle on my right foot. I am happy about all my achievements, but of course the Olympic medal is number one on my list. I am proud that I was able to be competitive consistently for ten years on the highest level and give a challenge to the skaters from the U.S.A. ,Canada and Russia. I have to give thanks to my coach who was protecting me from the Communist system at the time.

Q: You actually started training in an outdoor rink in Czechoslovakia in the early seventies the same year that Ondrej Nepela won his Olympic gold medal. How influential was Nepela's skating on your own career?

A: Actually, I was not so much looking up to Ondrej as a skater but more as human being. He was always a very down to earth kind of person. He always treated me and other people very nicely and that is what I took from knowing him personally.

Q: You of course competed constantly against Jozef Sabovcik throughout your careers both as ISU eligible and professional skaters. Was there a friendship there, a rivalry, or both?

A: I think for me Jozef was more always more of a friend than a rival. He was a massive jumper!

Q: You turned professional in 1992 and had a successful career that spanned over a decade, touring with Champions On Ice and the World Cup tour and competed in countless professional competitions including the World Professional Championships, Challenge Of Champions and Miko Masters competition in France. What are you proudest of about your professional career and what would you have done differently?

A: I do not think I would want do anything differently. I would just want do it again. I do not regret what I have done. What I regret is what I haven't done. The best time as a skater is always when you get that standing ovation.

Q: Of all of the programs you have skated over the years, if you had to pick a favourite what would it be?

A: I like all my programs. They are part of me and my team who helped me to build them. The most memorable ones though would have to be "Paganini", "Hamlet" and "Chaplin".

Q: Was returning to eligible competition during the ISU reinstatement period before and after the Lillehammer Games something you ever considered?

A: In 1993, I was not thinking about it. When I think about it now, I would go for it. It would have prolonged my skating career but then again I would have missed many other things outside of skating.

Q: As a coach, you now have the opportunity to view the sport through a different lens. Do you like or dislike the direction that skating is going in these days and how do you perceive figure skating's future?

A: I think for coaches, it is easier. You do not have to be so creative. You know what needs to be in the program. There is not much time left for interesting stuff, though. I feel bad for the skaters. They have to do a one minute step sequence and three fifteen second spins. It is very energy consuming and that is why they have no energy to create masterpieces. Only very few are able to create memorable programs. I wish skaters would have more freedom, then they would be able to create memorable programs. They are so talented and they could do so much better. I think the future is in the quality rather than in the quantity.

A: Igor Bobrin was very inventive. Robin Cousins for his posture, flow and extensions. Brian Boitano for his dedication to training and jump technique.

A: I started as skier before skating, I am very good in table tennis and have handicap of five in golf.

A: Keep going and do not look back.

Skate Guard is a blog dedicated to preserving the rich, colourful and fascinating history of figure skating and archives hundreds of compelling features and interviews in a searchable format for readers worldwide. Though there never has been nor will there be a charge for access to these resources, you taking the time to 'like' on the blog's Facebook page at http://www.facebook.com/SkateGuard would be so very much appreciated. Already 'liking'? Consider sharing this feature for others via social media. It would make all the difference in the blog reaching a wider audience. Have a question or comment regarding anything you have read here or have a suggestion for a topic related figure skating history you would like to see covered? I'd love to hear from you! Learn the many ways you can reach out at http://skateguard1.blogspot.ca/p/contact.html.
Posted by Skate Guard Blog at July 02, 2015
Email ThisBlogThis!Share to TwitterShare to FacebookShare to Pinterest
Newer Post Older Post Home