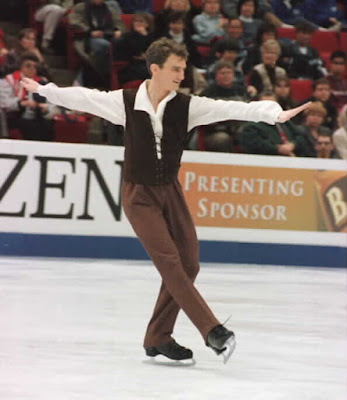 When I made the decision to phase out interviews on the blog in June, I had originally planned for the July 5 interview with Olympic Gold Medallist Robin Cousins to be the final one, but due true to life, things don't always work out the way you originally plan! I had actually set up an interview with World Champion, six time U.S. Champion and three time Olympian Todd Eldredge prior to my interviews with Robin and Petr Barna but due to scheduling, we weren't able to chat until after I had made the announcement. So for both me and you, this turned out to be an extra special treat as I have long admired and respected Todd and his skating. An incredible athlete who actually won his first of six World medals back in 1990 right here in Halifax, Todd's career spanned more than a decade and has inspired so many of us. We reflected on his time competing, talked shop about the IJS system and the current crop of elite men's skaters as well as about coaching, performing professionally and much more. I hope you all enjoy this wonderful bonus interview as much as I did!:

Q: The things you accomplished during your competitive career were just incredible. The 1996 World title (and four other World medals), six U.S. titles spanning over a decade, three trips to the Olympics, five wins at Skate America, the Goodwill Games title in 1998... I could go on and on and if you had the time, I'd be happy to. If you had to pick one moment that was the most fulfilling and another that was by far the most excruciating, which would they be?

A: The most fulfilling would have to be the obvious - standing atop the podium at the Worlds in Edmonton. It's the ultimate goal for any skater to be able to win a World title or Olympic title so to have been able to come back from several years of injuries and hard times to pull that off was an incredible feeling. The most excruciating would probably be dislocating my shoulder at the beginning of the '98 Olympic season and losing valuable training time to feel one hundred percent prepared for the outcome I had hoped for.


Q: One part of your career I'd like to ask about are your experiences competing in the pro-am and open events. You won a great deal of them including the Canadian Pro/Open, Ultimate Four and Masters Of Figure Skating Competition. For you personally, how were these kinds of events particularly fulfilling and do you think figure skating would benefit from an influx of these events in the present day?

A: I enjoyed participating in those events. They were great for getting and keeping in top form as well as for reaching outside the box creatively which I believe helped me grow more as a performer in my later years of competing. I think there could be a place for events like those in the future, however I believe the reason those events worked as well as they did is they were a showcase of past and present all coming together under somewhat similar rules to what we had all competed with. It would be very different now to get any of the marquee names from the past as they would have to learn an entirely different way of skating. They could work if you only used past champion skaters who have competed under the IJS system as that would keep them relevant with the current rules... unless they change the rules every week.


Q: You're now coaching in McKinney, Texas alongside your former coach Richard Callaghan. What is your own personal coaching philosophy?

A: I am enjoying my time coaching both figure skater and hockey players. They are both rewarding in their own right. When you have a skater who scores a personal best or completes a new move or passes a test or if I have a hockey player who makes it onto a higher level team or simply gets on a team for the first time. It's fun to be a part of the next generation of both sports. I like encouraging the young kids who are interested in skating and hockey to have fun with it and work hard because you never know how far it will take you.

Q: Whether it's coming from people reporting on the sport or from so-called fans, we live in a different age with social media where skaters are connected twenty four hours a day with their audience. This obviously brings with it both a lot of positive and negative. What are your thoughts on the impact of social media on skaters?

A: As you say, it can be both a positive and negative for athletes. It is something that is very individual. A skater who thrives on the recognition and excitement they may get from fans via social media can use that for motivation whereas in the situation of someone facing bullying or negative criticism, then it can be harmful to their skating and even affect them personally as well. It's definitely a subject that skaters and coaches have to approach and deal with on a skater to skater basis. What works for one may not work for another.

Q: Of the men competing on the world level today, who excites you the most to watch from a coaches perspective?

A: There are many skaters I enjoy watching and each skater has something different to offer. I enjoy watching Yuzuru Hanyu for his youthful exuberance and the ease with which he is able to do all the crazy jumping passes he can do. Josh Farris' short program at Nationals was unexpected and incredible, Denis Ten reminds me of Patrick Chan a bit with the way he skates with such ease and can connect all the elements within his programs. I really enjoyed seeing Adam Rippon this year go for the quad lutz but moreso he really came to the rink with a renewed aggressiveness and confidence that he was missing before.

Q: How important is diet in your life?

A: My wife has a plethora of delicious things she can whip up, all of which are extremely healthy. I should have eaten like this when I was training and competing!


Q: Is touring professionally again something you see in your future?

A: I don't think I will tour again for any extended period of time at all. I am enjoying being at home with my wife and boys too much and watching them grow up that I wouldn't want to miss any of the fun. Our son Ayrton keeps all of us laughing with his hilarious personality. Who wouldn't want to be home for that all the time?

A: My top three favourite skaters of all time.. One would have to be Janet Lynn. She was and still is a pioneer for the sport and is one of the sweetest people you will ever meet. She always seemed to have a smile of her face as she floated across the ice. Brian Boitano was the skater I wanted to emulate most because of his consistency and longevity in the sport. Who else is 50+ and still performing and doing triples? Awesome! Michelle Kwan... I think her record speaks for itself as far as her skating is concerned, but for someone who had such a long a illustrious career to have reinvented herself to work as an envoy for the government to help others around the world is nothing short of remarkable.

Q: If you could change one thing about the current judging system, what would it be?

A: The system... I like the idea that it's a cumulative points system from short to long so there is a chance for someone who skates well and sits in sixth place, but only a couple points behind, to be able to pull up and win any event. I don't necessarily like the idea that the audience needs to be given so much information about the rules and scoring that they become disinterested and confused at what they are watching and why things are being scored as they are. If I had to understand what the angle of attack and the spin rate of the ball and the groove depth of the club and the swing plane and the swing speed and the shaft angle and the wind direction and how that affected the outcome on every shot during a round of golf at the Masters, I would be exhausted after the first hole, totally confused and would most likely switch the TV over to something else I could just enjoy watching for the purity of whatever that activity is football, baseball, hockey, auto racing or even the Food Network. I get it there has to be rules, but when it gets so complex that it becomes difficult to follow and understand for those not in the sport then it isn't working to help keep those who are interested still watching and generate more interest for those who might not be.


Q: If you could go back in time and tell a twenty year old Todd Eldredge one thing, what would it be?

A: Work hard, but work smarter. I was a work horse doing run through after run through and working all my jumps over and over until I felt happy with my completion percentages. Toward the end of my career, I worked so much smarter and gave myself limits of the number of things I needed to do in a day and just made sure I did them when I intended to instead of beating things into the ground. I have the hip replacement to show for it now!

A: One of the most important lessons skating has taught me is focus. If you focus on something positively you will always have a positive outcome, no matter if you achieve the result you expected of yourself or not you will take the positive out of any situation and apply that towards your next goal and so on.

Skate Guard is a blog dedicated to preserving the rich, colourful and fascinating history of figure skating and archives hundreds of compelling features and interviews in a searchable format for readers worldwide. Though there never has been nor will there be a charge for access to these resources, you taking the time to 'like' on the blog's Facebook page at http://www.facebook.com/SkateGuard would be so very much appreciated. Already 'liking'? Consider sharing this feature for others via social media. It would make all the difference in the blog reaching a wider audience. Have a question or comment regarding anything you have read here or have a suggestion for a topic related to figure skating history you would like to see covered? I'd love to hear from you! Learn the many ways you can reach out at http://skateguard1.blogspot.ca/p/contact.html.
Posted by Skate Guard Blog at July 26, 2015
Email ThisBlogThis!Share to TwitterShare to FacebookShare to Pinterest
Newer Post Older Post Home
"As a rule an author has one or two popular ways of contrasting the past with the present. He can treat the past as lying in comparative doleful ignorance, or he can explain that the past was infinitely superior to the day we live in. Of course, either method is the popular journalism of the moment, and in reality there is no sharp contrast, but a gradual transition which leads the past into the present." - Joel B. Liberman, Skating Club Of New York