Although not formally recognized as either the U.S. or North American Championships by 'today's standards', the Skating Club Of New York was hosting international competitions dating as far back as the 1860's called the Championships Of America, the first two of which were won by figure skating pioneer Jackson Haines. However, Haines wasn't the only American born men's skater who was turning heads at these competitions. Less than a decade later, a Chicago man named Callie C. Curtis began his utter domination of "fancy skating" at these events, winning his first of five consecutive Championships Of America in 1869. 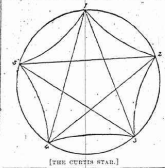 Callie C. Curtis was born April 24, 1848 in Chicago, Illinois. He was perhaps best known for his design of a figure called The Curtis Star which was described by E.T. Goodrich in the February 3, 1889 edition of the "Elmira Telegram" as "one of the prettiest and most difficult figures I ever saw cut on the ice. Nobody could accomplish it with the ease and grace that characterized his efforts, and it was finally called the 'Curtis Star'. It was formed in three parts. First there was the circle. This he did by the simple inside edge, forward toe step. At the completion of the circle the skater would jump back clear of the circle, so as to leave no marks inside of or across the circle. Then the plain star was made standing with one foot at the point... Curtis would let his left foot run a little farther away from the right; the drawing it in would bear hard on the heel of the right." As far as technical innovations, George Browne also credits Callie with introducing European skaters to the mohawk.

On March 15, 1869, Callie handed a resounding defeat in the men's event to defending Championships Of America champion Frank Swift in Rochester, New York. An account from Julian T. Fitzgerald's "History On Ice and Roller Skating - 1916", graciously provided by Karen Cover at the U.S. Figure Skating Museum, explained, "Frank Swift was then Champion of America, having won the Diamond Medal the previous year at Allegheny City, Pa. Feb 6., 1868. Twice he had successfully defended his title, but the Chicago boy was too much for him and he had to bow to his superior. When Mr. Curtis was declared the winner by a score of 47 points to 41, Mr. Swift took his defeat manfully and skated up to Mr. Curtis and pinned the Diamond Medal on his breast." 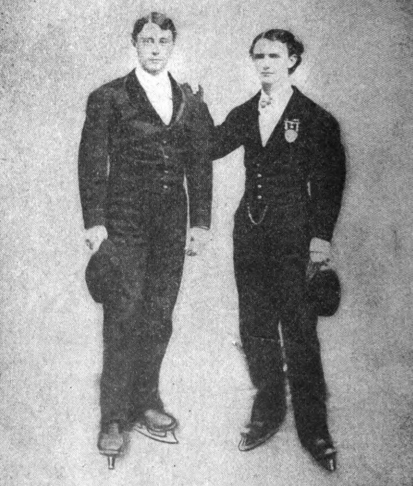 The story had been a little different less than a month earlier, when Callie caused quite a stir in the city donning his finest drag and entering a women's figure skating competition. The February 20, 1869 edition of the "New York Clipper" gives a full account of the spectacle: "The skating public of Buffalo and Rochester were the victims of a 'sell' of the largest dimensions and most thorough description during the week ending February 6th - a hoax of so laughable a character, however, that they could not allow their angry passions to rise against the perpetrators. It turns out that 'Miss Godbout, the lady from New Brunswick' instead of being one of the 'weaker vessels' was none other than the accomplished western skatist, Callie Curtis, who is now a candidate for the championship. At the termination of the ladies' content at the Buffalo Rink on the night of the 6th, to the astonishment of the on-lookers, the majority of whom enjoyed the joke, though some, with no humor in their souls, seemed disposed to find fault. To silence these grumblers and set himself right before the public, Manager Harvey published the following card in the local journals of the 8th: 'The impossibility of getting two first class lady skaters to compete in a public match for your amusement, induced me to have one of our finest male professionals (Callie Curtis, the 'Star Of The West') assume the role of a lady for the nonce, and it was my intention to have divulged the secret on Thursday evening, but during the contest that evening the idea suggested itself to me that I could afford you a second evening's amusement, and in the interim have the same skaters display their skill in our Rochester Rink. This being accomplished I lost no time in revealing to you the 'Star of the West' sans veil, sans wig, apologizing to you for the temporary deception, conceived and carried out to amuse you. Some who were in the secret predicted that the revelation of it would be met with disapproval and this morning counselled me either to postpone the match indefinitely or allow Miss Godbout to preserve her incognito; my disinclination to disappoint you by failing to perform what I had advertised was an insurmountable objection to the first course, and my determination to reveal the secret, both in justice to you and to add fresh zest to the entertainment, precluded the adoption of the second.'" The kicker? The last line of the article: "Curtis perpetrated a like sell upon the good people of Pittsburgh and vicinity last season." That wasn't the only trouble Curtis got himself into while in New York skating. Another 1869 article from the same paper stated, "Callie Curtis was recently arrested upon a charge of seduction, preferred by a chambermaid at one of the Rochester N.Y. hotels, but upon examination he proved the falsity of the charge and was acquitted." 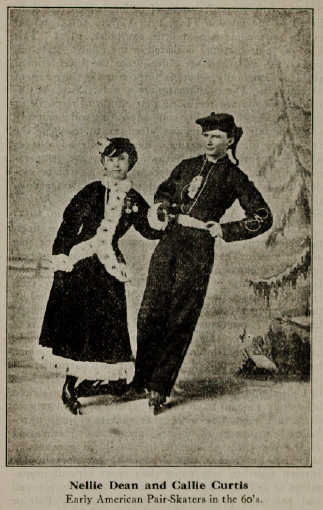 Despite his on-ice trickery and this off-ice allegation, Callie continued to dominate skating in America during this period, winning the next four Championships Of America. In late October 1871, ice was installed at the Metropolitan Theatre and Callie performed "a great double and single comic and fancy skating act" with Billie Burt in conjunction with a production of John Baldwin Buckstone's "Green Bushes; Or, A Hundred Years Ago". He was also an accomplished roller skater. Callie was the organizer and manager of the Championship of the Pacific Coast in roller skating in San Francisco in 1872. According to a September 1, 1872 article, he "went through each piece before the contestants, and in their presence Mr. Curtis was applauded to the echo when he led off in the first piece. He skims over the boards as gracefully with the clumsy roller skates as if he were sliding on smooth ice... and performs as many different feats". His demonstration of the elements that would be judged at that event totalled over twenty different figures, steps and "specialties, embracing original and peculiar movements". Callie also mentored a young skater named Johnnie Cook of Cleveland, Ohio, who earned the reputation as "the human top" for his impressively fast spinning ability. Reportedly, his double-flat spin later popularized by Sonja Henie was a sight to behold. Tragically, Cooke died at only twenty years of age, never finding the same success in competition as his accomplished coach.

Here's where Callie's story collides with that of Mabel Davidson, whose career and life we explored back in January. A roller and figure skater from Concord, Massachusetts named Carrie Augusta Moore had put together an exhibition tour of Europe in 1873. Callie headed over with E.T. Goodrich to skate in that tour, paving the way for the Davidson family (with Mabel as the star attraction) to tour London and Paris in 1896. The absence of the reigning champion would have obviously opened the door for a new champion and I'm sure some of his competitors couldn't have been happier. An undated newspaper clipping from the era found in the Canadian Jewish Heritage Network's Louis Rubenstein collection noted that Callie was "no longer a resident of Chicago, and living now in Europe, will not trouble the aspirants for his title with his presence." Certainly has a bit of a "don't let the door hit you on the way out" ring to it, doesn't it?
In 1882, Callie won a competition for professionals, held in conjunction with the Internationalen Preis-Figurenlaufen (Great International Skating Tournament) in Vienna, defeating Axel Paulsen's brother Edwin. Four years later, he competed in an event in Germany held in conjunction with the Hamburg and Altona Skating Club's international speed skating tournament. The winner of the speed skating race was of course Axel Paulsen, but it was Callie who defeated Axel in the figure skating contest. The winner, however, was C. Werner of Christiana.
Callie later settled in a suburb of Hamburg, where he operated a restaurant. He passed away there on June 16, 1903 at the age of fifty-five. 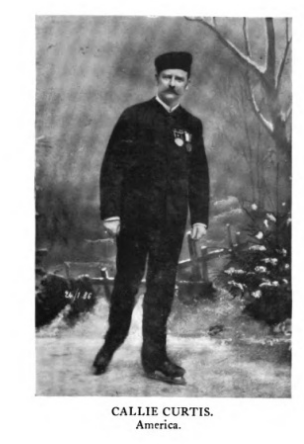 Whether he was skating on roller or figure skates, in men's or women's dress, outdoors on a pond or on a theatre stage, beating American skaters or Axel jump inventors, Callie certainly made an impression everywhere he went and I'm happy I was able to unearth some of his story and glue together the broken vase pieces. Without an understanding of where figure skating came from, we'll never be able to get a firm handle on where it's going.

Skate Guard is a blog dedicated to preserving the rich, colourful and fascinating history of figure skating. Over ten years, the blog has featured over a thousand free articles covering all aspects of the sport's history, as well as four compelling in-depth features. To read the latest articles, follow the blog on Facebook, Twitter, Pinterest and YouTube. If you enjoy Skate Guard, please show your support for this archive by ordering a copy of the figure skating reference books "The Almanac of Canadian Figure Skating", "Technical Merit: A History of Figure Skating Jumps" and "A Bibliography of Figure Skating": https://skateguard1.blogspot.com/p/buy-book.html.
Posted by Skate Guard Blog at August 10, 2015
Email ThisBlogThis!Share to TwitterShare to FacebookShare to Pinterest
Newer Post Older Post Home