Decorum And Double Threes: Skating In The English Style 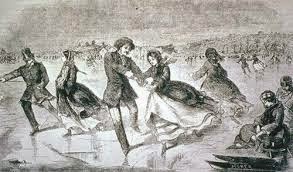 There's a little private irony to the timing of today's subject matter. I actually lay out a calendar of when each blog will be published to try to give a bit of diversity in terms of era, subject matter and location of all of the skating history topics explored. I had December laid out months in advance but only two days ago, I received some reader mail from a descendant of British figure skating pioneer Henry Eugene Vandervell, whose story we delved into briefly back in April. And here we are again today, discussing his baby...  the now largely defunct English Style of skating.

When I say English Style, I am not in any way referring to the cold, calculated precision of The Modern English School that produced fabulous skaters like Cecilia Colledge and Henry Graham Sharp. I am also not referring to the characteristic elegance and ingenuity of more modern British skaters like John Curry, Robin Cousins and Jayne Torvill and Christopher Dean. On the contrary. I am referring to an extremely distinctive and uniquely British style of skating that reigned supreme in that country prior to the twentieth century.

In Victorian England, figure skating was a perfect mirror of society itself. Stiff, rigid, unforgiving... Back then, skaters had stiff, erect posture and knees. They kept their arms at their sides at all times, even if it impeded their ability to turn. If you were a skater at The Skating Club in London, which formed in 1830, the loops you were doing were the kind with your feet firmly planted on the ice, not the jump later invented by Werner Rittberger that we see routinely in the triple rotation variety these days. There were no jumps or spins in the English Style. In fact, the manner in which figures were skated barely resembled the school figures that prevailed for much of the twentieth century in international competition. 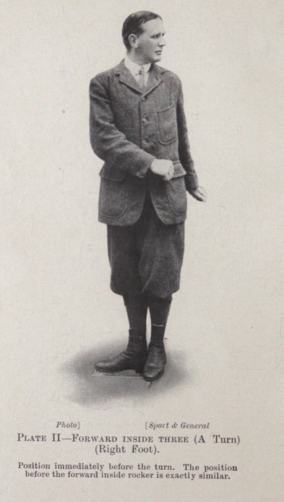 While skaters in Continental Europe, Canada and the United States were all experimenting with what we know today as free skating, the Britons held firmly to their ideals about what skating should be. Vandervell, who was instrumental in educating and instructing skaters in the English Style, had great convinction in the belief that one's socio-economic background played a role in their skating talent. In his 1873 book, he wrote: "Among the lower classes, as we have often noticed on the ice, notwithstanding that as a class they excel in most of the manly exercises, and in rapid skating or running are expert. Yet, when we come to figure-skating, we shall not fear contradiction when we assert that the most graceful and finished skaters come from the better educated, or the middle and upper classes, the clergy and military, and gentlemen belonging to any of the higher professions, being at the top of the scale; very few of the lower class, as we descend the social scale, knowing more than to 'go ahead' and when one of these worthies reads the doings on the ice in the daily papers, he doubtless gets somewhat mystified with waltzes, quadrilles, polkas, serpents, pedlar's acres, and birds of every description, as well he might, and small blame to him." Vandervell goes on and on to this point, reminding us that not for a second should we think that this stiff English Style of skating in the Victorian Era wasn't anything less than a prim and proper 'old boy's club'. 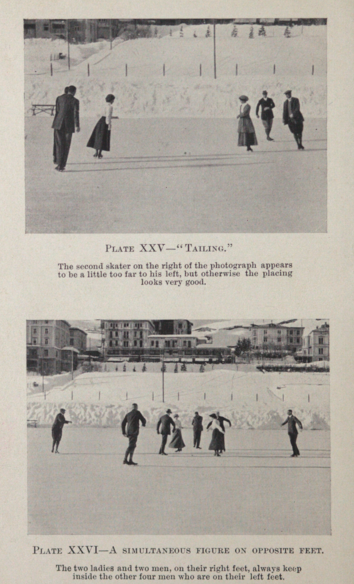 Getting back to the fundamentals of the style itself, Mary Louise Adams' book "Artistic Impressions: Figure Skating, Masculinity, and the Limits of Sport" notes that "Once mastered, basic turns and edges were skated in unison by groups. Although groups sometimes had up to ten skaters, the usual number was four. One skater would act as a caller, giving instructions to the others. The goal of the exercise was conformity. An orange was used to mark a central point on the ice and the skaters would perform their turns and edges moving towards and then away from the orange. The more perfectly they could match each other's movements, the more successful the exercise. Anything difficult to match, for instance, the degree of bend in a knee, was eliminated. All flourishes were eliminated. Anything that would set one skater apart from the others was eliminated. Skating, which had once offered the possibility of individual expression and freedom of movement, evolved mid-century into a kind of regimented team activity." To those last sentences speak to you on any level with regards to the uniformity of today's IJS system? They certainly do to me, that's for sure. I digress. 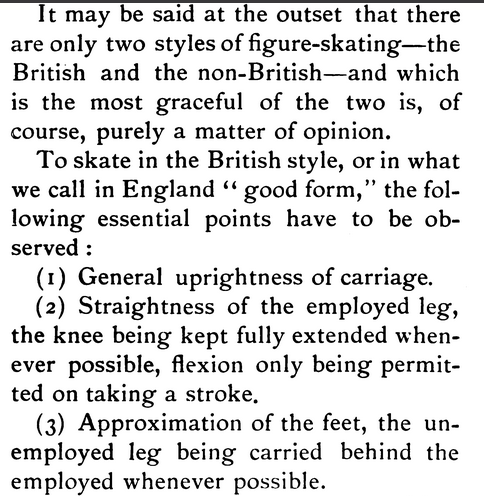 In his book "Figure Skating", Monagu Monier-Williams offers a rather succinct description of good English Style form: "At the moment when he firmly on his edge, the knee must be promptly extended, and the body held absolutely upright, but with a slight sideways inclination; that is to say, if the skater is progressing forwards on the right foot, the body must not look full front, but the right shoulder and the right thigh must lead the left shoulder and thigh being slightly turned to the rear. The unemployed leg must be kept free of the ice, and carried behind the employed leg wherever possible, the heels of the two feet being approximated. The head must always be turned the direction of progress, and is to be carried horizontally, and never inclined either upwards or downwards. A tendency to look down on the ice is the commonest ever, and is to be carefully avoided. The arms should also hang loosely by the sides of the body in an easy position, and should not swing about unnecessarily." Thinking of the importance of arms in teaching the most basic of skating moves (a three turn for example) to skaters today, the English Style seems almost impossible, but instruction in this rigid, uniform style was everything in the few skating clubs in operation in England and Scotland during the Victorian era, thanks greatly to instructional writing by authors like Vandervell. 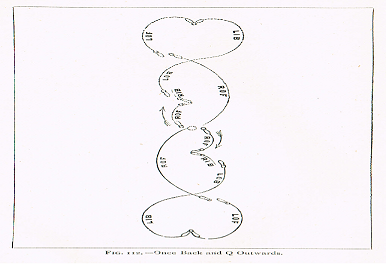 There was a certain disdain many practitioners of this style felt for European skaters practicing the Continental Style. M. Bland Jameson wrote to skating historian Dennis Bird: "To us sober English skaters - with our severely-controlled movements, these exuberant (International) skaters seemed to be showing off and performing circus stunts. We looked askance at their black tunics and tight-fitting breeches, trimmed with Astrakhan fur. Discourteously, and not to their faces, we called them 'lion tamers'... I think it is possible, even probable, there really was a deep feeling than amounted to animosity,,, Our efforts at combined figures must have appeared joyless and solemn to the International skaters, just as their efforts at spins seemed to us grotesque." The feeling was certainly mutual. Will Cadby wrote in "Switzerland In Winter" that "A first-class programme carried out by two expert International skaters is more beautiful and attractive than any English skating can possibly be."


With increased influence of the Continental Style taking hold in England, largely due to the fact that skaters of both styles practiced routinely together in Switzerland at the time, the English Style slowly fell out of vogue. Edgar Syers, the husband of Olympic Gold Medallist and World Champion Madge Syers, lobbied for the adoption of the Continental Style in England and was instrumental in bringing the World Figure Skating Championships to London, England in 1898. When wider audiences saw what they were effectively missing all these years, the rigid English Style's decline was hastened greatly in the last decade of the nineteenth century and after World War I, the Continental Style was the 'in thing'.

The English style may have declined in favour but it didn't die. BIS historian Elaine Hooper explained, "It continued to be most popular and there used to be an English Style Championship and tests certainly up to the 1980's and possibly longer. There was also the Challenge Cup which was a most prestigious trophy and was competed for by teams of figure skaters. I have held some of the winning medals from the early twentieth century. They were won by Phyllis and James Johnson and shown to me by their granddaughter." The Skating Club, which I mentioned earlier, became the Wimbledon Skating Club and in 1932, by command of King George V, became the Royal Skating Club. To this very day, the members of the club practice the same style originally skated in the nineteenth century at the Guildford Spectrum in Parkway, Guildford, Surrey by Vandervell and his contemporaries. Figures with terminology like "off pass", "about" and "around of... complete" are performed individually as well as hand-in-hand combined figures with both two and four skaters... with the caller and orange in a historically correct fashion. I can't express how cool I think that this style has survived literally centuries under our noses. 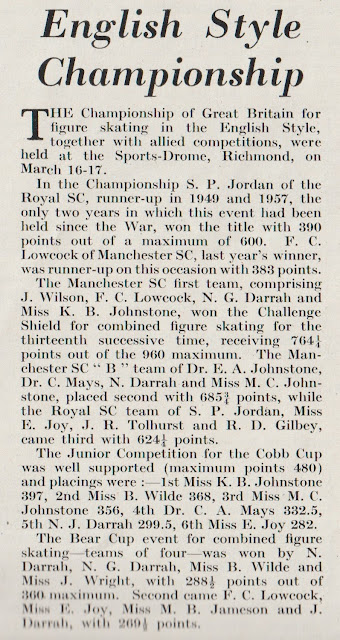 I think the moral of the story when looking back at the rigid English Style's ultimate demise in the mainstream is that when audiences saw (or were reminded of) what they were missing at those 1898 World Championships, they applauded. In this day and age when uniformity has become the name of the game in competitive skating, all it would take would be one brave competitor to flout the rules in style with a program filled with wonderfully musical level one scratch spins and footwork sequences, Cantilevers and hydroblades perfectly timed to well interpreted music to work the audience up into a frenzy... to remind them what they've missed about skating. Who, praytell, will be the rebel?

Skate Guard is a blog dedicated to preserving the rich, colourful and fascinating history of figure skating. Over ten years, the blog has featured over a thousand free articles covering all aspects of the sport's history, as well as four compelling in-depth features. To read the latest articles, follow the blog on Facebook, Twitter, Pinterest and YouTube. If you enjoy Skate Guard, please show your support for this archive by ordering a copy of the figure skating reference books "The Almanac of Canadian Figure Skating", "Technical Merit: A History of Figure Skating Jumps" and "A Bibliography of Figure Skating": https://skateguard1.blogspot.com/p/buy-book.html.
Posted by Skate Guard Blog at December 02, 2015
Email ThisBlogThis!Share to TwitterShare to FacebookShare to Pinterest
Newer Post Older Post Home