From Czechoslovakia To Canada: Camel Spins With Carole Jane Pachl 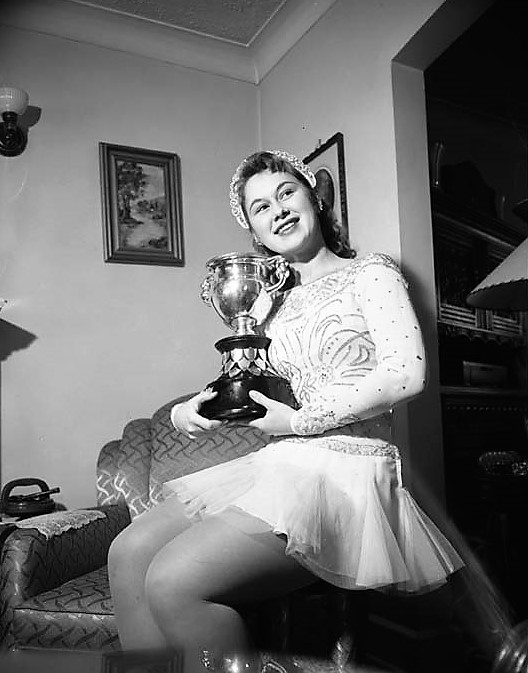 Yarmila 'Carole Jane' Pachl was born November 23, 1938 in Prague, Czechoslovakia. Her father Jan was a prominent chocolate manufacturer and her mother Jarmila a stage and film actress, so you might think her childhood might have been easy street. That simply was not the case. Her father, who opposed the Nazis during World War II, was put in a concentration camp and was fortunate enough to escape with his life. Meanwhile, his daughter was busy exploring her passion for figure skating and looking toward a brighter future. In the December 3, 1955 edition of The Ottawa Citizen, Carole Jane explained that she "loved figure skating so much that Mother took me to England where the famed Arnold Gerschwiler took a look and thought I had some promise. In early 1947 we went to St. Moritz and had some intensive coaching from Gerschwiler - that really got me enthused. I wanted to live on my skates." Despite the young skater's promise as a skater, the road to glory would definitely end up taking a curve ball. As Carole Jane's wealthy father fell out of favour with the Communists in Czechoslovakia, they seized most of his possessions and the family were forced to flee to a new life and safety in Montreal.

When she arrived, blonde-haired, blue-eyed Carole Jane divided her ice time between the Forum and Verdun Auditorium because both spaces offered the young skater free ice time. At the Forum, she'd skate extremely early in the morning and was only allowed to turn on one lightbulb while she practiced. Hockey players would file in before their early morning practices just to marvel at the young skater's obvious talent. Doors opened relatively quickly for the young skater who at the time couldn't speak a word of English when the Montreal Skating Club's then-president John Lockerby sponsored the child's early citizenship (ahead of her parents and older brother) so she could cross the U.S. border to train in Lake Placid alongside Dick Button with coach Gustave Lussi. In her free time, she enjoyed reading, collecting records and skiing. She even won a slalom race in the Laurentians. 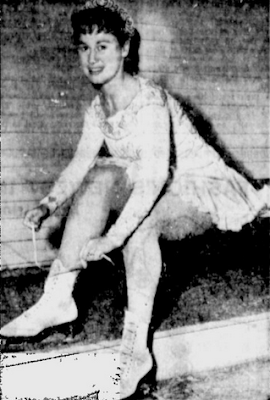 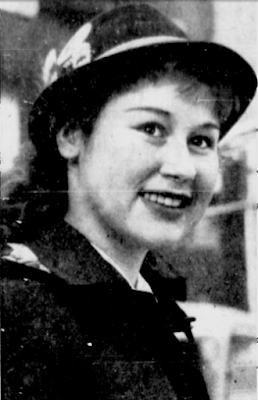 Building on the sound skating technique taught by Lussi, Carole Jane began working at the Minto Skating Club with another famous skating coach of the era, Otto Gold, who had of course coached 1948 Olympic Gold Medallist Barbara Ann Scott. She passed her gold tests in both Canada and the U.S. by the age of fifteen and a year later was one of four Canadian ladies skaters who made the trip to Oslo, Norway to compete in the 1954 World Championships where she finished eighth despite a leg injury.

The following year Carole Jane won her first of three consecutive Canadian titles as a bit of a dark horse, as she'd missed competing at Canadians the previous season after winning the bronze medal in 1953. One judge remarked, "Pachl was like a runner in a long-distance race. She didn't lead in compulsory figures and she didn't lead in the free skating - the leaders were constantly changing - but she was the most consistent competitor, and that consistency paid off." As Canadian Champion, Carole Jane headed to Vienna, Austria where she finished sixth and made quite the impression on judges, the press and the people watching, so much so that offers to turn pro arrived in only her second trip to Worlds. She turned down the offers saying "I wish to represent Canada in the 1956 Olympics in Italy - I am a Canadian, you know." The Czech turned Canadian had every reason to be confident. She was attempting double axels when many of her rivals were lucky to land their double lutzes and flips, and she had an influential coach on her arm. As talented a free skater as she was though, she was no lover of figures. She once said, "I hated them. I used to daydream through the figures thinking about the free-skating part, My father got so mad at me once for not concentrating that he took my skates and threw them in the garbage." 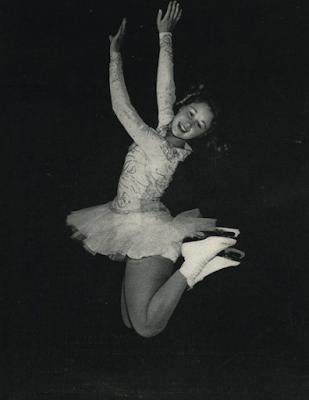 Photo courtesy "Skating" magazine
The next season, Carole Jane achieved her dream of attaining one of the two ladies spots at the 1956 Olympics in Cortina d'Ampezzo, Italy, finishing an impressive sixth in a field of twenty one skaters and besting future Olympic Gold Medallist Sjoukje Dijkstra in the process. Canadian Champion turned lawyer Ralph McCreath managed the Canadian skating team for the COA in 1956 and once recalled, "She was a breath of fresh air around the team. She was bouncy and vivacious and certainly was an asset to the team. She was a sensational skater and a really great competitor. Everybody loved her." It wasn't really all roses though. In a 1986 interview in The Gazette in Montreal, Carole explained that "three days before the competition my foot caught a crack in the ice during practice and I fell and hurt my back. They treated me for three dislocated vertabrae. But I skated anyway." Missing Worlds, she returned to Canada where her injury received a much more grim diagnosis - something was indeed broken. She explained that "they froze my back and I was able to compete (and win) in the Canadians. After that I was in a cast from my chest to my hips for ten weeks." And that's how Carole Jane retained her Canadian title. 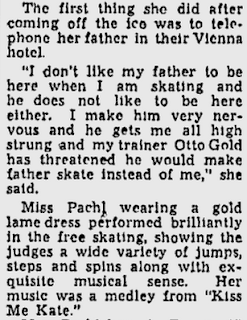 The following season, Carole Jane's last in competition, she would win her third consecutive Canadian title, take the silver medal behind Carol Heiss at the North American Championships and finish an impressive fourth at the World Championships in Colorado Springs, missing out on the bronze medal by only six points. A professional career was out of the question for the talented young skater, who was still actively receiving plenty of offers from tours. In Dick Bacon's article "Pachl earned skating titles the hard way", Carole Jane explained, "My father wouldn't sign permission. He didn't think it was right to lead a gypsy life. He thought I should learn some accounting and live a normal life." 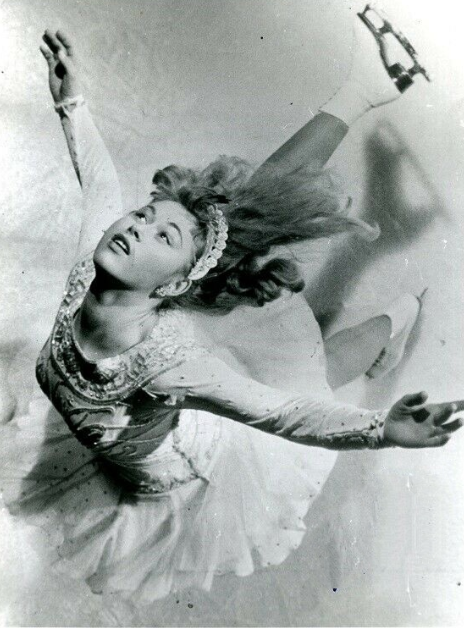 In the sixties, Carole Jane operated a hockey school at the Verdun Arena where Donnie Marshall and Phil Goyette of the Montreal Canadiens often stopped by to help out and also for a time taught figure skating. She also taught at the Rensselaer Polytechnic Institute in Troy, New York for a time. She dropped the use of her middle name Jane (which she admittedly used to sound more like Barbara Ann Scott with the three names) and answered to Carole Pedvis after marrying a food broker named Leonard Pedvis. She raised two daughters, Natalie and Kim, while working part time in the public relations industry and doing accounting for her father the former chocolatier and Holocaust survivor before moving to Florida.

Although Carole Jane never won a Olympic or World medal, this talented Czech turned Canadian skater indeed did make quite an important contribution to Canadian figure skating. She paved the way for some very talented Canadian ladies skaters like Wendy Griner and Petra Burka who would both find considerable success internationally in the sixties and she did it with style... which is no small order for anyone.

Skate Guard is a blog dedicated to preserving the rich, colourful and fascinating history of figure skating. Over ten years, the blog has featured over a thousand free articles covering all aspects of the sport's history, as well as four compelling in-depth features. To read the latest articles, follow the blog on Facebook, Twitter, Pinterest and YouTube. If you enjoy Skate Guard, please show your support for this archive by ordering a copy of the figure skating reference books "The Almanac of Canadian Figure Skating", "Technical Merit: A History of Figure Skating Jumps" and "A Bibliography of Figure Skating": https://skateguard1.blogspot.com/p/buy-book.html.
Posted by Skate Guard Blog at January 08, 2016
Email ThisBlogThis!Share to TwitterShare to FacebookShare to Pinterest
Newer Post Older Post Home