Otto Gold: The Coach Who Got On The Right Train 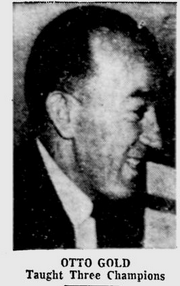 You think Gracie Gold was the first Champion skater with that lucky last name to stand on a figure skating podium? Guess again, sweet pea. Born May 18, 1909 in Prague to Mr. and Mrs. Francis Gold, Otto Gold may be best remembered as a skating coach in North America but in his youth in what was then Czechoslovakia he established himself as a force to be reckoned with a skater. At only seven years of age, he took lessons from three time Olympic Gold Medallist Gillis Grafström. Although he never represented his country at a World Championships or Olympic Games, Otto appeared at the European Championships held in Berlin in 1930 and turned more than one head by literally coming out of nowhere and snatching the silver medal behind two time Olympic Gold Medallist Karl Schäfer of Austria, Grafström's rival.

More interested in being at the boards than in continuing a competitive career, Otto turned professional in the early thirties. His first coaching engagement was in Arosa, Switzerland. After coaching in Switzerland, Otto returned to his native Prague to teach before appearing alongside World Professional Champion Pamela Prior and the Brunet's in the show "St. Moritz And The Engadine Express" at the Coliseum in London, England. 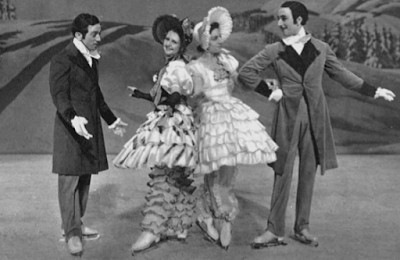 Otto Gold, Joy Ricketts and Andrée and Pierre Brunet in "St. Moritz And The Engadine Express"

Otto liked it so much in England that he stayed and coached at the Bournemouth club for a time before again returning to Prague. He never should have come back. With World War II brewing, Otto managed to escape from Czechoslovakia in 1938 just two hours before the borders of the country were closed and general mobilization was ordered. He only had time to pack his bags, hop on a train and make his way to England for a brief stopover before heading for Canada, where he'd arranged to start a new life as a skating coach. 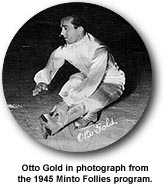 In Canada, he established himself by opening the first summer skating school in Canada in Kitchener, Ontario. He also taught at the Minto Club, in Vancouver and Lake Placid and at the Crystal Ice Skating Rink in Norwalk and continued to perform in club ice shows for a time. In 1942, Otto coached Mary Rose Thacker to her third and final Canadian ladies title. In an interview with the Ottawa Citizen on February 3, 1942 he was asked to compare Thacker with Sonja Henie and responded that comparing the two "would be like comparing Jack Dempsey with John L. Sullivan; nobody really knows. They are of different eras so one can one can only guess." He said of Thacker that "Mary Rose is blessed with much natural talent but her greatest asset is her capacity for work. Her school figures are almost perfect, but her free skating can be improved still more."

Otto took his job seriously. He had a reputation for being a stern coach with 'piercing black eyes'... but he got results. Olympic Gold Medallist Barbara Ann Scott King, who took from Otto, once said "I think it's very good to have a coach that doesn't praise you much." He complimented her after a competitive performance but once during their seven year partnership. In David Young's book "The Golden Age Of Canadian Figure Skating", Young wrote that "one time, Barbara Ann was having trouble with a three-change-three which required that the right knee be turned out. After two days of turning the offending knee inwards, Otto ordered her to go home and write out one hundred times, 'When doing a three-change-three, I must keep my right knee turned out.' With her busy schedule, the youngster felt she was overloaded, and now she had an additional burden. So, her homework done, she scribbled out the hundred lines with a pencil. It didn't matter if Otto could read it or not - he knew what it said. The coach took one look at the assignment and said 'Do it again, in pen and ink. He paused and added, 'And neatly!' It was a lesson she never forgot, and a coaching attitude that years later she determined was entirely sound. Scott King said that "a teacher must take it for granted that you respect him, or you would be wasting your time taking advice from him."


In the mid sixties, another Olympic Gold Medallist - Dorothy Hamill - had a warmer experience with the tenured coach who allowed her to lodge with him and his wife. She did recall in her book "A Skating Life: My Story" that in Lake Placid, "the top coaches, about seven of them in total, each had his or her own section in an L-shaped pattern down and across the ice. No one but the student taking a lesson could enter that privileged zone. Not every coach was allotted a patch and some of them shared. I was a very impressed that Otto Gold had his own spot and no one else could ever use it but him."

Otto worked with a who's who of Canadian figure skating through his career as a coach. Among them was none other than Donald Jackson, who under Otto's tutelage won his first senior medal at the Canadian Championships in Galt in 1956. Jackson and Otto parted ways in 1957 when the Czechoslovakian born coach began to devote more and more time to the grooming of his own daughter Frances' career. She was a prodigal young star at the Minto Skating Club and finished sixth while representing Canada at the 1961 North American Championships in Philadelphia. The next year, in the wake of the Sabena crash that wiped out the entire U.S. team, Frances applied for American citizenship and made an attempt at the U.S. title, finishing fourth. Interestingly though, like all of Otto's students, Frances was a wiz at school figures and finished second in that phase of the event at those 1962 U.S. Championships.

However, when asked which of his students was his prize pupil in a January 1962 interview in the Reading Eagle, Otto responded with a smile: "That's easy. Who else but the great Barbara Ann Scott, the pretty Canadian, who became the world's champion in 1947, and has a room full of trophies and medals that attest to her progress." In the same interview, Otto spoke about the mounting popularity of skating in North America, crediting his pupil Barbara Ann as well as Dick Button and Hayes and David Jenkins for generating incredible interest in the sport at the time. He was also asked about judging, to which he responded with a smile, "there are complaints always but I've never found where the winner didn't deserve to win. As long as the judges have open minds, there should be no complaints."

Later in life, Otto was predeceased by his wife and moved back from Bell Island in Norwalk where he had resided for some years to Willowdale, Ontario. He passed away in Scarborough Hospital on April 6, 1977 from injuries sustained in a tragic fire, leaving behind his daughter Frances Gold Lind and two grandchildren, and was interred in Spring Grove Cemetery in Fairfield County, Connecticut. He may have been a tough cookie as far as coaches go, but Otto was responsible for helping some of the sport's biggest stars along in their pursuits for excellence and I don't know about you, but he certainly earns my respect.

Skate Guard is a blog dedicated to preserving the rich, colourful and fascinating history of figure skating. Over ten years, the blog has featured over a thousand free articles covering all aspects of the sport's history, as well as four compelling in-depth features. To read the latest articles, follow the blog on Facebook, Twitter, Pinterest and YouTube. If you enjoy Skate Guard, please show your support for this archive by ordering a copy of the figure skating reference books "The Almanac of Canadian Figure Skating", "Technical Merit: A History of Figure Skating Jumps" and "A Bibliography of Figure Skating": https://skateguard1.blogspot.com/p/buy-book.html.
Posted by Skate Guard Blog at January 10, 2016
Email ThisBlogThis!Share to TwitterShare to FacebookShare to Pinterest
Newer Post Older Post Home