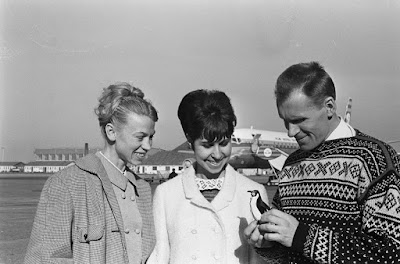 From March 2 to 7, 1965, the Broadmoor Palace played host to the first World Championships on North American soil since the 1961 Sabena tragedy that claimed the lives of the entire U.S. World team. Incredibly - just four years after the catastrophe - American skaters rose to the occasion, repeating their 1959 achievement of having a medallist in all four disciplines at Worlds. Full of fascinating figures, the 1965 World Championships from start to finish were full of memorable moments. Pour yourself a cup of tea and prepare yourself for a trip down memory lane! 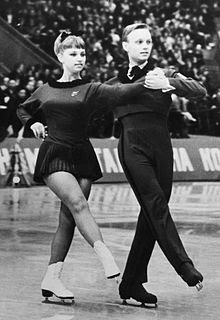 The ice dance event got off to a rocky start in the compulsories. In her book "Figure Skating History: The Evolution Of Dance On The Ice", Lynn Copley-Graves noted that "the Rocker Foxtrot and Westminster Waltz dragged on for nearly three hours, with lengthy conferences between judges and referees. Judges marched on and off the ice after each dance because they could not sit on the ice, as was custom, in the narrow (85 X 90 feet) rink. One conference concerned marks ranging from 3.0 (Mme. Lysiane Lauret) to 5.4 (Margaret Ridgely) for a Canadian couple. The next night all returned to skate the Blues and Kilian..." In the end, Czechoslovakian siblings Eva Romanová and Pavel Roman retained their lead after the compulsories, winning the free dance and the World title. Having won the previous three years, their win was largely expected. Copley-Graves recorded that "no couple could hope to oust Pavel and Roman in the free dance... With amazing cohesion in their free leg movements, Eva and Pavel amassed a fourth consecutive World title. They did not skate in the exaggerated straight-back position of the British, with the result that came across as more fluid. Their innovative free dance energized the audience." The British team Copley-Graves referred to were none other than Janet Sawbridge and David Hickinbottom, who I bet got teased a lot in school. North American Champions Lorna Dyer and John Carrell, students of World Champion Jean Westwood, claimed the bronze ahead of Diane Towler and Bernard Ford, who made an unprecedented leap in the ice dance standings from fifth in the compulsories to second in their free dance, which received an ovation. In fifth were another team coached by Westwood, American Champions Kristin Fortune and Dennis Sveum. Canada's top ice dance team that year was Carole Forrest of the Upper Canada Skating Club and Kevin Lethbridge of the Lakeshore Figure Skating Club, in eighth.


Prior to the pairs event, Frank Hokomo (the head of the USFSA's Judging Committee) was busy talking smack about the competition to reporters. He said that "the Russian pairs are not good skaters by themselves. I realize this is heresy, but I believe any of the top American pairs are better skaters. The difference is that the Russians have more speed, more unison and better ballet precision. But our pairs can do more difficult moves in two minutes than the Russians can do in five." 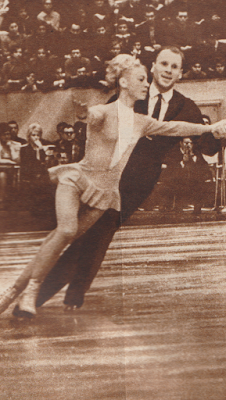 Despite his criticism, the reigning Olympic Gold Medallists, twenty nine year old Ludmila Belousova and thirty two year old Oleg Protopopov made history at the 1965 World Championships, winning the Soviet Union's first World title in any discipline with ease. Siblings Vivian and Ronald Joseph, representing the Broadmoor Skating Club on home ice, settled for silver. The bronze in the pairs event that year went to another Soviet pair, Tatiana Zhuk and Alexander Gorelik, students of the notorious Stanislav Zhuk. Neither of Canada's teams were able to make the top ten.


Tides would change for the Canadian team in the women's event. Eighteen year old Petra Burka of Toronto breezed in and took a very solid lead in the school figures over her chief rival, twenty one year old European Champion Regine Heitzer of Austria. In third and fourth places after the figures were two young American skaters, sixteen year old Peggy Fleming of Pasadena, California and seventeen year old Christine Haigler of Colorado Springs, who was recently injured at the time. Though Peggy was from California, she trained alongside Christine at the Broadmoor under Carlo Fassi. 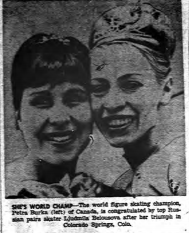 When it came time for free skating, Petra Burka wasn't perfect but she was absolutely exciting. Despite a fall on a double flip, she was the unanimous choice of all nine judges. Her marks all ranged from 5.7 to 5.9 and the top four after the figures remained in their same positions. The March 5, 1965 edition of the Montreal Gazette wrote that "the Canadian star, wearing an emerald-green costume with a green ribbon in her high-piled black hair, rolled a beautiful double lutz and a double axel and excellent height into her spirited performance. Miss Heitzer was expected to give the Canadian girl a strong battle for the title, but her free skating was not up to the standard of Petra's." On the same day, the Jamestown Post-Journal too sang Burka's praises: "Miss Burka had been rated before her victory as the best feminine figure skater in the world, and she put italics to that judgment with her bravura performance. Some experts who watched her said it was one of the most difficult programs of free skating ever attempted by any amateur skater."


However, the men's competition at the Broadmoor in 1965 had to be the most hotly contested. Of the twenty men competing, all but SIX would win a medal at the Olympic, World, European or North American Championships at some point in their career. Think about that for a minute!

Twenty four year old pre-medical student at the University Of Paris Alain Calmat, in his eleventh World Championships the oldest competitor, took a strong lead with 1135.2 points and 15.5 ordinals in the school figures. In second with 1112.2 points was Dundas, Ontario's Donald Knight, a lanky seventeen year old redheaded student of Sheldon Galbraith. Third was twenty year old European Champion Emmerich Danzer of Austria with 1110.8 points and in fourth was sixteen year old Scotty Allen of Smoke Rise, New Jersey with 1102.3 points. Taking himself out of the running for a medal was North American Champion Gary Visconti, who finished a disappointing ninth heading into the free skate. In a press conference after the figures, Danzer confidently said  "It should be a hard fight. I am a good free skater. So is Calmat. But I feel sure I will do well." Calmat stated, "I feel quite confident although you never know what might happen in any free-skating performance. You can always fall."


With so many great skaters in contention for medals, a showdown was brewing. There were many surprises. The March 8, 1965 edition of the Toledo Blade noted that twenty three year old Japanese skater "[Nobuo] Sato drew a thunderous ovation from the crowd for an enthusiastic display of bladework, during which he recovered smiling from a fall at one corner of the rink." Visconti delivered a fine free skate to move up to sixth while Danzer faltered, falling on one jump and stepping out of another. If any skater stole the show, however, it was Scotty Allen, who moved up from fourth to take the silver ahead of Knight. Calmat, on the basis of his strong lead in the figures, won his first and only World title. Interviewed in the March 6, 1965 edition of the Gettysburg Times, Knight said, "I skated my best. I did as well as I possibly could. I'm very happy. I feel very proud to have done as well as this after finishing ninth last year. My goal when I came out here was to try to finish among the top five." 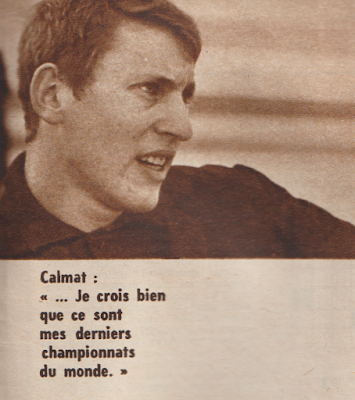 Alain Calmat, proud of his performance, chose to announce his retirement: "I think now I will quit. I may change my mind later but I've been skating in these championships since I was 14 and now that I've won it, it would be a good time to stop." He was probably right to do so. Over the next two Olympic cycles, his fellow 1965 Worlds competitors like Danzer, Wolfgang Schwarz, Ondrej Nepela, Tim Wood, Sergei Chetverukhin and Patrick Péra would utterly dominate men's figure skating. Sometimes you've get out to get out while the gettin's good, as they say in some twangy country song I'd rather not hear.

Skate Guard is a blog dedicated to preserving the rich, colourful and fascinating history of figure skating and archives hundreds of compelling features and interviews in a searchable format for readers worldwide. Though there never has been nor will there be a charge for access to these resources, you taking the time to 'like' on the blog's Facebook page at http://www.facebook.com/SkateGuard would be so very much appreciated. Already 'liking'? Consider sharing this feature for others via social media. It would make all the difference in the blog reaching a wider audience. Have a question or comment regarding anything you have read here or have a suggestion for a topic related to figure skating history you would like to see covered? I'd love to hear from you! Learn the many ways you can reach out at http://skateguard1.blogspot.ca/p/contact.html.
Posted by Skate Guard Blog at March 30, 2016
Email ThisBlogThis!Share to TwitterShare to FacebookShare to Pinterest
Newer Post Older Post Home