At the 2016 World Figure Skating Championships in Boston, Meagan Duhamel and Eric Radford brought the audience to their feet with their brilliant "Hometown Glory" free skate on their way to their second consecutive World title. With side-by-side triple Lutzes and a throw triple Lutz, a throw quadruple Salchow, high flying triple twist and a challenging side-by-side triple toe/double toe/double toe combination, they pushed the boundaries of what pairs skaters can achieve on the frozen stage. It was without a doubt one of the difficult and daring displays on ice in recent memory.

After watching a performance like Meagan and Eric's, it's incredible to think how far the discipline pairs skating has come since the days of Madge and Edgar Syers and The Brunet's. Many trailblazing teams have paved the way for today's duos but unfortunately, the stories of some have been unfairly forgotten. Today's blog highlights several pioneering professional pairs teams that you may never have heard of: eight unsung skating heroes who each in their own way made important contributions to the discipline. 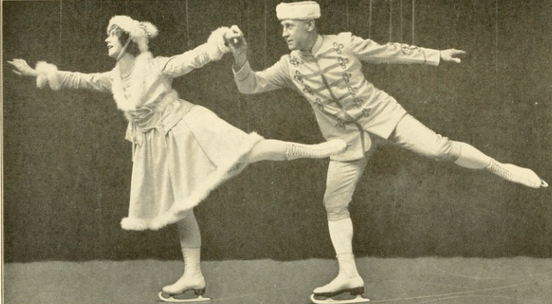 By 1915, figure skating was fast becoming a socially acceptable and popular pursuit amongst New York City's high society. At the St. Nicholas Rink, amateur and professional skaters alike rubbed elbows with the rich and famous. Names like Mr. and Mrs. Cornelius Vanderbilt, Mr. and Mrs. Edwin Gould, tennis champion Edith Rotch and Mrs. John Jacob Astor all frequented the rink at one point or another. Cathleen Pope and George Kerner, a professional pairs team, too regularly skated at the rink. This athletic duo performed alongside Charlotte Oelschlägel in the ice ballet that was part of the "Hip, Hip Hooray!" variety show at The Hippodrome as well as in "The Big Show" which gave four hundred and twenty five performances in around half a year. They also took the stage at the College Inn at the Hotel Sherman in Chicago. Pope and Kerner were particularly known as one of the earliest teams to introduce more athletic, adagio style lifts to their pairs programs. James A. Cruikshank mentions the two in his 1921 book "Figure Skating For Women", noting their use of waltzing for dramatic effect in their choreography: "Amerikaner Waltz, is a fine figure for pair-skating and capable of many developments. Its success in the beautiful numbers skated by George Kerner and Cathleen Pope in the New York Hippodrome taught many American skaters that they had been neglecting a very interesting and comparatively easy number." 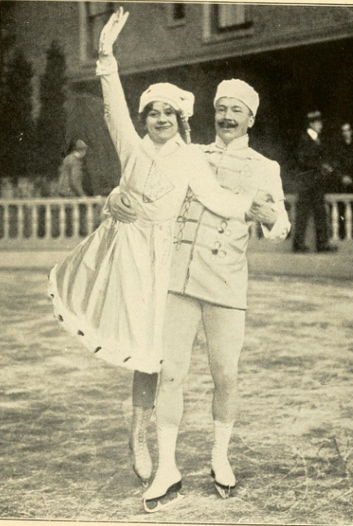 The son of an army sargeant, Norwegian born Alfred Naess earned his stripes not as a figure skater but as a speed skater. He won both the Norwegian and European all-around speed skating titles in the 1890's and during his tenure in the sport set three world records and won two five hundred meter races at the World Championships. After retiring from speed skating, he teamed up with an Austrian skater named Freda Maier-Westorgaard and they performed vaudeville style acts as a professional pairs team in Europe. In 1913, he arrived in America. Within a year, he and wife Sigrid were performing as a figure skating pair alongside Will Phillips in "The Elopers", a vaudeville stage production in Chicago. Ice was made in June especially to incorporate the pair's theatre performance. Alfred Naess' particular skill as a figure skater was noted in the St. John Daily Sun on March 10, 1897: "Mr. Naess is beyond all question the finest fancy skater ever seen in this part of the country." The married pair continued performing in shows in America but both returned to her native Austria later in life, where the pair died in almost perfect unison within a year of each other in the fifties. 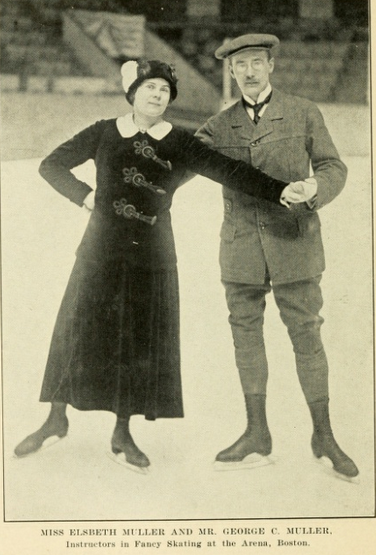 Susan Brownell's wonderfully detailed "Figure Skating in St. Louis – After 90 years, 'Meet Me in St. Louis'" offers a fantastic primer on the history of this professional pairs team and coaching duo, who really fall under the category of ice dance pioneers more than pairs pioneers but as the lines were blurry back in those days, I think it's fair to include them. Brownell states "The club invited the professional George Muller and his sister Elsbeth to visit during the skating seasons from 1917-1919. George was a Berliner who had performed before heads of state in Sweden and Canada, while his sister Elsbeth had been a pioneer in introducing 'fancy skating' to German women. In 1912 Muller had been invited by the Boston Skating Club to introduce the international style of figure skating in America. He was affiliated with several American clubs and is today remembered as the inventor of the Dutch Waltz, Fiesta Tango, Willow Waltz, and Ten Fox dances." Now I've got that dreadful Dutch Waltz music stuck in my head again! Thanks a lot, George! This pair performed in carnivals in the clubs they taught at and also found success as the inventors of literally dozens of pattern dances for roller skaters such as the Adora Fox Trot, Aeroplane Dance, Berliner Waltz and Carnival Tango. The St. Louis Skating Club flourished under their presence much as young skaters testing their preliminary dances do when swing rolling their way to a pass. 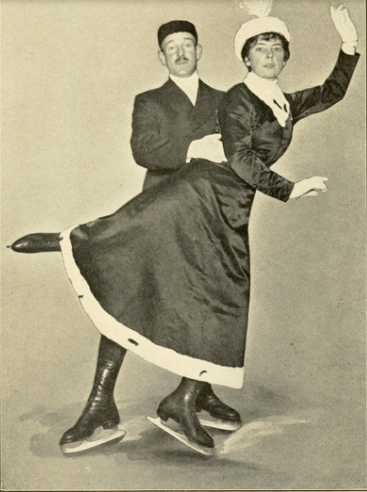 Immigrants from Sweden who arrived at Ellis Island prior to World War I, this brother/sister team might have matched beautifully on the ice but there was certainly quite the age gap going on. Bror was nineteen years Emmy's senior but that didn't stop them from spending some quality sibling time on the ice together dazzling crowds. I always have a soft spot for brothers and sisters who skate together because my sister and I both spent so many years growing up on the ice together so this team's story really spoke to me, being the big brother myself. Bror was an accomplished singles skater who beat Olympic Silver and Bronze Medallists Richard Johansson and Per Thorén to win the 1906 Swedish men's title in younger years and finished third at that year's World Championships in Munich. 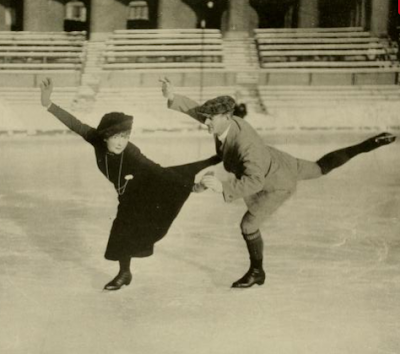 His sister hadn't enjoyed the same success as a competitive skater but when they came together as a professional pair it was magic. The pair performed shows in New York City at Madison Square Garden to appreciative audiences and Meyer even penned a book called "Skating With Bror Meyer". He was a staunch advocate for professional competitions, as evidenced in this quote from The New York Times: "Bror Meyer, the professional figure skater, made a plea for professional competition recently at the St. Nicholas Ice Rink. Mr. Meyer contended that standards in skating would be bettered if there were such contests." I couldn't agree with him more and only wish Bror and Emmy would have had the opportunity. Sadly, Bror passed away on May 26, 1956.

Skate Guard is a blog dedicated to preserving the rich, colourful and fascinating history of figure skating and archives hundreds of compelling features and interviews in a searchable format for readers worldwide. Though there never has been nor will there be a charge for access to these resources, you taking the time to 'like' on the blog's Facebook page at http://www.facebook.com/SkateGuard would be so very much appreciated. Already 'liking'? Consider sharing this feature for others via social media. It would make all the difference in the blog reaching a wider audience. Have a question or comment regarding anything you have read here or have a suggestion for a topic related to figure skating history you would like to see covered? I'd love to hear from you! Learn the many ways you can reach out at http://skateguard1.blogspot.ca/p/contact.html.
Posted by Skate Guard Blog at April 05, 2016
Email ThisBlogThis!Share to TwitterShare to FacebookShare to Pinterest
Newer Post Older Post Home