Revisiting The Royals: Skating With The British Monarchs 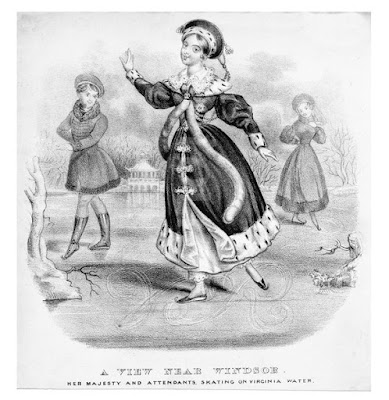 Without question, the British Royal Family has long been the subject of endless fascination and admiration around the world. Back in August 2013, we investigated the story of "The Royal Skating Mishap That Could Have Changed History" and looked at Prince Albert's skating accident and Queen Victoria's connection to ice skating. The fact of the matter is, England's royals have long had historical connections to the ice and today on the blog, we will explore some of these fascinating stories.

Let's begin by going way back to the seventeenth century and looking at how James Scott, the first Duke Of Monmouth, came to introduce English skaters to the Dutch Roll. Elsie Weirich Reighard's column "The Ice Patch" in the December 14, 1971 edition of the Observer-Reporter noted, "recalling the political history of 1653, we find the royal Stuarts from Scotland still exiled in Holland. While there, the Duke of Monmouth taught English contra (country) dances to the Dutch court ladies. In return, they taught him to execute the 'outside and inside edge.' He skated with the Princess of Orange who tucked up her cumbersome long skirts for easier footwork. Horrors! She showed her knees! These wealthy youngsters were darlings of the 17th century jet set, so no eyebrows were raised. Meanwhile in England, the Lord Protector, Richard Cromwell, was making a mess of things. The Scottish army marched in, overthrew the government, and restored the Stuarts as rulers of England. Returning from Holland, the Stuarts brought two novelties - iron-bladed skates and the 'Dutch Roll' (the natural method of stroking we use today). Introduced in 1662, this new recreation spread like wildfire."

Henry Eugene Vandervell, pioneer of the English Style of figure skating, noted in his 1869 book that "The Skating Club has been more than once honoured by an invitation for a limited number of its members to skate in the presence of the Royal Family. On the first occasion the invitation was to the water in the rear of Buckingham Palace. A thaw suddenly set in, which sadly disappointed the members, no skating being possible. On the next occasion the invitation was to Virginia Water, and seventeen of the members of the Club, including one of the writers, went there. This was during the life of the late lamented Prince Consort. A sudden thaw again set in, and the Royal Family consequently did not attend, but sent General Seymour to receive the members. It is pleasant to record his courtesy on the occasion. A little skating was carried out, but the thaw was fatal to the complete enjoyment of the expedition."

In December of 1874, Queen Victoria's son Prince Albert Edward caused a stir in Paris, France when he crashed a figure skating practice of the Club de Cercle de Patineurs and proceed to go pigeon shooting on the ice while the men skated their figures. The Public Ledger reported on December 1 of that year that, "making all due allowance for court etiquette, and the fact of the game being beaten up to a particular spot, everyone admits the prince is more than an average good marksman, and the French sporting men do not hesitate to express an opinion that he would hold his own against the best of them, among the pigeons at the Cercle, if he could only be prevailed upon to spend a day there previous to his departure."

In March 1878, Queen Victoria's fourth daughter, Princess Louise, celebrated her birthday with a fancy dress skating party at Victoria Rink in Montreal. The March 19, 1879 edition of The Montreal Daily Witness described the masquerade thusly: "At eight o'clock the band of the Victoria Rifles struck up, and shortly after the doors of the dressing-rooms were thrown open, and out poured the masqueraders in a continuous stream until the whole glacial surface was alive with the most motley crowd imaginable. The many gas-lights overhead caused the moving figures to be reflected in the mirror of ice, until by the gradual cutting up of its surface deep shadows took the places of the inverted skaters." Costumes included Old Mother Hubbard, Little Red Riding Hood, Elephant, Fairy King and Clown. Even Louis Rubenstein appeared dressed as a rag-picker from Paris. 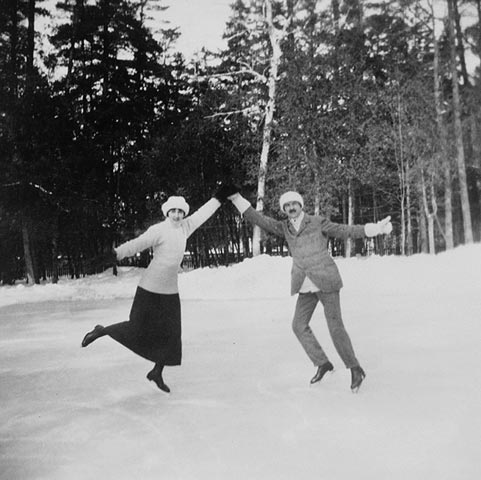 For a twentieth century account of the British monarchy's role in skating history, we can easily turn to Howard Bass' wonderful 1960 "Winter Sports" book: "The Duke of Windsor recounts in his memoirs how, when the life of his father, King George V, was slowly ebbing away, Princess Mary was summoned to the King's bedside. A sharp frost during the night had frozen the pond outside and, as he roused himself, the King asked his daughter whether she had been skating. The Duke writes: 'My father's mind must have been travelling far back into the past and the wonderful skating parties that he and the rest of us had had there when we were young. Then he dozed off again.' The thought that the pleasant picture of a happy skating party may have been paramount in the King's mind just before he passed away must appeal to all devotees of the rink. It would seem that the British royal family have enjoyed many such 'wonderful skating parties' on the frozen lakes at the royal residences, particularly at Sandringham. When Prince of Wales, the Duke of Windsor frequently skated at the old Westminster Ice Rink with his brother, King George VI, the Duke of York. Queen Elizabeth, when a child, skated at the rink formerly at Grosvenor House, and her sister, Princess Margaret, has skated at Queen's Ice Club, Bayswater. Both Princess Charles and Princess Anne have taken lessons at Richmond Ice Rink." Prince Andrew, Duke Of York, learned to skate at the age of seven, eventually playing hockey at Lakefield.

Perhaps my favourite of any the British Royal Family skating stories I have encountered is that of Sonja Henie meeting Queen Mary, Mary of Teck, the Princess Consort to King George V. This humorous account, retold from her autobiography in Bass' book, serves as a delightful ending to a look at a centuries old love affair between skating and the British monarchy: "Mention of royalty and skating recalls to mind an amusing episode which Sonja Henie described as 'the worst faux pas of my career' when, in 1928, as a very little girl, she was presented to Queen Mary and responded to the Queen's disarming expression of interest in the sport with a suggestion that Her Majesty might take up roller skating, as it might be less hazardous. The ageing Queen broke the pause which followed to say: 'I will think about what you have said.'"

Skate Guard is a blog dedicated to preserving the rich, colourful and fascinating history of figure skating and archives hundreds of compelling features and interviews in a searchable format for readers worldwide. Though there never has been nor will there be a charge for access to these resources, you taking the time to 'like' on the blog's Facebook page at http://www.facebook.com/SkateGuard would be so very much appreciated. Already 'liking'? Consider sharing this feature for others via social media. It would make all the difference in the blog reaching a wider audience. Have a question or comment regarding anything you have read here or have a suggestion for a topic related to figure skating history you would like to see covered? I'd love to hear from you! Learn the many ways you can reach out at http://skateguard1.blogspot.ca/p/contact.html.
Posted by Skate Guard Blog at June 02, 2016
Email ThisBlogThis!Share to TwitterShare to FacebookShare to Pinterest
Newer Post Older Post Home