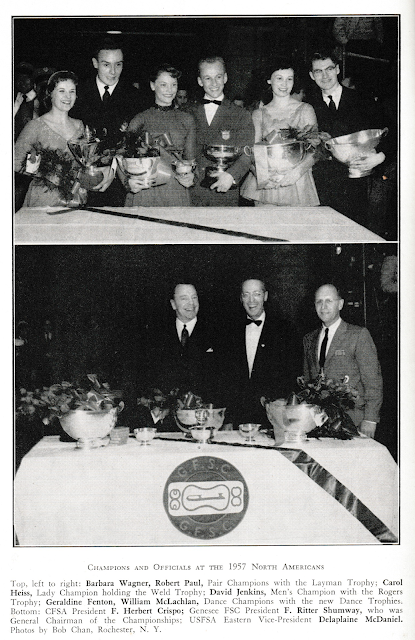 Hosted by the Genesee Figure Skating Club, the North American Championships in Rochester, New York on February 9 and 10, 1957 were so well attended that potential spectators were actually being turned away at the doors. Seven thousand, two hundred and fifty skating aficionados from both north and south of the border packed the city's War Memorial Arena for the free skating events with bated breath, anxious to see who would take home brand spanking new trophies donated by F. Ritter Shumway and the Rochester Institute Of Technology. In the end, Canada and the United States ended up in a stalemate, with gold medals in two disciplines each. Who was victorious? Who fell short? Let's take a look at how it all played out! 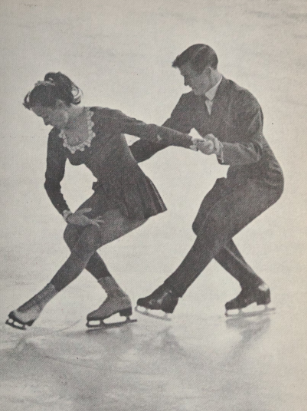 "These kids have worked hard for this one and I'm pulling for them to come through," said Maribel Vinson Owen of the international debut of her students Nancy Rouillard and Ron Ludington. However, the 1957 North American Championships were one battle even the unstoppable Maribel couldn't win. Canadians Barbara Wagner and Robert Paul and Maria and Otto Jelinek claimed the top two spots in the pairs event in Rochester, a testament to the utter dominance of Canadian pairs teams in the fifties. Wagner and Paul went on to win the Canadian and World titles in spectacular fashion... all within sixteen days. Their winning program was set to the ballads "Love Letters", "Amor" and "Kalman Memories". In his April 2010 interview with Allison Manley on The Manleywoman SkateCast, Paul recalled their training during that period: "We were, I say, trained like machines. Sheldon [Galbraith] would bring out the stopwatch, and we could go through that program without the music and end up within a half-second of when the music was there. And our music was on 78s, and every rink had a variable speed on its record player, so they could get it exact. I don't think that happens with CDs today."

Three judges (two Canadian and one American) had Wagner and Paul first, while two American judges voted for the Jelinek's and Rouillard and Ludington. Mary Kay and Richard Keller of the Buffalo Skating Club finished fourth. Emily Van Voorhis recalled, "The smooth, perfect rhythm of [Wagner and Paul's] simultaneous movement was thrilling to watch. Skaters of equal ability, they exhibited shadow skating at its best. Their identical separation moves were highlighted by an exquisite knee catch, reminiscent of of the stag jump in free skating, and by Barbara's beautiful lifts which always ended on sure, soft knee." After their performance, an elderly woman came up to Wagner and Paul with tears in her eyes, exclaiming that it was the first time in forty years she'd seen 'the palace glide'.

On January 20, 1957 - Carol Heiss' seventeenth birthday - Tenley Albright dropped a huge bombshell. In a telegram to the United States Figure Skating Association, she announced her retirement. Up until that week, she'd been training six hours a day for the North American Championships. Suddenly Heiss, who had unseated Albright at the previous year's World Championships in Garmisch-Partenkirchen, found herself with a hell of a lot less competition to worry about in Rochester. The blonde and athletic student of Pierre Brunet from Ozone Park, New York, dressed in red with a sequin crown, skated brilliantly to take the gold in a unanimous decision of all five judges. 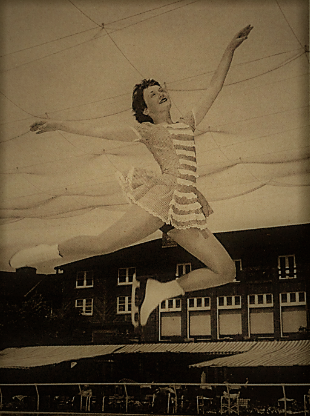 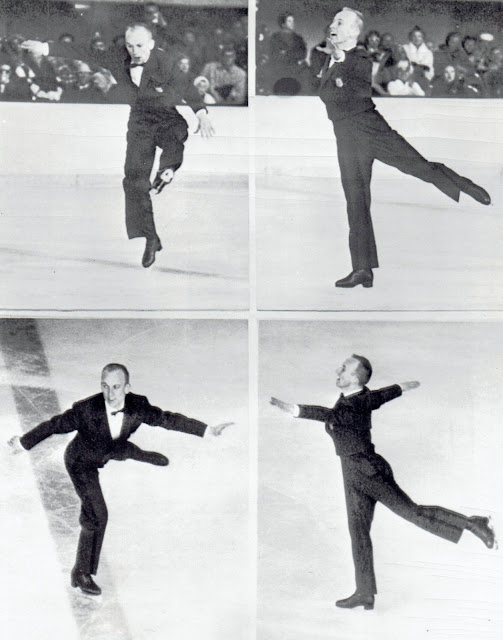 At the 1956 World Championships in Garmisch-Partenkirchen, Colorado Springs' David Jenkins had won the bronze medal. Right behind him in fourth was Toronto's Charles Snelling. They both had to be shaking their heads in disbelief when young Donald Jackson, who hadn't even competed at the previous year's Worlds, won the first school figure in Rochester. His beginner's luck ran out quickly when he blew the next three. Seventeen year old Snelling gave Jenkins a run for his money in the remaining figures but in the free skating, Jenkins utterly dominated. Performing a clean triple loop, double Axels and dizzying spins, he was the unanimous choice of all five judges. Hayes Alan Jenkins took a break from Harvard Law School to cheer his younger brother on. He praised him profusely: "I have thought Dave always was a better free skater than I... I thought his freestyle exhibition was magnificent. He is the only man now skating who can do the triple loop." American Tim Brown claimed the bronze over Jackson, who had an uncharacteristically disastrous free skate and finished fourth. Tom Moore of Seattle finished fifth. In his 1977 Jackson biography "King Of Blades", George Gross noted, "When Don had returned to Ottawa in the fall, he and Otto [Gold] had decided to put together a completely new skating programme. They had only a couple of months to prepare it for competition. Don skated well during the early stages of the five minute routine but took a fall at the half way mark. He was back on his feet in a flash continuing his performance. Yet, his desire was not enough to overcome his inexperience with the programme. He fell three times in the final minute." 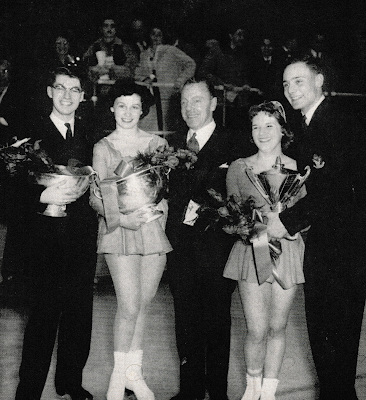 With three teams from Canada and three from the United States, the ice dance competition seemed doomed for a gridlock from the get-go. All six teams powered their way through four gruelling rounds of compulsories (the Rocker Foxtrot, Westminster Waltz, Quickstep and Argentine Tango) and a free dance. Geraldine Fenton and Bill McLachlan were ranked only second in Canada at the time as the North American Championships in 1957 were held prior to the Canadian Championships. The Torontonians pulled off a major upset in Rochester, defeating U.S. Champions Joan Zamboni and Roland Junso. In winning, Fenton and McLachlan made history as the first Canadian ice dance team in history to claim the North American title, ending a ten year streak where Americans dominated the event. Emily Van Voorhis, describing the couple's winning free dance in the April 1957 issue of "Skating" magazine noted, "Their rich fluidity created by a soft knee bend and lovely lean lent a smoothness and flow which radiated from the couple's rhythm and lightness." In her book "Figure Skating History: The Evolution Of Dance On Ice", Lynn Copley-Graves noted that the "competition was so close among the top three that the winning couple could not be determined by a majority of ordinals. The lowest ordinal total was used in the final decision." Another Canadian team, Sharon McKenzie and Bert Wright, actually won the free dance with two first place ordinals, but finished third overall, hampered by a collision in the boards during the Rocker Foxtrot. Toronto's Beverley Orr and Hugh Smith, penalized for performing pair moves in their free dance finished in last place behind Canadians Lindis and Jeffrey Johnston and Americans Carmel and Ed Bodel.

Off the ice, the social calendar in Rochester couldn't have been fuller. There was an ice dance session in the Ritter-Clark Memorial Building rink where the figures were contested, a cocktail party for out-of-towners, a dinner with F. Ritter Shumway and his wife, a buffet luncheon and a dinner-dance at the host Manger-Rochester Hotel that was so packed that the tables extended out into the lobby. Dr. Sidney Soanes and Minerva Burke, representing the CFSA and USFSA Dance Committees, also hosted an informal discussion on the differences of the test structure in Canadian and American ice dance.

Skate Guard is a blog dedicated to preserving the rich, colourful and fascinating history of figure skating and archives hundreds of compelling features and interviews in a searchable format for readers worldwide. Though there never has been nor will there be a charge for access to these resources, you taking the time to 'like' on the blog's Facebook page at http://www.facebook.com/SkateGuard would be so very much appreciated. Already 'liking'? Consider sharing this feature for others via social media. It would make all the difference in the blog reaching a wider audience. Have a question or comment regarding anything you have read here or have a suggestion for a topic related to figure skating history you would like to see covered? I'd love to hear from you! Learn the many ways you can reach out at http://skateguard1.blogspot.ca/p/contact.html.
Posted by Skate Guard Blog at July 21, 2016
Email ThisBlogThis!Share to TwitterShare to FacebookShare to Pinterest
Newer Post Older Post Home