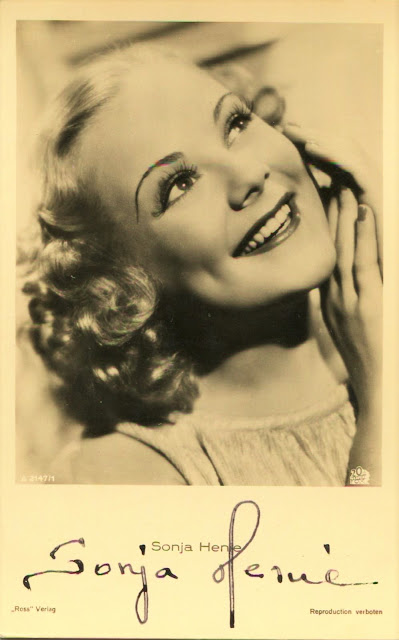 They say that sometimes wealth can be a curse and no one knew that better than three time Olympic Gold Medallist and ten time World Champion Sonja Henie. As savvy a businessperson as she was a sensational skater, Sonja lived a life of luxury after turning professional in 1936. Dressed to the nines both on and off the ice, she had champagne taste and the budget to back it up. Unfortunately, when you're dolled up in furs and dripping in diamonds, you put a bit of a target on your back and what many don't know is that the well-to-do skating queen was a persistent target of thieves.

On Boxing Day, 1944, Sonja's summer beach home in the Hamptons was broken into. The Norwegian ice queen wasn't home at the time but a number of her personal effects were stolen. The break and enter and theft was investigated by Trooper Roche of the New York State Police and cooperating with Henry Resling and Kenneth Hoffman of New York State Police and the U.S. Coast Guard's Intelligence Service, the two culprits were apprehended only two days later. They both turned out to be members of the U.S. Coast Guard. Their names were never released to the media by police and they were dealt with by the Coast Guard. This would be prove to be only the first in a string of increasingly unnerving robberies that Sonja would face.

At around one thirty in the morning on January 28, 1949, Sonja was at Madison Square Garden in New York City, winding down after a standing room only show. Meanwhile at her apartment suite at the Hotel Pierre, her mother awoke to discover that Sonja's adjoining suite had been burglarized. She contacted local police and the case was turned over to Detective John Conlan at East 51st Street police station. Upon her return to the hotel, Sonja reported that two fur coats valued at thirty eight thousand dollars were stolen. She estimated the value of her platina mink at twenty eight thousand dollars and her wild ranch mink at ten thousand. Curiously, the thieves didn't touch her jewelry. The January 28, 1949 issue of the "Long Island-Star-Journal" reported, "Police said they had not determined how the burglars had entered the hotel suite. There was no evidence of forced entry. They expressed surprise that two fur coats could be carried through the corridor and lobby of the swank hotel without arousing suspicion." Society page columnist Alice Hughes hypothesized that it was an inside job. Walter Winchell snarked in his February 7, 1949 gossip column that Sonja was seen dining at Howie's "in last year's Ermine." How uncivilized, right?

Less than six months later on June 6, 1949, Sonja got robbed again. A truck en route from her midtown hotel suite to an air freight terminal was filled with luggage she was having shipped to California. When the truck stopped at a traffic light, it was held up and broken into. The thieves made off with three suitcases, which reportedly contained a few sables, a scarf, a stole and several gowns.

Fed up of being targeted at this point, Sonja decided to start fighting back. In his May 23, 1952 "Earl Wilson's Broadway" column, Harvey Earl Wilson wrote, "Once in Hollywood, Sonja knew in advance that she was to be robbed at a given hour. She (and police with shotguns) waited for the robbers, who didn't arrive. Sonja had stayed home from a party just to be robbed, and was pretty disgusted with the robbers for not coming. 'Next time I hope the robbers will be more dependable people,' she said. Her movie makeup man, who was picking her up the morning after the robbery that wasn't, almost got killed by the police whom Sonja'd forgotten to tell about him."

If that story wasn't dramatic enough for you, wait until you hear about the final time the thieves went after her! On June 6, 1953, Sonja awoke in her Eaton Square apartment in London, England around 4:30 AM to find a young man staring at her from the foot of her bed. She screamed bloody murder, hopped up and threw on a black robe - and with a Henie "heeeeell, no" one presumes - proceeded to chase him down the road in her bare feet. Her cook joined her in her pursuit all the way to the square, but the two women lost their assailants, ran back to Sonja's apartment, locked the doors and called the bobbies. Quoted in the June 6, 1953 issue of the "Spokane Daily Chronicle", Sonja admitted, "It happened so fast I didn't know what I was doing. I was so stunned." The thieves got her good this time, too. The most valuable item taken was an Aleutian mink coat worth sixteen thousand, eight hundred dollars. They also walked away with a seven thousand dollar ermine coat, a three and a half thousand dollar mink jacket, two gold compacts and some three hundred pounds. London's finest
visited a house in Westminster, where they recovered two of her coats on the grounds. The police believed the thief threw the items over the railings of this house into a basement area when they were fleeing on foot. As an aside, I know it's not nice to make fun of a burglary victim but the idea of Sonja Henie chasing a thief down the road, barefoot in a bath robe is a pretty comical mental picture. I wouldn't have screwed with her, that's for sure!

After this final robbery, the insurance companies had enough of her bad luck and seeming inability to safely stow away valuables in hotel safes. They raised her rates through the roof. In her column in the June 17, 1955 issue of "The Chicago Tribune", Hedda Hopper wrote, "Movie stars don't carry their own packages, so Sonja Henie just walked off the plane leaving her jewel case behind. She came near losing it and not a stone was insured." One has to wonder if Sonja really just wasn't meant to have nice things.

Skate Guard is a blog dedicated to preserving the rich, colourful and fascinating history of figure skating and archives hundreds of compelling features and interviews in a searchable format for readers worldwide. Though there never has been nor will there be a charge for access to these resources, you taking the time to 'like' on the blog's Facebook page at http://www.facebook.com/SkateGuard would be so very much appreciated. Already 'liking'? Consider sharing this feature for others via social media. It would make all the difference in the blog reaching a wider audience. Have a question or comment regarding anything you have read here or have a suggestion for a topic related to figure skating history you would like to see covered? I'd love to hear from you! Learn the many ways you can reach out at http://skateguard1.blogspot.ca/p/contact.html.
Posted by Skate Guard Blog at September 18, 2016
Email ThisBlogThis!Share to TwitterShare to FacebookShare to Pinterest
Newer Post Older Post Home