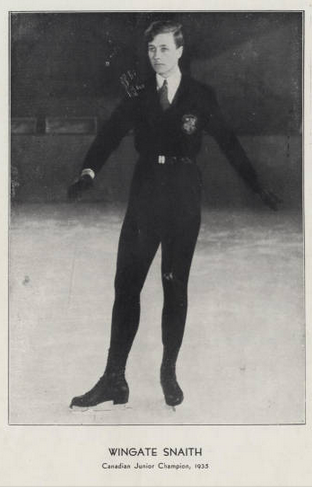 The son of Willoughby and Margeurite Snaith, Wingate Errol William Snaith was born in 1913 in Ottawa, Ontario. He grew up in Sandy Hill and attended the Model School on Elgin Street as a boy, which wasn't far at all from the Minto Skating Club. It was there - on crowded group sessions - that he and sister Shirley got their start on the ice.

At the age of sixteen in 1929, Wingate passed his third class figure test and finished fifth of eight skaters vying for the Wilson Cup at the Minto's annual club competition. By the next year, Snaith won the Sifton Cup and the Minto junior men's title. In 1931, he made his debut in the junior ranks at the Canadian Figure Skating Championships, finishing off the podium. However, he successfully defended his junior men's title at the Minto club competition that year and according to the February 27, 1931 issue of The Ottawa Citizen "skated in a brilliant manner". The newspaper also noted that "his jumps were very well done, particularly the Axel [Paulsen]."

After again just missing the podium in the junior men's event, finishing fourth at the 1932 Canadian Championships, Wingate claimed the Sifton Cup for a third consecutive time in 1932, finishing ahead of Charles Addison and Warwick Steeves. That year, he also won the Wilson Cup and the Soper Cup in junior pairs skating with his sister. The following year, he finished a strong second in the junior men's event at the Canadian Championships in Montreal behind Osborne Colson and representing his school, Lisgar Collegiate, won the Interscholastic Figure Skating Championship at the Minto Club with a strong performance in the school figures. What made Wingate's successes so compelling was the fact that aside from a handful of lessons from Gustave Lussi, he was essentially self-taught.

After another silver medal in 1934 in the junior men's event at the Canadian Championships, in 1935 Wingate finally prevailed in winning the Allan Howard Trophy and becoming Canada's junior men's champion at the age of twenty two in January 1935. His success earned him a ticket to the North American Championships in Montreal. Disappointingly, he finished a distant last place behind Bud Wilson, Robin Lee, James Lester Madden, Roger Turner, George Hill and Guy Owen. It was hardly the kind of senior debut that would inspire most skaters to want to soldier on. 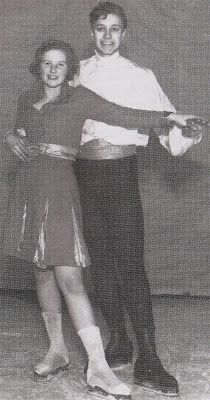 Soldier on he did. The following year, Wingate joined an exclusive club of skaters who passed the Amateur Skating Association Of Canada's Gold test. This was no small feat considering his judges for that test were Norman Gregory, Philip Chrysler and Melville Rogers... all former Canadian Champions. Representing the Minto Skating Club, Wingate would win the silver medal in the senior men's event at the Canadian Championships behind Osborne Colson in both 1936 and 1937. He relocated to the Montreal Winter Club and celebrating this change of scenery and his successes, he rang in 1938 with a New Year's exhibition on Champlain Lake. However, when Osborne Colson stepped away from competitive skating following his 1937 win, Wingate didn't make the natural ascent to the top of the podium. Montgomery Wilson won in 1938 and 1939; Ralph McCreath in 1940. Wingate finished finished third all three years and retired from competition in 1941 at the age of twenty eight. Despite winning seven medals in both the junior and senior ranks at the Canadian Championships and being noted for his speed and athleticism, his name would be relegated to dusty programs from Minto and Montreal Winter Club ice shows.

Perhaps what Wingate did with the rest of his life is what stands out most. During World War II, he joined the Royal Canadian Navy. He rose to the rank of Lieutenant Commander and served with the Halifax Force on the HMCS Ungava, a minesweeper that saw action in both the Battle Of The Atlantic and Battle Of The St. Lawrence. After the war, Wingate attended St. Patrick's College and earned his Bachelor Of Arts degree at the age of fifty four in 1967. He continued to skate in club carnivals and was an active member of the Rideau Lawn Tennis Club and Ottawa Curling Club for many years.

When he passed away in 2008 at the age ninety five in an Ottawa nursing home, Wingate left a massive contribution to the Maxwell MacOdrum library at Carleton University. A September 2009 article from "Carleton Now" states that "after his mother died in 1975, he wanted to do something in memory of his parents. He left money for the Carleton library because he was an alumnus and also because of his belief in the longevity of libraries. 'Libraries are lasting buildings. A library is a place that’s never finished,' [Andrée] Aylan says of Wingate's feelings about libraries." I feel it's only appropriate that his story, which speaks of never giving up at any age, has a place in this little library of figure skating history.

Skate Guard is a blog dedicated to preserving the rich, colourful and fascinating history of figure skating and archives hundreds of compelling features and interviews in a searchable format for readers worldwide. Though there never has been nor will there be a charge for access to these resources, you taking the time to 'like' on the blog's Facebook page at http://www.facebook.com/SkateGuard would be so very much appreciated. Already 'liking'? Consider sharing this feature for others via social media. It would make all the difference in the blog reaching a wider audience. Have a question or comment regarding anything you have read here or have a suggestion for a topic related to figure skating history you would like to see covered? I'd love to hear from you! Learn the many ways you can reach out at http://skateguard1.blogspot.ca/p/contact.html.
Posted by Skate Guard Blog at December 01, 2016
Email ThisBlogThis!Share to TwitterShare to FacebookShare to Pinterest
Newer Post Older Post Home