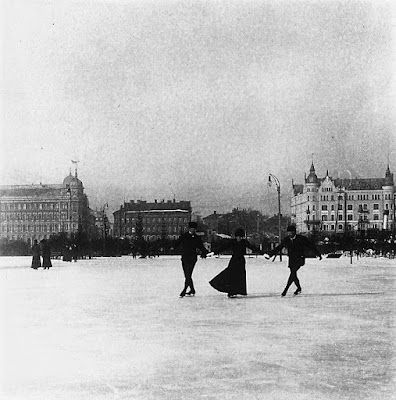 Skaters from the Helsingfors Skridskoklubb on the ice in Helsinki. Photo courtesy Helsinki City Museum.

On January 24 and 25, 1914, many of the best skaters in the world competed in St. Moritz, Switzerland at the Internationale Eislauf-Vereinigung's annual international competitions for women and pairs, later recognized as World Championships. Defeating eight other women, twenty three year old Zsófia Méray-Horváth claimed her third and final World crown.

In the pairs event, German born Ludovika Eilers and her Finnish husband Walter Jakobsson reclaimed the title that had eluded them the previous two years and set the stage for Finnish glory in the men's event which was to be held a month later on Helsinki's frozen North Harbour. That men's competition would mark the very first time in history that Finland ever played host to the World Figure Skating Championships. 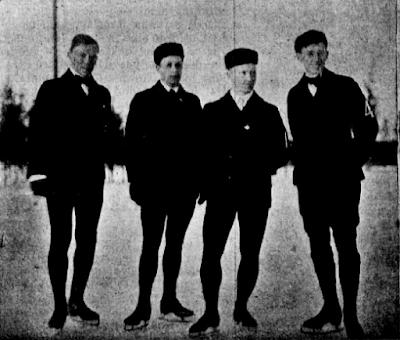 It was a highly talked up event, toted in European newspapers of the era as the biggest showdown in the history of men's figure skating. Not only was it the first time more than ten men participated in the World Championships, but six of the fourteen men entered had previously medalled at either the Winter Olympics, World or European Championships. With Olympic Gold Medallist Ulrich Salchow having at that time stepped aside, it was anybody's game. Although two Swedish judges sat on the panel, if the judging of the event was stacked in favour of any nation's skaters, it was the Russians and Finns. World Champion Walter Jakobsson acted as the Finnish judge and Olympic Gold Medallist Nikolay Panin-Kolomenkin as the Russian one. The referee was Russian and as the event was held in Finland, which was then an autonomous duchy under Russian control. The fifth judge represented Hungary.

Outdoors in Helsinki weather that dipped below minus twenty degrees Celsius, fourteen men started the men's event despite protests from Finnish physicians, who claimed it was simply unsafe to compete in such dangerously low temperatures. However, the sun was shining and at least a thousand spectators braved the bitter cold to come watch the best skaters in the world compete. 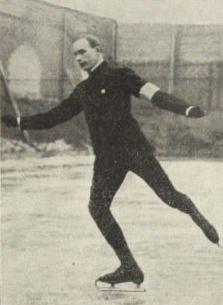 Gösta Sandahl won the free skate by eight points over Austria's Ernst Oppacher, who had been seventh in figures. Böckl was third in free skate, followed by Harald Rooth of Sweden, Malinin and Richard Johansson, Szende and Grafström. Kachler placed a disastrous ninth and Swedish judge Dr. Bardy had him in a tie for tenth with Szende.

Although ranked sixth overall by Panin-Kolomenkin, Gösta Sandahl won his first and only World title with first place ordinals from both Swedish judges and Jakobsson. Kachler, still ranked first by the judge from Austria-Hungary, settled for silver ahead of Böckl, Oppacher, Szende, Malinin, Grafström, Rooth and Johansson. Interestingly, 1912 European Bronze Medallist Martin Stixrud of Norway was the only skater who participated who didn't have a judge from his country on the panel. How did that work out for him? He placed eleventh.

So impressive was Sandahl's free skating performance that in the "Neues Wiener Tageblatt" in Vienna, Otto Bohatsch praised him thusly: "The young Swede Sandahl conquered... He's a smart kid of twenty years... a majestic skater with flight and speed in his program not unlike Salchow in younger days... He is considered among the best Nordic skaters today." The only Finnish entry who finished the competition, Björnsson Schauman, finished a disastrous twelfth. His result coupled with Sakari Ilmanen's in the figures proved that even in 1914 with a stacked panel, the judging in Helsinki wasn't overtly biased in favour of the hometown crowd. 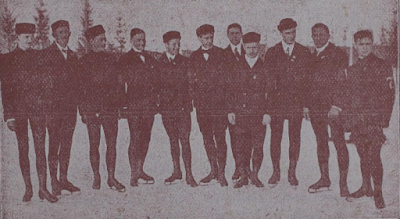 The "Fremdenblatt Sports Journal" saw things differently, claiming that Sandahl was marked generously in the school figures despite his ability being "nowhere near Kachler" and that Scandinavian judges had ganged up against Kachler in the free skate when he had an off day. Swedish skating historian Gunnar Bang, recalling the competition in his 1966 book "Konståkningens 100-åriga historia" noted Kachler's graciousness in defeat, saying that after the event, he "spoke not about the outcome, knowing the best man for the day won." Sandahl and Kachler didn't get a chance to settle their score for nine years. 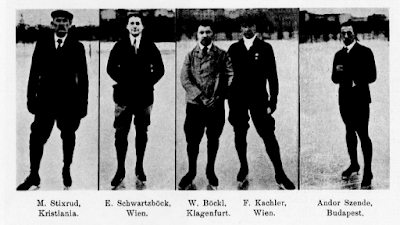 The 1914 World Championships in men's figure skating were the final major international competition held before World War I, which put the amateur figure skating scene in Europe at a standstill. At the 1923 World Championships in Vienna - Kachler's hometown - Scandinavia's Sandahl finished third to Kachler's first, proving that like figure eights, all things come full circle.

Skate Guard is a blog dedicated to preserving the rich, colourful and fascinating history of figure skating and archives hundreds of compelling features and interviews in a searchable format for readers worldwide. Though there never has been nor will there be a charge for access to these resources, you taking the time to 'like' on the blog's Facebook page at http://www.facebook.com/SkateGuard would be so very much appreciated. Already 'liking'? Consider sharing this feature for others via social media. It would make all the difference in the blog reaching a wider audience. Have a question or comment regarding anything you have read here or have a suggestion for a topic related to figure skating history you would like to see covered? I'd love to hear from you! Learn the many ways you can reach out at http://skateguard1.blogspot.ca/p/contact.html.
Posted by Skate Guard Blog at March 24, 2017
Email ThisBlogThis!Share to TwitterShare to FacebookShare to Pinterest
Newer Post Older Post Home
"As a rule an author has one or two popular ways of contrasting the past with the present. He can treat the past as lying in comparative doleful ignorance, or he can explain that the past was infinitely superior to the day we live in. Of course, either method is the popular journalism of the moment, and in reality there is no sharp contrast, but a gradual transition which leads the past into the present." - Joel B. Liberman, Skating Club Of New York