When you dig through skating history, you never know what you will unearth. In the spirit of cataloguing fascinating tales from skating history, #Unearthed is a once a month 'special occasion' on Skate Guard where fascinating writings by others that are of interest to skating history buffs are excavated, dusted off and shared for your reading pleasure. From forgotten fiction to long lost interviews to tales that have never been shared publicly, each #Unearthed is a fascinating journey through time. This month's #Unearthed comes to you from the twenty seventh issue of "Weekend Magazine" in 1965. This content has been reproduced with the permission of the Royal Society of Canada. The original author was the late Constance Mungall and her interview subjects include Mrs. Ellen Burka and Petra Burka. Although some of the sentiments shared may seem dated, I think you'll really enjoy this glimpse of Petra's mindset in the height of her competitive career!

Petra Burka is Canada's new sports sweetheart. She's champion woman skater of the world. She's pretty, and shows a delightful figure and smile as well as dazzling technique on the ice.

It's happened so fast that a few Canadians don't know it yet, and Petra Burka herself hasn't quite caught on. Nevertheless, the Toronto schoolgirl now has the place Barbara Ann Scott and Marilyn Bell filled before they disappeared from public life.

Petra came up fast. She won her three championships last winter, when she was 18. Within a month, from early February to March, she was declared champion in the Canadian trials at Calgary and the North American at Rochester, N.Y. Then, she won the world championship at Colorado Springs.

The people who hang around rinks because they're in the business, or because they love to see good skaters, had spotted Petra in practice before she had entered a competition.

"I saw her when she was 14," said Stafford Smythe, president of Toronto Maple Leafs and Maple Leaf Gardens. "I've seen them all from Sonja Henie down, and Petra's the most talented female skater of them all. You can spot talent at that age, just the same as with a hockey player. The basics are the same."

Sheldon Galbraith, the veteran Toronto skating coach who trained Canadian champions Barbara Wagner, Bob Paul and Don Jackson as well as Barbara Ann Scott, watched Petra skate a year before she won the Canadian junior championship in 1961. She was 13 and had been skating for seven years.

"She was quite small, but a hard worker," said Galbraith. "Already I could see her tremendous strength." He has called Petra the strongest free skater in 20 years of international competition.

Petra is dark and prettier than she looks in photographs. She was born in Amsterdam in 1946, came to Canada with her parents and sister in 1950.

"School figures bore me," she says, though she spends 4 1/2 hours of her seven-hour skating day practicing the endless variations on the figure eight. Her mother is always at the rink, but coaching rather than watching. Ellen Burka, herself women's champion of Holland in 1945-46, is coach at three Toronto skating clubs. She trains other competitive skaters besides Petra. She and her husband Jan, an artist, were divorced and she has raised her daughters Petra and Astra, 16, since 1956.

Size is a factor in the high-speed rotation at which Petra excels. She is only five-feet, 1 1/2 inches, but is big-boned. "She's not a body design that looks as if she can get away with what she does," says coach Sheldon Galbraith. "But she overcomes resistance with tremendous physical strength."

Off the ice, Petra seems shy. She has nothing to say to reporters trying to catch a quick interview. But in a longer interview, combined with leaping and spinning for Weekend Magazine photographs, she displayed some of the warmth and humour her friends know. "I'm a private person," she said. "But everyone seems to know me now. I walk into a store and the clerks say, 'Look, there's Petra Burka.' I feel uncomfortable and walk out." 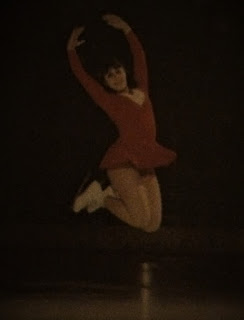 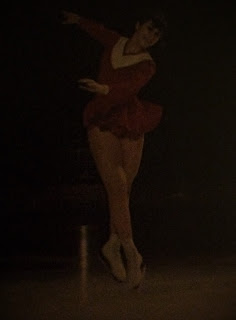 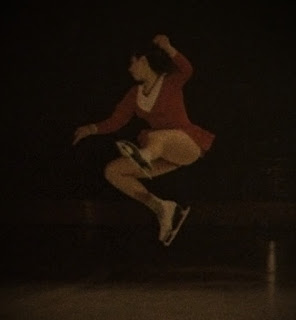 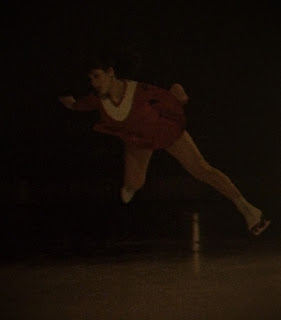 Though professional exhibitions are a long way off (" I want to stay amateur until the 1968 Olympics in France"), Petra has already had a dose of the glamour and grind the touring exhibitions require. The month after she won her world title she travelled with other winning skaters, first to U.S. and Canadian cities and then to Europe. She has returned to Europe twice since for briefer appearances.

"In Europe figure skaters are treated like movie stars," she said. "They have their pictures on magazine covers. In Paris the French pairs champions sing Hit Parade songs. It doesn't matter if they can't sing; they're famous."

"Of course I skate better for a good audience," and she added loyally, "they treat me best in Canada."

The travel, the exhibitions, the sight-seeing are the rewards. What are the drawbacks?

She means the lack of social life. Her day has no place for school sports or dating. Seven hours of it are eaten up by serious practice, another two travelling between rinks. In training, she seldom sees anyone but her mother, sister and skating colleagues. Her first three hours of practice from 7 to 10 A.M., she shares only with the cleaning staff at Maple Leaf Gardens. In the afternoon she shares the ice at her club with six or seven other competitive skaters, some of them also coached by her mother.

This is her program from Christmas through Easter, competition time. The rest of the year she may skate only a few hours a week, but then it's time to catch up on lost schooling. In spite of four months' absence from Lawrence Park Collegiate, Petra managed a B average on the four Grade 13 papers she wrote last year. This year she will write five more.

Petra's training is the focal point for the whole Burka family. They moved a year ago to a pleasant two-storey house 10 minutes' walk from the Toronto Cricket, Skating and Curling Club in North York. Jim Burton, secretary of the club, keeps track of Petra's skating and publicity engagements.

Mrs. Burka and Petra's sister Astra travel everywhere with her. Astra won the central Ontario junior women's championship in 1964, but she has not been good enough to make the Canadian team. "She just skates for fun," explains Petra, "but I like to have her along on tour."

Mrs. Burka not only coaches Petra; she also protects her. "Petra doesn't get a fraction of the phone calls or request for dinners, TV shows, exhibitions that come to her," says Mrs. Burka.

Petra knows she is sheltered. "I don't know anything about the expense involved," she says when asked how much it costs to win a championship. "You'll have to ask my mother."

"I couldn't even guess how much it costs," says Mrs. Burka. She can set no value on the long hours she spends coaching Petra. The use of Maple Leaf Gardens for practice is another factor that can't be counted in money. "I might not have made the title without it," says Petra.

Permission to use the famous arena came after president Stafford Smythe's daughters, also figure skaters, told him about Petra. "They said she needed some help and I would I let her use the ice," said Smythe. "We never rent the Gardens. None could afford it. I shudder to think what it would cost."

The Canadian Figure Skating Association, helped by government grants, has partly paid for travel to the last two world competitions - for Petra but not for her mother and sister.

As well as coaching. ice rental, academic tutoring and travel expenses, there is the equipment: boots, blades and costumes. Mrs. Burka tries to keep these costs down too.

"Things are getting out of hand when parents give champion equipment to a beginner," she says. Petra had one pair of skates until she won her first gold medal. Now she has two - one of figures, one for free skating. Each pair cost $100.

Keeping her well dressed on the ice is another expense. The simple red wool costume she wore for the school figures at the world trials at Colorado Springs cost $40.

The championship Petra won last spring is the highest a figure skater can go. The standards she met are even higher than in Olympic competition.

"But the Olympics have more glamour," Petra says. And she plans to retain her amateur standing and top place until 1968.

Where can Petra improve? "I need more grace," she answers. "Skating shouldn't just be athletic. It should be pleasant to watch as well."

There is one reason she dropped the spectacular and tricky triple Salchow (three rotations in midair after taking off backwards on the right skate, then landing, still going backwards, on the left skate) from her routine after it caught the attention of judges and audience in 1962. "I don't think girls should jump and make noises when they land on their skates," she said before the 1965 competitions. To learn to contain her athletic exuberance she will continue ballet lessons and perhaps introduce some of the movements she learns in her solo machine.

"It starts slowly. Then I show off my big, fast jumps. before I go back to slow movements to bring out what grace I have," she says modestly.


To compete in the Olympics, Petra must also maintain her amateur status. This means she must make no money, directly or indirectly, from skating. She can accept up to $50 in gift certificates - not cash - for an exhibition. She had to reject the offer of a car after winning her world title.

Petra is not a public personality. "She doesn't know it," her mother said, "but I've been approached by an ice show. I didn't even ask what they would pay her. You can see for yourself she's not the type for a show."

"It'll be hard enough for her to stay amateur champion the next few years," says Mrs. Burka. "She's used to coming from behind. Now she must defend her title - a new experience."

Skate Guard is a blog dedicated to preserving the rich, colourful and fascinating history of figure skating and archives hundreds of compelling features and interviews in a searchable format for readers worldwide. Though there never has been nor will there be a charge for access to these resources, you taking the time to 'like' on the blog's Facebook page at http://www.facebook.com/SkateGuard would be so very much appreciated. Already 'liking'? Consider sharing this feature for others via social media. It would make all the difference in the blog reaching a wider audience. Have a question or comment regarding anything you have read here or have a suggestion for a topic related to figure skating history you would like to see covered? I'd love to hear from you! Learn the many ways you can reach out at http://skateguard1.blogspot.ca/p/contact.html.
Posted by Skate Guard Blog at March 30, 2017
Email ThisBlogThis!Share to TwitterShare to FacebookShare to Pinterest
Newer Post Older Post Home