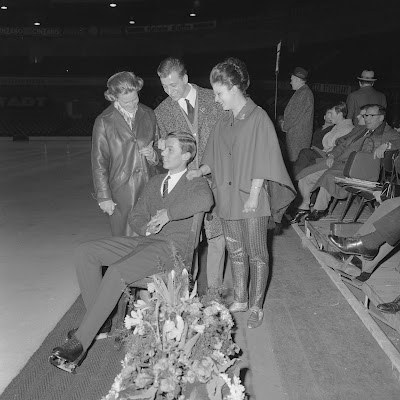 In the late fifties and early sixties, Sjoukje Dijkstra and her friend and training mate Joan Haanappel's successes drew an immense amount of interest to figure skating in The Netherlands. Interestingly, the country where ice skating history all began had shown more interest in speed skating, 'touring' (traversing long frozen canals and rivers on skates) and hockey in the late nineteenth century and the first half of the twentieth century. Until these two talented women came on the scene, figure skating was about as popular as alpine skiing in Bermuda. At the same time these two talented young skaters were bringing attention to the sport, so were others... and today we'll meet some of those sensational skaters whose stories many aren't too familiar with! 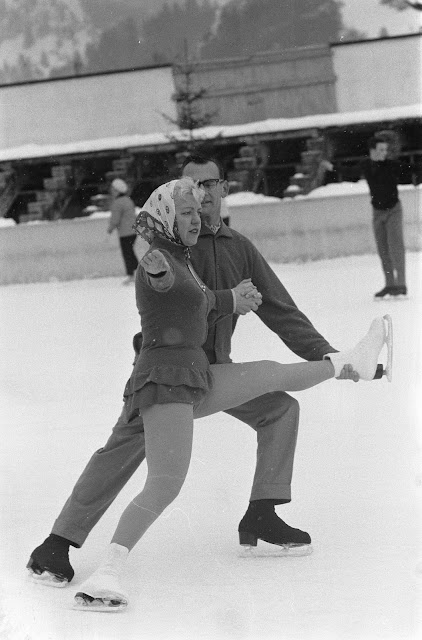 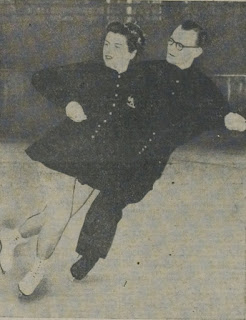 Making their international debut in the 'unofficial' ice dance competition at the 1951 World Championships in Milan Italy, Catharina and Jacobus Odink reigned for over a decade as Holland's first great ice dance team. Training in The Hague at what was then Holland's only indoor rink, the couple gallantly waltzed their way through almost a dozen major international competitions in the fifties, becoming the first Dutch ice dancers to compete at both the European and World Championships. Their best finishes came at the 1958 European Championships in Paris and the 1958 European Championships in Bratislava, where the placed a creditable sixth... to this day still the highest finish ever by a Dutch ice dance team at that event! The Odink's won six consecutive Dutch titles from 1956 to 1961, retiring from competition the same year the World Championships in Prague were cancelled as a result of the tragic Sabena Crash that claimed the lives of the entire American team. Their early successes paved the way for ice dancing to be taken seriously as a discipline in The Netherlands. 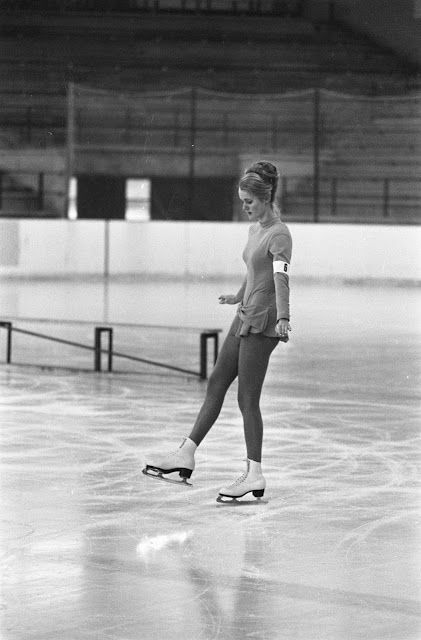 Amsterdam's Lia Does rose through the ranks of Dutch figure skating while Sjoukje Dijkstra was at the height of her success. She made her debut in the senior ranks in 1969, winning her first of two Dutch titles that year in the North Brabant city of Den Bosch. Does' Olympic dreams were all but squashed when American born skater Dianne de Leeuw opted to take advantage of her dual citizenship and skate for the country of her mother's birth. Stronger in freestyle than in the figures, Lia placed seventeenth at the 1970 European Championships, her only major international competition. It was two spots higher than de Leeuw would place in her debut at the same event the following year. 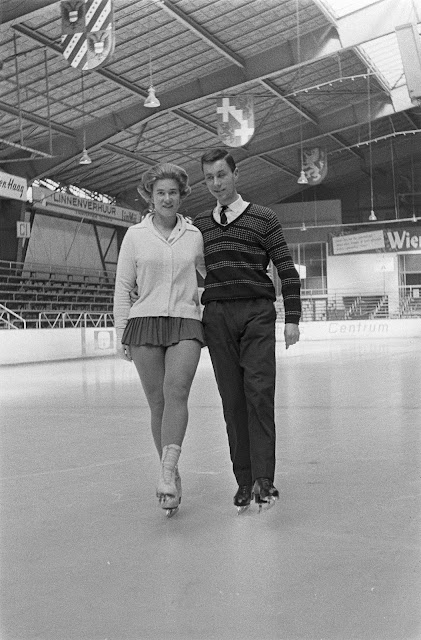 Born May 17, 1944 in The Hague, Wouter Toledo started skating at the age of five when his father
took him to the city's only ice rink. Quickly showing promise, he made his debut at the Dutch Championships at the age of thirteen. The same year, he became the first men's skater from The Netherlands to compete at the European Championships, which then didn't have lower age limits. From 1958 to 1964, Toledo won an impressive seven Dutch titles as well as a bronze medal in ice dance at his National Championships with Truusje Geradts. Frequently criticized by the Dutch press for his weakness in the jumping department, he began training in Great Britain and Davos under famed Swiss coach Arnold Gerschwiler, who also coached Sjoukje Dijkstra and Joan Haanappel. The March 3, 1964 issue of "The Telegraph" noted, "The training under Gerschwiler gave him more security. He became physically stronger, which had benefited his jumping ability. A place in the top eight is probably too much to ask, but the determination of the Hague-born skater has no end." Toledo's best effort internationally was a twelfth place finish at the 1961 European Championships in West Berlin. The Dutch newspaper "New Leidsche Courant" noted, "His role was modest, not striking, but not shameful." The Royal Dutch Skating Association provisionally registered him for the 1964 Winter Olympics, but after he finished fourteenth at that year's European Championships, his entry was withdrawn. After a nineteenth place finish at the 1964 World Championships in Dortmund, he retired from competitive ice skating at the ripe old age of nineteen and placed sixth at the World Roller Skating Championships. 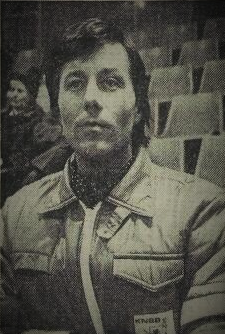 Toledo coached for many years at the Haagsche Ijsclub Houtrust in The Hague but had a stroke at the age of fifty seven and then underwent chemotherapy for rectal cancer in 2003. He returned to coaching and now teaches seniors to skate. He also still ice dances, colostomy bag and all, in his seventies. In a 2015 interview with Rietje Krijnen for "Stomavereniging", he joked, "People find it foolish that I talk so openly about even fool me so openly about it. What do I care about that now?
The Stoma is my salvation... I sometimes say to people: I shit in my stomach. At first they look at me weird, but if you explain it, it's fine." 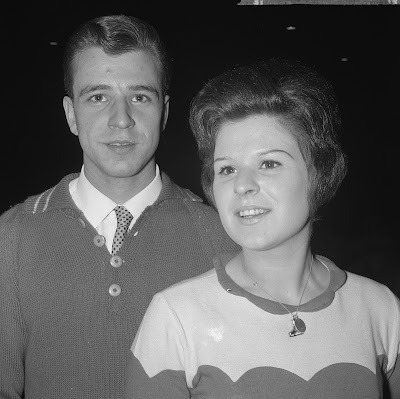 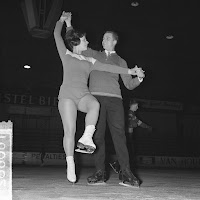 Hailing from De Lier, a small village in South Holland, siblings Jopie and Nico Wolff started their career skating in the shadows of the Odink's but came into their own in the early sixties, reigning as Dutch ice dance champions from 1962 to 1964. Alternating training time between The Hague and Great Britain with Roy Callaway, the talented young team made their international debuts at the ages of eighteen and twenty at the 1964 European Championships in Grenoble, placing tenth in a field of thirteen teams. At their only World Championships later that winter in Dortmund, they finished dead last but captured the hearts of the West German audience. The March 13, 1964 issue of "The Telegraph" reported, "Heartwarming was the [appearance] of Jopie and Nico Wolff , the first Dutch couple registered again for an international tournament for many years...  It was surprising to see how strong the pair has progressed and how well the free dance was executed. In a spiral, where Jopie Wolff is almost horizontal across the ice, her brother fell because he just got... her skirt beneath his skates. The pair recovered immediately and was at the end a heartfelt applause from the hundreds of viewers." Retiring from the competitive ranks after that event, the Wolff's are remembered in Holland as an absolutely charming young ice dance team who never quite reached their potential internationally.

Skate Guard is a blog dedicated to preserving the rich, colourful and fascinating history of figure skating and archives hundreds of compelling features and interviews in a searchable format for readers worldwide. Though there never has been nor will there be a charge for access to these resources, you taking the time to 'like' on the blog's Facebook page at http://www.facebook.com/SkateGuard would be so very much appreciated. Already 'liking'? Consider sharing this feature for others via social media. It would make all the difference in the blog reaching a wider audience. Have a question or comment regarding anything you have read here or have a suggestion for a topic related to figure skating history you would like to see covered? I'd love to hear from you! Learn the many ways you can reach out at http://skateguard1.blogspot.ca/p/contact.html.
Posted by Skate Guard Blog at May 24, 2017
Email ThisBlogThis!Share to TwitterShare to FacebookShare to Pinterest
Newer Post Older Post Home