Min And Mo: The Much Maligned Muscovites 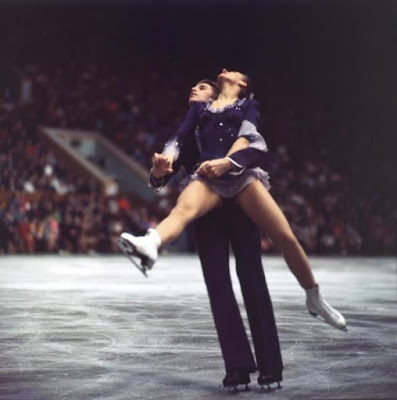 "They were tall, balletic, as remote and glorious as creatures from another planet... Here were two people who were obviously man and woman in a relationship, with a story to tell." - Jayne Torvill and Christopher Dean, "Facing The Music"

Muscovites Andrei Olegovich Minenkov and Irina Valentinovna Moiseeva - or Min and Mo, as affectionately monikered by North American audiences - were a dominant force on the international ice dancing scene for a decade. They were twice Olympic medallists, twice World Champions and twice European Champions... and like all figure skaters to this day, they faced criticism. However, the sheer variety of critiques that they faced as a team verged on ridiculous. 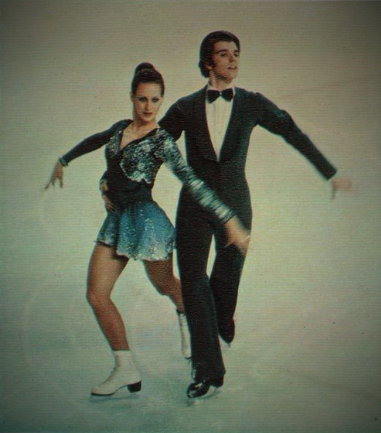 Andrei, the son of two engineers, was born on December 6, 1954 and Irina on July 3, 1955. They both started skating in 1961 at the Young Pioneers Stadium in Moscow and were paired at twelve and thirteen by their first coach Igor Kabanov.

When Kabanov was offered a job with the Soviet Sports Committee, he handed his team over to the then inexperienced Tatiana Tarasova. Under Tarasova's watchful eye, Min and Mo's skating was characterized very early on by their flair for the dramatic. Stanislav Torakev, writing in the "Sovietsky Sport" noted that "Tarasova's style of mounting a number is theatrical - undisguised, open, rich. She thinks in images. Each of her dance compositions is a bit of a fairy tale - for adults." This was very much the case in Tarasova's choreography for Min and Mo. Many liked it; some didn't. She called these works "her experiments". 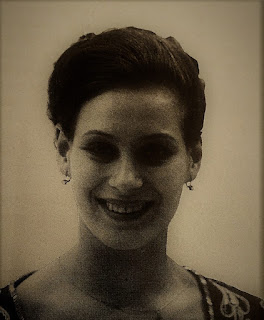 Frank Loeser, perennial critic for "Skating" Magazine first took notice of the couple at the 1973 World Championships in Bratislava. He noted, "There was a dance couple who should have been observed by all of the free skating pairs... Irina Moiseeva and Andrei Minenkov, who displayed a classic concept of pair skating... Neither the man nor the woman shone above the other. There was a constant interplay between the two individuals. Irina appeared delicate, vulnerable and, at times, evasive. Andrei played to these desirable qualities with almost yearning tenderness. The message was inherent to their movement and it is such a quality that will make any pair shine." Yet, as the years passed, Loeser's critiques of the couple were all over the place. By that autumn at Skate Canada, he felt Irina "perhaps carries her arms too high, too long and is a bit 'Pakhomova' in the quality of movement." Irina's tendency to emote with her face much like Lyudmila Pakhomova led others to make the same conclusion that she was copying her more decorated rival in the team's career.


Suggestions that the team was bending - or even breaking - the strict rules of ice dancing at the time were constant. At the 1974 World Championships, there were allegations that some of the judges 'overlooked' an illegal lift. In her book "Figure Skating History: The Evolution Of Dance On Ice", Lynn Copley-Graves noted that at a year later at Worlds, "Moiseeva/Minenkov scrapped the OSP that had won over the crowds at Skate Canada for a new pattern and new music because a judge questioned if the Skate Canada version fit the blues category. The revised pattern was in fact not new. It had many of the steps of their 1974 tango OSP and imitated Pakhomova. Their beautiful, impassioned free program received very high marks for too much 'sob stuff' and 'two-footed work'... Courtney Jones (GRB) and Mabel Jones (USA) marked down Moiseeva/Minenkov in third place for illegal moves or overactive arms, but all the other judges gave them first... The legend of Mo and Min, the 'cursed', had begun, paving the way for the Duchesnay's in the 1980's. Irina and Andrei from then on would be asked why they persisted in presenting programs the authorities neither accepted or understood." 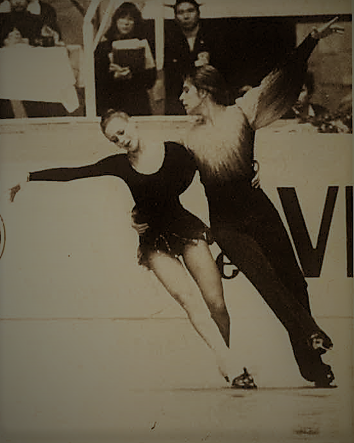 The "programs the authorities neither accepted or understood" included their one-themed "West Side Story" free dance, which flew in the face of the seventies ice dance convention of skating to a mishmash of rhythms, often badly edited. "West Side Story" won Min and Mo their second World title... but also split the judging panel at the 1977 European Championships. When they opted to skate a more traditional waltz two years later, people thought they were too conservative - which ironically was exactly the same criticism the Duchesnay's faced when they followed up "Missing" with "West Side Story". At times, it seemed as if Min and Mo were damned if they did and damned if they didn't. 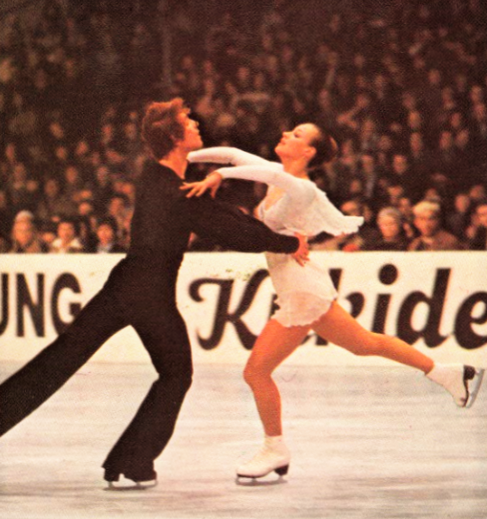 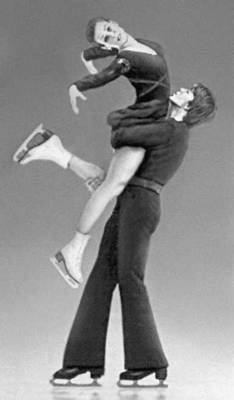 Some felt they - or more accurately, Irina - skated in an over the top fashion. Copley-Graves noted that at the 1978 World Championships in Ottawa, "Irina ignored the plot and died on Andrei's knee at the end as he moved dramatically around the rink, starting the fad for deaths on ice. She held the pose too long and they collapsed, turning the drama to comedy and losing, forever, the title." That same year, "The Globe And Mail" slammed the Soviets for their costumes. Nora MacCabe, in an impassioned plea for decency, replete with hand wringing, wrote: "The Russians, who dominate the ice dancing competition, were the worst offenders... In the opening dance, defending world champion Irina Moiseeva wore what appeared to be the sexiest dress, a black number with only a Band-Aid sized strip of material to keep the neckline from plunging as low as the briefest bikini. In the second dance, she bared her back almost to the waistline." In a letter to the editor, Sudbury's Virgina Parraga defended the couple: "I for one enjoyed looking at the beautiful twosome of Moiseeva and Minenkov in "The Globe and Mail", much more than the continuous deluge of the Emanuel Jaques case. Why attempt to change an art form such as skating into something ugly or lascivious? The next step will be the size and style of a ballerina's tutu; and Romeo and Juliet will be termed X-rated. Who are these self-appointed guardians of public taste, anyway?" 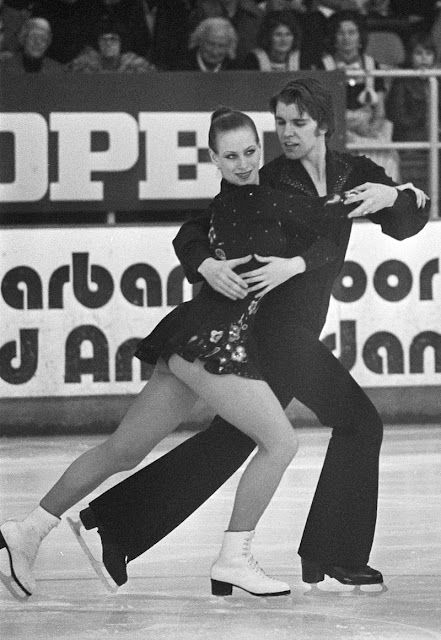 In 1979, Min and Mo left Tarasova and worked first with former rival Lyudmila Pakhomova and then with Natalia Dubova. Nearing the end of their competitive career, the criticisms were quite frankly all over the place. In "Ice And Roller Skate", Alexandra Stevenson wrote that Min and Mo skated the Yankee Polka with "his chin out and her doe-eyed, beseeching look - which was totally at odds with the spontaneous peasant gaiety called for in this dance." Wendy Sessions wrote that at the 1981 European Championships, she "couldn't believe the Russians' compulsories. They were all out of step and out of time. I couldn't see how they could get high marks." By the 1982 World Championships, Lawrence Demmy was of the belief that Andrei had the same technical ability of Christopher Dean, but he "was underrated in the shadow of his beautiful and creative wife." Interestingly, that year Min and Mo chose to skate to Maurice Ravel's "Bolero" in one section of their free dance, which Torvill and Dean would of course make their signature program two years later.


Despite being accused of everything from copying to illegal moves to inappropriate costumes to over the top choreography, Min and Mo soldiered on during an intensely political era in ice dance. They held their own with Pakhomova and Gorshkov, Linichuk and Karponosov, Regőczy and Sallay, Torvill and Dean and Bestemianova and Bukin. They also earned the admiration of many of their competitors. Jayne Torvill and Christopher Dean were awestruck by their skating, recalling, "we just watched them open-mouthed... They came from a tradition totally different from the false, staid, uptight background that was familiar to us, the postures and steps that had dominated ice-dancing for a decade, since before we started." Toller Cranston described the essence of their dancing as an "flamboyant, melodramatic, over-the-top, overly choreographed style that the Soviets did well and nobody else could manage." Tracy Wilson raved, "They had grace, elegance and a sense of theatre... I wanted to skate just like them." 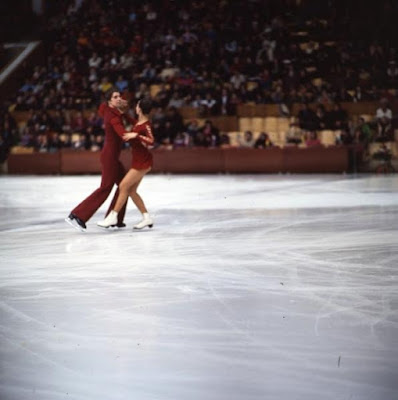 Min and Mo officially retired from competitive skating in November 1983 in a ceremony at the Prize Of Moscow News at the Palace of Sport in Luzhniki. Irina was pregnant with the couple's daughter Elena at the time. She graduated from the State Central Order of Lenin Institute of Physical Education, he from the Moscow State Institute of Radio Engineering, Electronics and Automation. Both coached in America for a time before returning to Moscow, where after a failed attempt at running a travel agency, Andrei went into business importing and distributing everything from chocolate bars to frozen shrimp and pizza. In 2001, he moved into producing dairy products - cheese, butter, sour cream... and of course, ice cream. 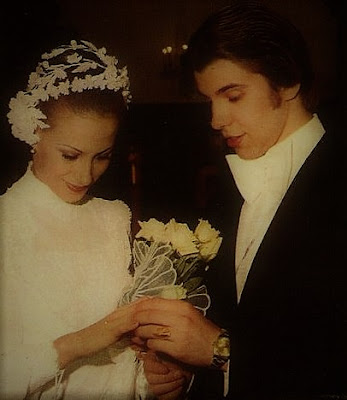 Reflecting on their competitive careers in a 1990 interview in "Patinage" magazine, Andrei said,
"Rules are not clear. One can interpret them as they wish. There should be more freedom. What is important is that the dances be interesting." Irina added, "There has to be a federation and some officials, but they do not have to interfere in sports programs. It was not our style to go from offices to offices to plead our cause. We preferred to answer on the ice. In spite of all the difficulties in our career, we have tried to apply our conceptions and in that sense, we have succeeded. But each innovation is painful."


The wonderful moral to Min and Mo's story is that in the face of critics ripping them apart for a million different reasons, they stuck it out for the long haul and walked away with not only medals... but perspective.

Skate Guard is a blog dedicated to preserving the rich, colourful and fascinating history of figure skating and archives hundreds of compelling features and interviews in a searchable format for readers worldwide. Though there never has been nor will there be a charge for access to these resources, you taking the time to 'like' on the blog's Facebook page at http://www.facebook.com/SkateGuard would be so very much appreciated. Already 'liking'? Consider sharing this feature for others via social media. It would make all the difference in the blog reaching a wider audience. Have a question or comment regarding anything you have read here or have a suggestion for a topic related to figure skating history you would like to see covered? I'd love to hear from you! Learn the many ways you can reach out at http://skateguard1.blogspot.ca/p/contact.html.
Posted by Skate Guard Blog at September 21, 2017
Email ThisBlogThis!Share to TwitterShare to FacebookShare to Pinterest
Newer Post Older Post Home