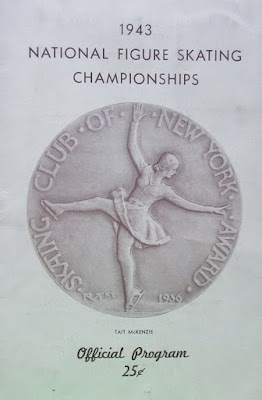 Hosted by the Skating Club of New York, the 1943 U.S. Figure Skating Championships were held on March 6, 7 and 8, 1943 - a Saturday, Sunday and Monday. School figures and the preliminary rounds of the dance events were held at the Iceland rink, with finals contested downstairs at Madison Square Garden. 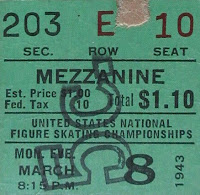 Unlike in Europe where in many countries figure skating's development had slowed to a standstill due to World War II, amateur figure skating in America was evolving at a rapid pace and enjoying a boom in media coverage, largely due to the explosion of professional skating tours and big budget motion pictures starring Sonja Henie.

At the same time, the USFSA was asking skaters to donate trophies and pins containing pewter for war equipment manufacture. Numerous clubs donated carnival proceeds to the War effort. "Skating" magazine even donated typewriters. The USFSA held the Annual Meeting of the Governing Council a month early to coincide with the U.S. Championships in New York. They voted to continue "Skating" magazine the next winter despite the War, but to postpone publication of the next rulebook and yearbook and publish rule changes in "Skating" instead. Despite the impacts of the War, engineer Heaton Ridgway Robertson, who was USFSA President at the time, recalled, "The competitions were continued all through the War, as were most of our other activities. This was at first considered to be impractical and perhaps not even patriotic. It was later agreed that competitions should be run wherever there were suitable entries, and other activities followed a similar course. As it turned out, there were plenty of entries in all but the Men's Senior class, and the wartime competitions were otherwise remarkably successful." 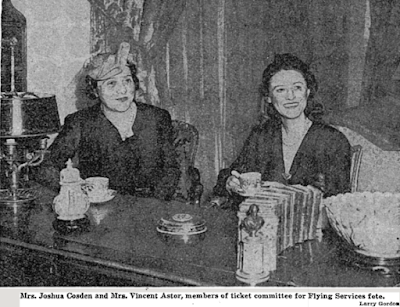 One of the highlights of the 1943 U.S. Championships was a gala benefit organized by the American Flying Services Foundation, an organization whose goal was to "keep 'em flying". The A.F.S.F. devoted itself to funding medical services for young men who were refused entry to the United States Army Air Corps due to 'correctible physical and educational defects'. Another highlight of the event were the exciting skaters who took part. Let's take a look back at the stars and stories that made the 1943 U.S. Championships so memorable!

The novice men's and women's titles were won by G. Austin Holt of the St. Moritz Ice Skating Club and Ann P. Robinson of the New Haven Skating Club. A young Bob Turk placed fourth in the novice men's event. Eddie LeMaire of the Skating Club of New York, the son of famous professional skaters Maud Reynolds and Francis LeMaire, bested a pair of Californians - Marcus Nelson and Jimmy Lochead Jr. - to claim the junior men's title. In junior pairs, Betty Schalow and Arthur Preusch of St. Paul emerged victorious over Ruth Flint and Lyman E. Wakefield Jr., Karol and Peter Kennedy and Donna Jeanne Pospisil and Jean-Pierre Brunet. Wakefield was a Lieutenant in the Navy and Brunet was the son of Olympic Gold Medallists Andrée (Joly) and Pierre Brunet. Hildegarde Balmain of Kew Gardens topped eleven others in the junior women's event. LeMaire and Balmain's wins helped secure the Bedell H. Harned trophy for the most points earned by a skating club for the host Skating Club of New York. 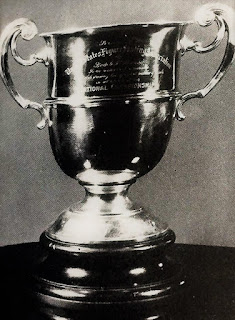 Willie Frick and Bud Wilson's students Dorothy L. Glazier and Lyman E. Wakefield Jr. of the Skating Club of Boston made history as the first U.S. junior dance champions, defeating Nancy Blair and Michael McGean, Kathie Mehl and Allan Van Alstyne and six other teams. Dancers performed the Continental Waltz, Three-Lobed-Eight Waltz, Tango and Fourteenstep. A year earlier, the event the juniors competed in would have been the equivalent of senior dance. 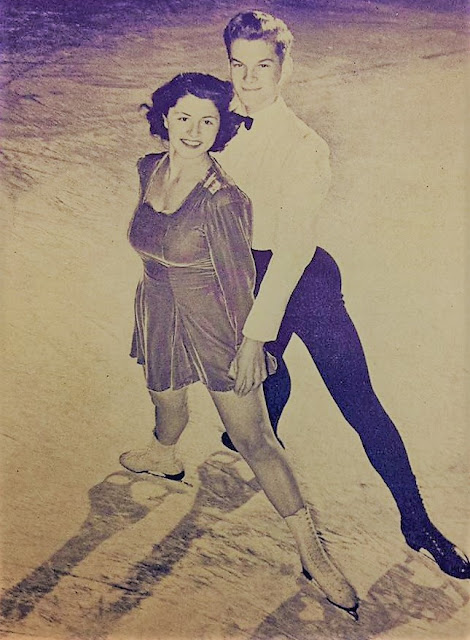 No fours competition was held, but Doris Schubach and Walter Noffke of Holyoke, Massachusetts managed to defend the senior pairs title they'd first won the year prior in Chicago. Interestingly, Arthur Preusch - who had won the junior pairs title with Betty Schalow - finished second in senior pairs with a different partner, Janette Ahrens. The bronze went to Jimmy Lochead Jr. and Marcella May of the Skate and Ski Club in California. Doris and Walter later married. Looking back on her skating career years later, she recalled, "I was always afraid to perform alone and consented to enter competition only when my father suggested that Walter and I perform as a pair... We had many compliments on the originality and imaginative quality of our programs."

In the history making first Gold dance event at the U.S. Championships, six couples skated the Continental Waltz in a preliminary round, then performed the Three-Lobed-Eight Waltz, Blues, Quickstep and Westminster Waltz in the Finals. Pairs medallists Marcella May and James Lochead, who had only been skating together for eighteen months, took top honours. Marjorie Parker Smith and Joseph K. Savage finished second and Nettie Prantell and Harold Hartshorne third. Parker Smith, Savage, Prantell and Hartshorne had all won U.S. dance titles prior to the War. At the time of their medal wins in New York in 1943, Savage was sixty three and Hartshorne was fifty one. In her book "Figure Skating History: The Evolution Of Dance On Ice", Lynn Copley-Graves recalled, "At times the music belched... giving forth 'shrieks when music was called for and even at its best could only labelled canned'. Another relic of these pre-Zamboni times was the water wagon system used to maintain excellent ice throughout the competitions." 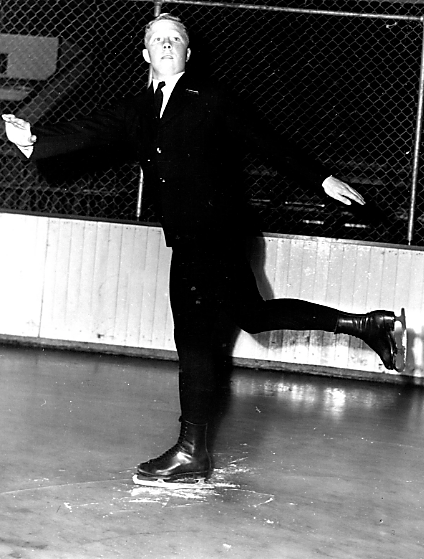 Eugene Turner and Bobby Specht, the winners of the senior men's titles at the two previous U.S. Championships, had both turned professional. Nineteen year old Arthur Vaughn Jr. of the Philadelphia Skating Club and Humane Society, who'd lost to both Turner and Specht at those Championships, took a slim four point lead in the school figures over St. Paul's Arthur Preusch and then - according to "Associated Press" reporters - "ran off with the title" in the free skating. The bronze medal went to William Nagle, the perennial last place finisher from Brooklyn who just wouldn't stop competing. Turner, Specht and Vaughn would all go on to enlist in the U.S. Army.

Defending champion Jane Vaughn had married and retired, leaving seventeen year old Gretchen Merrill of the Skating Club of Boston - the runner-up to Vaughn in 1941 and 1942 - as the heavy favourite. She took a slim lead in figures thanks to first place ordinals from judges from Boston (her hometown) and California (where she went to school). The other three judges had her second, fourth and fifth. 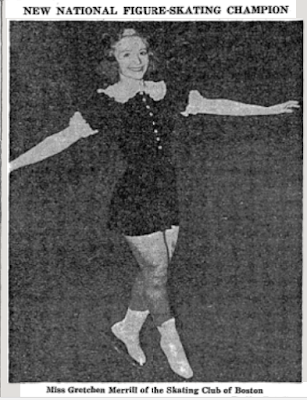 Over five thousand spectators watched the final phase of the women's competition. Fifteen year old Dorothy Goos of New York, who was only fifth after figures, won the free skate but still finished seventeen points behind Merrill overall, as figures counted for sixty percent of the overall score. Janette Ahrens moved up from fourth to third, while Ramona Allen of Oakland and Phebe Tucker from New York, who had been second and third after figures, dropped 'off the podium'. Associated Press reporters noted, "Issue was taken with the judges on the ground that they rated Miss Merrill's free skating clearly better than Ramona Allen's and Jane Zeiser's. Both Miss Allen and Miss Zeiser [of St. Louis] presented superbly organized material in flawless fashion, while the new champion was a bit rocky in spots on the Garden's fast surface." The day after the event, Gretchen's mother told reporters, "Gretchen already has an attractive Hollywood offer, but she will not consider it." The reason her mother gave was that was 'coming out' as a debutante that November and "wouldn't have time for pictures". 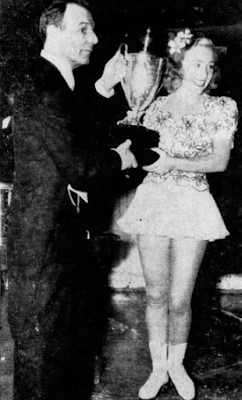 Maribel Vinson Owen, who coached both Gretchen Merrill and novice men's champion Austin Holt, told reporters, "It's so much more nerve-wracking to have your pupil competing than it is to compete yourself.... I get a special thrill out of teaching, for I've had some extraordinary pupils. Gretchen Merrill is a hard worker and a wonderful showman. She is never satisfied, so she will go on getting better and better."

Quoted in the March 29, 1943 issue of the "New York Post", Gretchen Merrill recalled her win thusly: "Gosh! I was the most surprised person there. I did all right in the school figures - loops, rockers, eights and things like that. But when I came to the free skating I was so close to getting that cup and so nervous. I was tightened up. So I fell. My gosh! I didn't think I'd won. I was sitting there so dejected. People kept telling me I'd won but I wouldn't believe it. Then finally it was official. And I was so happy - and so surprised - I laughed till I cried."

Skate Guard is a blog dedicated to preserving the rich, colourful and fascinating history of figure skating and archives hundreds of compelling features and interviews in a searchable format for readers worldwide. Though there never has been nor will there be a charge for access to these resources, you taking the time to 'like' on the blog's Facebook page at http://www.facebook.com/SkateGuard would be so very much appreciated. Already 'liking'? Consider sharing this feature for others via social media. It would make all the difference in the blog reaching a wider audience. Have a question or comment regarding anything you have read here or have a suggestion for a topic related to figure skating history you would like to see covered? I'd love to hear from you! Learn the many ways you can reach out at http://skateguard1.blogspot.ca/p/contact.html.j
Posted by Skate Guard Blog at May 23, 2018
Email ThisBlogThis!Share to TwitterShare to FacebookShare to Pinterest
Newer Post Older Post Home
"As a rule an author has one or two popular ways of contrasting the past with the present. He can treat the past as lying in comparative doleful ignorance, or he can explain that the past was infinitely superior to the day we live in. Of course, either method is the popular journalism of the moment, and in reality there is no sharp contrast, but a gradual transition which leads the past into the present." - Joel B. Liberman, Skating Club Of New York