A Family That Skates Together Stays Together 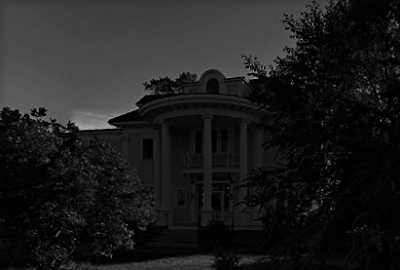 In an opulent Victorian estate on Pond Street in Boston lived William Rotch, his wife Mary (Eliot) Rotch, their four children William Jr., Charlie, Edith and Clara and their servants Henrietta and Jessie. William was a graduate of the École Imperiale Centrale des Arts et Manufactures in Paris. He served as the chief engineer and superintendent of the Fall River Water Works system, a director of the Walker Company which installed electricity in the Waldorf-Astoria Hotel in New York, the engineer of the commission which established the boundary line between Massachusetts and Rhode Island and the first president of the New Bedford Union for Good Works. The extremely busy Mr. Rotch also wrote various reports on railways and water works, had ties to the local whaling industry and even started his own scholarship for architects.

However, even Mr. Rotch's incredibly impressive life's work would arguably pale in comparison to the accomplishments of three of his children in the world of figure skating. Charlie, Clara and Edith Rotch were among the most successful members of the Skating Club Of Boston and Cambridge Skating Club of their era. Let's meet those skating siblings! 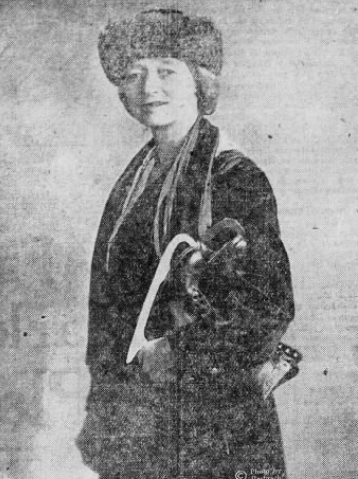 Born August 11, 1874, Edith Eliot Rotch graduated from Radcliffe College in 1901. The winter prior, she (along with her brother Charlie) had the distinction of being one of the first fourteen skaters in America to pass a formalized figure skating test. She was also one of America's top tennis players at the turn of the century. She won the 1908 U.S. mixed doubles title with fellow skater Nathaniel Niles and the 1909 U.S. women's doubles title with Hazel Hotchkiss Wightman. In 1914 at the age of forty, Edith placed second in the senior women's event to Theresa Weld Blanchard at the international figure skating competition held in New Haven, Connecticut now recognized as the first U.S. Championships. 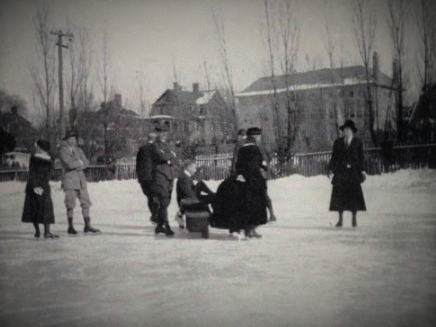 Six years later at the age of forty six, Edith placed second in the junior pairs event at the U.S. Championships at the Iceland Rink in New York City with Sherwin Badger, twenty seven years her junior. In 1922 and 1926 she won the women's free skating competition at the Cambridge Skating Club. Throughout the twenties, she amassed dozens of medals in pairs and Waltzing competitions. Among her partners were brother Charlie, Arthur M. Goodridge, George Von L. Meyer and Jimmie Madden. 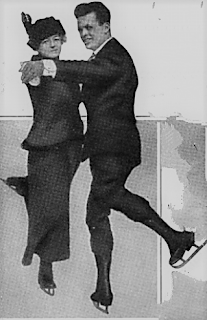 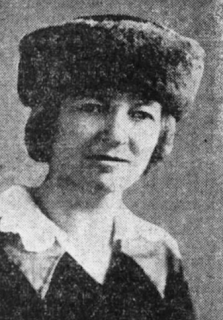 Edith gave up skating after she was thrown from a horse and remained involved in the sport by sitting with Paul Armitage, Theresa Weld Blanchard and Nathaniel Niles on the USFSA's Publications Committee that led to the publication of "Skating" magazine. Her partner Arthur M. Goodridge fondly recalled, "Miss Edith was the outstanding lady skater at the [Cambridge Skating] Club during the nineteen hundreds. It was she who taught Edward M. Howland and Nat W. Niles most of what they learned about figure skating until Mr. [George H.] Browne took them over." Some of Edith's most compelling accomplishments had nothing to do with sport whatsoever. Her 1969 obituary in "The Boston Globe" noted, "Before the [Great] War was over, Miss Rotch, who was believed to be one of the first licensed woman amateur radio operators still active until recently, was responsible for instructing and examining radio operators - for merchant ships and shore installations. And several nights a week she presided over the U.S. Radio School at the old Mechanics building. Miss Rotch, who got her commercial license in 1917 and amateur call letters in 1991, had also been a radio inspector for the Signal Corps. She learned radio at the Eastern Radio Institute and soon after she received a certificate showing she could send 35 words per minute. During the days she learned to type at Bryant & Stratton School. Miss Rotch first received call letters WIRO, later WIZR, and commenced transmitting as a 'ham' operator both from her Beacon street home and her shoreside house in Nonquitt, near New Bedford. As her interest in radio gained momentum, she took a job with the old Postal Telegraph Co. and for nearly two decades was a top-speed operator, first in Gardner and later in Haverhill and Boston. During World War II she worked with the Bureau of Standards, monitoring radio broadcasts on her set, checking on frequencies, locations and reception quality of various stations. And when MARS (Military Affiliate Radio System) was started after the war, Miss Rotch was one of the first to join. The Army controlled system was used to maintain a constant pool of trained radio operators who could be called upon to service in a national crisis." Edith never married and passed away at the age of ninety five on December 11, 1969. 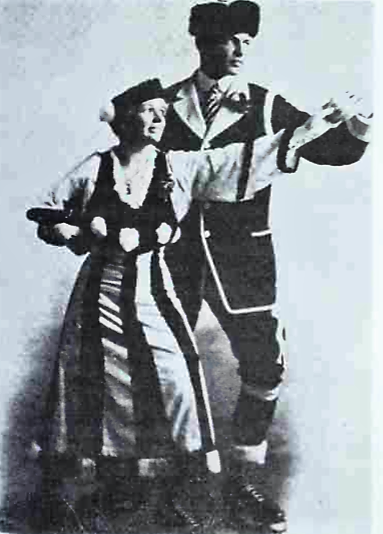 Clara Morgan Rotch was born February 17, 1881. She graduated from the Winsor School in Boston in 1898, attended Racliffe College and graduated from the Museum Of Fine Arts School. At the age of twenty five on March 2, 1907, she married Channing Frothingham, Jr., an eminent physician at the Boston City Hospital. Clara gave birth to no less than seven children between 1907 and 1926. Sadly, her son Timothy Gerrish Frothingham passed away when he was only five, the year after she made her competitive debut as a skater at the 1918 U.S. Championships in New York City, where she won the junior women's event and finished second in senior pairs with Sherwin Badger. 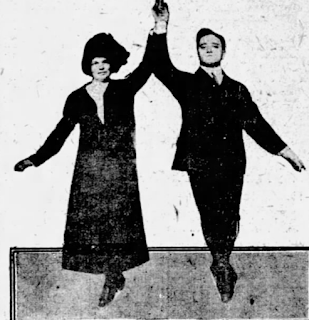 Clara's private loss only fuelled her public ambitions and in 1921, she returned to competition with her brother Charlie and won the bronze medal in the senior pairs competition. From 1922 to 1936, she amassed medal after medal in Waltzing and ice dancing at the U.S. Championships, including two gold medals with Geddy Hill (Maribel Vinson's pairs partner) in 1920 and 1922. Among her many partners were Roger Turner, Jimmie Madden, Teddy Goodridge, Robert S. Coit and Ashton Parmeter. Clara and her brother Charlie were also one of the first three pairs teams in history to medal at the North American Championships in 1923.

After retiring from competition, Clara became one of the first Gold Dance test judges in America. However, her reputation as a judge wasn't exactly glowing. Her paintings of marine scenes were held in higher regard. An accomplished artist, she also designed the medallion on the plaque which the USFSA presented to its national champions for many years.

Sadly, Clara passed away in New Bedford, Massachusetts on September 5, 1976, also at the age of ninety five, leaving behind no less than twenty five grandchildren. 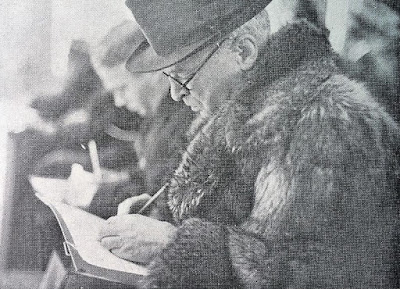 Born May 19, 1878, Charles 'Charlie' Morgan Rotch attended Hopkinson's School in Boston before attending Harvard University, where he was a member of the tennis and track and field teams. He graduated in 1901 and worked as a stock broker with the Old Colony Trust Co. and later, the firm of Townsend, Dabney and Tyson. A member of the First Corps Cadets, he served as a company commander of Company C of the Yankee Division in France during the Great War. He married his first wife Helen (Bradley) in 1925. Together, they had five children. When Helen passed away in 1939, he remarried to Mrs. Louise Sprague from Milton. 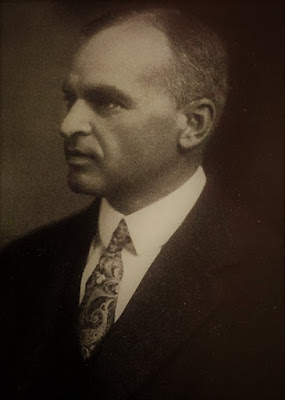 As a skater, Charlie's accomplishments were every bit as impressive as his both of his sisters. In addition to the aforementioned medal wins at the U.S. and North American Championships, he won the Cambridge Skating Club's men's free skating competition in 1922, the silver medal in the Waltzing competition at the 1923 U.S. Championships in New Haven with Theresa Weld Blanchard and countless other medals in ice dancing competitions during the early twenties. 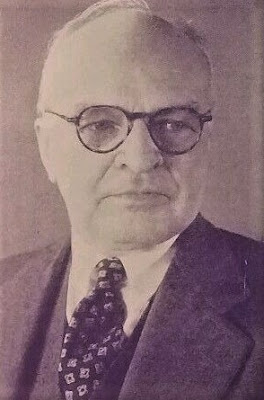 Charlie later turned his attention to judging and refereeing, acting as an American official at the 1924, 1928, 1932 and 1936 Winter Olympic Games and countless other national and international events of the period. In 1924, he was elected as the President of the Skating Club Of Boston and from 1932 to 1937, he served two terms as the President of the USFSA. The year he was first elected, his former competitor and dear friend Nathaniel Niles passed away. Determined to better the sport in his friend's memory, he supervised the first judging school in America in 1936. During his reign as the USFSA's President, summer skating in America began to thrive, the first Midwestern Championships were held, the first club from the Pacific Coast joined the USFSA and open marking was introduced at the U.S. Championships. He later chaired the USFSA's Judges Committee and gave his last performance as a skater in the Skating Club Of Boston's 1956 "Ice Chips" show at the age of seventy six.

Charlie passed away in Boston on February 4, 1964 at the age of eighty six after a long illness. Benjamin T. Wright recalled, "He was pretty much the mentor of Sherwin Badger and many other Boston skaters who competed before the War... Actually, there's a whaling ship at Mystic Seaport named Morgan and that's the family."

Incredibly, Edith, Clara and Charlie weren't even the only skaters in their family! In 1938, yet another descendant of the Rotch clan, William Penn-Gaskell Hall Jr., won the silver medal in pairs with his wife Annah Colket McKaig at the Eastern Championships in Lake Placid, New York and the gold medal in junior pairs at the U.S. Championships in Philadelphia. Annah McKaig's father Edgar S. McKaig was once President of the Philadelphia Skating Club and Humane Society, tying together two of the two of the most historic skating clubs in American skating history by marriage... and giving a new meaning to the skating family.

Skate Guard is a blog dedicated to preserving the rich, colourful and fascinating history of figure skating and archives hundreds of compelling features and interviews in a searchable format for readers worldwide. Though there never has been nor will there be a charge for access to these resources, you taking the time to 'like' on the blog's Facebook page at http://www.facebook.com/SkateGuard would be so very much appreciated. Already 'liking'? Consider sharing this feature for others via social media. It would make all the difference in the blog reaching a wider audience. Have a question or comment regarding anything you have read here or have a suggestion for a topic related to figure skating history you would like to see covered? I'd love to hear from you! Learn the many ways you can reach out at http://skateguard1.blogspot.ca/p/contact.html.
Posted by Skate Guard Blog at July 16, 2018
Email ThisBlogThis!Share to TwitterShare to FacebookShare to Pinterest
Newer Post Older Post Home