The Defection Of Ede Király 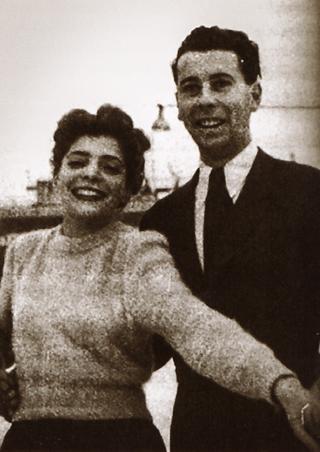 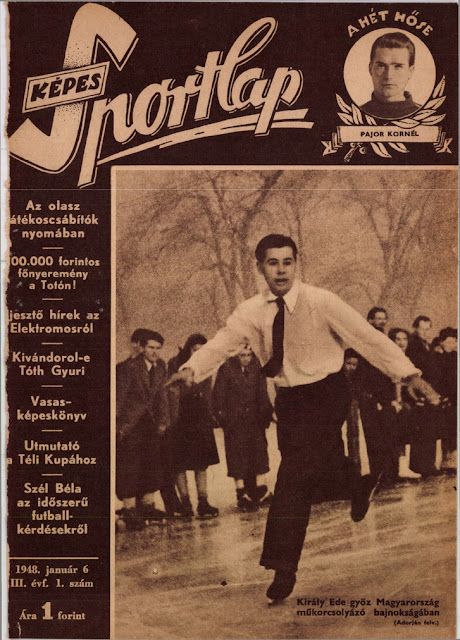 Studying under legendary Swiss coach Arnold Gerschwiler, Ede was one of the finest skaters of his era. With partner Andrea Kékesy, he was the one of the first to execute an overhead Axel lift. As a singles skater, he was attempting triple jumps in practice at the same time his competitor Dick Button was introducing them to competition. In 1950, he graduated from the Budapest University Of Technology with a degree in civil engineering... but behind the scenes life was anything but the fairy tale it appeared to be on the ice. 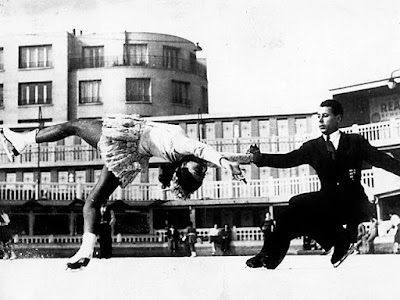 As the defending European Champion, Ede entered the men's event at the 1950 World Figure Skating Championships held at Wembley in London as Europe's best hope to challenge Dick Button. Although he finished a strong second ahead of Hayes Alan Jenkins in both the school figures and free skating, Button was really in a class of his own. In the end, Ede settled for silver but his biggest victory would come after the competition ended.

Elek Bolgár, the Hungarian Ambassador to Great Britain, hosted a reception for the participants in the competition. Dick Button recalled, "Ede Király, who had the day before finished second to me, and had also won the World Pairs title, appeared in an extremely lighthearted mood at the embassy. His conversation was pleasant and casual as he greeted the Ambassador effusively. Király was booked on a plane the following morning with all the contenders for the Grande Coupe de France to be held in Paris. In the grayness of the morning, with the rush of checking baggage... no one noticed Ede Király was not among the passengers. It wasn't until Paris papers blared forth the news the next morning that we all realized Ede had too joined the growing ranks of dissenters asking sanctuary of the Home Office in London."

As expected, Bolgár and the powers that be in the Hungarian government were none too pleased to have had the wool pulled over their eyes - to put it mildly. They'd invested considerably in their star, placing trust in Ede and his partner to train in England under Arnold Gerschwiler without 'causing any problems'. Bear in mind that this was six years prior to the Hungarian Uprising, but Hungary was under the authoritarian rule of Communist leader Mátyás Rákosi, and thousands of members of the 'bourgeois' class were arrested, imprisoned, tortured, tried and deported as part of 'the Purge' during this period. The story of Ede's refusal to return to Hungary even reached North America. On March 12, 1950, "The Milwaukee Journal" reported, "Penniless and without a passport or identity papers, the slight 24 year old engineering lecturer said he thought his life would be in constant danger if he went home. He stated that he had been ordered to join the Communist party 'or suffer the consequences.'"

While seeking asylum in London, Ede explained, "An intelligence officer of the Hungarian state security police went with us to Oslo for the European Championships and came along to London. He has my passport and all my papers." Rezső Dillinger, a former European and World Medallist in pairs skating who was serving as the Hungarian team's trainer, denied press accounts of Ede's defection altogether, stating "Kiraly was staying in [London] for an extra four weeks, with Home Office permission, to continue his training and would then return to Hungary. We are all members of the Communist Party, including Király."

Ede's ticket to safety came in the form of an invitation from Dick McLaughlin to coach at the Oshawa Skating Club in Canada. It was there where he taught a young future World Champion by the name of Donald Jackson. In George Gross' 1977 biography of Jackson "King Of Blades", he recalled, "Ede's love for the sport had made his life, brought him fame, travel, happiness. He never failed to project his sense of enjoyment to his pupils. The message was, 'Aren't we lucky to be doing what we love doing, and doing it better every day?'... Ede had the revolutionary idea of teaching figures in such a way as to help free skating. He wanted to bring figures and free skating together to form a unit."

Although Ede briefly left the coaching world and parted ways with Donald Jackson to work as an engineer, the two reunited for a time when he was coaching at the Peterborough Memorial Centre and Elgin Memorial Arena until the strain of commuting became too much. Bringing things (almost) full circle, Donald Jackson went to England to work with Ede's former coach Arnold Gerschwiler for a time.

Like fellow World Champions Otto and Maria Jelinek, Oleg and Ludmila Protopopov and Ája Vrzáňová who had all also defected from Communist countries to the West following their wins, Ede returned later in life to his home country and found that times had changed. After his 2009 death, the Budapest Skating Club made a proposal to the Hungarian Skating Federation that a new rink be named in his honour. The motion was passed with great applause. Although time doesn't always make up for the wrongs people face during their lifetimes, every so often history gets it right. This was one of those times.

Skate Guard is a blog dedicated to preserving the rich, colourful and fascinating history of figure skating and archives hundreds of compelling features and interviews in a searchable format for readers worldwide. Though there never has been nor will there be a charge for access to these resources, you taking the time to 'like' on the blog's Facebook page at http://www.facebook.com/SkateGuard would be so very much appreciated. Already 'liking'? Consider sharing this feature for others via social media. It would make all the difference in the blog reaching a wider audience. Have a question or comment regarding anything you have read here or have a suggestion for a topic related to figure skating history you would like to see covered? I'd love to hear from you! Learn the many ways you can reach out at http://skateguard1.blogspot.ca/p/contact.html.
Posted by Skate Guard Blog at October 09, 2018
Email ThisBlogThis!Share to TwitterShare to FacebookShare to Pinterest
Newer Post Older Post Home