James Drake Digby, The Founder Of The National Skating Association 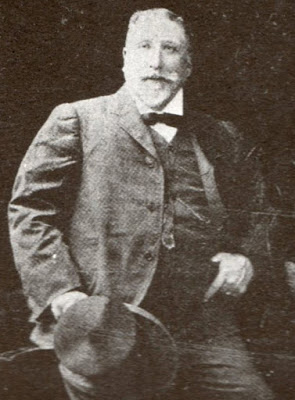 "I am intensely desirious of signalising... radical changes by uniting all the skating forces of the country under one truly National Organisation." - James Drake Digby, "Cambridge Independent Press", December 28, 1894

The second oldest child of William and Ann (Drake) Digby, James Drake Digby was born March 7, 1837 in Walsoken, just northeast of the Fenland market town of Wisbech in Cambridgeshire, England. He and his eight siblings were raised by a live-in nurse and attended the Wesleyan Methodist Church. James' father was a brazier and tinman who crafted metal plates. His younger brother William became a prominent journalist, banker and activist for economic and racial equality in India, Ceylon and Sri Lanka, where he lived for a time.

In his twenties, James married his wife Amelia (Benstead) and worked as a journalist in Wisbech and King's Lynn. In 1859, he founded The University and Sandringham Intelligence Service, one of the oldest news agencies in Great Britain. The organization, later known as the Cambridge Sporting and General News Service, had a label showing that in 1906 King Edward VII personally sent three braces of pheasants from a royal shoot to Newton Digby, James' son.

James moved to Cambridge in 1867 and secured work as a journalist with the "Cambridge Independent Press and Chronicle". He penned society papers about the Royals and the House Of Lords and  was "a familiar figure at all sales of stock belonging to the Prince of Wales at Sandringham" for well over a decade. In order to keep his wife, children and live-in servant in broth, bread and treacle, he supplemented his journalism with a job as the manager of Provincial 'Brush' Electric - Light And Power Company, Ltd. which supplied incandescent lamps to college rooms, shops and private houses.

James' exposure to skating began at Cambridge University's Skating Club, but it wasn't until he was sent to write about the fen skating races in Mepal during the Great Frost of 1878 that his passion for the sport really began. Though inspired by the success of George 'Fish' Smart (one of the leading speed skaters of the day) he was perturbed by the cheating that went on. It was his belief that speed skaters needed a national governing body to curtail betting, standardize race lengths and to determine that "the title of champion skater should be settled by a competent authority". The following year at the Guildhall in Cambridge, he assembled a group of influential Britons and founded the National Skating Association. Named as the Association's first Honorary Secretary under Mayor Neville Goodman, he held that position for nearly twenty years. His indefatigable dedication to British skating during the Victorian era helped set standards and open doors.

Two years after the National Skating Association was founded, James moved to London and met with Henry Eugene Vandervell, a well-respected English Style skater from The Skating Club, to discuss the possibility of developing a Figure Skating Committee. It was through James' appeals that Vandervell and Montagu Sneade Monier-Williams were tasked with setting the first nationally recognized standards in figure skating. James edited the first editions of the National Skating Association's Metropolitan Skating Handbook, judged roller skating contests in London, sat in a sleigh chair and served as a timekeeper at speed skating races in the Fens and perhaps most importantly, used his connections as a journalist and friendship with Member Of Parliament Hayes Fisher to promote figure skating in the British press.

On Christmas Day 1893, James wrote an appeal as a letter to the editor in the "Morning Post" that stated: "I am intensely anxious to see a greater union of effort on the part of all the skating public, and as one of the hon. secretaries of the parent body I am ready to give every help in my power in the formation of branches or the affiliation of existing skating clubs... The interval between the present time and the realization of frost might be profitably employed if a number of enthusiastic skaters would do as I did when the National Skating Association was formed, i.e. call a meeting of all those in their districts known to be lovers of skating, either speed or figure ice or roller, and get a resolution passed as to the desirability of forming a district branch... It is earnestly hoped that members of the Skating Club, Wimbledon, Crystal Palace, Thames Valley, Hampstead, Arctic and other well-known clubs, will co-operate with the National Skating Association in still more popularizing such an excellent sport."

Well aware of the weather's role in hampering the development of skating in Great Britain, James was a supporter of taking skating inside. In 1893, he penned "Skating And Curling: A Brief History of the Invention and The Proposed Glaciarium Club", a book which offered readers valuable information about building and maintaining indoor rinks. The following year he proudly said, "Some of us have laboured very hard for the last 12 years to render skaters independent of the weather, and I am happy to be able to state confidently that there will certainly be at least two real ice rinks in London in the course of a few months, on which speed skating, as well as figure skating, will be possible." 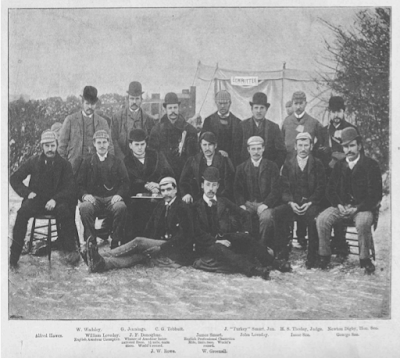 Newton Digby and a group of top speed skaters in 1891

James' efforts extended far beyond the skating world. He and his family were prominent Liberal supporters and organizers. He served as General Secretary of Free Land League and Liberal League, the latter of which he was a founder. He was a supporter of the women's suffrage movement and local option in government. He was once President Cambridge Ratepayers’ Association and founder of the Cambridge Junior Liberal Club, and was also involved in the Sturton Town Liberal Club and Board of Guardians.

James' final contribution to the skating world was his position as the superintendent of National Skating Palace at London's Hengler's Circus. The lavish indoor rink, the extent of which England had never seen before, was hugely popular and became the new headquarters of the National Skating Association. James' work in arranging for Henning Grenander and George Meagher to give exhibitions there generated great interest in figure skating among the Palace's wealthy patrons. His zeal to make the business succeed culminated in an 1896 charge under the 9th section of the Metropolitan Streets Act for "aiding another man to commit the crime of unlawfully carrying a certain board, placard or notice in a form or manner not approved of the Commissioner Of Police." The offending banner was an advertisement for the National Skating Palace and James was fined twenty shillings.

However, James wasn't necessarily beloved or without his enemies. Through her study of the National Skating Association's earliest minutes, BIS historian Elaine Hooper deduced, "He did not always have a cordial relationship with the Association. It became the norm in those days for The Association Chairmen and Secretaries to be awarded honourary Life Membership. This has always been considered an honour to receive and personally I think it is indicative of how his peers perceived him, that as founder of the Association of NSA/NISA/BIS, he was not so honoured. Reading between the lines of our books, I think that Newton may have organised a coup to remove his father as Honourary Secretary in favour of himself."

James passed away on February 16, 1899 at his home at Cambridge House, Weston Park, Crouch End at the age of sixty one after several years of ill health. His wife had passed away less than a year before. He was remembered through the Drake Digby Memorial Shield for fen skaters, a half mile race for boys under the age of sixteen. Very few members of the skating community attended his funeral, but one tribute - a pair of skates joined in a cross, encircled by lilies - gave a nod to his important contributions to skating in England.

Skate Guard is a blog dedicated to preserving the rich, colourful and fascinating history of figure skating. Over ten years, the blog has featured over a thousand free articles covering all aspects of the sport's history, as well as four compelling in-depth features. To read the latest articles, follow the blog on Facebook, Twitter, Pinterest and YouTube. If you enjoy Skate Guard, please show your support for this archive by ordering a copy of the figure skating reference books "The Almanac of Canadian Figure Skating", "Technical Merit: A History of Figure Skating Jumps" and "A Bibliography of Figure Skating": https://skateguard1.blogspot.com/p/buy-book.html.
Posted by Skate Guard Blog at February 05, 2019
Email ThisBlogThis!Share to TwitterShare to FacebookShare to Pinterest
Newer Post Older Post Home