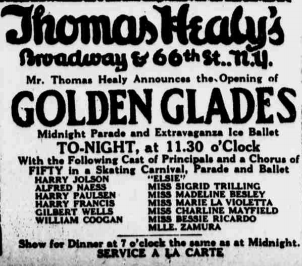 "Skate for beauty and not so much for business. The seriousness of mastering technique is one thing, but the lissomeness and grace of a figure in abandon to time rhythm is what elevates skating to the highest form of poetry of motion." - Gladys Lamb, December 30, 1915

The Great War may have been raging overseas in Europe, but in 1915, social life in New York City was buzzing with electricity. At Rector's on 48th Street, diners could take in a meal, two orchestras and a comedian for whopping dollar and seventy five cents. Murray's on 42nd Street competed with a seventy cent lunch and a revolving dance floor. Owing in part to the popularity of Charlotte Oelschlägel's performances at The Hippodrome, skating was hugely popular in the city at the time and it was only natural that several enterprising nightclub owners cashed in on the craze. In 1915, The 44th Street Theatre installed an Ice Palace in its latticed rooftop 'Bull Ring' dance floor and stage area. They opened the rink in the afternoons to theatre patrons who brought their own skates and by the next year, added skating performances as a novelty act to their popular Castles In The Air vaudeville shows. 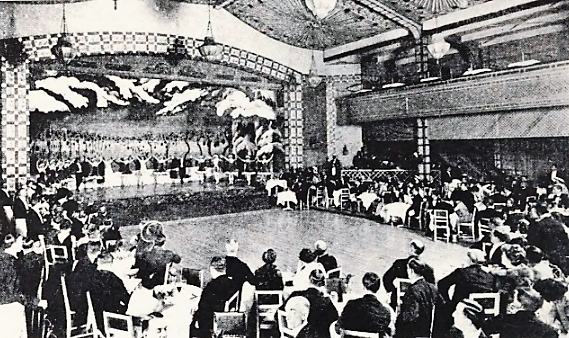 Castles In The Air at the 44th Street Theatre

In 1916, Thomas Healy installed an ice rink atop the Golden Glades restaurant on the northeast corner of Columbus Avenue and West 66th Street. The four story building had been a popular spot since the nineteenth century and was known for its lavish menus. Peter Salwen's "Upper West Side Story: A History and Guide" noted Egyptian quail, French partridge, English partridge and three kinds of duck were served - but in no time flat the hottest thing on the restaurant's menu were the ice shows on the roof. The very first Golden Glades 'Midnight Parade and Extravaganza Ice Ballet' show was held on Saturday, December 2, 1916 at 11:30 PM. 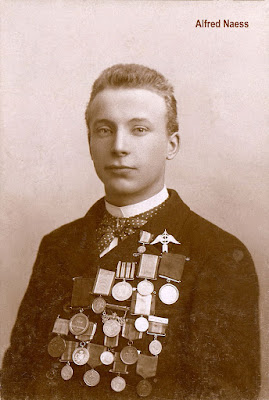 Following an a la carte dinner earlier that evening, World Speed Skating Champion Karl Alfred Ingvald Næss and five time Norwegian Figure Skating Champion Harry Paulsen headlined a cast of skaters, dancers in a variety style show that included everything from singing to figure skating to a demonstration of ice hockey. The audience was enthralled, erupting into spontaneous applause while they guzzled back gin rickeys and spiked raspberry ices. 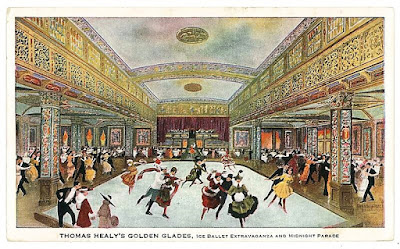 The show was an instant hit and soon the rooftop ice rink was (like at the 44th Street Theatre) opened in the afternoons for public skating before a suppertime and midnight ice show. The venue was often dangerously overcrowded and bookings for private parties came pouring in. By 1917, Thomas Healy was presenting Golden Glades diners with 'Summer Ice Skating Ballets' in June and July starring Margot Georges, a skater at The Hippodrome. 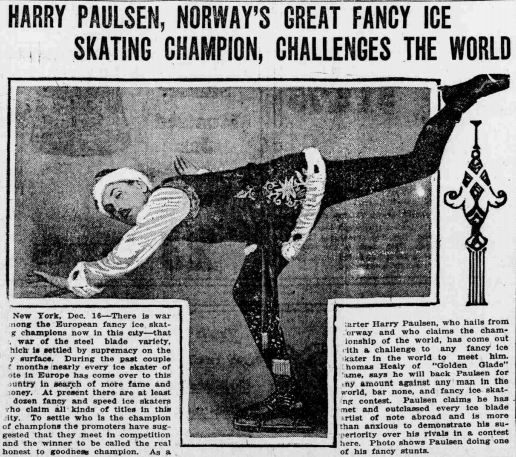 How did Thomas Healy pack his joint with skating fans so quickly? Why, with the help of a crack PR team! He employed the St. Nicholas Rink's publicity director - a young writer by the name of Bide Dudley - who had a habit of (ahem) embellishing the truth to get people in the door. A shining example of Dudley's handiwork is this gem from the March 11, 1917 issue of The Sun: "Harry Paulsen, one of the premiere skaters at Thomas Healy's Golden Glades, will introduce [in his] performance the sensational 'Bell Jump,' a trick which has already cost the lives of a score of European exhibition ice gliders. A miss is considered almost sure death. It is done by a tremendous leap and a clicking of the skates together, then landing on the ice and spreadeagling until the impetus of the motion ceases." If a waltz jump, a clicking of the heels and a spread eagle is 'almost certain death', I guess I should be writing this blog from beyond the grave. I digress. 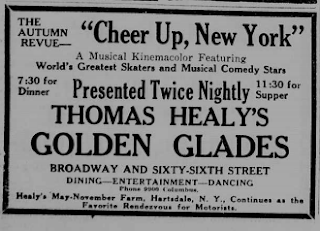 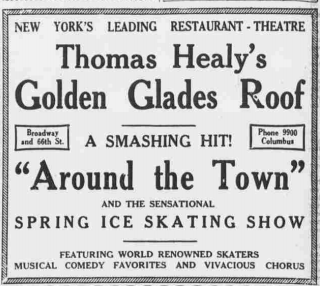 Over the next two years, Thomas Healy beefed up the cast of his shows with special guests like Norval Baptie and Gladys Lamb, Laura Jean Carlisle, Ellen Dallerup, William P. Chase and Cathleen Pope. He staged a new combination musical/skating revue in the spring of 1919 called "Blossom Festival" which was so popular it was extended into the summer months. A costume designer was hired to dress the skaters to the nines and a composer was brought in to write music specifically for chanteuses Helen Hardick and Peggy La Velle to belt out while standing on rugs laid on the ice in between skating performances. An account from the July 27, 1919 edition of "The Sun" noted, "Diners sitting in semicircle at tables around an ice skating stage can order their food or drink at their pleasure while 'Blossom Festival,' the only ice skating show in the East is being presented." That autumn, "Blossom Festival" was replaced by a show fittingly called "Cheer Up, New York". The show's name pleaded to Big Apple residents to forget their wartime woes by watching skating until the wee hours of the morning. "The New York Tribune" called it "the best in the series" and matinee performances were added that winter. The show was even staged on Christmas Day and New Year's Eve. 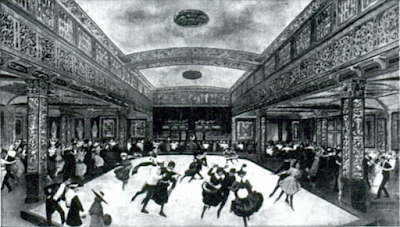 By 1920, it was all over. As the liquor dried up with prohibition laws in place, patrons flocked to speakeasies and not even Dudley's creative PR skills could fix the mess of a restaurant devoid of sweet, sweet gin. Thomas Healy tried abandoning the ice shows, then bringing them back, but nothing worked. He finally ditched the rooftop skating shows in the spring of 1922 and converted the Golden Glades into a series of banquet rooms. The main floor restaurant passed into control of two of his former employees and the building's Balconades Ballroom was converted into a dance hall run by his orchestra man. Like the olive in the bottom of a martini, Healy was sunk... 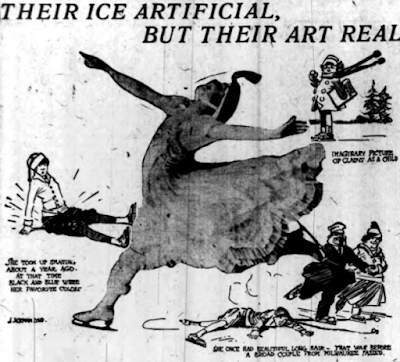 Or so it seemed! During the heyday of the Golden Glades' rooftop ice spectaculars, Thomas Healy acquired the lease of the Old Astor Market which spanned Broadway from 95th to 96th Street. On the site, he had briefly attempted an ice rink called the Crystal Palace. It had failed miserably so he converted an old fish market into restaurant there instead and called it the Sunken Galleries. He found a new business partner in fellow restauranteur John Wagoner and decided to fire up the venue's old ice plant and revive the same combination of stage and skating shows at the Sunken Galleries that had worked atop the Golden Glades. Although they do say that beating your head against the same wall and expecting different results is the definition of insanity, there was some logic to Healy and Wagoner's plan. The restaurant was in the heart of the uptown theatre district, so he would be more easily able to grab theatre patrons as they were coming and going more easily. Sadly, this second effort quickly failed too and the Golden Glades, once home of marvellous skating and martinis, burned to the ground in a fire. The moral of the story? Skating shows without booze just do not mix.

Skate Guard is a blog dedicated to preserving the rich, colourful and fascinating history of figure skating and archives hundreds of compelling features and interviews in a searchable format for readers worldwide. Though there never has been nor will there be a charge for access to these resources, you taking the time to 'like' on the blog's Facebook page at http://www.facebook.com/SkateGuard would be so very much appreciated. Already 'liking'? Consider sharing this feature for others via social media. It would make all the difference in the blog reaching a wider audience. Have a question or comment regarding anything you have read here or have a suggestion for a topic related to figure skating history you would like to see covered? I'd love to hear from you! Learn the many ways you can reach out at http://skateguard1.blogspot.ca/p/contact.html.
Posted by Skate Guard Blog at May 28, 2019
Email ThisBlogThis!Share to TwitterShare to FacebookShare to Pinterest
Newer Post Older Post Home