There's nothing I enjoy more than rolling up my sleeves, digging deep in the archives and piecing together the puzzle pieces to share stories from ice skating history from all around the world. Well, maybe there's one thing I love more... and that is hearing how these stories speak to the people who are reading them. Over the last six months, I have received countless e-mails and messages on Twitter and Facebook.

In today's blog, I want to once again answer some of your questions and share with you a small sampling of reader mail - much of it connected to several of the blogs in the archives and some relating to topics that haven't even been covered.

Q: From Aleksa (via e-mail): "Who was the first skater to do a triple Axel?"

A: David Jenkins, the Olympic Gold Medallist in 1960, was landing triple Axels in practice in the fifties, but he didn't include the jump in his program. He didn't really need to as none of his competitors were taking those kinds of risks! The first skater to successfully land it in international competition was Vern Taylor, at the 1978 World Championships. The first woman to do so was Midori Ito, at the 1988 NHK Trophy in Japan.


Q: From Carol (via Twitter): "Who invented the twist in pair skating?"

A: A historian once warned me about how irresponsible it is to say someone was 'the first' because with a little more digging, you usually find an earlier example... but the consensus seems to be that Frances Dafoe and Norris Bowden introduced the twist (with a Lutz entry) in the early fifties. Debbi Wilkes and Guy Revell did a double in the early sixties and by the late seventies, the Soviet pair of Marina Cherkasova and Sergei Shakrai were rotating a quad. As one might imagine, there were a lot of broken noses and bruised heads along the way.

Q: From James (via e-mail): "Is there a reason why skaters don't do a loop more often as the second jump in their combination in the short [program]?"

A: Yes. Because it's harder! I guess you could say skaters today are lucky. Back in the eighties, the required elements in the short program changed significantly from year to year and the loop was often required. You saw more variety in the combinations, and skaters had to play to their strengths deciding whether to do, for instance, a double loop/triple toe-loop or triple Salchow/double loop.

From Jim (via e-mail): "I read your Skate Guard article written on my cousin Roger Wickson and his brother Malcolm Wickson. It was well written and it is posted it on my Wickson family Page on Facebook. Some other information on Malcolm, also a skater: Malcolm C.J. Wickson was born at Vancouver in 1933. Educated at the University of British Columbia, he was admitted to the B.C. Bar in 1957. In addition to practising law in Vancouver, he was involved in real-estate development and financing. Starting in 1949, he was also active in the B.C. Progressive Conservative Party. In 1964 he was elected as the provincial party`s director. Two years later, he became vice-president. In 1967 he was elected as party president. In 1968 Wickson's political activity began to shift to the national scene. From March 1968 to October 1970 he served as national director of the federal Progressive Conservative Party. During his tenure, he borrowed new ideas from the Republican Party in the United States and the Conservative Party in Britain, introducing several innovations in the management and administration of the P.C. Party and re-organizing its fund-raising activities. He also introduced significant changes relating to public-opinion research, policy development, and long-range campaign planning. In 1971 Wickson joined the committee responsible for planning the Tory’s successful campaigning the Ontario provincial election. The following year, national P.C. leader Robert Stanfield appointed him as the director of operations for the party's federal campaign. Under Wickson's guidance, the federal Tory campaign in 1972 reflected many of the lessons learned the year before in Ontario and drew upon the resources of Ontario’s Big Blue Machine. In 1974 Wickson rejoined the Stanfield team as national campaign chairman. Following the Tory’s defeat in the 1974 election, he remained active as a member of the federal party's Treasury Committee (1976-1977). He also served on the Convention Committee that planned the Conservative’s 1976 leadership convention. After 1977, Wickson's focus shifted from backroom politics to his business concerns. He died at Vancouver in 1988."

From Ron (via e-mail): "I met Arthur Apfel when I was about 23 years old. I took lessons from him, but we became very good buddies. We went to Durban together on holiday. He was a wonderful man. I also met his Mum and Dad... lovely people. I was sad to hear that he died, but we all have to go. I am eighty four. I was in an ice show in 1952... Tom Arnold's ice revue. Arthur skated in it. He did his spinning act, and oh boy, could he spin. R.I.P. my very good old friend."

LOOKING FOR PHOTOS OF KAREN WOOD 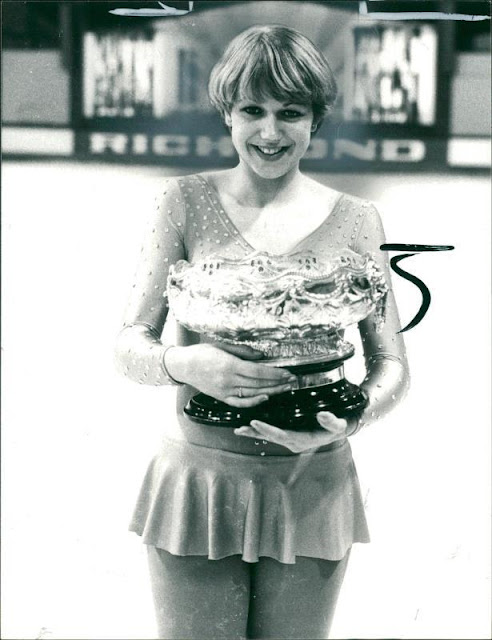 From Nicole (via e-mail): "My name is Nicole and I am the daughter of Karen Wood who was a well known Ice Skater. She sadly passed away in 2014. I saw a couple of photographs of my Mum on your website and I was wondering whether you had anymore that you would be able to share with me as I do not have many pictures of my Mum from when she was younger. If you could get back to me about this that would be great."

I've shared ten photos of Karen I found, which came from a British newspaper archive from the seventies, eighties and nineties. If anyone has any photos of Karen in their personal collections, feel free to send them my way and I'll pass them on! 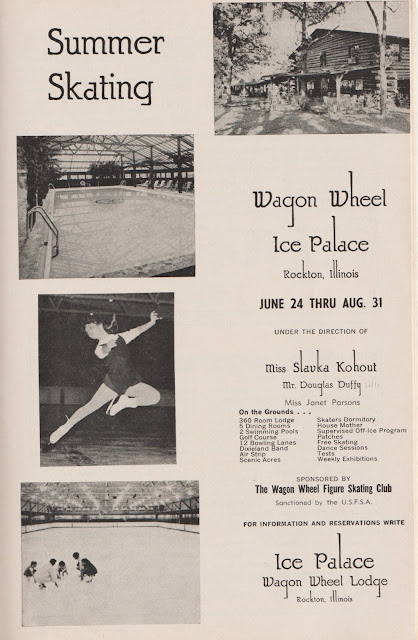 For several years, Daisy Mae has been researching the life of her birth mother, who toured with several ice revues in the forties. She recently forwarded me a list of Canadian skaters she is interested in learning more about. The only skater whose name rung a bell was Douglas Duffy, who I knew was an ice comedian who skated an act with a life size doll. He coached at the Wagon Wheel Figure Skating Club alongside Slavka Kohout in the sixties. If anyone has any information about the others, please send it my way and I'll gladly pass it on.

From Daisy Mae (via Facebook): "Red Sisley; character skater also known as the Mad Russian. He was also a barrel jumper skater. Gracie May, very attractive blond. Married name Homan. Born 1918
Margie Petaja. Harry Douglas Canadian hockey star turned comic skater. Leaped over five barrels.
Alice Quessy, Holiday on Ice Star and came to Detroit to set up a skating school. Charlotte had her phone number in her little black phone book. Oscar Klausen, Jewish dealer of antiques, Detroit, Charlotte skated doubles with him. He was an old man still skating at 80. Douglas Duffy, from Nova Scotia, Canada. He was in Ice Melodies of 1946. He landed in New York in 1935 and skated with  Sonja H. in 1936. In 1940, he went to Cuba as a skater and promoter and was in a Ice show in January 1940 as the All American Ice Carnival in Atlanta ,GA at the classy Roxie Theatre."

From Chris (via e-mail): "I have just encountered your article regarding the above cousins who were ice-skaters, Anne who's fate ended her passion for figure-skating and her cousin Elias, who having survived WWII went on to become a successful ice-skater with the show 'Dancing on Ice' (which I remember watching with my Mum on T.V. in the 1960's!) I am currently writing a words-and-music project on the Diary of Anne Frank, hence the discovery of yourself whilst doing Google research. Ironically, I have recently begun beginners ice-skating classes and today purchased a pair of ice-skates. Serendipitous moments do make life so interesting!"


Skate Guard is a blog dedicated to preserving the rich, colourful and fascinating history of figure skating and archives hundreds of compelling features and interviews in a searchable format for readers worldwide. Though there never has been nor will there be a charge for access to these resources, you taking the time to 'like' on the blog's Facebook page at http://www.facebook.com/SkateGuard would be so very much appreciated. Already 'liking'? Consider sharing this feature for others via social media. It would make all the difference in the blog reaching a wider audience. Have a question or comment regarding anything you have read here or have a suggestion for a topic related to figure skating history you would like to see covered? I'd love to hear from you! Learn the many ways you can reach out at http://skateguard1.blogspot.ca/p/contact.html.
Posted by Skate Guard Blog at June 04, 2019
Email ThisBlogThis!Share to TwitterShare to FacebookShare to Pinterest
Newer Post Older Post Home