A Selection Of Scandinavian Stars 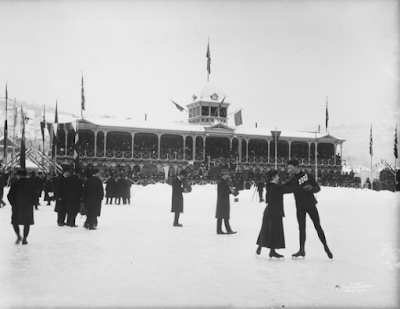 In the first half of the twentieth century, talented athletes from Scandinavian countries dominated the world's figure skating scene. Sonja Henie, Gillis Grafström, Ulrich Salchow and Magda (Mauroy) Julin all won Olympic gold medals and the skating clubs of Stockholm, Oslo, Copenhagen and Helsinki all played host to international skating competitions where defining moments in the sport's history played out. In today's blog, we'll look back on the stories of some forgotten Scandinavian skating stars who rose to prominence during this period. 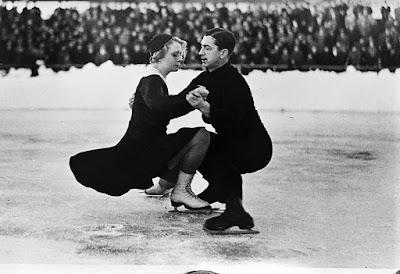 Born less than a month apart in the autumn of 1904, Randi Bakke and Christen Christensen learned to skate at the Oslo Skøiteklub and rose to prominence as one of Norway's top pairs teams in the twenties and thirties. They placed a disappointing last in their first appearance at the World Championships in 1923 but went on to win an incredible eight consecutive Norwegian pairs titles from 1929 to 1936. In Stockholm in 1931, they became the second pair in history from their country to win a medal at the World Championships. They retired in 1936, after placing a disastrous fifteenth at the Winter Olympic Games in Garmisch-Partenkirchen. Christen served on the board of the Norges Skøyteforbund for nearly a decade, ran a radio shop in Oslo and passed away on June 2, 1969 at the age of sixty-four. Randi married and moved to Nesodden, where she passed away on on May 21, 1984 at the age of seventy-nine. 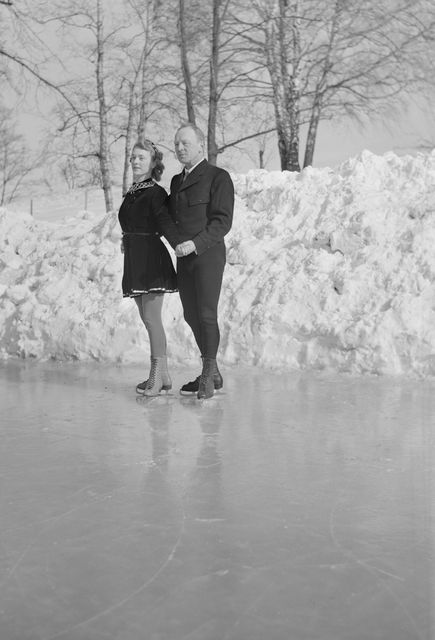 Born August 25, 1886 in Mikkeli, then part of Russian Finland, Edvard Ferdinand Linna first rose to prominence as a gymnast, winning the bronze medal in the men's team event at the 1908 Summer Olympic Games in London, England. In the roaring twenties, he won the Finnish pairs title as a figure skater three times with Olga Saario, who had once skated with Walter Jakobsson.

Edvard served as the chairman of Suomen Taitoluisteluliitto and on the board of the Finnish Olympic Committee and won the Finnish pairs title in 1938 and 1939, skating with his daughter Hilkka, who was born on September 24, 1919. In the fifties, Edvard and his wife Ingeborg's other daughters Kirsti and Riitta took turns winning the Finnish women's title.

Hilkka passed away on July 10, 1956 at the age of thirty-seven; Edvard died on December 30, 1974 at the age of eighty-eight. Though they never competed at the European or World Championships, the Linna's held the distinction of being one of the very few father/daughter teams to win a national title. 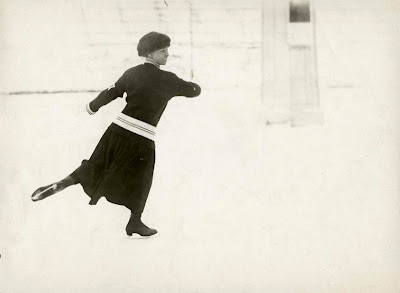 The daughter of Fanny (Thiele) and Jean Charles Valdemar Krayenbühl, Alice Johanne Krayenbühl was born January 28, 1895 in Frederiksberg, Sweden. She grew up in Copenhagen and her father was a civil engineer. An athletic young woman, Alice was perhaps better known for her prowess on the tennis courts in the summer than on the ice in the winter. She dominated the Danish sporting scene from 1915 to 1920, winning seven back-to-back national titles in indoor and outdoor tennis. 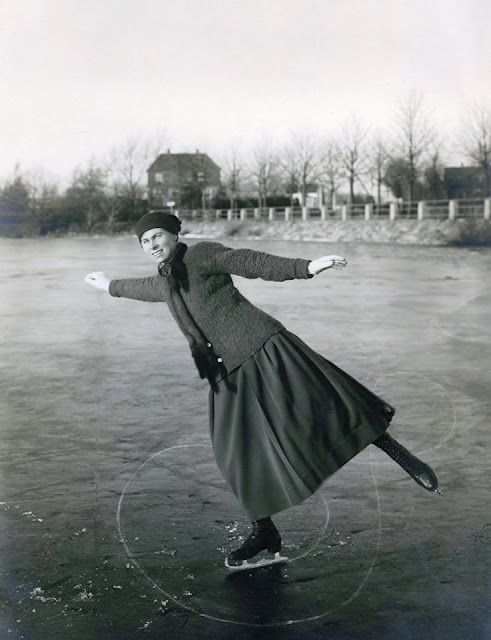 As a skater, Alice represented Denmark at the Nordic Games and was her country's champion in 1917, 1922 and 1924. She likely would have won more titles had the weather not forced the cancellation of the Danish Championships several times during this period. While competing, Alice was a student at the College Of Advanced Technology, today known as the Technical University Of Denmark. She graduated in 1922 and found work at the Laboratory of Mortar, Glass and Ceramics. She married composer and music historian Knud Jeppesen in 1923.

Alice's granddaughter Nina Frederike Jeppesen Edin explained, "My grandmother Alice Krayenbühl... was employed at the Laboratory of Mortar, Glass and Ceramics at the same university for about ten years. About 1932 she got tuberculosis. She was in a sanatorium for several months (I think almost a year) and I think that put a stop to her sports as well as her career. After that she (in addition to raising a son) devoted her time and resources to helping my grandfather in his career as a professor in musicology and composer. They lived for longer periods in Italy, where she helped him take microphotographs of manuscripts from libraries in Firenze and the Vatican. She was also quite a good painter and artist. When my grandfather died in 1974, she took up many of these interests." Alice passed away on January 19, 1987 at the age of ninety-one.

In the first half of the twentieth century, no family arguably made a greater impact on figure skating in Sweden than the Palm's. Hildour and Johanna (Hagström) Palm hailed from the medieval agricultural parish of Kvillinge, north of Norrköping, in Östergötland. Hildour was a stonework engineer by trade and the snowy, somewhat remote area where he raised his family proved the idyllic backdrop for a family of winter sports enthusiasts.

Hildour and Johanna Palm had at least six children, all of which took up the sport of figure skating in their youth. Gunvor, born September 22, 1904 and Solvig, born January 18, 1906, were by accounts fine skaters. Gunnar, born December 27, 1901 and Henry, born in 1897, served as board members at the Stockholms Allmänna Skridskoklubb, the home base of skating legends like Ulrich Salchow and Gillis Grafström. Gunnar, an artist by trade, served as a judge at the 1939 World Championships.

The skating career of Anders Palm, born May 27, 1900, spanned nearly two decades. Paired with Margit (Edlund) Josephson, he won his first of three Swedish pairs titles in 1926 and his last in 1935. The couple twice represented Sweden at the World Championships but had the unfortunate distinction of placing dead last on both occasions. 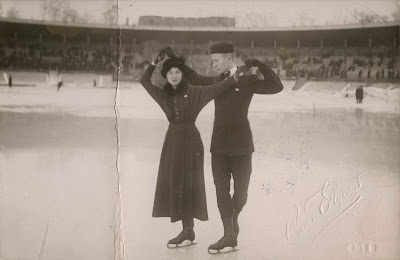 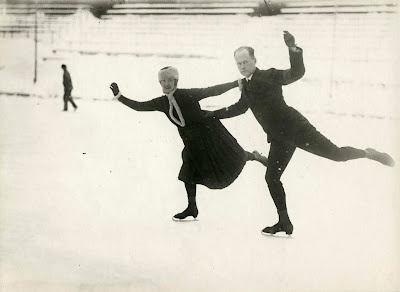 The most famous of the skating siblings were Helfrid (Palm) Berghagen, born July 9, 1891, and Agard Palm, born October 23, 1892. Helfrid and Agard began their skating career in the late Edwardian era and won the Swedish pair title five times consecutively from 1915 to 1919. Had the World Championships not been cancelled for the duration of the Great War, they would have certainly been medal contenders. 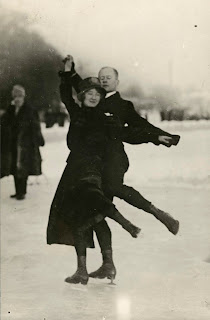 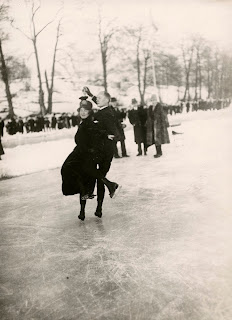 Helfrid and Agard claimed the Swedish pairs title for a sixth and final time in 1922, defeating Elna Henrikson and Kaj af Ekström - who went on to win the bronze medal at the World Championships in 1923 and 1924. During the Great War, Agard penned the popular book "Konståkning på skridskor". Though mainly instructional, the book also touched on figure skating's history and included a copy of the ISU's rules at the time. Late in his skating career, Agard also served on the board of the Stockholms Allmänna Skridskoklubb. He passed away in 1969 at the age of sixty-nine, leaving behind a wife and two children.

Skate Guard is a blog dedicated to preserving the rich, colourful and fascinating history of figure skating and archives hundreds of compelling features and interviews in a searchable format for readers worldwide. Though there never has been nor will there be a charge for access to these resources, you taking the time to 'like' the blog's Facebook page at http://www.facebook.com/SkateGuard would be so very much appreciated. Already 'liking'? Consider sharing this feature for others via social media. It would make all the difference in the blog reaching a wider audience. Have a question or comment regarding anything you have read here? Have a suggestion for a topic related to figure skating history you would like to see covered? I'd love to hear from you! Learn the many ways you can reach out at http://skateguard1.blogspot.ca/p/contact.html.
Posted by Skate Guard Blog at September 09, 2021
Email ThisBlogThis!Share to TwitterShare to FacebookShare to Pinterest
Newer Post Older Post Home