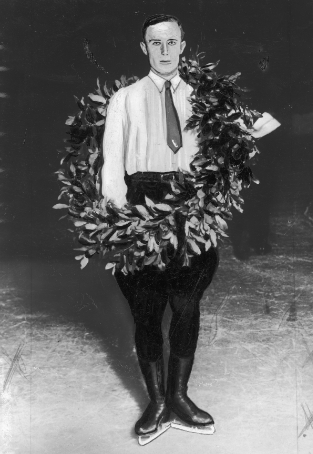 Held from February 28 to March 1, 1931 at the Berlin Sportpalast in Germany, the 1931 World Figure Skating Championships marked only the second time in history the ISU presented the World Championships in men's, women's and pairs skating in the same place at the same time.
Though the Nazis hadn't yet officially seized control of Germany, they were very much a presence in the country at the time. It wasn't all roses on the ice either. An article published in the "Wiener Sporttagblatt" on the opening day of the competition noted that many visiting skaters complained that they were not given ample time to become accustomed to conditions in the rink. This was because German skaters - even those not participating in the competition - were given preferential treatment. 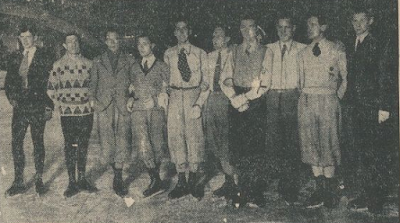 Though attendance was comparably poor for the school figures, more than eight thousand people showed up to watch the free skating competitions that year, which started at five o'clock in the evening. The March 2, 1931 issue of the "Wiener Montagblatt" reported, "It was a frightful place. The driveway of the cars lasted for hours and the air was stagnant. The start of the contest was delayed by this, but moreso because of the non-presence of some of the pieces of music the skaters were to use." Sweden's Gillis Grafström, opting not to compete, gave a special exhibition for the Berlin audiences. He performed several dances he had adapted to the ice. 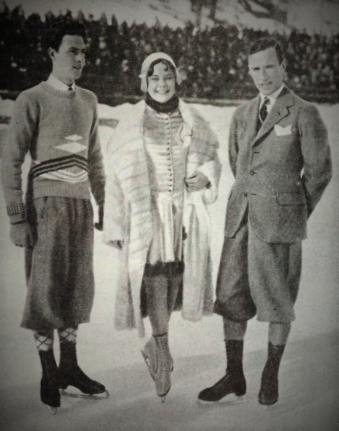 By this point in time, the Austrian press had all but given up on Fritzi Burger and Melitta Brunner, whose previous attempts to dethrone Sonja Henie had been unsuccessful. Their attention - and the eyes of the skating community - were focused squarely on little Hilde Holovsky, who was being hailed as the new rising star in the sport.
Let's take a look back at how Henie, Holovsky and the rest fared that year in Berlin! 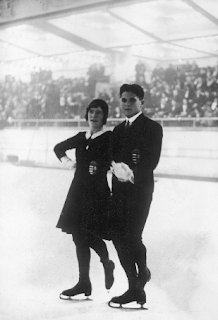 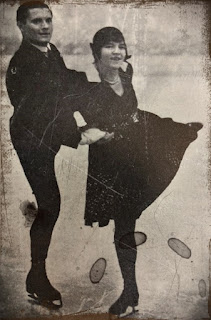 Nine teams vied for the 1931 World pairs title in Berlin and quite frankly, the results were all over the place. Turning the tables after that year's European Championships in St. Moritz, Hungary's Emília Rotter and László Szollás managed to narrowly defeat their teammates Olga Orgonista and Sándor Szalay by just one ordinal placing.


One judge tied the two teams, three gave Rotter and Szollás the nod, two preferred Orgonista and Szalay and Finnish judge Walter Jakobsson had Austrians Lilly Scholz and Willy Petter first. In an equally close contest for the bronze, Scholz and Petter lost out to their Austrian teammates Idi Papez and Karl Zwack. The only non-European team to participate, Maribel Vinson and George 'Geddy' Hill
placed a creditable fifth. Otto Kaiser, who won the World title with Lilly Scholz in 1929, finished eighth with his new partner Hansi Kast. 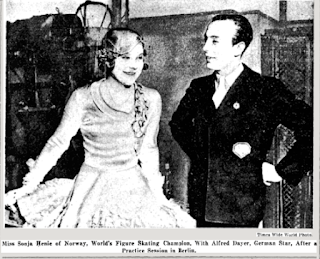 Ernst Baier and Sonja Henie at a practice session in Berlin

An unlucky thirteen men squared off in Berlin in what was perhaps one of the most erratically judged men's events in the history of the European Championships. Karl Schäfer's victory was a decisive one, though the marks of the only judge to place him second offer the first glimpse into exactly how nutty the judging in Berlin that year was.
In one of the blatant displays of national bias ever, the Czechoslovakian judge had his own skater, Josef Slíva, first. Slíva actually finished twelfth - second to last - and no other judge had him higher than ninth in either the figures or free skating! But no, the fun didn't stop there. America's Roger Turner, who claimed the silver, was eighth on the German judge's scorecard. Germany's Ernst Baier, who claimed the bronze, was only seventh best as far as the Austrian judge was concerned. Dr. Hugo Distler of Austria, who placed fourth, had marks ranging from second through eighth. Germany's Leopold Maier-Labergo's marks ranged from second through seventh. Hungary's Marcell Vadas, who ended up sixth, had marks ranging from third through eleventh. If it were up to the judges from Hungary, Great Britain and Czechoslovakia, Finland's Marcus Nikkanen would have won the bronze. Instead, he finished seventh! In hindsight, I think it's safe to assume that at least a few of the men on that year's judging panel got into the Riesling. 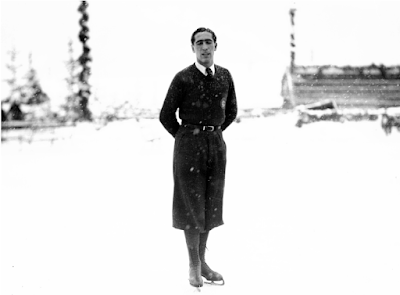 How did they skate? The March 2, 1931 issue of the "Wiener Montagblatt" offered a detailed account of many of the men's free skating performances: "The first was (Marcus) Nikkanen (Finland), who made many mistakes and disappointed. His pirouettes were good, but his jumps were not pure. [Leopold] Maier-Labergo (Berlin) was characterized by his elegant attitude. His program was nicely arranged together, if not too difficult. [Karl] Schäfer brought the rink to a frenzy... He performed all manner of skating elements, jumping, turning pirouettes, dancing and developing an unprecedented musical feeling. He skated to an American piece of music and his program didn't have the smallest mistake. His performance was the highlight of the night."
The report continued: "[Marcell] Vadas, skating after Schäfer, appeared somewhat nervous and fell. Dr. [Hugo] Distler skated very softly and musically, but once touched the ice with his hand. He was uncertain and nervous for no reason at all. [Herbert] Haertel (Berlin), a splendid skater, performed very well despite a fall. [Rudolf] Praznowsky (Troppau) partly copied Schäfer quite well, but was far from the skater his great role model who lived far away was.  Theo Lass (Berlin), for the first time in such a large competition, skated very musically. [Josef] Slíva (Czechoslovakia) skated to a brisk march. He was the best in pirouettes but also his dancing steps were pleasing. After an Axel Paulsen, he came to fall." The Austrian reporter covering the competition offered no observations of Roger Turner, Ernst Baier, Pierre Brunet or George Hill's performances. 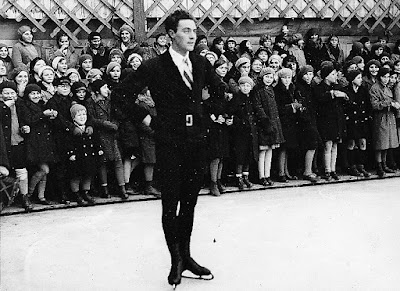 However, Maribel Vinson, covering the event for "Skating" magazine, did. She remarked, "[Baier's] figures no doubt due to an attack of grippe the week before, were not as good as I have seen him do [but] next to Schäfer [he] did the most spectacular free skating of the evening. His countrymen gave him tremendous applause and well they might. His program was fireworks, skated without error and at high speed. Both Americans were among the last to skate... [They] made their impression and gained their applause by their evenly skated, flowing, graceful programs rather than by staccato jumps, toe point jumps, twists, spins and dances. Geddy skated his best and did an excellent inner spin. Roger, too, did himself proud, skating with more ease and poise, sureness and grace than ever before. He gave the audience the feeling that night that he was a seasoned campaigner and couldn't possibly make a mistake. All the American in Berlin were very proud of both of them." 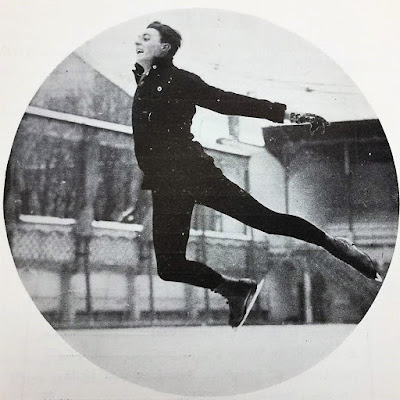 Following the event, Roger Turner - who had chivalrously declined money for travel expenses from the USFSA so that Maribel Vinson could have more - shared his thoughts on the event in "Skating" magazine: "One of my first impressions of the World Championships which were recently held in Berlin, Germany, was the exhaustive enthusiasm of the press for acrobatic skating. It would be unfortunate if the exponents of the Art should acquire an indelible image on their minds of acrobatics... rather than a free and harmonious expression... There is danger, if perverted opinions predominate of losing much of the glory and fineness of the present style and figure skating, like the Russian ballet which has given way to a coarser school, would decline." 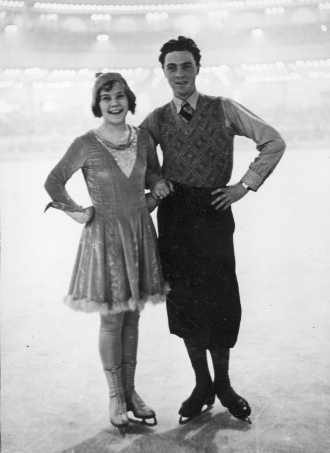 Dr. W.L. Hildburgh, the American judge in the women's event, stirred the pot considerably with his marks in Berlin. Not only did he place both Maribel Vinson and Vivi-Anne Hultén ahead of Sonja Henie in the school figures, he put Austria's Hilde Holovsky ahead of the Norwegian darling in the free skate. Let's just say the man certainly didn't get a Christmas card from Norway that year! 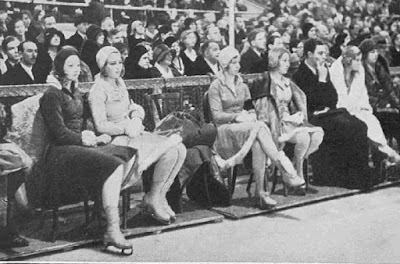 Despite the best efforts of one renegade Yankee Doodle doctor, Sonja Henie pulled off a decisive victory in Berlin but many agreed that she was upstaged in the free skate by silver medallist Holovsky. Losing ground to Maribel Vinson in the free skate, Fritzi Burger dropped from second to third overall. Hultén placed fifth behind Vinson when the Norwegian judge - Sonja's judge - placed her second to last in the free skate. Let it suffice to say the Swedish press was not amused. However, American coverage of the event was quite favourable towards Sonja Henie. In a report penned for "Skating" magazine, George Hill remarked, "For the fifth time Sonja Henie was won the Ladies' Championship of the World, and it seems to me she can continue for many years. She is more than a skater, she is an artist... Her figures were executed almost flawlessly... Her spins were astonishing... longer and faster than ever and finished on the inner edge in beautiful position." 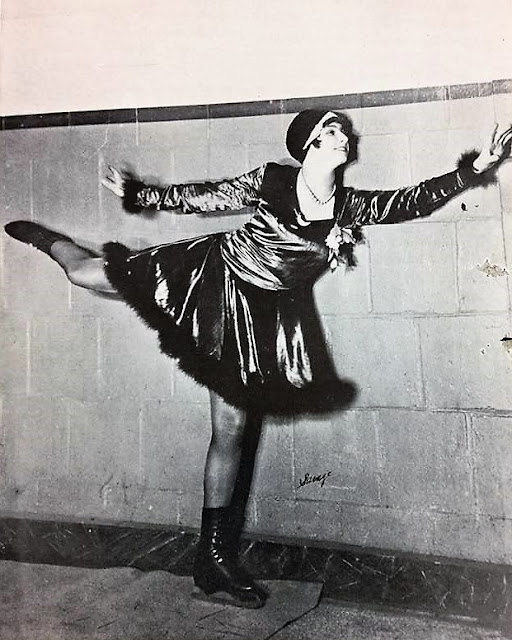 The March 2, 1931 issue of the "Wiener Montagblatt" offered a detailed account of the women's free skating performances in Berlin: "The first to skate was de Ligne (Belgium), who impressively skated a technically perfect, but not too heavy program. The Norwegian [Randi] Gulliksen skated musically but left no special impression. [Maribel] Vinson (America) was very pleasing. Her program was very pretty with some good original dance moves and her pirouettes also caused a great deal of applause... [Nanna] Egedius (Norway) brought a fairly light program to the event, then came Fritzi Burger (Vienna) in a pale pink dress. She skated completely flawless and purely... Even [Edel] Randem (Norway) had some pretty moments in her program though she had too little momentum and no tempo. Sonja Henie, in a turquoise blue dress, by her skating long ago a favourite of the Berliners, brought her usual program, the one from Vienna. Her jumps were particularly effective and she skated with wonderful security... [Vivi-Anne] Hultén (Sweden), who had to go after Sonja, fell, understandably... She did very beautiful things, dance steps which she learned from Grafström but lacked in temperament. Hilde Holovsky, with an entirely fabulous skate, almost surpassed the insurpassable performance of the famous Norwegian girl. With unlikey speed and mastery, each figure was executed. Her jumps were high and flawless. Her impression was overwhelming, and the Sportpalast broke out in cheers." 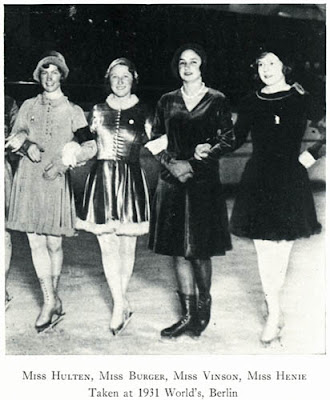 Following the competition, ISU and government officials gathered with skaters at a banquet held at the Hotel Esplanade on Potsdamer Platz, which was frequented by stars like Charlie Chaplin and Greta Garbo in the roaring twenties. Prizes were awarded, Spätburgunder flowed freely and Karl Schäfer received a special award from the German Minister of Foreign Affairs. Sonja Henie - furious about  rumours saying she planned to turn professional - allegedly had an outburst at her hotel, slammed her door and locked herself in a room for a while. She came out eventually and won two more Olympic gold medals and five more World titles.

Skate Guard is a blog dedicated to preserving the rich, colourful and fascinating history of figure skating. Over ten years, the blog has featured over a thousand free articles covering all aspects of the sport's history, as well as four compelling in-depth features. To read the latest articles, follow the blog on Facebook, Twitter, Pinterest and YouTube. If you enjoy Skate Guard, please show your support for this archive by ordering a copy of figure skating reference books "The Almanac of Canadian Figure Skating", "Technical Merit: A History of Figure Skating Jumps" and "A Bibliography of Figure Skating": https://skateguard1.blogspot.com/p/buy-book.html.
Posted by Skate Guard Blog at January 04, 2023
Email ThisBlogThis!Share to TwitterShare to FacebookShare to Pinterest
Newer Post Older Post Home