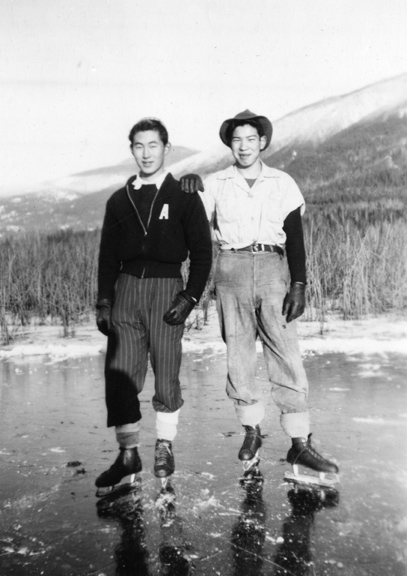 Ari Furukawa and Tsutomu Tom Kimoto skating in Slocan, British Columbia, circa 1945. Photo courtesy Nikkei National Museum.
"I have... gone skating several times... I really did have fun. We used to walk all the way down to the lake to go skating. The scenery around there is just beautiful!" - Handwritten letter from Kimi Yamamoto, a student at the Tashme Evacuation Center, 1943
When Barbara Ann Scott was busy practicing double Salchows and double threes during World War II, over ninety percent of the Japanese Canadian population were being forcibly relocated to internment camps. Families were separated; houses were confiscated and sold. Men were forced to toil away on farms and do back-breaking road work.
Behind the high wire fences that separated the detainees from the rest of the world, some chose skating as an escape from the harsh reality they were facing. An excerpt from the January 16, 1942 issue of "The N.C.", quoted in Yon Shimizu's "Exiles", stated, "When the extreme cold sets in, they have very little to do. However, these young men recently solved the problem by building a skating rink on the ball ground, sprinkling water over the entire surface. The older men find skating very hard to master, but the young men are deriving much enjoyment from this winter. Haruo Murata seems to be the ace skater of the lot, followed by his older brother, Gisuke, and George Funamoto... Skating has indeed become very popular in our camp, with nearly thirty men participating in the sport." 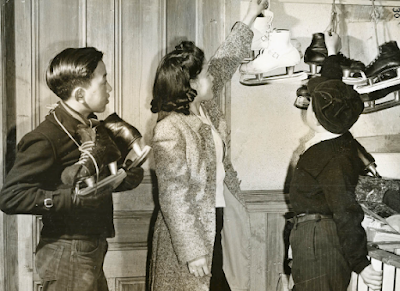 Japanese Canadian detainees in British Columbia selecting skates in 1943. Photo courtesy National Film Board of Canada, Library and Archives Canada.
In 1943, twelve young Japanese Canadian men from the Tashme Evacuation Center east of Hope, British Columbia were assigned to work in the forests of Ontario. When they missed their appointment with a National Selective Service officer, it was feared that they'd escaped. They'd simply gone skating on a nearby pond.

In the fifties, Canadian figure skating was about as white as you can get. Some skating clubs had decades old policies that denied membership to would-be skaters that didn't already know someone who was a member. These policies were a convenient excuse for club officials to turn down Jewish people, people of colour and people of Asian heritage.
One of the very, very few Asian Canadian skaters to compete in the fifties was young Tazuko Oishi. She placed a disappointing fourteenth in the novice women's event at the Western Canadian Championships in Trail in 1955 and never made it to the Canadian Championships. She and her friends Asako Sasaki and Miyoko Chiba skated out the Vernon Figure Skating Club in the Southern Okanagan valley of British Columbia.

Nearly a decade later, a small group of very talented young Canadians of Japanese ancestry burst onto the scene and made history as the first Asian Canadians to compete at the national level. The first was Hamilton, Ontario's Janice Maikawa. She made her first appearance at the Canadian Championships at the age of thirteen in 1967, placing eleventh in the junior women's event. Two years later, she won the Western Ontario senior women's title. At the 1971 Canadian Championships, she placed eighth in the senior women's event and second in novice pairs with her partner Reid MacDonald. In 1972, she placed fourth in junior pairs and sixth in the senior women's event. A wiz in school figures, she placed second to Karen Magnussen in the first phase of the competition that year. Had it not been for a disappointing free skate, she would have made the Olympic team. Janice's expertise in figures was a juxtaposition to Sarah Kawahara's brilliance in free skating. 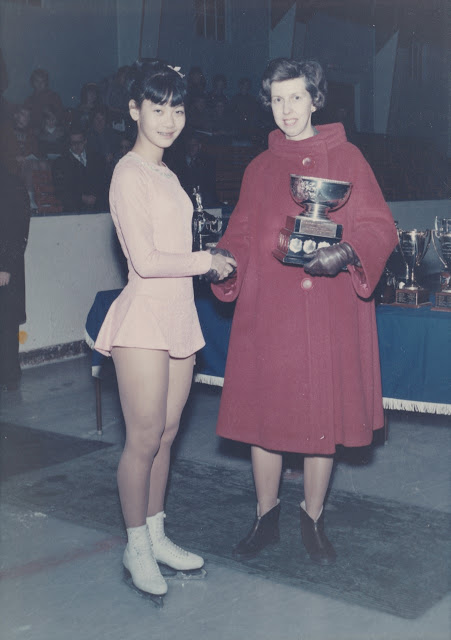 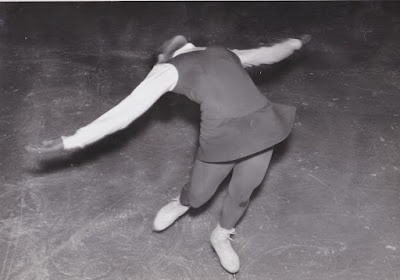 A precocious and brilliantly artistic free skater, Sarah Kawahara was Osborne Colson's star pupil. He coached her from her second figure test to her Gold figure, free and dance tests and the senior ranks at the Canadian Championships. Sarah recalled, "Janice Maikawa and I were good friends back in the day. She had great school figures. Mary Jane Halsted was our figure coach. I used to go out to Hamilton and stay with Janice’s family. Mary Jane would pick us up and take us to Guelph Summer School. My coach Osborne Colson would go to Banff, Alberta in the summer and he wanted me to study with Mary Jane for a couple summers. In those days I was not aware of any barriers. I loved to skate and my parents were willing to get me to the rinks. Osborne Colson was my driving force and inspiration. I was always in the minority in everything I did. I studied ballet at the National Ballet. My Mom would take me on the bus and subway to class. I was the only Asian in the classes at the time. Same with drama class. I was one of two Asian kids all the way through high school at Forest Hill Collegiate. I never really thought much about it. Being an only child I was fortunate that my parents gave me every opportunity to learn related arts, like piano, drama, ballet. My parents were evacuated inland from British Columbia to Montreal where they met. I was born in Montreal. We moved to Toronto when my Dad was transferred while working for Procter and Gamble's TEK HUGHES brushes."

Charlene Wong of Pierrefonds, Quebec made history in 1983 as the first Asian Canadian skater to win a medal at the senior level at the Canadian Championships. A wonderful all-around skater, Charlene won the figures at Canadians at both the junior and senior level and worked with Sandra Bezic to showcase her artistic side, always showing up at events with well-packaged programs and consistent jumps. She made history again in 1988 as the first Asian Canadian skater to compete at the Winter Olympic Games. Like Sarah Kawahara, Charlene arguably made her most important contributions to skating as a professional. She won the U.S. Open professional title in 1990, toured with Jayne Torvill and Christopher Dean and coached Mirai Nagasu to the U.S. junior and senior titles in consecutive years.

At the age of fourteen, Netty Kim made history as the first Asian Canadian winner of the Canadian junior women's title in 1991. Four years later in Halifax, the pre-optometry student from the University of Waterloo became the first skater of Asian heritage to win the senior women's crown. She was the daughter of Korean immigrants who ran a convenience store in North York.
An Asian Canadian woman didn't win the Canadian novice women's title until 2007. The winner that year was Rika Inoda of the North Shore Winter Club. Two years prior, Japanese born Utako Wakamatsu made history as the first Asian Canadian skater to win a medal in senior pairs at Canadians with her partner Jean-Sébastien Fecteau. 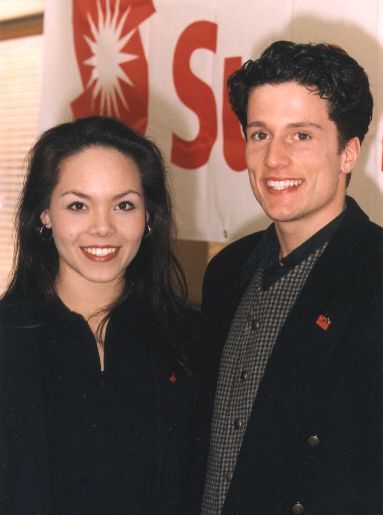 Megan Wing and Aaron Lowe teamed up in 1986. Megan became the first ice dancer of Chinese descent to win a medal at the Canadian Championships in both junior (1994) and senior (1997).  Megan and Aaron reigned as one of Canada's top dance teams for a decade, winning an incredible ten consecutive senior medals at Canadians and representing their country at six Four Continents Championships, five World Championships and the 2006 Winter Olympic Games in Torino. Today, they are without a doubt two of Canada's absolute best ice dance coaches and in 2011, they worked with Nam Nguyen, the talented young son of Vietnamese immigrants, who went on to win his first of two Canadian titles in 2015. Megan recalled, "Back in 1990 at our first Nationals in novice there weren't many Asian Canadian ice dance teams and very few Asian dance teams on the world scene in general. It did feel a little lonely out there at the beginning! Gradually this changed and today's ice dance scene looks much different and is far more inclusive. I hope that the cultural diversity of competitive dance continues to broaden."

Moncton, New Brunswick's Hugh Yik accomplished a series of historic firsts in 1997 and 1998, when he became the first Asian Canadian skater to win the novice and junior national titles in successive years. Ottawa born Patrick Chan repeated Yik's novice/junior feat in 2004 and 2005 and became the first man of Asian descent to win the Canadian senior men's title in 2008. Patrick, of course, went on to win three Olympic medals, three World titles and three Four Continents titles.

While Canadian skaters of Japanese, Chinese and Korean heritage may be very well represented at the elite level now, it's important to recognize that it absolutely hasn't always been this way - and that diversity is something always worth celebrating.

Skate Guard is a blog dedicated to preserving the rich, colourful and fascinating history of figure skating and archives hundreds of compelling features and interviews in a searchable format for readers worldwide. Though there never has been nor will there be a charge for access to these resources, you taking the time to 'like' the blog's Facebook page at http://www.facebook.com/SkateGuard would be so very much appreciated. Already 'liking'? Consider sharing this feature for others via social media. It would make all the difference in the blog reaching a wider audience. Have a question or comment regarding anything you have read here? Have a suggestion for a topic related to figure skating history you would like to see covered? I'd love to hear from you! Learn the many ways you can reach out at http://skateguard1.blogspot.ca/p/contact.html.
Posted by Skate Guard Blog at May 12, 2022
Email ThisBlogThis!Share to TwitterShare to FacebookShare to Pinterest
Newer Post Older Post Home