A Mélange Of Reader Mail

It's once again time to unpack the mail bag, answer some of your questions and share some of the interesting e-mails and social media messages that have come my way over the last few months. As always, if you have a question you'd like me to tackle or feedback on a blog please reach out via e-mail.
READER QUESTIONS 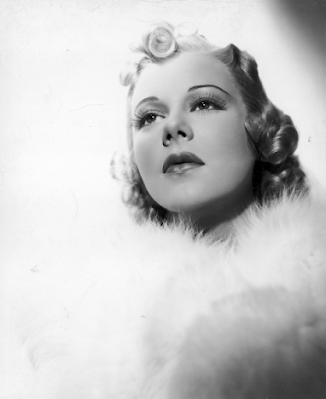 Sonja Henie. Photo courtesy National Archives of Poland.
From Marisa (via e-mail): "Do you happen to know where I can find books about Sonja Henie?"
A: A great place to start would be at your local library. If they don't have any in their own collections, they may be able to obtain a copy through inter-library loan for low or no cost. Another option would be buying books on EBay, Biblio.com, AbeBooks.com or Thriftbooks. EBay, Biblio and AbeBooks have booksellers around the world. Thriftbooks is U.S. based, but their shipping costs are often times more reasonable than the others. "Wings On My Feet" and "Queen Of Ice, Queen Of Shadows" would be two books to look out for, but there are also some great write-up's on her in several other books. 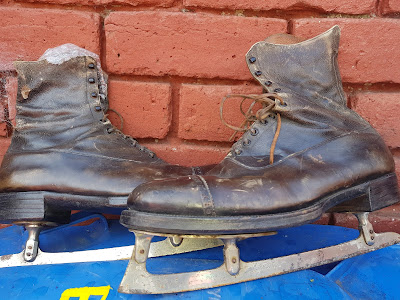 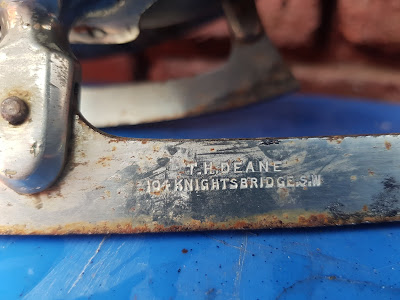 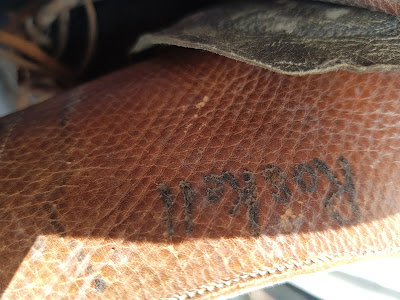 From John (via e-mail): "Hope you don't mind after reading your interesting site I thought you would be the ideal person for me as I'm seeking advice on these Edwardian? skates I picked up. I have attached a few picks for you too as may be of interest to you. I'm looking for knowledge and also to sell. I know they are plenty of skates around but these have some makers mark on the blades and also probably not relevant but a name in each on the inside, I would say around size nine."
A: I'm not sure if I'm the best person to help. I do write about figure skating history but skate design isn't something that I really look at very much. I do know T.H. Deane & Co. skates would have been popular during the Edwardian era. They were manufactured in Knightsbridge during the heyday of Prince's Skating Club and used by many skaters during that period. I can't quite make out what the name written on the inside says?
From @hughster3 (via Twitter): "I read your blog on Norton Skate, thanks for that, and wondered if you had any more info about skaters and placements. I recall Johnny Esaw saying that Gary Beacom blew them away. Would love to see a full list of results if available."
A: The full results for Norton Skate (a.k.a. Flaming Leaves) were published in the October 1979 issue of "Skating" magazine. Lots of big names! 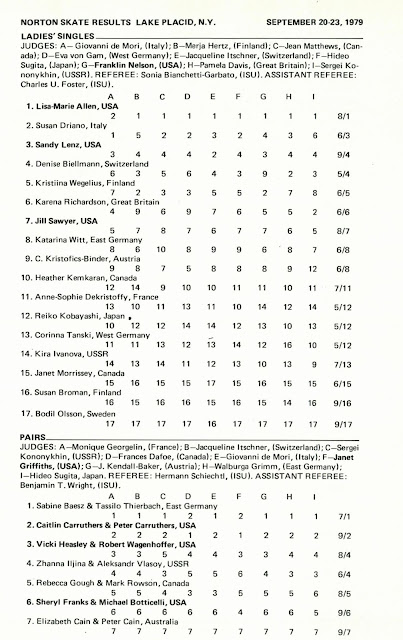 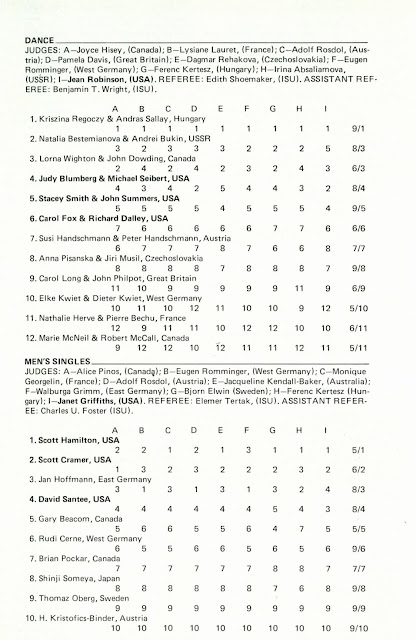 Photos courtesy "Skating" magazine
From Andrea (via e-mail): Do you happen to have anything on Granville Mayall from Vancouver?
A: I don't have a ton of material on Mr. Mayall unfortunately, aside from his obituary from the "Vancouver Sun". I do know he grew up South Vancouver in a working-class Methodist family. He was an important figure in the development of skating in British Columbia in the 1920's and 30's, a judge at the Canadian and North American Championships and the CFSA's President from 1959 to 1961. He was the team leader for figure skating at the 1960 Olympics in Squaw Valley and played an important role in the organization of the 1960 Worlds in Vancouver. He was a senior partner in the law firm Mayall and Dallas and a freemason. He passed away on February 2, 1963 at the age of fifty-seven and was posthumously inducted into the CFSA (Skate Canada) Hall Of Fame in 1992. Hope this helps a little! 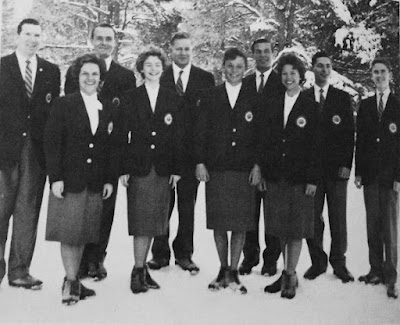 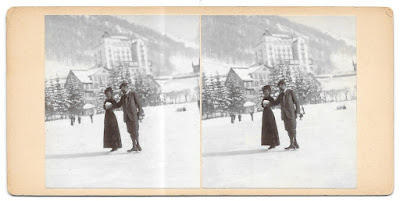 From Andy (via e-mail): "Thanks to your great site I was able to identify one of the stereoviews attached as being taken at Prince's, London, I estimate 1910 or so. The other, the outdoor skaters, I haven't yet ID'd.... does that building in the background look familiar to you at all? All of the stereoviews I've identified in the lot where these were found are London, but the hill or mountain in the outdoor scene makes that location unlikely. I'd appreciate any thoughts you have on the stereoviews."
The first stereoview is definitely Prince's Skating Club at Knightsbridge during the Edwardian era. The latter looks like it may (?) be Elsa Rendschmidt but I'm terrible at identifying locations in photos - perhaps a skating resort in Switzerland? If anyone has a keen eye and has any suggestions or information about the second stereoview, let me know and I will pass on the message to Andy.
FIGURE SKATING BOOKS IN THE WORKS 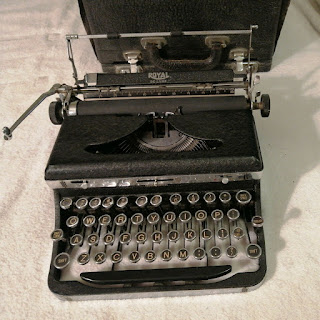 Over the past year, I've learned of several very interesting books that are in the works. One is a historical fiction novel based on the story of Alois Lutz - inventor of the Lutz jump. The other an autobiography of World Champion Courtney Jones. I recently did an interview with Helen Cox about the latter book. Stay tuned for more information about these projects!
Skate Guard is a blog dedicated to preserving the rich, colourful and fascinating history of figure skating and archives hundreds of compelling features and interviews in a searchable format for readers worldwide. Though there never has been nor will there be a charge for access to these resources, you taking the time to 'like' the blog's Facebook page at http://www.facebook.com/SkateGuard would be so very much appreciated. Already 'liking'? Consider sharing this feature for others via social media. It would make all the difference in the blog reaching a wider audience. Have a question or comment regarding anything you have read here? Have a suggestion for a topic related to figure skating history you would like to see covered? I'd love to hear from you! Learn the many ways you can reach out at http://skateguard1.blogspot.ca/p/contact.html.
Posted by Skate Guard Blog at September 02, 2021
Email ThisBlogThis!Share to TwitterShare to FacebookShare to Pinterest
Newer Post Older Post Home
"As a rule an author has one or two popular ways of contrasting the past with the present. He can treat the past as lying in comparative doleful ignorance, or he can explain that the past was infinitely superior to the day we live in. Of course, either method is the popular journalism of the moment, and in reality there is no sharp contrast, but a gradual transition which leads the past into the present." - Joel B. Liberman, Skating Club Of New York