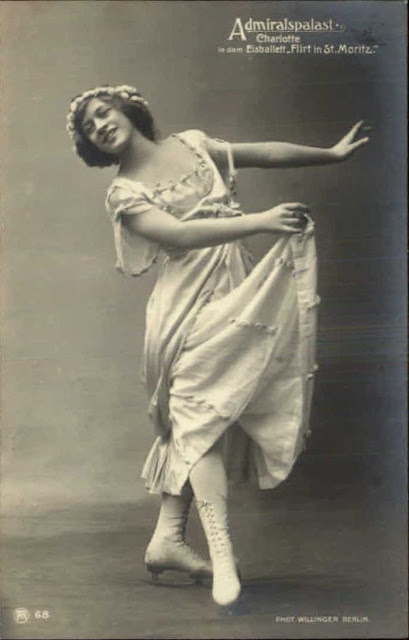 "When I was a child in 1910 I already skated this new style and [at] twelve years I jumped already the Axel and Axel Paulsen himself saw me do it...." - Charlotte Oelschlägel in a letter to Dr. Arthur N. Foxe, January 29, 1968

If the word Admiralspalast rings a bell, it is with good reason. Early in the twentieth century, the Berlin venue played host to a series of highly popular Eisballets. They starred none other than the famous German professional skater Charlotte Oelschlägel, then only a teenager, who later went on to become a sensation in New York City in the Hippodrome's lavish ice shows. Today on the blog, we are going to delve a little deeper into the stories and scandals surrounding these productions. 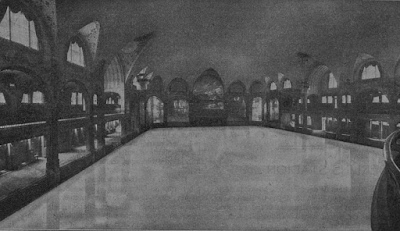 Founded in the latter half of the nineteenth century, Berlin's Admiralsgartenbad was first home to a swimming pool, salon, over sixty baths (first and second class), two electric baths, a Russian steam bath and forty one brine baths. In 1910, the facilities were expanded by The Admiralspalast Aktien-Gesellschaft. Architects Heinrich Schweitzer and Alexander Diepenbrock added a cafe, 'Japanese salon', cinema, restaurants, ice arena and public baths to the Admiralspalast facilities, making the venue a 'one stop shop' for Berlin residents and visitors to the city. Not long after the 30 X 60 ice arena opened in April 1911, German impresario Leo Bartuschek set to work scouting talent for a series of Eisballets, which provided entertainment to diners seating around the rectangular ice surface.

Among Bartuschek's Eisballets were "Montreal, the Town on Skates", "Magic Of The Alps", "Yvonne", "Alpen Zauber", "Frau Fantastie", "The Merry Doll", "Abrakadabra", "Die Roten Schuhe" ("The Red Shoes") and "Flirt At St. Moritz". Charlotte Oelschlägel was indeed the star of many of these productions, but other skaters in the shows included Ellen Dallerup, Hans White, Alfred Jainczik and Hilda Rückert. The number of skaters who actually participated in these shows varies vastly from source to source. Arthur Goodfellow's 1972 book "Wonderful world of skates; seventeen centuries of skating" claims there were sixty five in the cast whereas "The Sketch: A Journal Of Art And Actuality" in 1914 claimed the cast consisted of "seventy five girls and twenty five men." Howard Bass in his book "This Skating Age" notes that "the late manager of Dundee Ice Rink, Stanley Fryett, an Englishman who truly lived for skating, became a professional at the Admiral Palast at that time and has told me that ["Flirt At St. Moritz"] was well worthy of its historic importance that there were more than a hundred performers in the original Berlin cast." In stark contrast numbers wise, Jacqueline du Bief, in her book "Thin Ice" wrote that "Mr. Hans White, who was for a long time the star of the company, tells us that ballets were presented regularly by a permanent company of fifteen to eighteen professional skaters. He also tells us that the company even had its hired supporters of whose applause the artistes could be assured on payment of five marks a month." The varying numbers - from fifteen to over one hundred - may well be explained by the fact that there were multiple Eisballets which would of course had different casts. 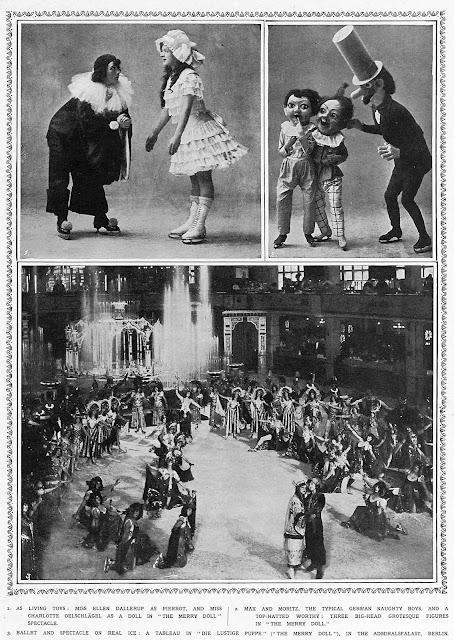 The historical record does tell us that these shows were indeed very well attended, with up to a thousand spectators sometimes present for the suppertime skating soirees. Nic Leonhardt, in the 2013/2014 issue of "The Passing Show", the newsletter of The Shubert Archive, noted that "Flirt In St. Moritz" was "directed by Leo Bartuschek with music by Julius Einödshofer, choreography by B. Bernar, and costumes from the workshop of Hugo Baruch & Co., it is considered to be the first ice ballet with a plot. Its simple story allowed for various physical effects on stage, while the diverse cultural backgrounds of the characters provided an excuse for the display of colorful costumes and representations of national stereotypes. The main character was Kitty Goldberg, the young and beautiful widow of an American millionaire, who travels to St. Moritz, Switzerland. There she meets Oti, a Japanese Marquis, and Oluf Jacobsen, a Norwegian sportsman, who both fall for her – the American socialite becomes the talk of the town. The show was a huge success. Picture postcards featuring characters and scenes from the ballet were used for promotion and are still in great demand by collectors on both sides of the Atlantic." 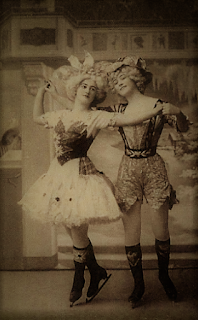 The writings of American author and humorist Irvin S. Cobb provide an extremely rare primary source glimpse into what it would have been like to have been in the audience at the Admiralspalast watching one of Bartuschek's Eisballets. In 1914, he wrote "in the Friedrichstrasse there is another place, called the Admiralspalast, which is even more attractive. Here, inclosing a big, oval-shaped ice arena, balcony after balcony rises circling to the roof. On one of these balconies you sit, and while you dine after after you have dined you look down on a most marvellous series of skating stunts. In rapid and bewildering succession there are ballets on skates, solo skating numbers, skating carnivals and skating races. Finally scenery is slid down on runners and the whole company, in costumes grotesque and beautiful, go through a burlesque that keeps you laughing when you are not applauding, and admiring when you are doing neither; while alternating lightwaves from overhead electric devices flood the picture with shifting, shimmering tides of color. It is like seeing a Christmas pantomime under an aurora borealis. In America we could do these things - at least we never have done them. Either the performance would be poor or the provender would be highly expensive, or both. But here the show is wonderful, and the victuals are good and not extravagantly priced, and everybody has a bully time." 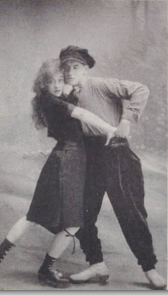 The success of these shows translated into plans for a massive 'ice palace' that was modelled after the Admiralspalast to open in New York City. Irving Brokaw, The Shubert's and Frank J. Godsoll were all involved in the planned project but it never came to fruition. Instead, Bartuschek and much of the Eisballet's cast, including Charlotte and Ellen Dallerup became stars in New York City" when "Flirt In St. Moritz" became "Flirting In St. Moritz" and took the Hippodrome by storm. However, that's not where the story ends. Not even close. As Charlotte wowed with her thrilling Axel's and signature spiral, scandal brewed behind the scenes of the Hippodrome shows. By scandal, I mean that Bartuschek almost had the Lederhosen sued off him. "Variety" on June 2, 1916, reported that "Marietta Lorette Lorens, through her attorney, Nathan Burkan, has secured a judgment of $1,146 against Leo Bartuschek, of Berlin, owner of the ice ballet at the Hippodrome the past season. The action was started against Barthuschek when Miss Lorenz did not receive her salary of $400 per month after January 15. Bartuschek received $1,500 per week for the company and contracted with the plaintiff to manage it at the above-mentioned salary. Bartuschek claims that his contract ran out Jan. 15, and Miss Lorenz was employed in the Hippodrome thereafter, and should look to it for salary."

Meanwhile in Germany, Eisballets continued to be held at the Admiralspalast for a time in Bartuschek and Charlotte's absence, but things weren't going so well there either. The Bendigonian on June 14, 1917 reported that "an instructive sidelight is thrown on the Teutonic character by a story which is told in the Berlin 'Vortwarts': The management of the Admiralspalast (a well-known Berlin music hall) engaged a number of young girls who were to figure on the stage as 'skating artists'. Their pay was to be twenty marks a week. Herr Wagner, the manager of the hall, must imagine that a girl who can maintain herself in the present state of things on that sum is not only a 'skating artist,' but also an artist in starvation. When three of these tried to convince him of the impossibility of living on such a wage he coolly observed, 'What of that? You are good-looking girls... and you will doubtless find additional means of adding to your income.' The girls thereupon brought an action against Wagner on the charge of 'offensive suggestions.' The Trades Court, in giving judgment, held that while the charge of 'offensive suggestion' appeared to be well founded, the complainants, having signed a contract with their employer, were duty bound to carry it out on the terms agreed upon. They were, moreover, condemned to pay the costs of the action. These unfortunate girls will therefore be driven to the necessity of setting aside a sum of money from their wretched stipend to pay their employer's legal expenses, besides their own. If they are further forced by grim want to adopt Herr Wagner's infamous suggestion, the responsibility will lie heavily on judge who tried their action." No word on how those unnamed German figure skaters made out, but chances are they had bigger worries in their lives to contend with by the end of World War I.

There is indeed evidence of the continued existence of the Admiralspalast ice rink after World War I.
The "Wiener Salonblatt" notes that the German Ladies Figure Skating Championship was held in the indoor skating venue in 1919, with Elaine Winter taking top honors ahead of Margarete Klebe. Incredibly, you can still go to the Admiralspalast, once home to Charlotte's famous Eisballets, today.
With echoes of Eisballets past resounding in its walls, the space reopened as a theatre in 2006.

Skate Guard is a blog dedicated to preserving the rich, colourful and fascinating history of figure skating and archives hundreds of compelling features and interviews in a searchable format for readers worldwide. Though there never has been nor will there be a charge for access to these resources, you taking the time to 'like' on the blog's Facebook page at http://www.facebook.com/SkateGuard would be so very much appreciated. Already 'liking'? Consider sharing this feature for others via social media. It would make all the difference in the blog reaching a wider audience. Have a question or comment regarding anything you have read here or have a suggestion for a topic related to figure skating history you would like to see covered? I'd love to hear from you! Learn the many ways you can reach out at http://skateguard1.blogspot.ca/p/contact.html.
Posted by Skate Guard Blog at July 22, 2016
Email ThisBlogThis!Share to TwitterShare to FacebookShare to Pinterest
Newer Post Older Post Home